The Enterprise 2022 Reader Poll: The Results

The Enterprise Reader Survey says? 2021 was a very good year (cue Sinatra): It seems that last year was a good year to do business here and optimism is the prevailing sentiment as we push ahead with 2022, the results of our 2021 end-of-year survey showed. Despite the emergence of the delta and omicron variants, supply chain disruptions, and surging commodity prices, a whopping three-quarters of all respondents said that 2021 was good for business. This is significantly higher than the 42% who expressed optimism in 2020, when we last posed the question, reflecting the post covid recovery we saw on the macro front last year. Seriously, what a difference two years make. 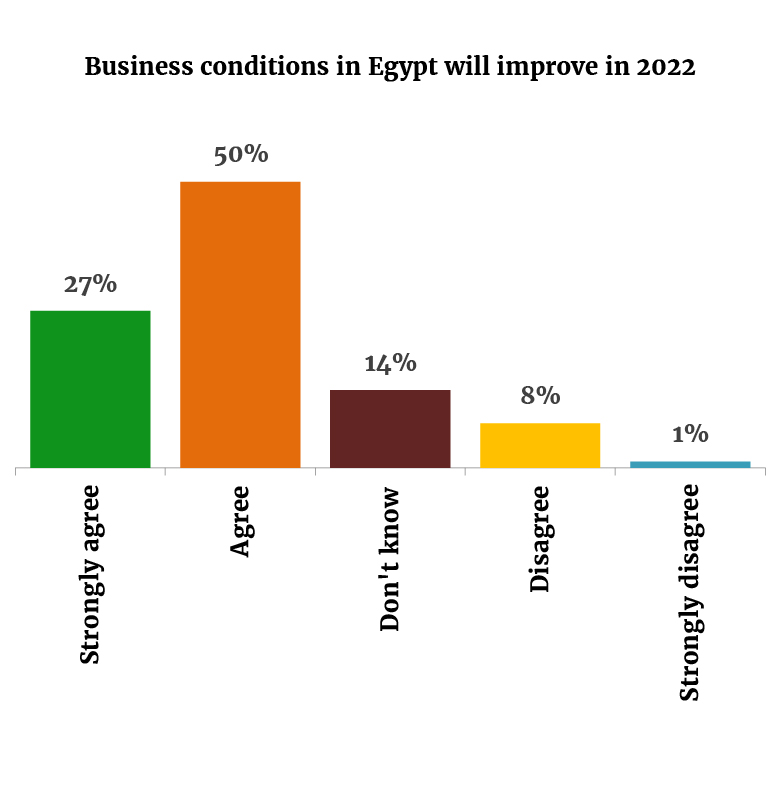 You are even more optimistic about 2022, with 77% of respondents saying that business conditions will improve this year. Even when looking at those who are not breaking out the champagne, we see more people unsure of how the year will go (14%) than those who see the year turning sour (9%). 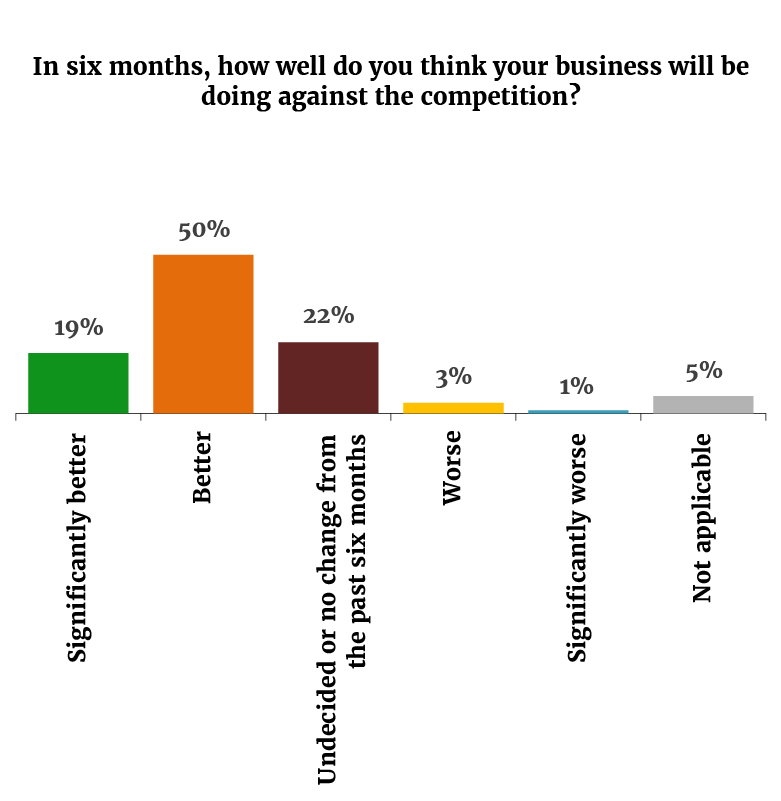 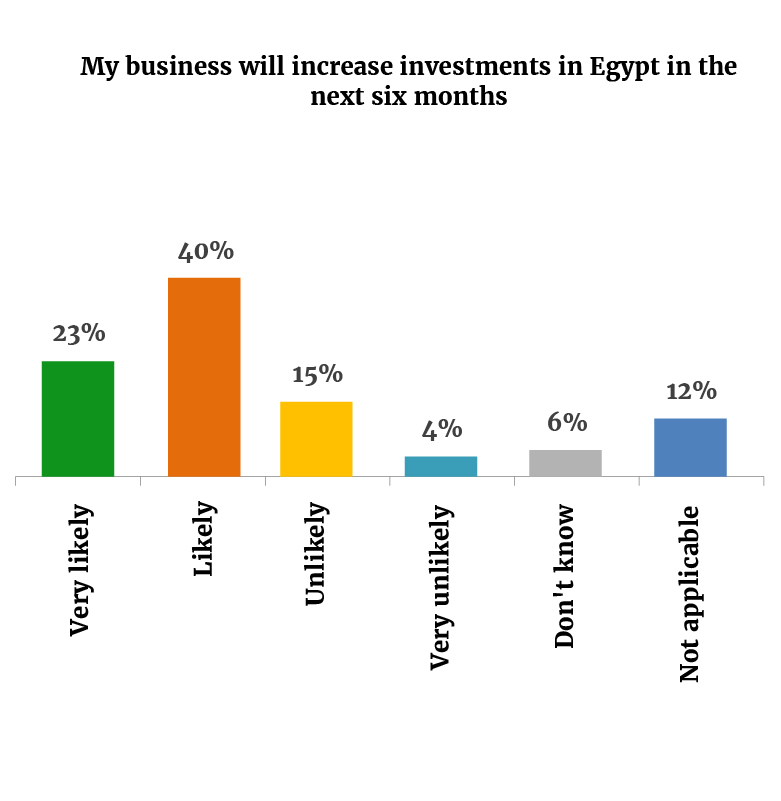 Most of your companies are even planning on some CAPEX spending in 2022: 63% of you believe it is likely that your business will increase investments in Egypt in the next six months, up from only 25% when the pandemic first started. 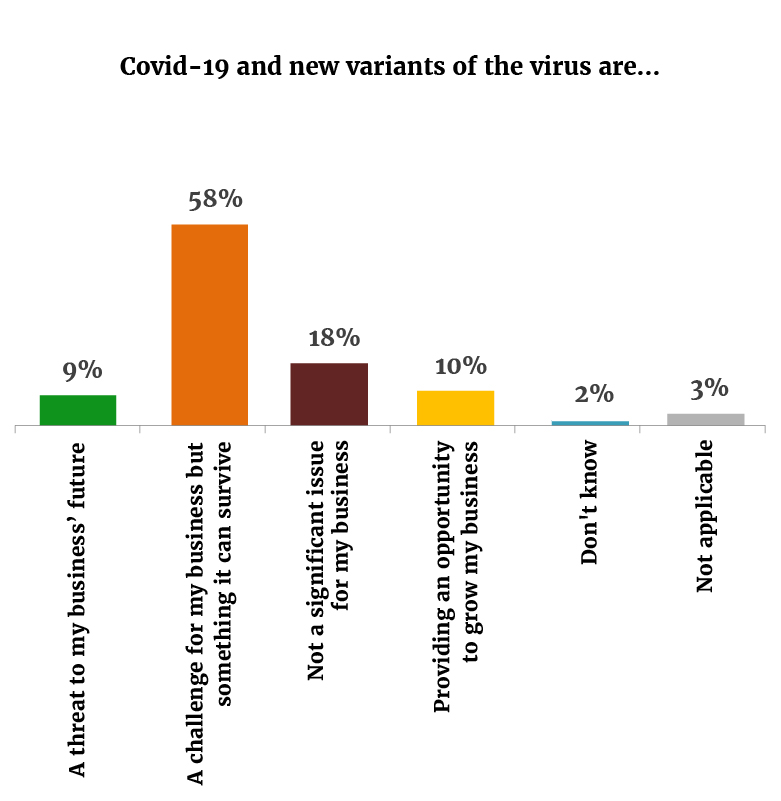 Covid who? Having gone through the pains of the pandemic in 2020 and 2021, we appear to have gained some resilience and are less afraid of covid. Eighteen percent of respondents don’t see the pandemic and its new variants as a significant issue to their business, up from 10% back in 2020. A full 10% see covid as an opportunity — up from only 4%. The majority (58%) feel that the pandemic remains a challenge, but that their businesses can overcome it.

Nothing to fear but fear itself: Only 9% of you feel that covid and new variants such as omicron present a clear threat to your business’ future, down from 17% back in 2020. 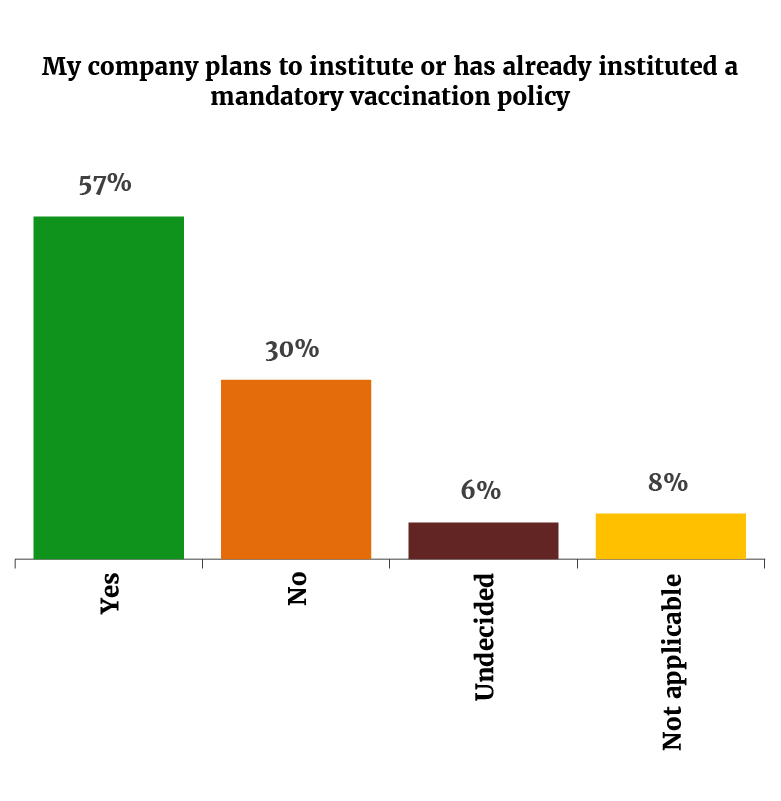 …And that’s because you’ve been proactive about jabs: 57% of respondents say that their company plans to institute or has already instituted a mandatory vaccination policy, in line with government efforts to get everyone vaccinated. This is in stark contrast to last year, where a majority of companies we spoke with said they were simply encouraging employees to get the vaccine. That said, a full 30% of respondents say their companies have not or will not make it mandatory to get jabbed. 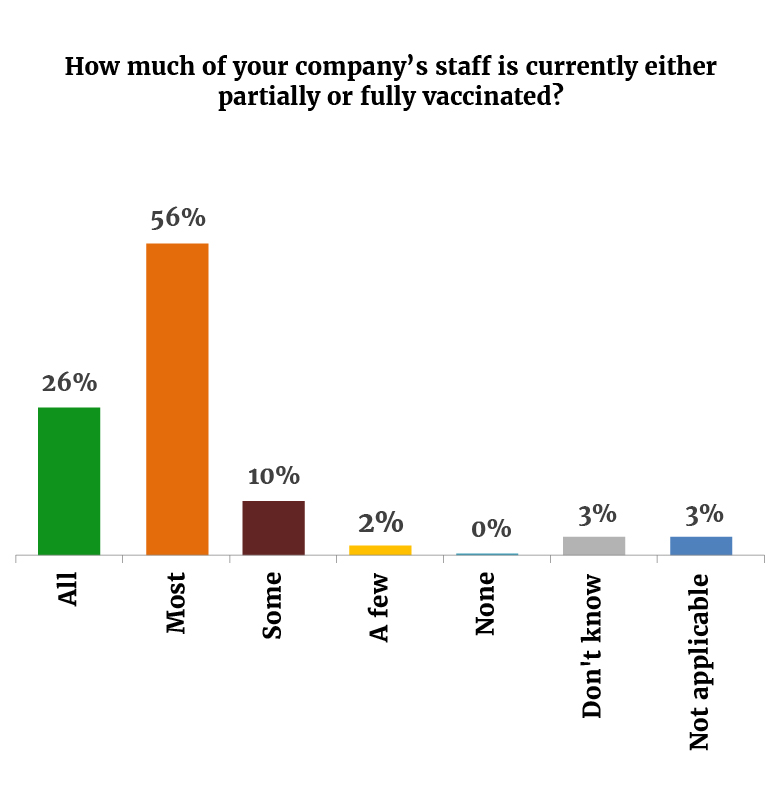 This attitude is showing results, with 92% of respondents saying that at least some of their staff are either partially or fully vaccinated, and a quarter of respondents telling us that all of their staff members are either partially or fully vaccinated. We tip our hats to those companies and would love to hear their stories on how they got it done. 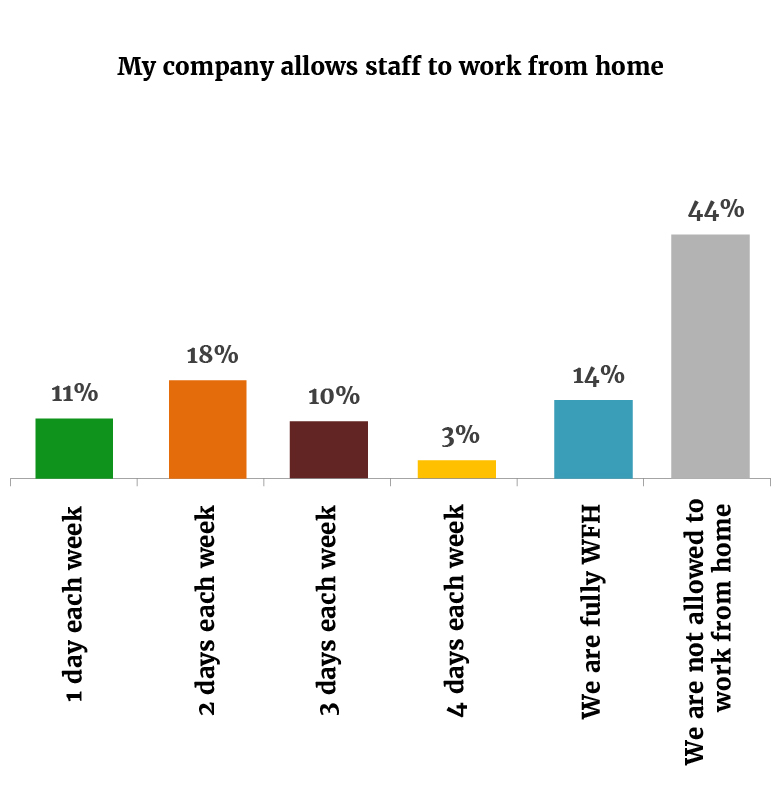 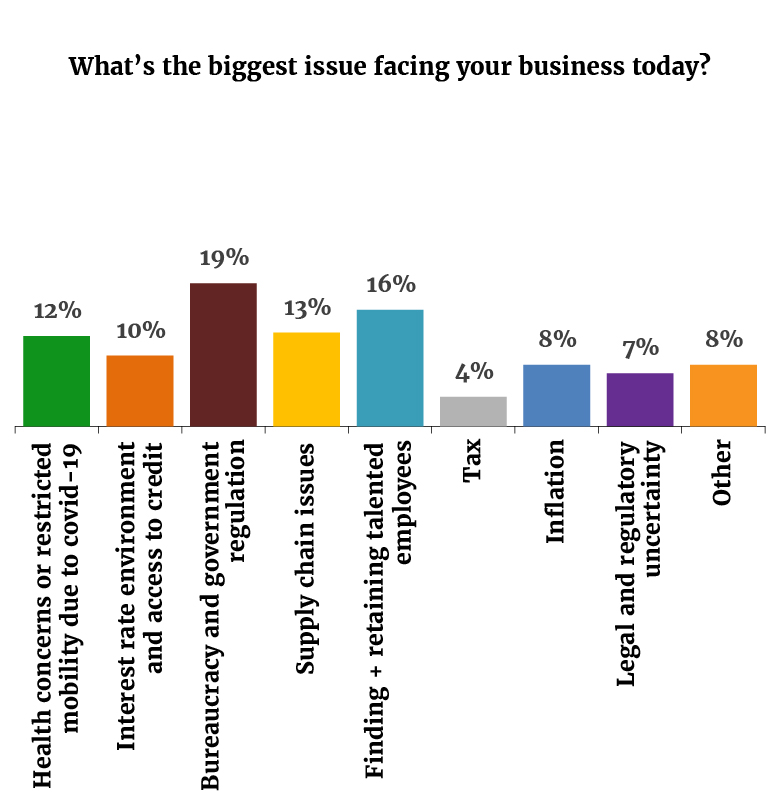 Unsurprisingly, the pandemic doesn’t seem to be as big of an issue facing your business today as it once was. Twelve percent saw health concerns or restricted mobility due to covid-19 as the biggest issue facing their business today, down from 27% over a year ago.

Surprisingly, only 13% of you felt that supply chain issues were the biggest concern facing your business.

The biggest issue facing businesses today, however, appears to be red tape and regulations, with 19% of respondents naming that as the biggest hurdle. That said, 45% of you feel that the Madbouly Cabinet is sympathetic to the needs of business.

This was followed by finding and retaining talent, with 16% polled saying that was the biggest issue, up from only 8% at the beginning of the pandemic. Prior to the pandemic this was a persistent issue among businesses: Staffing topped complaints in 2019 and was the fourth biggest problem back in 2018. 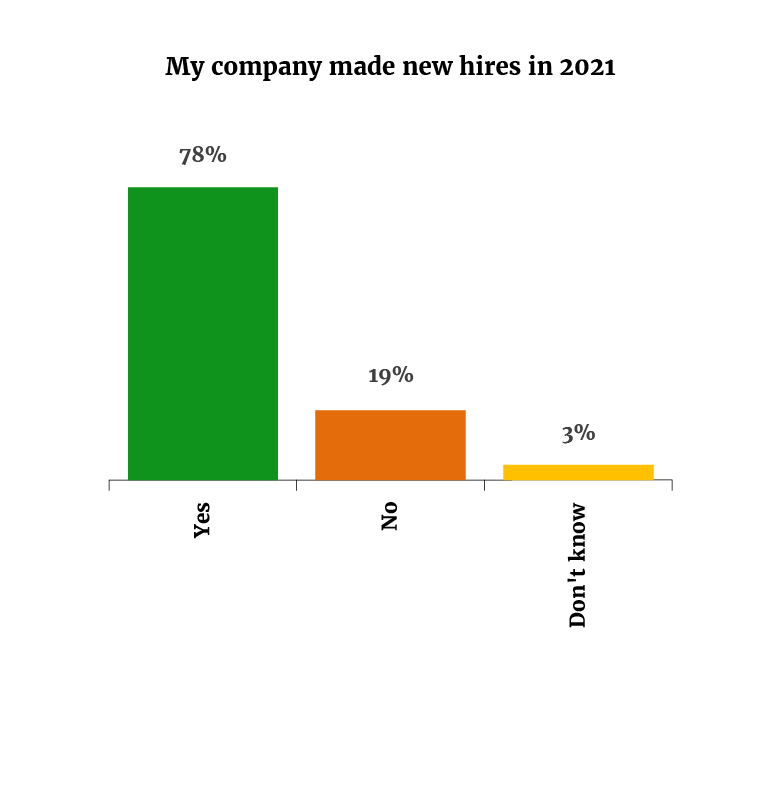 But that hurdle doesn’t seem to have stopped companies from hiring: Seventy-eight percent of survey-takers said their company made new hires in 2021. 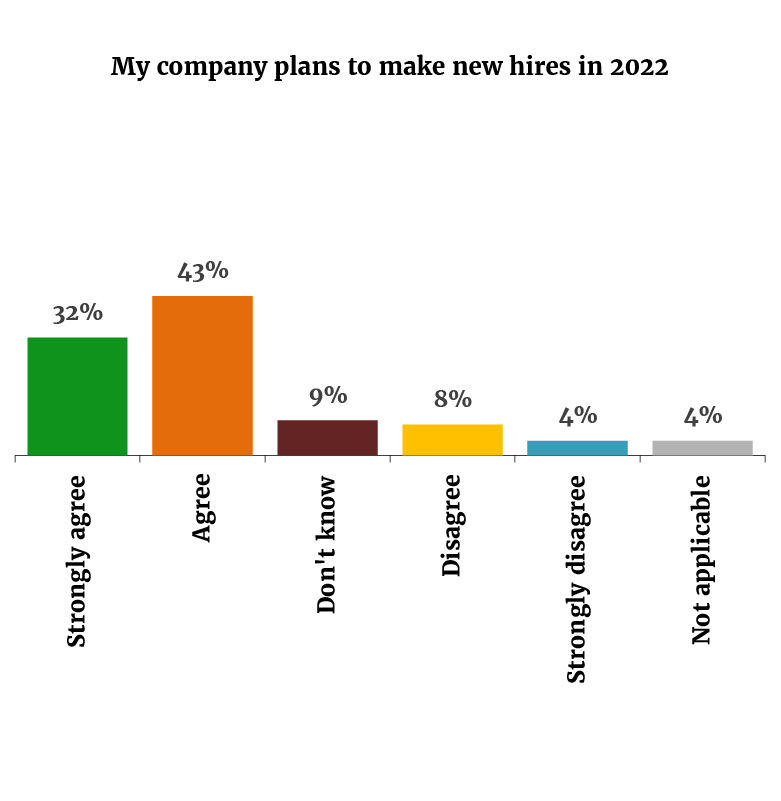 The problem may become acute this year as three quarters of poll takers see their businesses making new hires in 2022. This was not only significantly higher than the 33% back when the pandemic started, but even beat out the 66% who said their companies were hiring pre-pandemic. Only 12% see a hiring freeze in the offing this year. 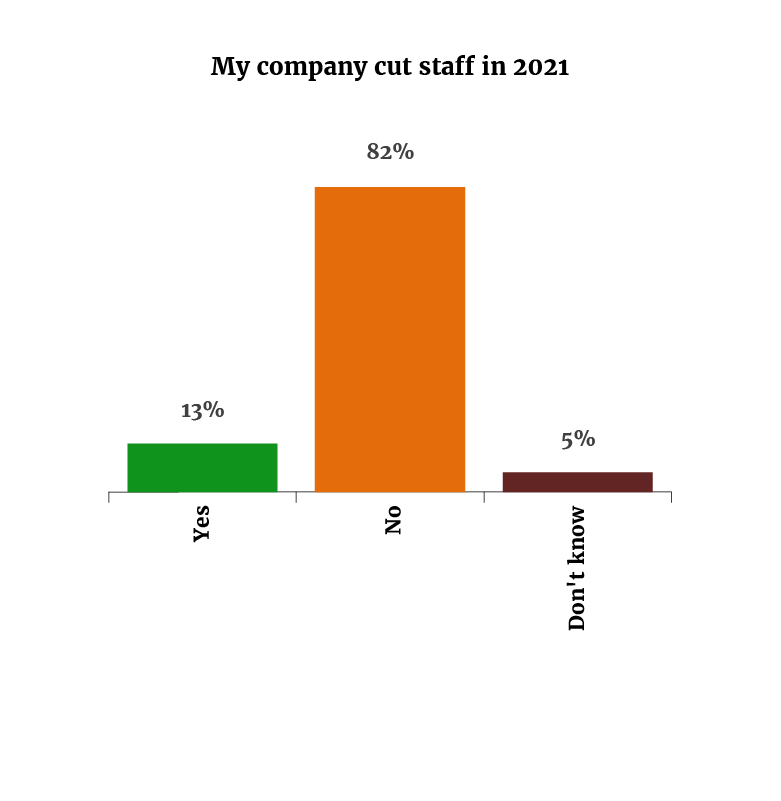 And despite all the aforementioned problems, only 13% of respondents cut jobs in 2021, with 82% retaining their employees all of last year. Nineteen percent of respondents had laid off staff in response to the pandemic when it first emerged. 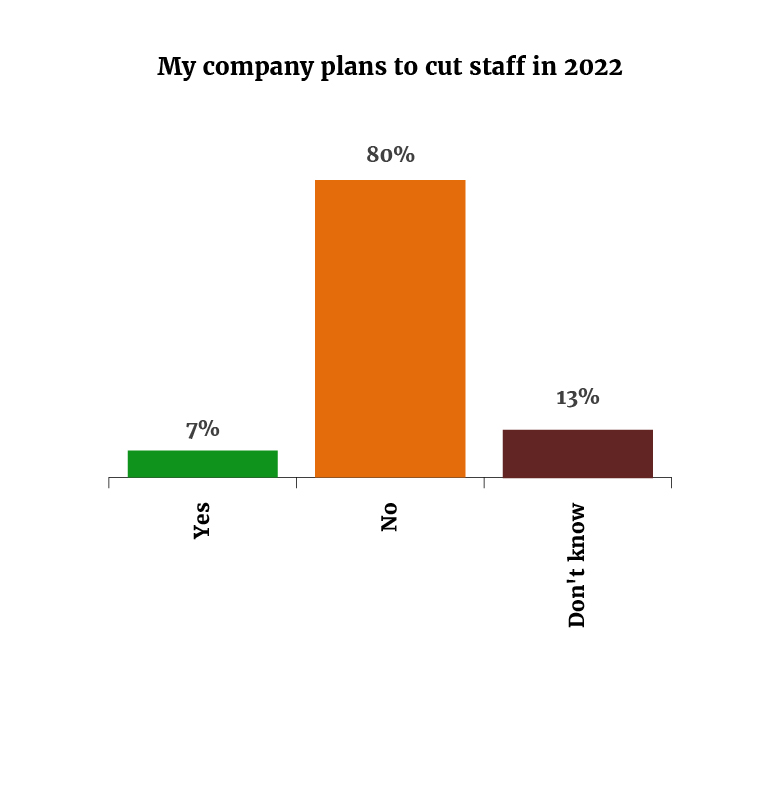 And job cuts look set to decline this year, with only 7% of you expecting layoffs in 2022, down from 26% back when covid first hit us. 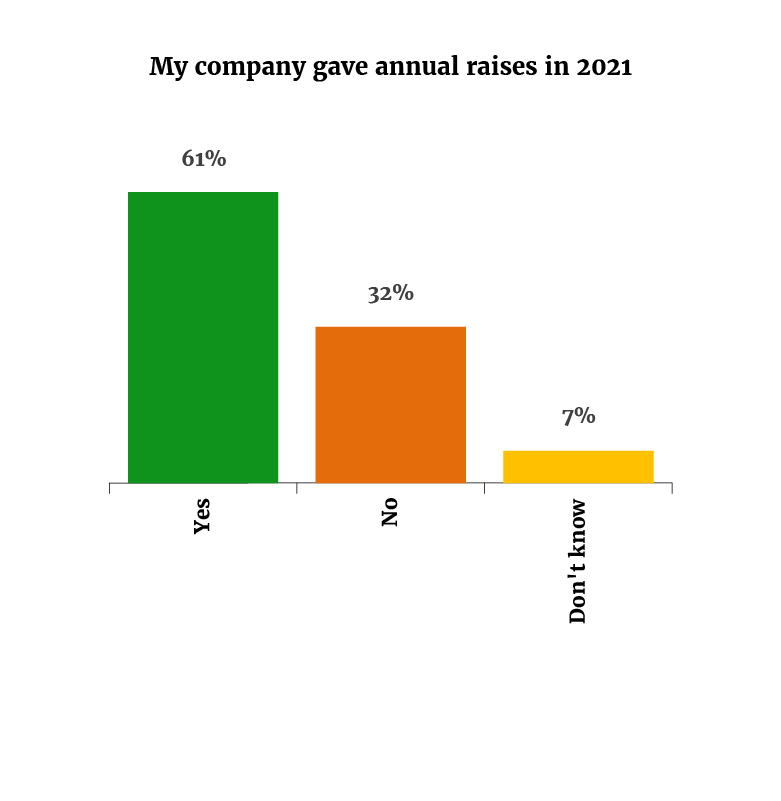 Sixty-one percent of respondents gave out annual raises last year as opposed to 23% who told us they cut salaries two years ago. But despite this, 27% of you feel your companies will need to bump up salaries to comply with the new national minimum wage for the private sector. 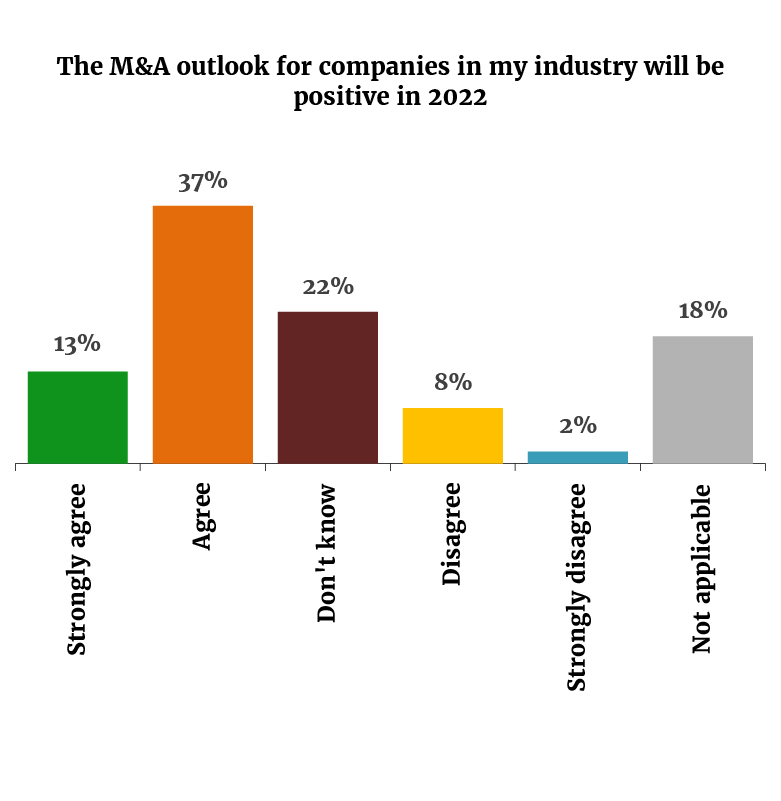 You guys see a lot of consolidation in your industries: Half of you are positive about the M&A outlook in your industry, compared to only 10% who aren’t. 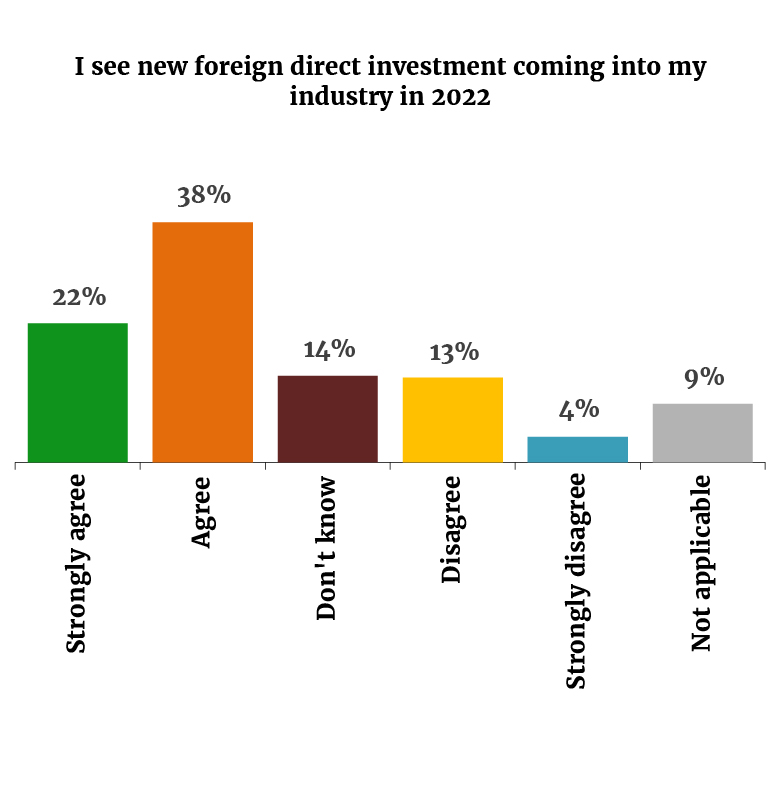 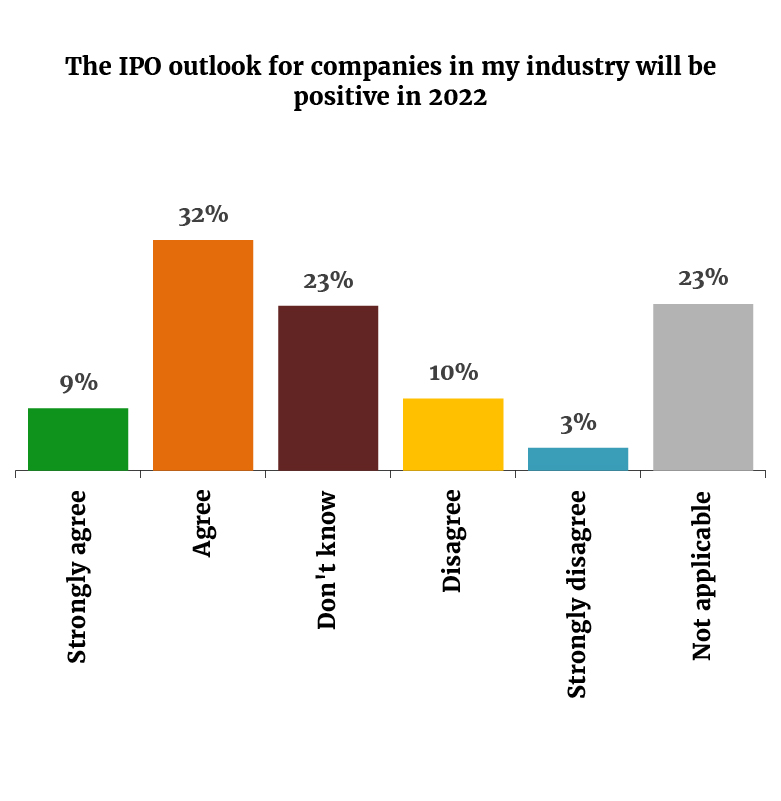 Hope for capital markets and new paper is high: Forty-one percent of readers see an IPO in their industry happening in 2022 — a far cry from the 11% in the last poll. Only 13% of you see no listings this year for your industry.

This positive sentiment could be fueled by regulators signaling that four or five companies could IPO on the EGX this year. Cosmeceuticals giant Macro Group is set to offer up to 45.8% of its shares in a transaction valued at around EGP 3.5 bn before its FRA approval expires on 23 January, though an official timeline has not yet been set. Meanwhile, agricultural and environmental services company Nahr El Kheir is set to see trading kick off in its shares soon.Healthy food brand Abu Auf also has its eye on a 2Q2022 listing, having recently tapped EFG Hermes to quarterback the transaction, while non-bank financial services player Ebtikar could go to market in early 2022. Ghazl El Mahalla Football Club is also offering shares in a micro-IPO.

Not to mention the military firms: Senior officials including Prime Minister Moustafa Madbouly have recently noted the Sisi administration’s plans to sell stakes in a number of military-owned companies. There are 10 military-owned firms the Sovereign Fund of Egypt (SFE) is lining up to attract private capital. Separately, our friends at the SFE are guiding high-level talks on plans to sell stakes in three Siemens-built power plants in a process that could also involve a mix of sales to anchor investors as well as future offerings via public markets. 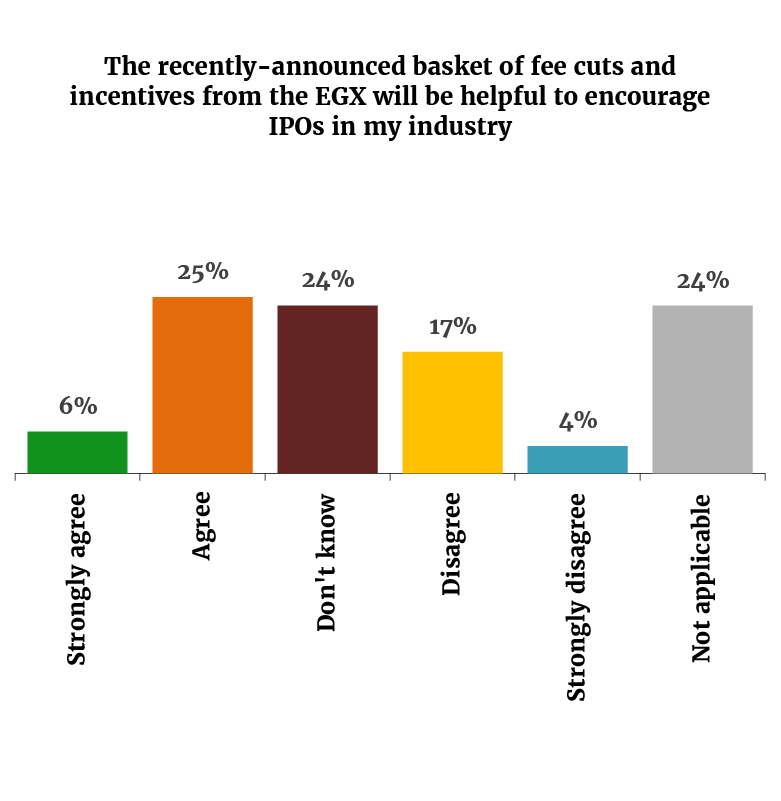 Also fueling this positivity is the basket of fee cuts and incentives announced by the Madbouly Cabinet to shield investors from the impact of the capital gains tax. Some 31% of survey takers feel that this will encourage listings in their industry, as opposed to 21% who feel it won’t have much of an impact. 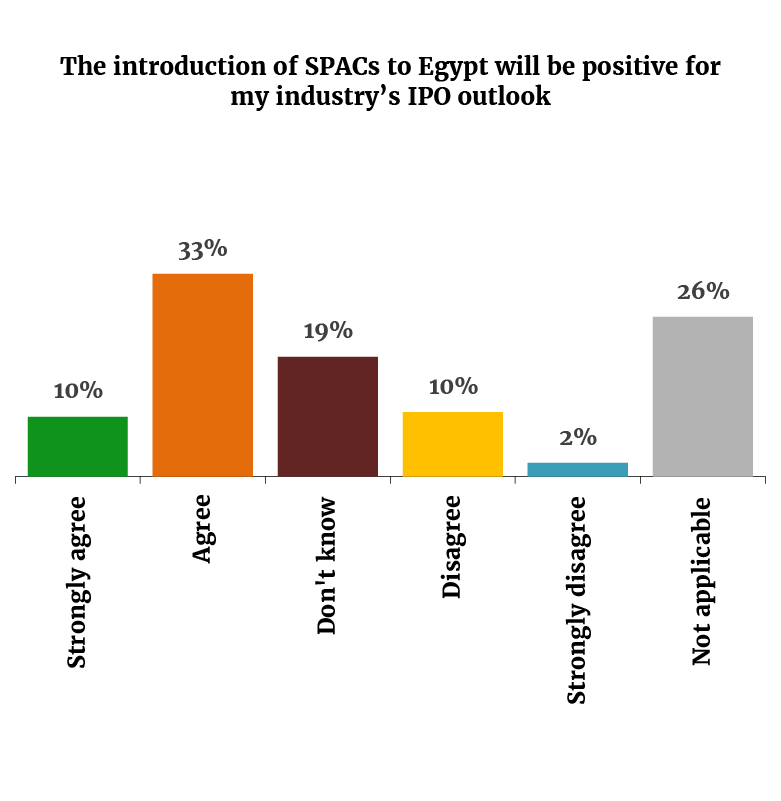 …And the introduction of SPACs: Forty-three percent of polled readers say the introduction of SPACs will help the IPO outlook in their industry, as opposed to 12% who feel it won’t. And this was before Financial Regulatory Authority (FRA) chief Mohamed Omran revealed that we would see our first blank-check company be established within the next month.