ENTERPRISE READER POLL- You’re not cutting salaries — but you’re also not investing, and you definitely want more freedom to WFH in better times. A lot has changed since we last asked our readers for their thoughts and opinions on the Egyptian economy and the outlook for businesses: At the start of the year, you told us of your optimism about 2020, predicting improved business conditions, a spate of new hiring and fresh foreign investment. Fast-forward to June and the outlook for the Egyptian economy has radically changed: The unprecedented scale of the covid-19 pandemic has brought entire industries to a standstill, frozen supply chains at home and abroad, shaken capital markets, and forced hundreds of thousands (maybe mns?) of us to work from the confines of our own homes.

We asked readers in the days before the Eid El-Fitr holiday how they were coping. Here’s what you had to say:

HOW IS COVID-19 AFFECTING OUR COMMUNITY? 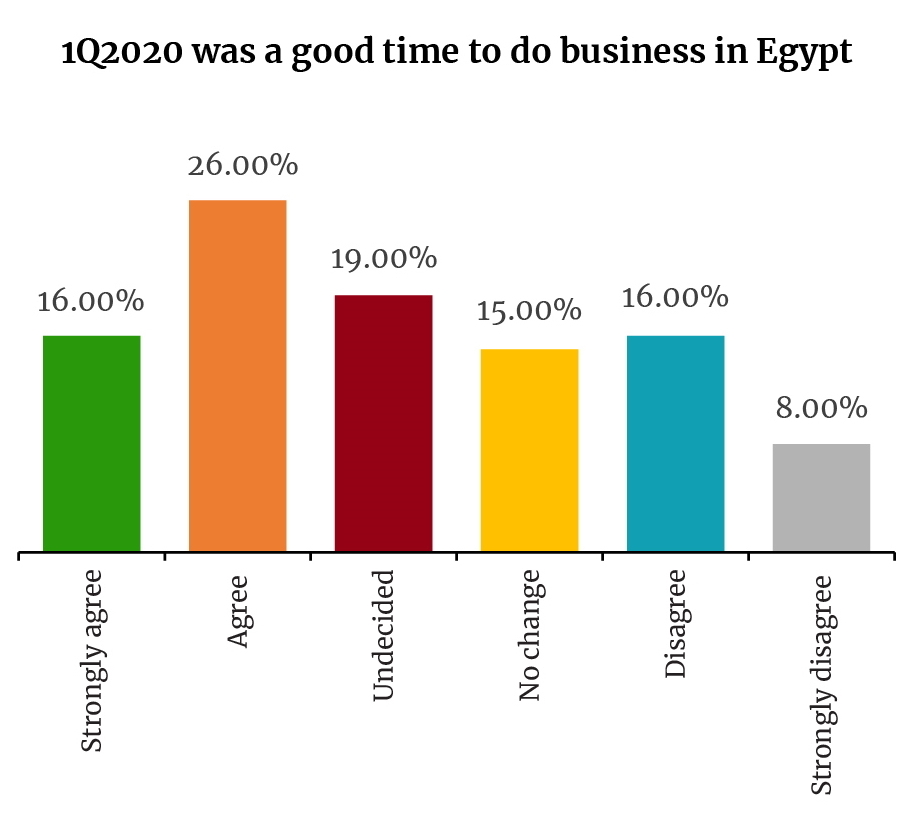 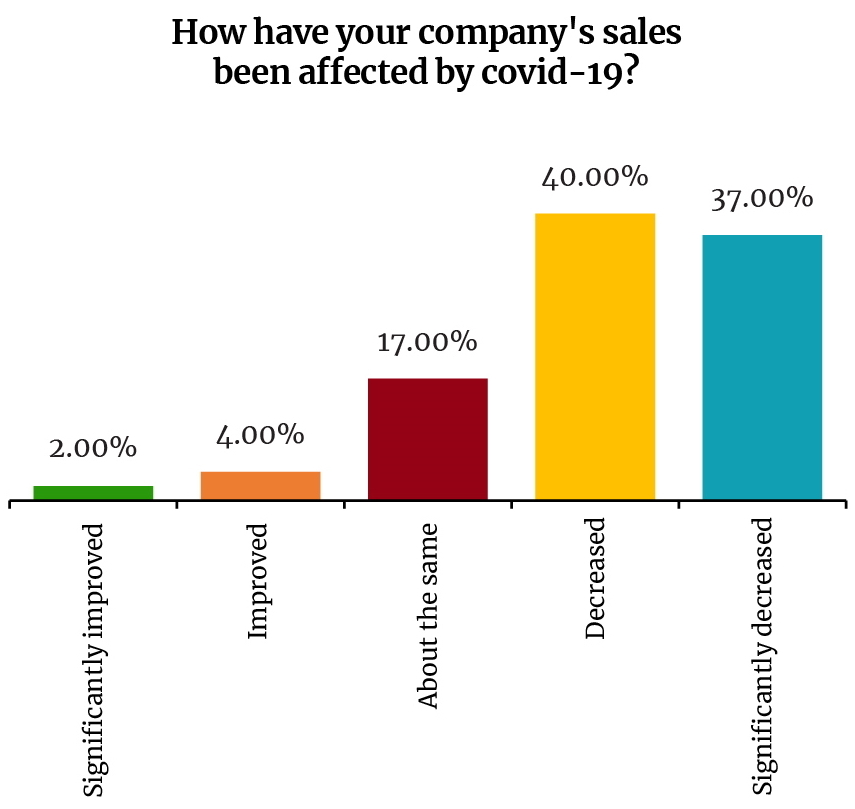 Sales have been hit hard: More than three-quarters (77%) of respondents reported a slowdown in sales as a result of the disruption, with 37% telling us that they had significantly decreased.

But critically, cashflows are still strong, with 70% saying that they have been able to keep up payments to vendors. 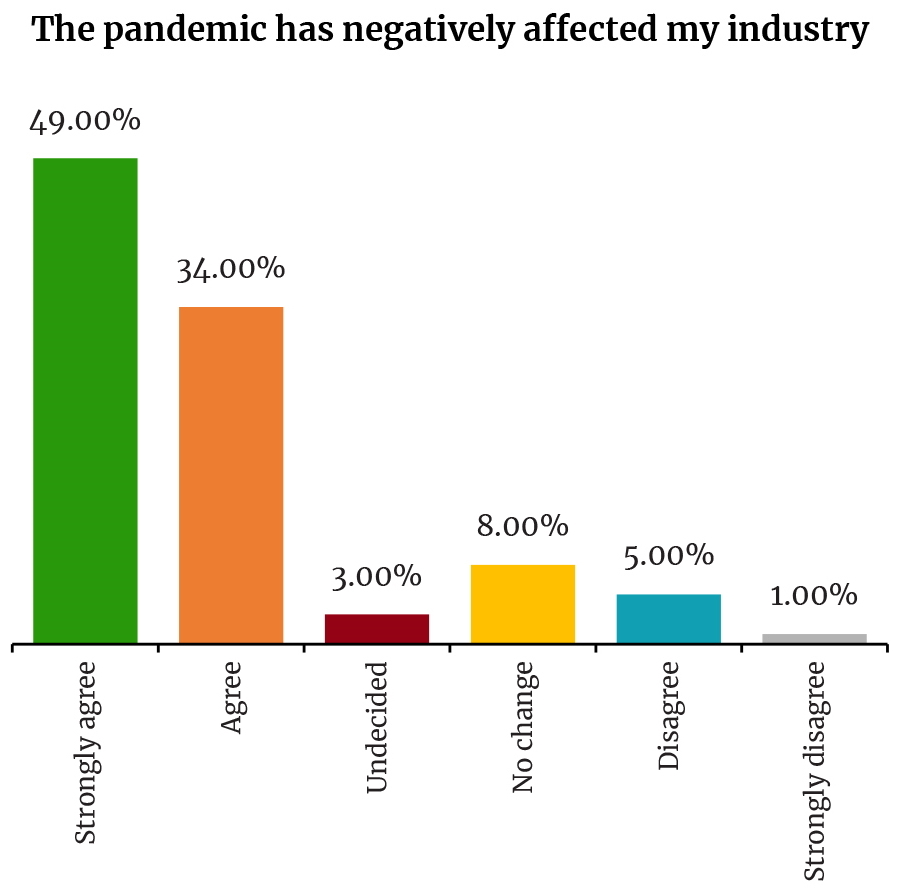 The vast majority of businesses are feeling the pain of the measures imposed to prevent the spread of covid-19. 83% of you told us that your industry had been negatively affected by the pandemic, with almost half of all respondents (49%) strongly agreeing with the statement. 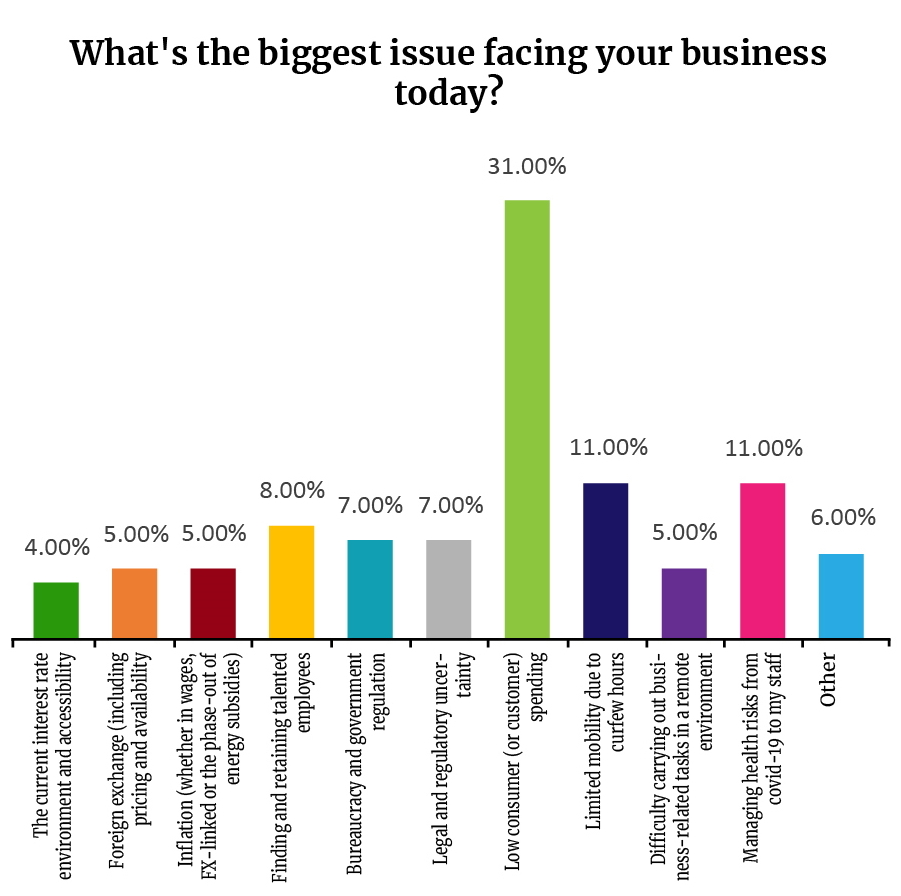 Unsurprisingly, the main issues faced by businesses have radically changed over the past three months: Almost a third of respondents (31%) said that low consumer demand is now the key challenge facing their businesses, while 11% cited protecting staff health and safety and difficulties associated with the curfew as the biggest issues. Only 7% cited bureaucracy (23% in our January poll) and finding talent (26% last time around).

HOW HAVE BUSINESSES RESPONDED? 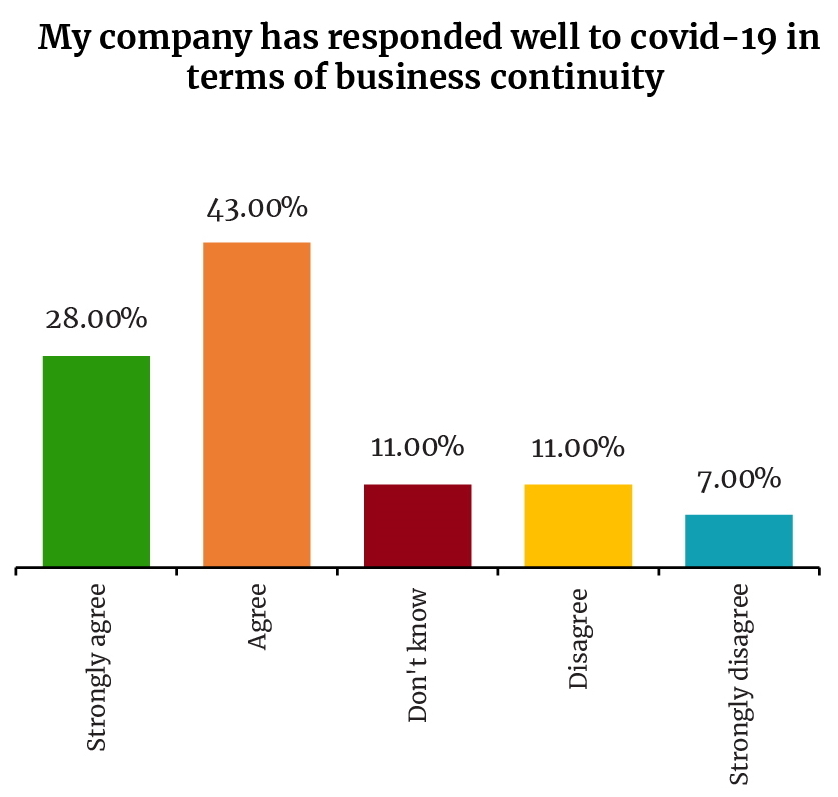 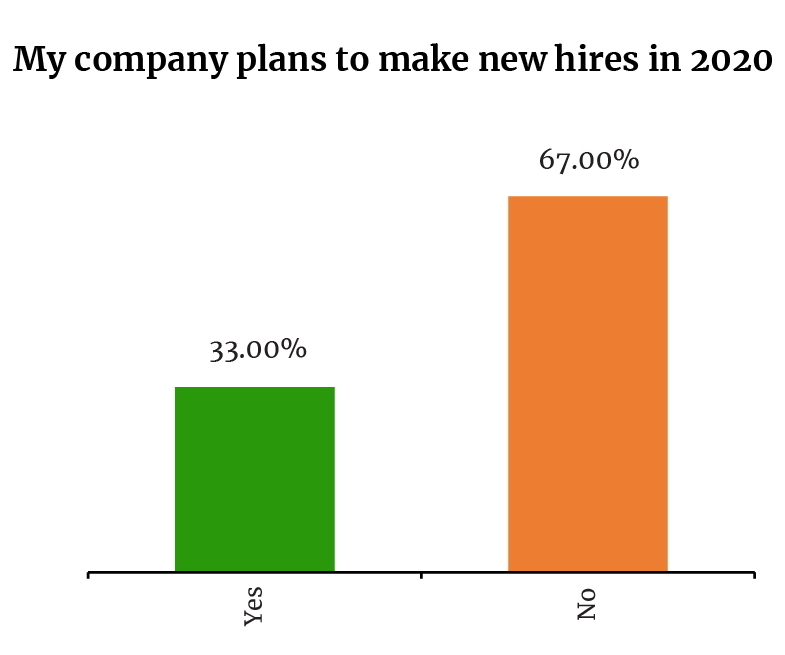 Only a third of businesses are still planning to hire new staff this year — down from 66% in our previous survey. A small majority (58%) have put in place a hiring freeze. 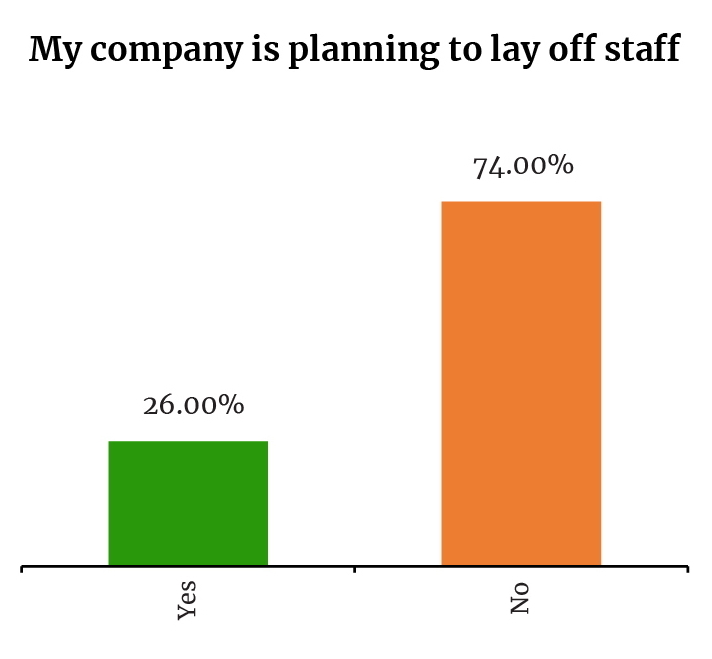 Less than a fifth (19%) of respondents have laid-off staff in response to the crisis, and 74% have no plans to do so in the future. Of the businesses that have cut back on staff, the majority (67%) have cut 1-10% of their workforce and 14% have cut 11-20%. A small minority have resorted to large-scale layoffs, with 5% shrinking their workforce by 50% or more. 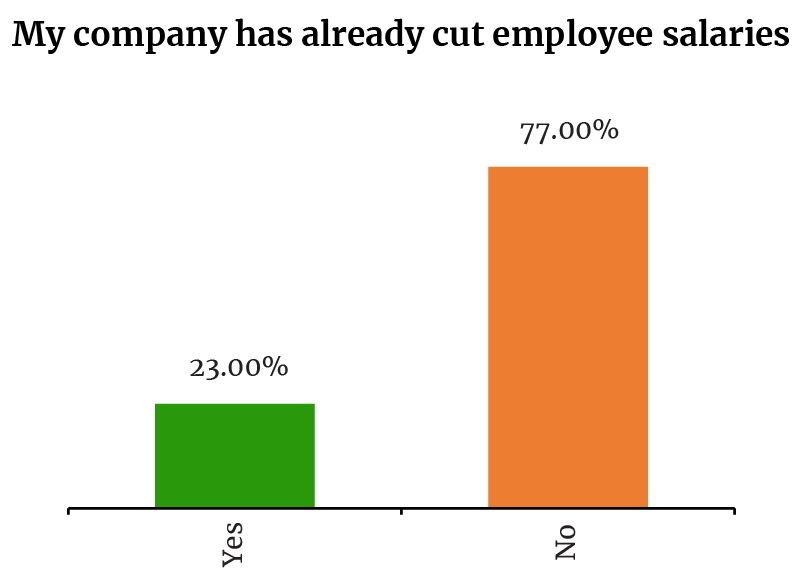 …as have salary cuts: Only 23% of you have made cuts to staff salaries and 67% have no plans to do so in the future. 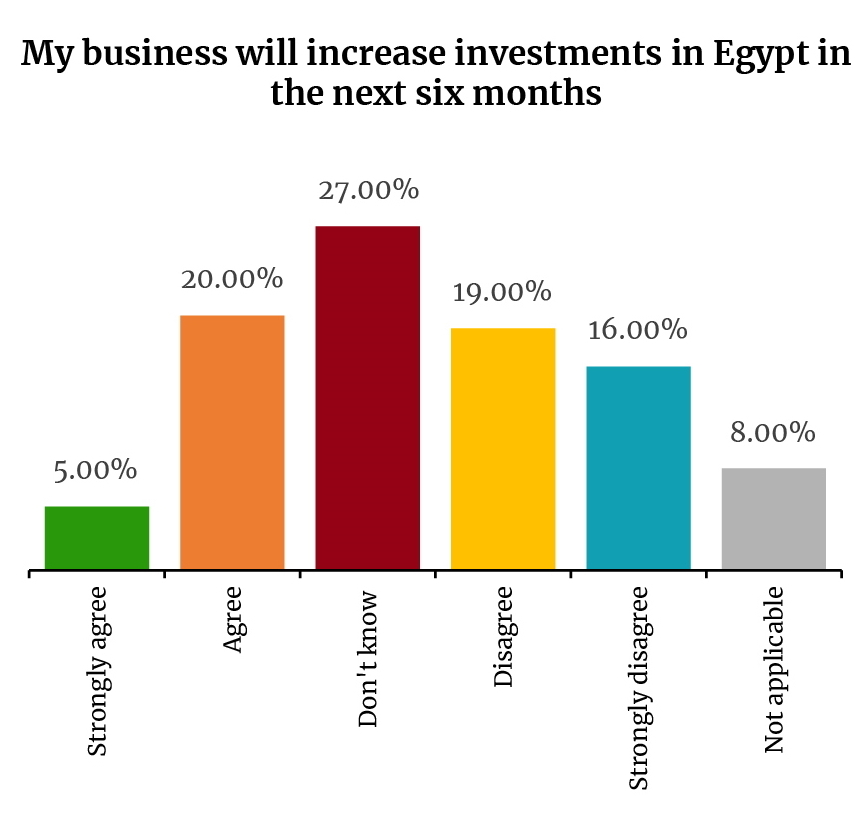 The pandemic has dealt a blow to investment plans: Only a quarter of respondents plan to ramp up investment in the coming six months, down significantly from 58% from our last survey earlier this year. A bit more than one-third (35%) told us that they won’t be making new investments this year while a quarter remain undecided about their investment plans.

Most of you have rethought your budgets in response to the crisis with 56% of respondents saying they’ve had to re-calibrate revenue expectations and spending priorities. 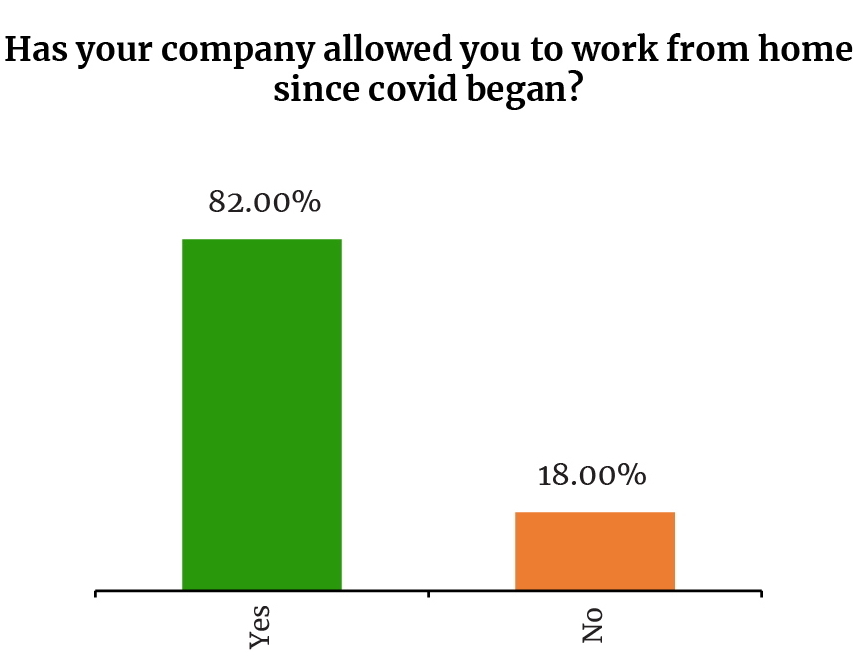 Egypt has become a work-from-home nation: 82% of respondents have had to become accustomed to working from home over the past three months, up from 29% who had done so regularly before the pandemic. For the most part this hasn’t had major effects on productivity: 46% reported no difference in productivity levels and the remaining 54% were evenly split on whether being stuck at home had made them more or less productive. 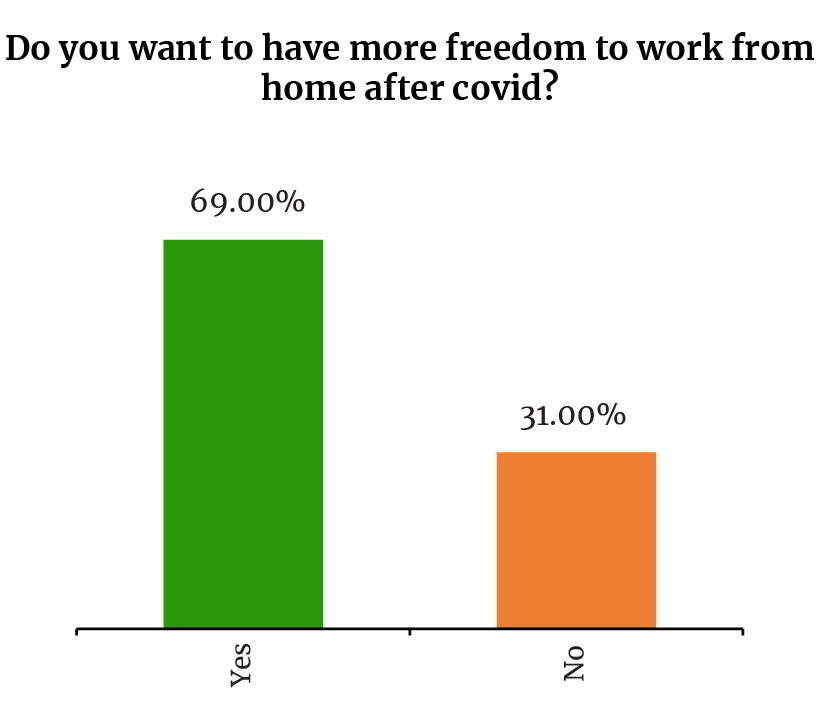 There are early signs of demand for a fundamental shift in post-pandemic work culture: 69% of people want to have more flexibility to work from home after the pandemic. 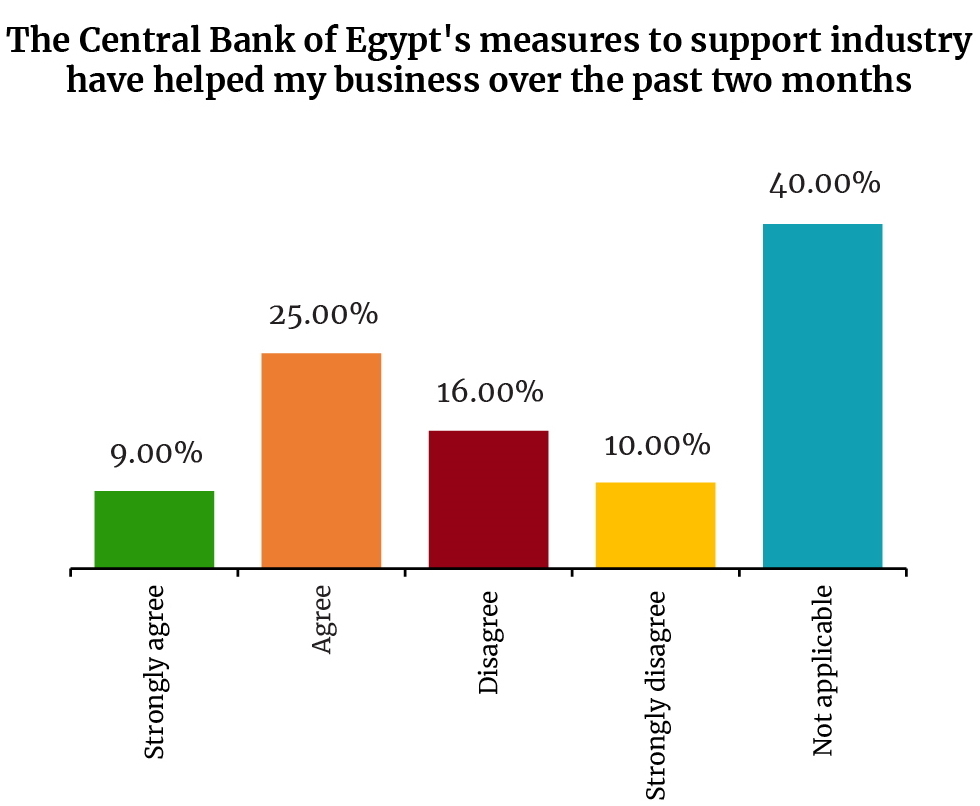 Respondents were split on the Central Bank of Egypt’s measures: A third of respondents (34%) agreed that the emergency measures rolled out by the central bank have helped their businesses over the past two months while 26% said they have seen little benefit. Of the qualifying businesses, 51% said they planned to apply to the government’s corporate income tax relief program (which allows them to pay corporate taxes in three monthly installments ending 30 June) while 49% said they’d give the taxman his due on time. 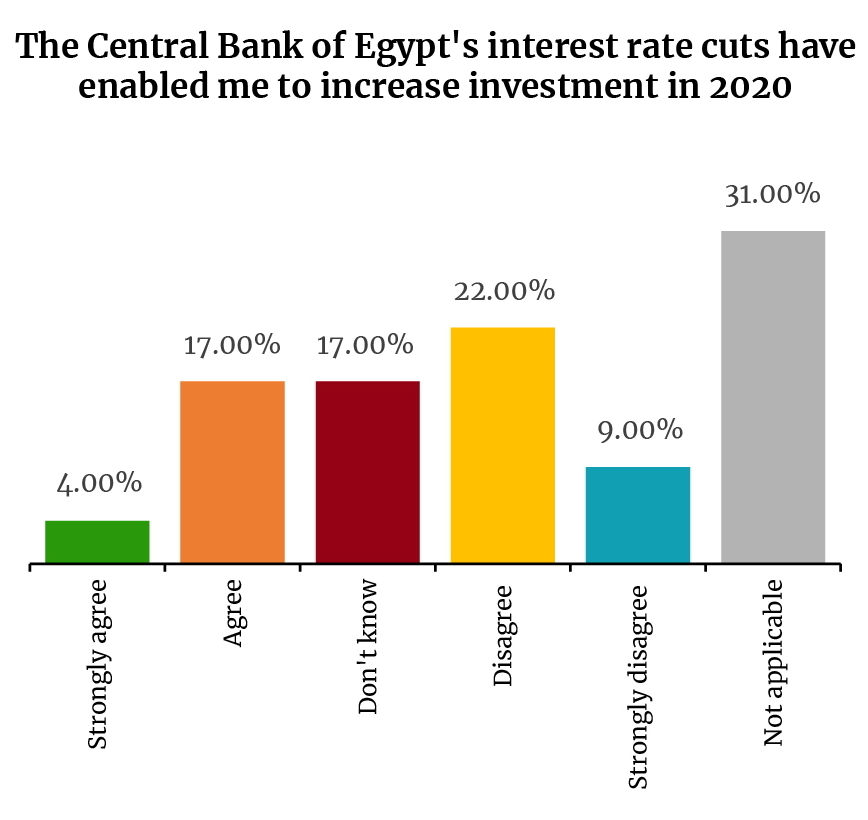 Interest rates are still too high for companies to invest: Despite a historic 300-bps rate cut in March, the majority of survey respondents told us that the CBE needs to do more to allow them to ramp up investment. Almost three-quarters (69%) of respondents said that they would need at least another 100 bps rate cut, 43% want rates to fall by at least 200 bps and 22% said they need another 300 bps cut.

HOW ARE BUSINESSES FEELING ABOUT THE FUTURE? 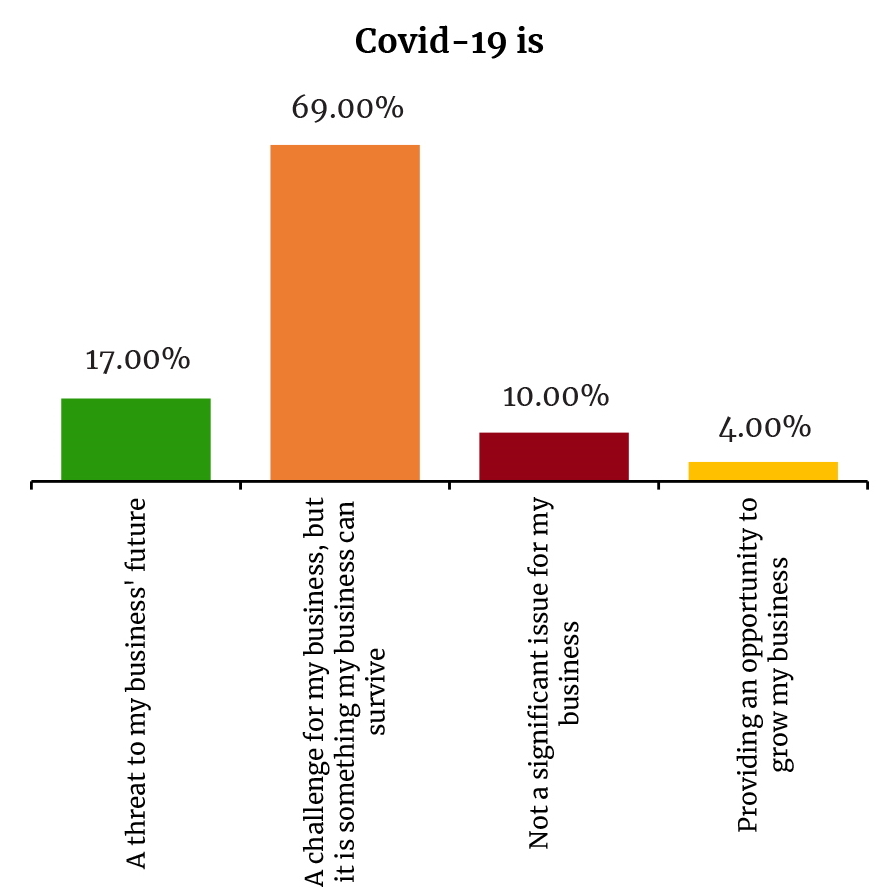 Most of you are confident that you’ll come out the other side of the crisis unscathed: A large majority (69%) of respondents told us that their business would survive the pandemic and 10% said that they haven’t felt any significant effects from the disruption.

A small minority (4%) said they have actually seen an uptick in growth as a result of the crisis.

But a sizable minority are fearing for their business’ future: Almost a fifth (17%) said that the crisis is posing a serious threat to the futures of their businesses. 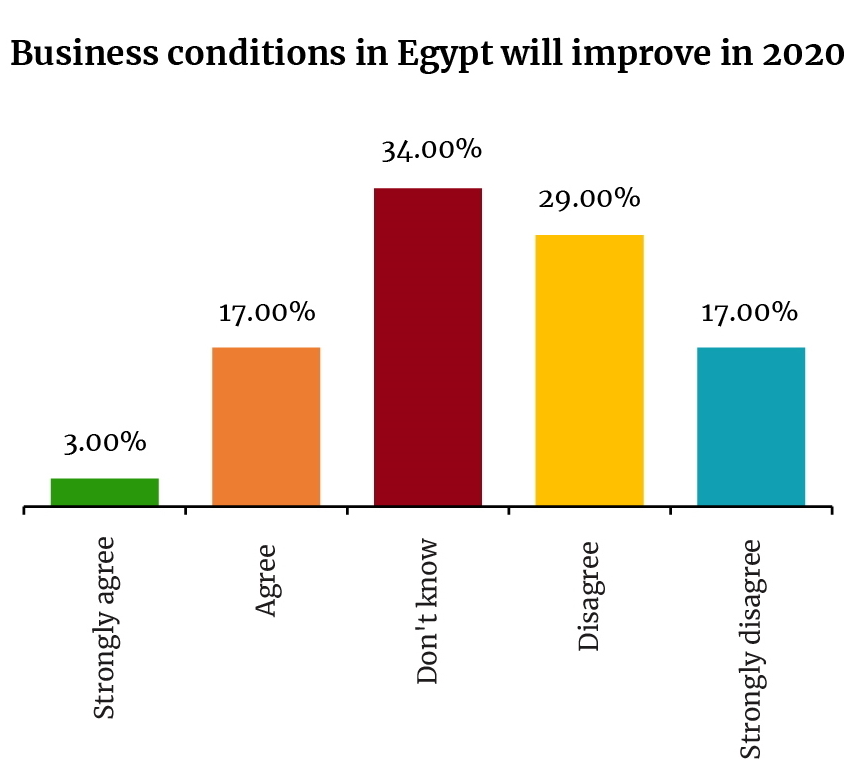 Almost half of respondents (46%) think business conditions won’t improve in the back half of the year and only 20% think things will get better. More than a third (34%) said they don’t know what direction the economy will take. 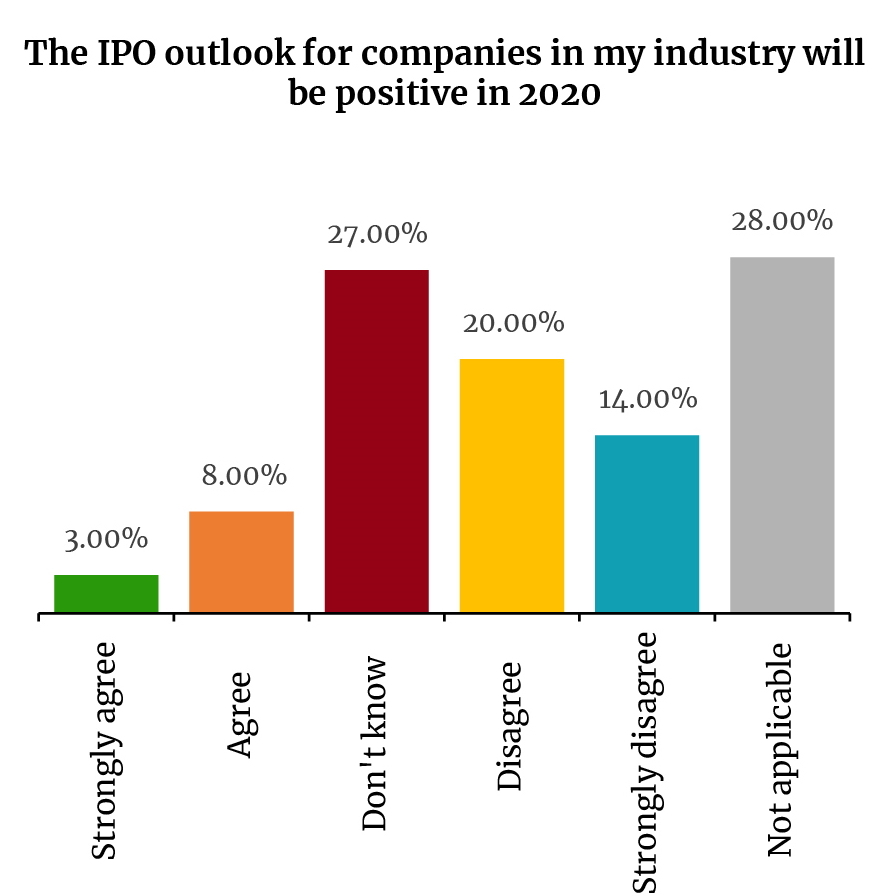 The prospect for IPOs is highly uncertain: Of the respondents that answered, 34% think that the IPO outlook for their sectors is negative for the rest of the year while just 11% are feeling positive. 37% said they don’t know about their sector’s IPO prospects. 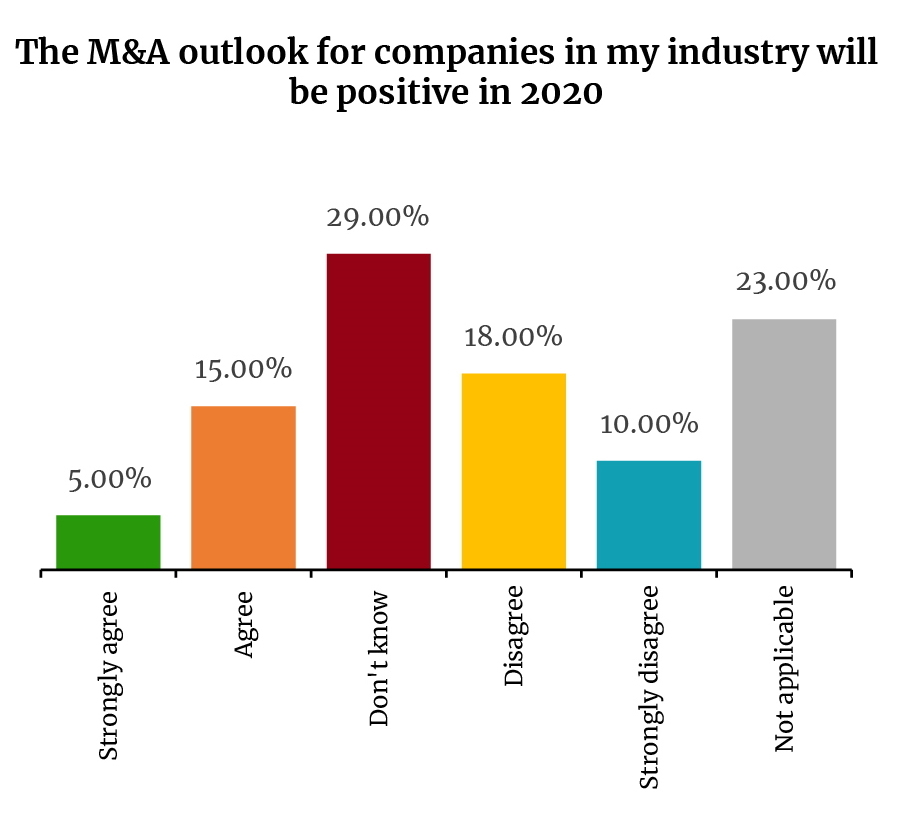 Businesses are feeling more confident about M&A activity: There was a more even split between people feeling either positive (20%) or negative (18%) about their sector’s M&A prospects for the rest of the year. Still, many are uncertain about the outlook with 29% telling us they don’t know what to expect. 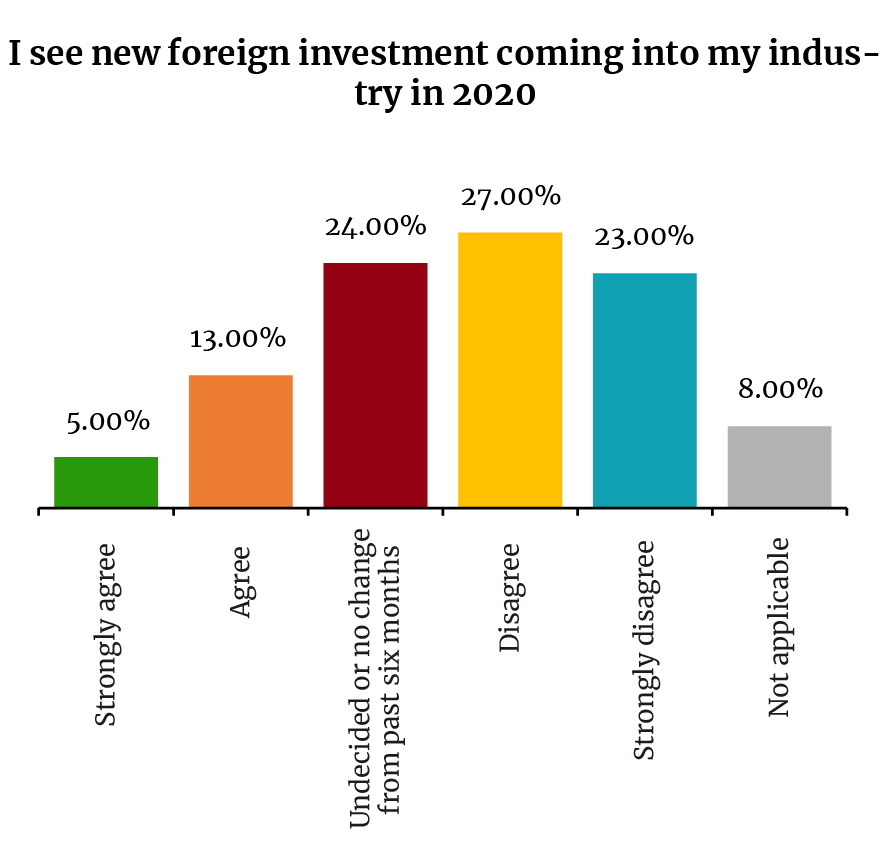 Don’t bet on new foreign investment: Half of respondents don’t think they’ll see any new investment coming into their sector this year —that’s a 180 degree shift from our last poll, when 60% of you expected more FDI this year.. 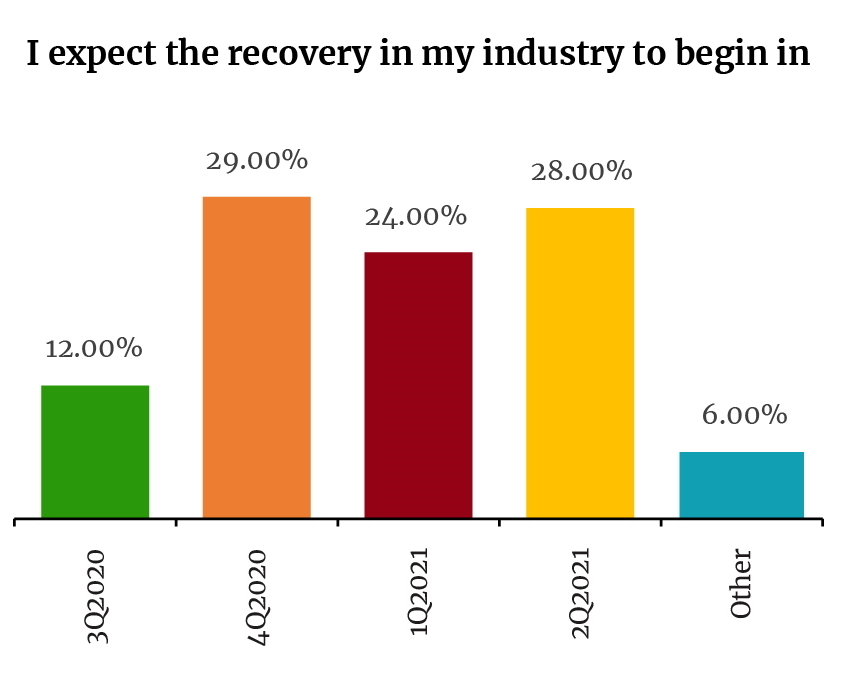 The economic recovery: The majority think that we’ll need to wait until next year for the economy to recover, with 24% of people predicting green shoots in 1Q2021 and 28% saying 2Q2021. 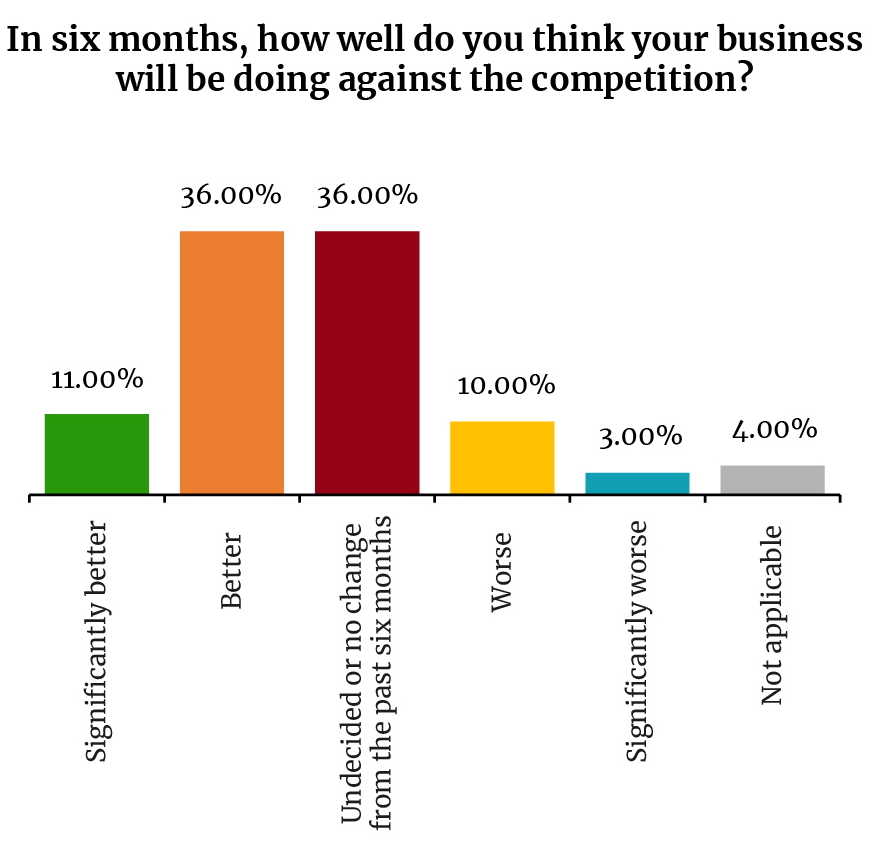 But this doesn’t seem to be weighing on performance outlooks: Almost half (47%) expect to perform better against the competition within six months while just 7% think they’ll be doing worse. 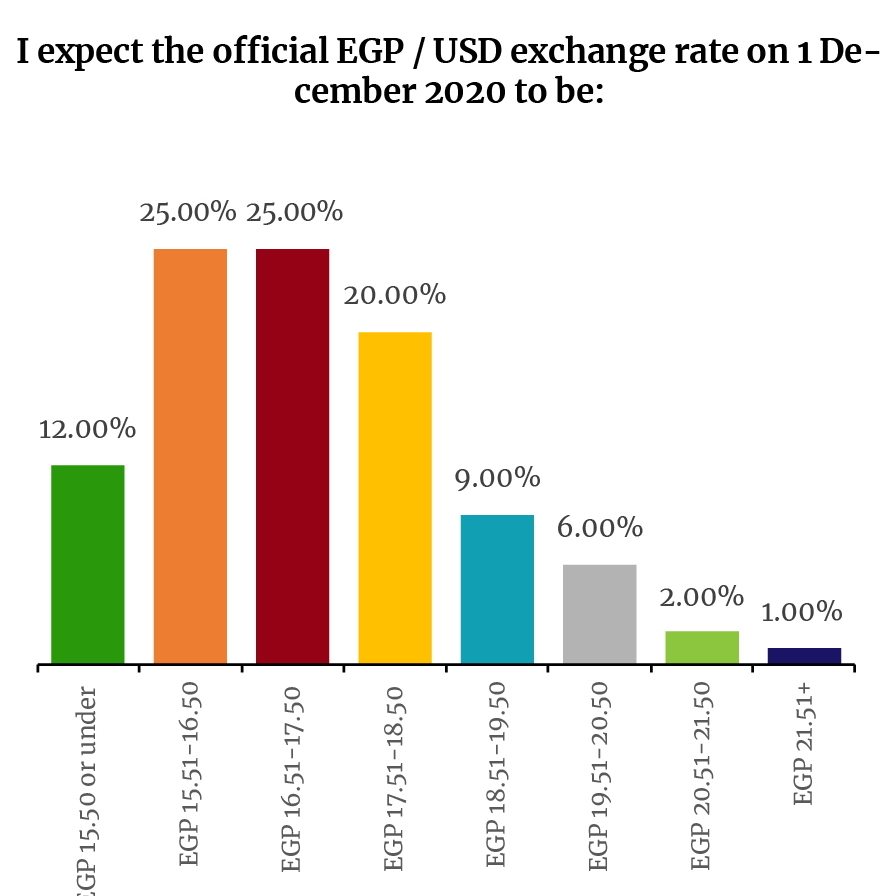