THIS MORNING: We could see some final contracts being signed for green hydrogen projects by 2Q 2023, says El Said

Good morning, friends, and happy End of COP27. We have a roundup this morning in the news well, below, along with the final bits of news out yesterday. Enterprise Climate has deeper dives for those of you who need to get into the details.

Speaking of COP, before we get underway with the rest of the news:

The Unsung Hero of COP27 Award goes to Amb. Mohamed Nasr, our lead climate negotiator, whose smart, persistent work paid off as he and his team delivered a loss and damage fund for vulnerable emerging markets even after rich nations publicly declared there was no way it was going to happen.

The Overlooked News of COP Award goes to the Global Renewable Hydrogen Forum, which President Abdel Fattah El Sisi and Belgian PM Alexander De Croo launched early in the summit. The body aims to become the hydrogen industry’s equivalent of the East Mediterranean Gas Forum. The forum could ultimately serve as a venue for Egypt and other emerging players to argue for wealthy countries to provide subsidies for our green hydrogen industries. That would go a long way toward evening-out the distorting effects of the subsidies now promised to US producers under the Biden administration’s Inflation Reduction Act.

From the Dept. of We Can’t Get a Break: We’ve spoken with just over a dozen senior Egyptian execs about the organization at COP27 and … it seems it was not even a quarter of the [redacted] show portrayed on social media and in some Western media outlets. Broken sewage pipe? Fixed on day one. Expensive water and food? “Unlike Glasgow, at least there was food.” Long wait for transport? “I would wait an hour, hour and a half at COP26.” Queues to enter and exit? “Shorter and smoother than last year.”

We, as a people, love to complain about our own inability to deliver a well-organized event. If folks we consider both friends and “the usual suspects” in the complaints department think it went well … maybe that’s worth considering?

ICYMI- Did you miss any of our Climate CEO Poll interviews? Catch up here.

REMEMBER- Egypt signed framework agreements with international companies for nine green hydrogen and ammonia facilities on the sidelines of COP27 last week. The facilities combined would need as much as USD 83 bn in investment.

Expect most of these to be delivered: The minister said she expects most of the companies to end up signing final contracts. Final agreements would be signed after companies complete feasibility studies and reach a final investment decision. 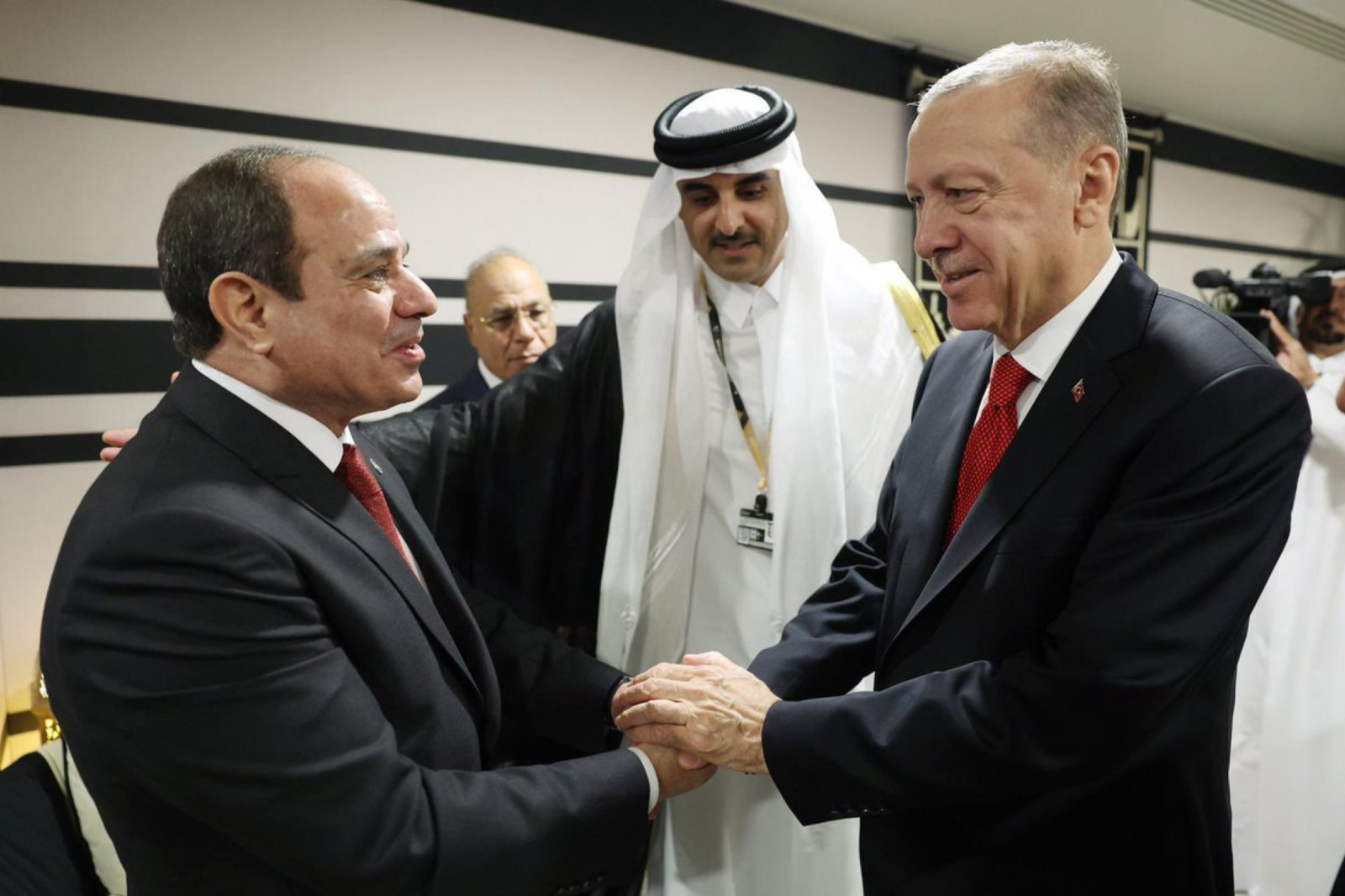 Could the handshake signal a thaw in ties between the two countries after nearly a decade of hostility? Officials from both countries began consultations last year to restore diplomatic ties, which have been severed since the Ikhwan was removed from office in 2013. Talks were suspended after only two rounds after the two sides failed to see eye to eye over Ankara’s role in Libya, Foreign Minister Sameh Shouktry told Al Arabiya in an interview last month.

It’s day two of the World Cup (all times CLT):

On the legislative agenda: MPs will discuss and vote on amendments to the Telecommunications Act, and a loan agreement between Egypt and the European Bank for Reconstruction and Development (EBRD) for the rehabilitation of Cairo Metro’s Line 2.

TREMOR WATCH– A magnitude 5.8 earthquake off the coast of Greece’s Crete in the early hours of today was felt in parts of Egypt, according to a statement by the National Research Institute of Astronomy and Geophysics. There were no reports of casualties or major damage due to the quake in Egypt, the authority said.

HAPPENING THIS WEEK– The Local Development Ministry will sign two agreements to build new recycling plants and landfill sites tomorrow, Al Borsa reported yesterday. The contracts, worth a combined EGP 4.2 bn, will see the construction of 13 facilities to recycle and process municipal waste and nine new landfill sites. The newspaper didn’t report which companies are in line for the contracts.

GOOD NEWS FOR THE EGP?

Good news for the global economy: The greenback’s relentless bull run has begun to reverse. The USD has fallen more than 4% against a basket of six currencies so far this month as positive inflation data raises expectations that the Federal Reserve will begin to scale back its interest rate hikes, according to Refinitiv data picked up by the Financial Times. Tightening financial conditions have pushed the USD to its highest level in 20 years, piling pressure on a global economy already under threat from high inflation and a wave of debt crises. But the rally has lost steam this month on signs that US inflation could be easing, putting the currency on course to suffer its biggest monthly drop since September 2020.

Is the greenback peaking? Some analysts feel confident enough to call the peak. “We expect the USD’s powerful climb over the past year to reverse in 2023 as the Fed’s hiking cycle comes to an end … It has peaked,” HSBC foreign exchange strategists wrote in a note.

That could be good news for the EGP, which has continued to slide steadily against the greenback. It’s down 1.2% this month against the USD and has thus fallen 24.1% against the USD since the central bank floated the currency at the end of October. The EGP was at a record low of 24.5364 yesterday. 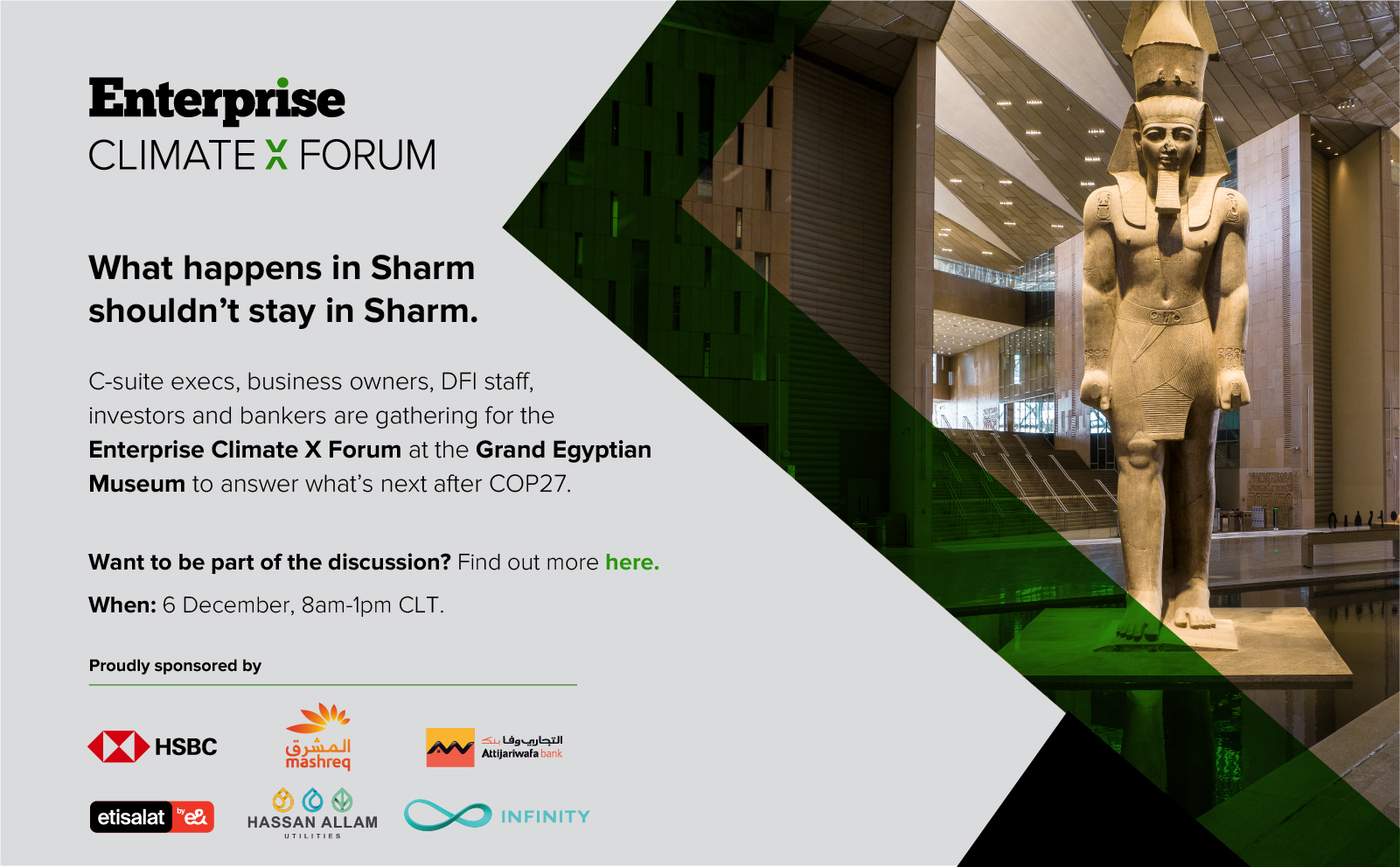 Are you a C-suite executive or investor and want to attend our Enterprise Climate X Forum? Drop us a note on climatexrsvp@enterprisemea.com to signal your interest, letting us know your name, title and where you work.

The event takes place on Tuesday, 6 December 2022 at the Grand Egyptian Museum.

PSA- The deadline to apply for the Chicago Booth Executive Program in El Gouna is Sunday, 27 December. The two-week program, which kicks off in March 2023, offers executives from Egyptian public and private sector the skills to help them “become a better leader for your organization and support Egypt’s growth in the years ahead.”

In today’s issue: Enterprise interviews Manara School Head Peter Saliba, who spoke to us about the new residential school’s plans and goals and how it plans to build its legacy in the educational sector through being a school “for the nation” by opening its doors to students regardless of their socioeconomic background.