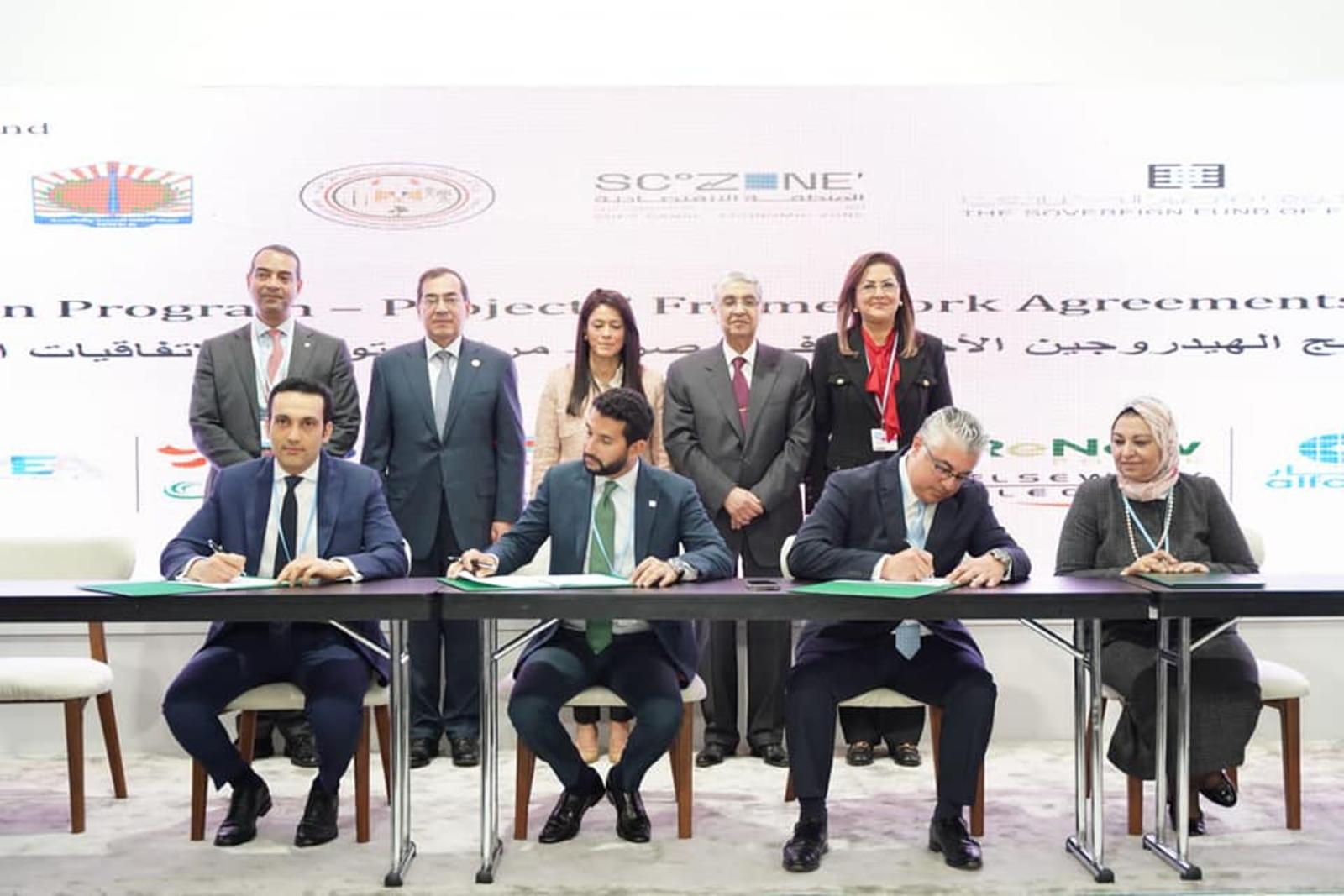 Another step forward to becoming a green energy hub: Egypt has signed framework agreements with international power companies to construct nine green hydrogen and ammonia facilities in the Suez Canal Economic Zone,  a series of government statements (here, here and here) yesterday. The facilities would collectively produce up to 7.6 mn tons of green ammonia and 2.7 mn tons of hydrogen a year when fully operational, putting Egypt on the road to becoming a regional hub for green hydrogen.

Caveat: These aren’t final agreements. The documents signed yesterday are framework agreements and are not binding commitments. The companies will continue to study the projects before coming to a final investment decision in the coming months.

If they all go ahead, a lot of money is heading our way: As much as USD 83 bn could be invested across the nine projects, cabinet said.

The players lining up to get involved in Egypt’s green hydrogen plans:

#1- ReNew Power and El Sewedy Electric signed an agreement for an USD 8 bn project that will produce 220k tons of green hydrogen and 1.1 mn tons of ammonia a year, ReNew and cabinet said. The company said it will undertake further studies and will make a final investment decision in the next 12-16 months. If it goes ahead, it expects to begin commissioning the pilot phase in 2026.

#2- UK power producer Globeleq inked an agreement to build a 2 mn-ton green hydrogen facility. The Africa-focused company had signed an early agreement in August for the plant.

#3- Saudi company Alfanar signed one for its 500k-ton green ammonia facility. Alfanar earlier this year signed a USD 3.5 bn MoU with several Egyptian organizations to build the facility that will produce ammonia from 100k tons of green hydrogen every year.

#4- Masdar, Hassan Allam, and Infinity inked an agreement to establish a facility to produce up to 480k tons of green hydrogen a year.

#5- Australian energy producer Fortescue Future Industries signed an agreement to set up a green ammonia production facility with an annual production capacity of some 2 mn tons.

#6- Norway’s Scatec, Fertiglobe, Orascom Construction, and the SFE inked an agreement for the consortium’s 100 MW green hydrogen facility in Ain Sokhna. The companies last week began commissioning of the first phase of the plant. Once fully developed, it will produce up to 15k tons of green hydrogen as feedstock for as much as 3 mn tons of ammonia per year.

#7- Al Nowais subsidiary AMEA Power’s put pen to paper for a 390k-ton per-year green ammonia plant and could be up and running by the end of 2025 at its 500 MW green hydrogen plant in Ain Sokhna.

#8- French energy producer TotalEren and SME investor Enara Capital signed an agreement for a 300k-ton green ammonia facility in Ain Sokhna. TotalEren and Enara first signed an MoU with Egypt back in May that stipulated the facility would initially produce 300k tons of ammonia each year.

#9- EDF Renewables and Egyptian firm ZeroWaste inked an agreement with the SCZone for a USD 3 bn facility that is slated to produce some 350k tons of green ammonia for ships. Construction of the plant is expected to begin in 2024, with operations slated to begin in 2026.

Becoming a green hydrogen hub doesn’t happen overnight: It’s going to take until the middle of the next decade until all these facilities are fully operational, according to Planning Minister Hala El Said (watch, runtime: 13:54).

Egypt wants to be a key player in the global hydrogen market: A host of companies have been conducting feasibility studies for green hydrogen and ammonia projects this year after signing MoUs worth bns of USD. The biggest project was an agreement with Maersk to work on a huge USD 15 bn facility capable of producing 3 mn tons of fuel a year, which the two sides are expected to finalize at COP27.

EBRD LENDS A HAND ON H2-

The European Bank for Reconstruction and Development will provide a USD 80 mn loan to the Fertiglobe-Scatec-OC-SFE ammonia plant, which will be the country’s first integrated green hydrogen plant, it said in a statement. The loan comes nearly a week after the companies began commissioning the first phase of the 100 MW green hydrogen plant.

Where the funds are going: It will be used to acquire and build a 100 MW electrolyser facility powered by renewable energy. Upon completion, the facility will deliver up to 15k tons of green hydrogen annually.