Well, friends, we made it through another week together. We have a packed issue for you this morning, including news of a IDH’s potential listing on the EGX and ongoing worries about covid-19.

Egypt’s second wave is looking more real by the day: Daily cases rose for the fourth consecutive day yesterday to 329, up from 275 the day before and the highest since 30 July. This came after Prime Minister Moustafa Madbouly warned during the weekly cabinet meeting that the wave currently gripping other countries is “more dangerous and widespread” than the first, and said that “work must be done” to ensure Egypt doesn’t fall into the same situation. He called on authorities to be more vigilant in cracking down on people caught violating anti-covid precautions and urged people to work from home wherever possible.

We’re using 20% of our available ventilators and 47% of our special care beds, Health Minister Hala Zayed said at the cabinet meeting yesterday. The minister reiterated the WHO’s warning about the long term health repercussions of covid-19, and said that those who had recovered from the virus would still be able to receive a vaccine once it becomes available since we’re not yet sure how long a person stays immune after recovering.

There is good news though: Pfizer and BioNTech’s final vaccine results showed a 95% success rate with no short-term safety concerns, paving the way for the two companies to apply for emergency approval in the US and European Union in the coming days. Trials on adults aged over 65 showed a slightly lower efficacy rate of 94%, but still above the initial 90% reported last week. The vaccine’s effectiveness is just a hair above Moderna’s preliminary 94.5% figure and Russia’s Sputnik V’s 92%. Both Moderna and Pfizer’s vaccines are likely to be approved before the end of the year. The story made it to the front pages everywhere, from Reuters and the Financial Times to CNN and the Guardian.

Chinese competitor Sinovac Biotech isn’t enjoying such great results: Its creatively-named CoronaVac vaccine showed inconclusive results in its first two phases of clinical trials, generating a lower level of antibodies than seen in people who had been diagnosed with covid-19, the Wall Street Journal reports.

But reel in the excitement, as it will still be months before a large-scale rollout can begin — and even longer for the vaccine gets to countries like Egypt. Pfizer and BioNTech’s vaccine is synthetic mRNA and needs to be stored at -70°C which is rarely available outside of (really) major hospitals in developed countries. And — as the WHO reminded us yesterday — even if a vaccine is rolled out this winter, it’s not going to save us from the current wave of infections

This comes as Africa’s covid-19 case count passes the 2 mn mark. While this represents just 4% of the cases reported globally, the figure is likely underestimating the extent of the outbreak on the continent, given the weaker testing capacity, Reuters says.

US stocks weren’t impressed with the extra percentage points, focusing more on the surging case count and the new restrictions being introduced across the country. New York City took drastic action to contain the virus yesterday, re-closing schools across the city and threatening to shutter all non-essential businesses. The Dow Jones and S&P 500 both fell 1.16% on the news, while the tech-heavy Nasdaq — so often a beneficiary of the pandemic — lost 0.8%. Bloomberg and Reuters have more.

Asian shares were marginally down at the time of dispatch this morning, while the US markets are on course to open in the red later today.

SPEAKING OF MARKETS: Emerging market stocks are going to be the equity play of 2021. Half of fund managers surveyed by the Bank of America said they would rather put their money in EM stocks than in oil or the S&P 500, the Financial Times reports. Positive vaccine test results from Pfizer and Moderna have inspired a wave of confidence that saw EM equities climb 2.3% since the announcements, according to MSCI’s emerging market index. “These results have likely removed some pessimism about the medium-term trajectory of the virus and its consequences on the global economy,” said Barclays strategist Andreas Kolbe, adding that undervalued EM currencies and assets stand to gain from lower volatility.

Are we going to see a new wave of antitrust enforcement? Trade Minister Nevine Gamea directed the Egyptian Competition Authority’s newly-appointed acting chairman, Ibrahim El Segeny, to hold periodic meetings to “swiftly” address pending cases and reports of antitrust violations, the authority recently said. The authority has already looked into cases in industries including pulp and paper, mobile phones, automotives, steel, and oil services during its first meeting last week, according to the statement, which did not specify what companies it is looking at.

Candidates standing in runoff elections have been told to shush as voters return to the polls to settle the remaining 110 seats from the first round of voting for the House of Representatives held last month in Giza and other governorates, reports Youm7. Those voting abroad can head to the polls today through Monday; voters at home can cast their ballots on Monday and Tuesday. The pro-government Mostaqbal Watan party has dominated proceedings so far, putting it on course to take legislative control of the House, in addition to the Senate.

Meanwhile, our newly-elected Senate will vote on draft legislation setting its bylaws when it reconvenes on 29 November, Al Mal reports. The 300-article bill would see the chamber vote on constitutional amendments and any bills referred to it by the House of Representatives or the president, and ratify international treaties.

We could know more about Egypt’s commodities exchange (Egycomex) next month, when a meeting to finalize trading guidelines and eligibility rules for commodity traders on the marketplace is scheduled, exchange Chairman Ibrahim Ashmawy said, according to Al Mal. The exchange is expected to be up and running in the first half of 2021 and will launch with only wheat as a tradeable commodity.

Airlines flying to Egypt’s tourist hotspots will get a 50% discount on landing and docking fees as well as 20% off on-the-ground plane services, Civil Aviation Minister Mohamed Manar announced in the official gazette yesterday, Masrawy reports. The discounts came into effect starting November and will continue for six months until the end of April. The decision applies to airlines flying to the Red Sea, Luxor, Aswan, South Sinai and Matrouh. Egypt is trying to resuscitate a tourism sector hammered by covid-19: Monthly tourism receipts have fallen almost 90% this year. 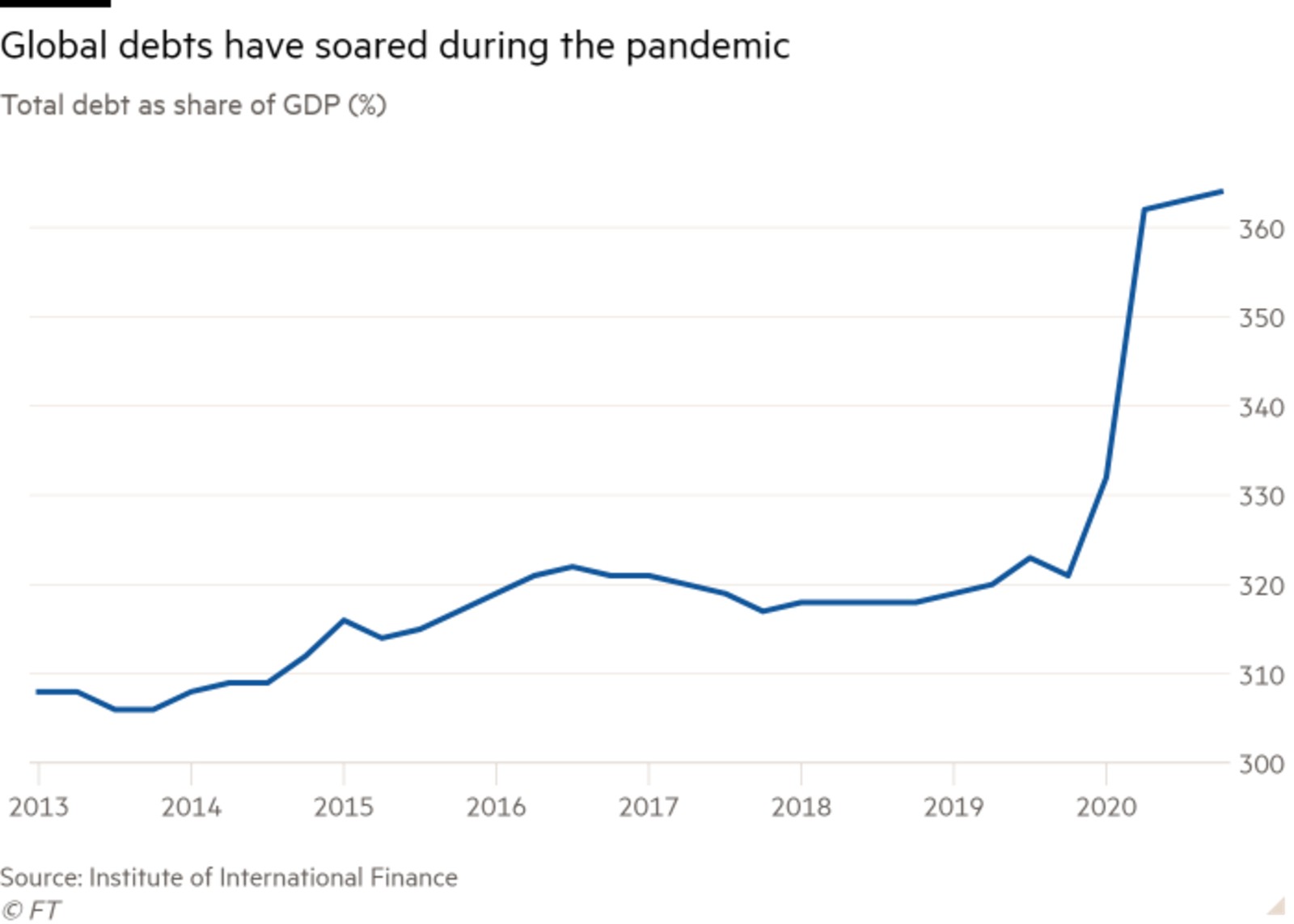 Global debt is rising at a scary pace thanks to pandemic spending, increasing by USD 15 tn in just the first nine months of this year to hit a record USD 272 tn by the end of the third quarter, the Institute of International Finance said yesterday. This “tsunami” of debt is expected to hit USD 277 tn (365% of GDP) by the end of the year, raising “significant uncertainty” about how the world will ever unwind it without causing a global economic shock, it said.

Sudanese banks are on track to reconnect with the global financial system after spending years in isolation from foreign banks while the country remained on the US’ state sponsor of terrorism list, Reuters reports. Al Baraka Bank Sudan completed the country’s first USD transaction in almost 20 years last month, Al Baraka Bank Egypt’s general manager, Elrasheed Abdel Rahman Ali, said. The US is currently in the process of expunging Sudan from the list which would allow the country to re-establish ties with foreign banks.

The Boeing 737 Max is airborne again: US regulators have cleared Boeing to use its 737 Max for passenger flights, ending a 1.5-year hiatus following two crashes that killed more than 300 people, the Wall Street Journal reports.

FOR THE iSHEEP AMONG US: Apple is slashing to 15% the commission it takes from most app developers, the company said in a statement on Wednesday. Meanwhile, reviews of M1 chips just keep rolling in. You’ll want to check out the Verge’s take on the MacBook Air and MacBook Pro, while the hardcore will find lots in Om Malik’s take (he spoke with top Apple honchos) and Mac geek John Gruber’s exhaustive look.

Football star Mohamed Salah is staying in Egypt after he again tested positive for covid-19 yesterday, according to an Egyptian Football Association statement. Salah would have been allowed to return to the UK today if the swab test had turned up negative, according to The Sun. The Liverpool midfielder was hoping to play in Sunday’s Liverpool vs Leicester match and requested he be tested earlier, an unnamed source close to Salah told Youm7. He has been isolating in Egypt since it was announced this week that he contracted the virus. Mohamed Elneny has also tested positive again.

Meanwhile, Ahmed Hassan Kouka became the third player to test positive for covid-19, the Egyptian Football Association said in a statement on Wednesday.

The foreign press is all over Mohamed Salah this morning, from the Associated Press to Sky Sports, as were the talk shows (Masaa DMC’s Ramy Radwan was typical — watch, runtime: 10:25).

FROM THE DEPARTMENT OF KUDOS-

Egypt placed second in the 2020 DIVE Travel Awards for the second year in the row, trailing behind Indonesia as the world’s best diving destination, according to Dive Magazine. The Red Sea’s Emperor Elite ship won first place in the best liveaboard category, while Sharm El Sheikh’s Elite Diving and Sinai’s Scuba Seekers made the world’s top 10 list of diving centers.

*** HOW HAS BLENDED LEARNING BEEN TREATING YOU SO FAR? Tell us what you think. We’ve put together a quick survey asking parents and students how things are going on the blended front. We’ll have the results in an upcoming issue of Blackboard. And as is our custom, we’ll draw the names of three respondents who will receive an Enterprise mug and a bag of our favourite coffee from our friends at 30 North.