We’re heading into a long weekend, with the Manpower Ministry declaring Sunday 6 October a vacation day for civil servants and private sector employees alike in observance of Armed Forces day. Enterprise will also be off, and we’ll be back in your inboxes at the appointed hour on Monday morning.

We’re still waiting on a decision on fuel prices for 4Q2019: A source told Masrawy yesterday that the committee in charge of setting prices under the automatic fuel pricing mechanism has recommendedthat prices remain unchanged, but we are yet to hear anything official. The committee will now send its report to the Prime Minister to announce the decision, which should come into effect one day later. The committee will next convene at the end of the fourth quarter to decide on the 1Q2020 rates. The mechanism, the implementation of which was attached to the IMF loan, allows the government to base fuel prices on global oil prices and the USD exchange rate.

Indicators we’re keeping our eye on as we step into October:

On being in the delightful position to congratulate friends: Our friends at CIB and EK Holding came home with hardware from the 2019 Middle East Investor Relations Association’s annual gathering in Dubai. CIB once again brought home two Egypt awards and one Middle East award, while EK Holding’s Haitham Abdel Moneim and his team were named Most improved IR team (large cap). Congratulations from all of us and from the folks at Inktank. You can check out the details here.

If you’re in Zamalek today, go stop by our friends at 30 North Coffee, who are opening their second outlet at Iconia Zamalek (16 Mohamed Thakeb St., in front of Maraashli Church). Not sure what to order? We’re partial to their Tanzanian single origin — taken as a double shot of espresso. We wish the team all the best as they expand out of their base in Sheikh Zayed — and promise to try to forgive them for not having opened yet in the People’s Democratic Republic of Maadi. 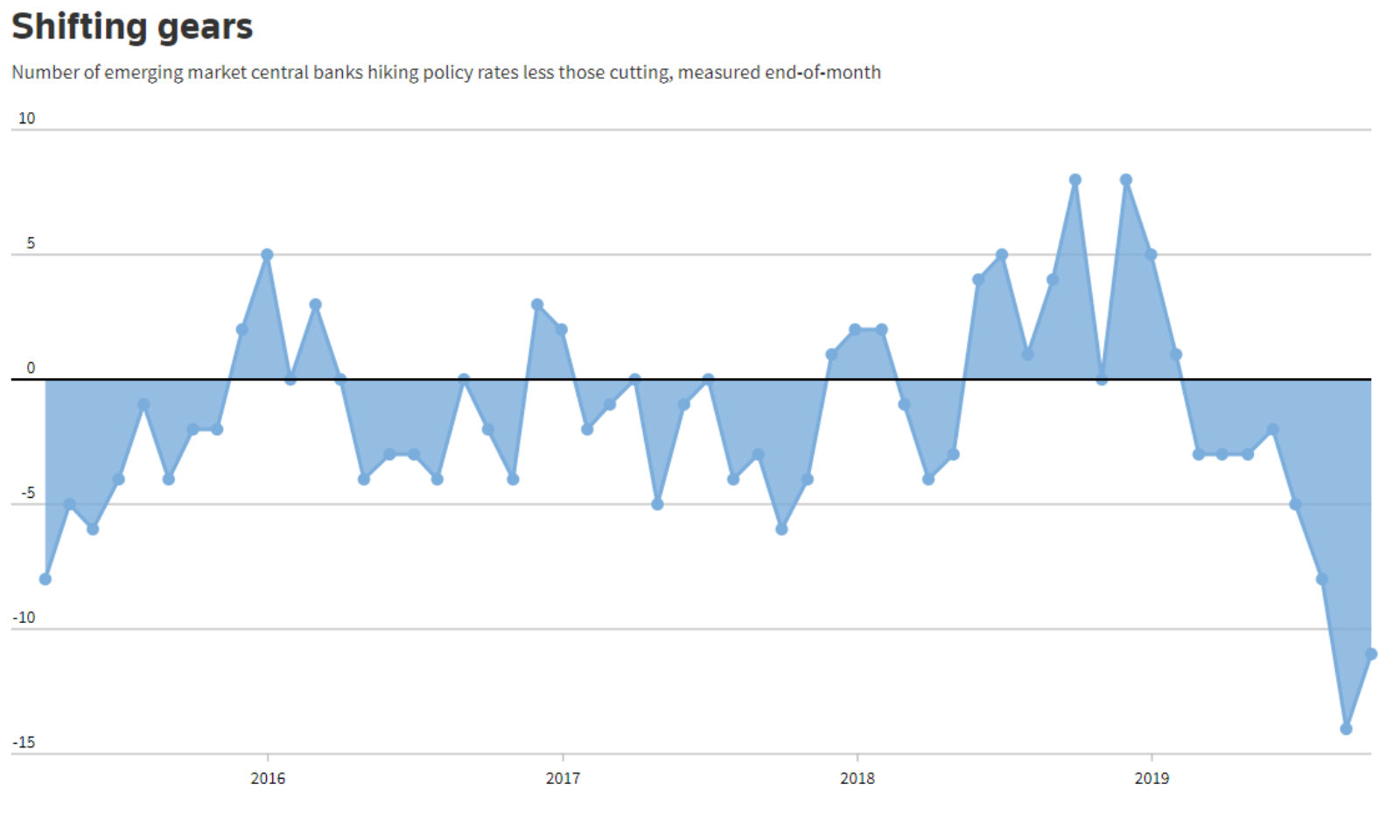 Monetary easing cycle continues across EMs: September marked the eighth consecutive month of interest rate cuts in emerging markets, with policymakers across 37 EMs delivering 11 net rate cuts, reports Reuters. Last month, however, saw fewer rate cuts than August, which saw the largest number of coordinated cuts in a decade. Egypt’s 100 bps cut last week was among the steepest, with the majority of EM central banks trimming rates by 25-50 bps. Recession-hit Turkey stood out as a startling exception with a 325 bps cut on 12 September. The sustained monetary easing cycle is following the US Fed’s lead, which cut its benchmark rate for the second time in a row last month.

Which EM currencies would get a lifeline from a trade war detente? The Brazilian real, Chilean peso and Russian ruble could top the list of strong emerging market currencies if the latest round of US-China trade talks go well, with the Thai baht and Israeli shekel coming in at the bottom, according to a recent Bloomberg analysis. The study looks at 19 EM currencies — not including the EGP — assessing their responsiveness to the yuan from mid-2017 onwards.

Global trade is set to grow at its weakest pace since the 2008 financial crisis. Global trade will expand just 1.2% this year, down from 3% in 2018, according to data from the World Trade Organization cited by the Wall Street Journal. Trade growth is expected to rebound to 2.7% in 2020, but this is contingent on the dissipation of US-China trade tensions.

Aramco is pulling out all the stops to get its target valuation. The Saudi government announced yesterday that Saudi Aramco will pay investors an annual dividend of USD 75 bn, in a bid to achieve its USD 2 tn target valuation, says the Financial Times (paywall). Authorities are also revising state royalty payments and taxes as Aramco gears up for its IPO. “The government is doing everything it can possibly do” to reach its target, a person familiar with the process said. The government has reportedly also been pressuring wealthy Saudis to take anchor positions.

Gulf states must turn on the money taps for SMEs if they are going to diversify their economies. Providing more liquidity to Gulf SMEs will be crucial if the region is going to create the mns of non-oil jobs that will be demanded by a growing workforce, Simone Tagliapietra writes in the Financial Times. She suggests that Gulf states can follow two approaches: building up the capitalization of their banking sectors and creating a well-regulated sector that incentivizes SME financing; and/or developing other sources of finance such as the capital markets instruments and fintech-based finance. 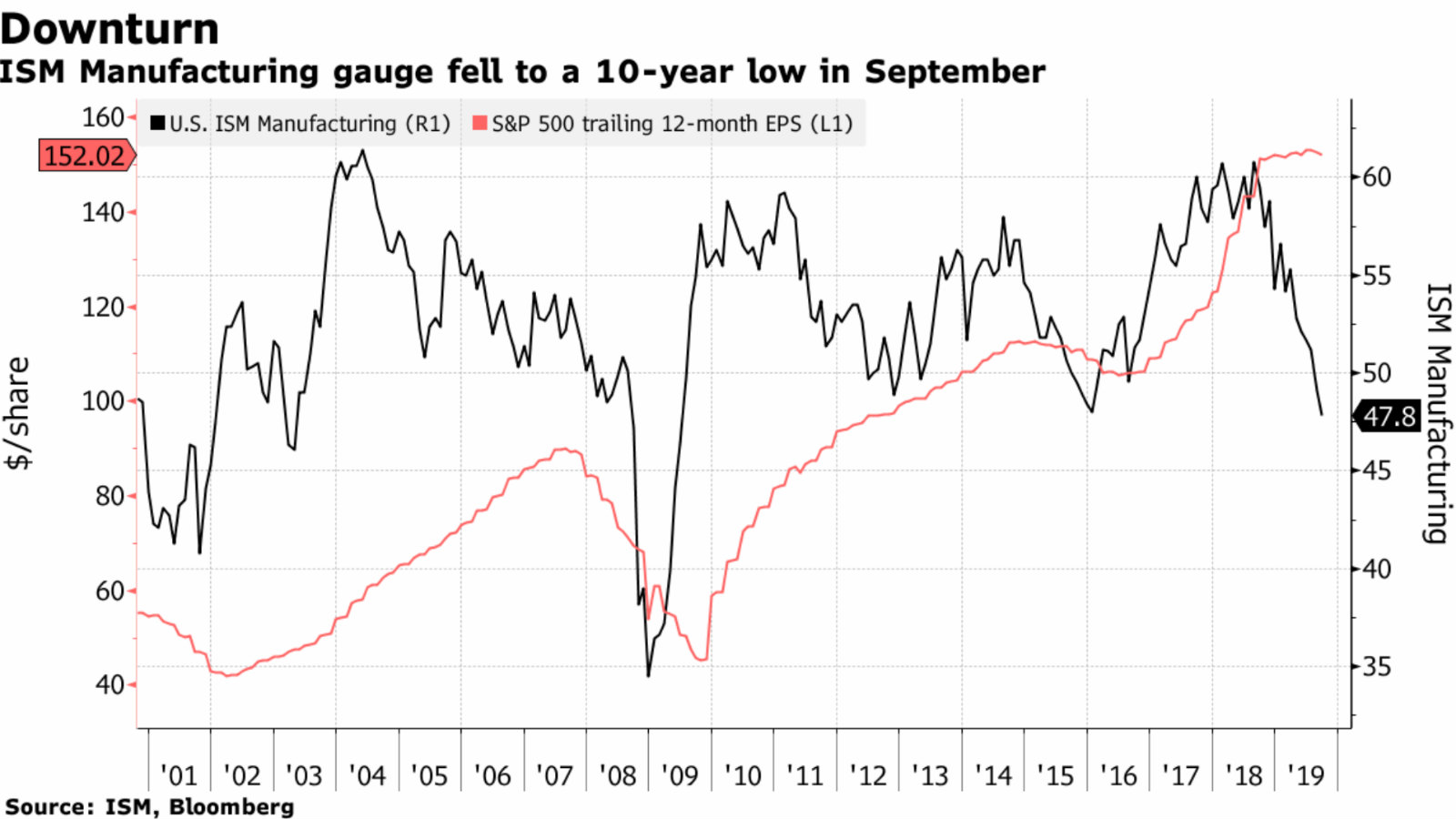 US manufacturing PMI gives worst reading in a decade: The US manufacturing purchasing managers index (PMI) slipped to 47.8% in September, indicating a contraction in the sector, according to data from the Institute for Supply Management. This is the lowest level since June 2009, according to CNBC. The new export orders index came in at only 41%, the lowest reading since March 2009. The S&P 500 dropped the most in five weeks on the news, which also sent yield on 10-year treasury bonds down. “We are clearly seeing a very weak backdrop for manufacturing. The concern is the contagion effect into the services economy, which is the driving force of the U.S. economy,” Katie Nixon, CIO at Northern Trust Wealth Management, told Bloomberg. “We cannot take this lightly and we think the Fed shouldn’t take it lightly either.”

Speaking of the Fed: The chances of a rate cut just went up a notch. Fed fund futures — a barometer for how traders see the direction of travel for Fed monetary policy — are now showing a 64.7% chance of a 25 bps cut when the central bank next meets on 29-30 October, CNBC reports, citing the CME FedWatch tool. The market gave a 40% chance of a cut prior to the release of the PMI data.

US Democrats have subpoenaed President Donald Trump’s personal lawyer, Rudy Giuliani, who was “at the heart” of Trump’s now-infamous call with Ukraine’s president, in which he tried to get the dirt on political rival Joe Biden. (Associated Press)