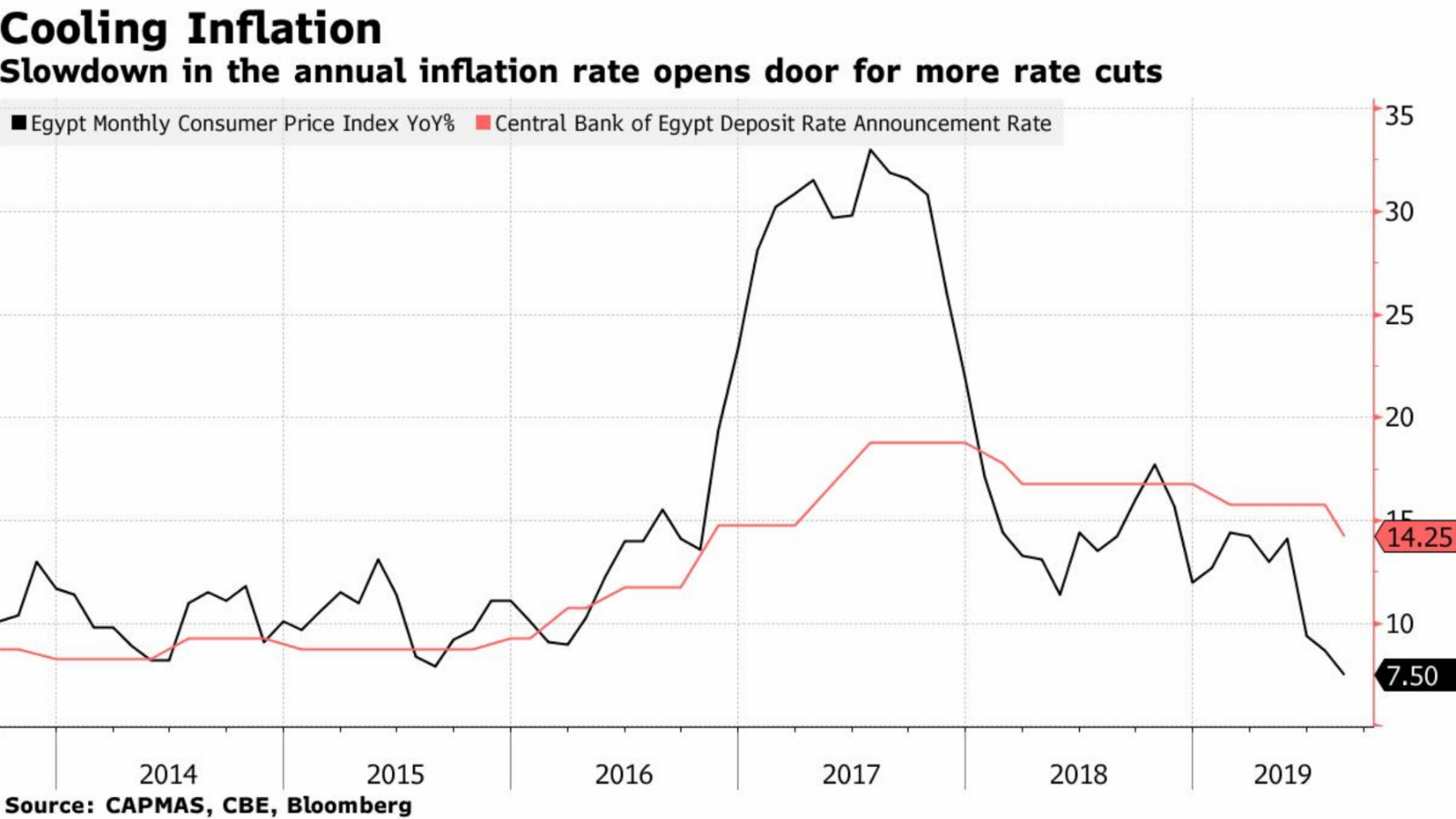 Headline inflation falls to six-and-a-half year low in August, confounding expectations: Egypt’s annual headline inflation rate fell to 7.5% in August from 8.7% in July, a low not seen January 2013, official data showed yesterday. Figures released by Capmas showed that monthly inflation slowed to 0.7% last month from 1.8% in July, driven in part by a slowdown in fruit and vegetable prices. Central bank data, meanwhile, showed that annual core inflation fell to 4.9% in August from 5.9% in July. On a monthly basis, core prices saw mild deflation, falling to -0.4% compared to 0.1% growth in July. Inflation was widely expected to rise in the summer months after the government raised fuel prices by between 16-30% in July. Bloomberg and Reuters also have the story.

Headline vs. core: Headline inflation accounts for a basket of goods and services in an economy while core inflation removes volatile products such as food and fuel.

A favorable base effect is being touted by analysts to explain the surprising figures: Esraa Ahmed, senior economist at Shuaa Securities, wrote in a note that the drop is “highly attributed” to the favorable base effect, as well as slowing fruit and vegetable price inflation. Jean-Michel Saliba, economist at Bank of America Merrill Lynch, also said the positive figures were due to the base effect. Inflation in August 2018 came in at 14.2%.

Analysts across the board had predicted a rise in inflation following fuel subsidy cuts: Inflation over the past two months has defied analyst expectations, who predicted that the effects of lifting fuel and electricity subsidies would push figures higher into double digits. Beltone’s Alia Mamdouh predicted in July an average inflation rate of 13.8% in the months following the subsidy cuts, while Pharos forecast in May 14% inflation through the summer months.

All of this puts us odds-on for a rate cut this month: Capital Economics is forecasting the central bank to cut rates for the second consecutive month, suggesting in a note yesterday that the Monetary Policy Committee would cut the overnight deposit rate by 50 bps to 13.75% when it meets on 26 September. “August’s inflation, coupled with shift towards looser monetary policy elsewhere, means that the MPC won’t hesitate in lowering interest rates again at this month’s meeting,” it wrote in a note. Radwa El Swaify, head of research at Pharos Securities, told us she expects the MPC to be more aggressive. She forecasts a 100-150 bps rate cut, putting the overnight deposit rate at either 13.25% or 12.75%.

Egypt’s rate cuts in 2019 and 2020 could be the second-deepest in emerging markets after Turkey, Bloomberg also cited BNP Paribas as saying. The CBE last month cut rates by 150 bps, bringing the overnight deposit and lending rates to 14.25% and 15.25% respectively. The main operation and deposit rates were both cut to 14.75%.

Thinking long-term: Pharos sees little chance of inflation rising back into double digits this year, and predicts an average inflation rate of 9.1% for the rest of 2019 and 9.2% for the remainder of the current fiscal year. Capital Economics sees the central bank pushing ahead with an extended easing cycle, bringing interest rates down to 9.75% by the end of 2021.