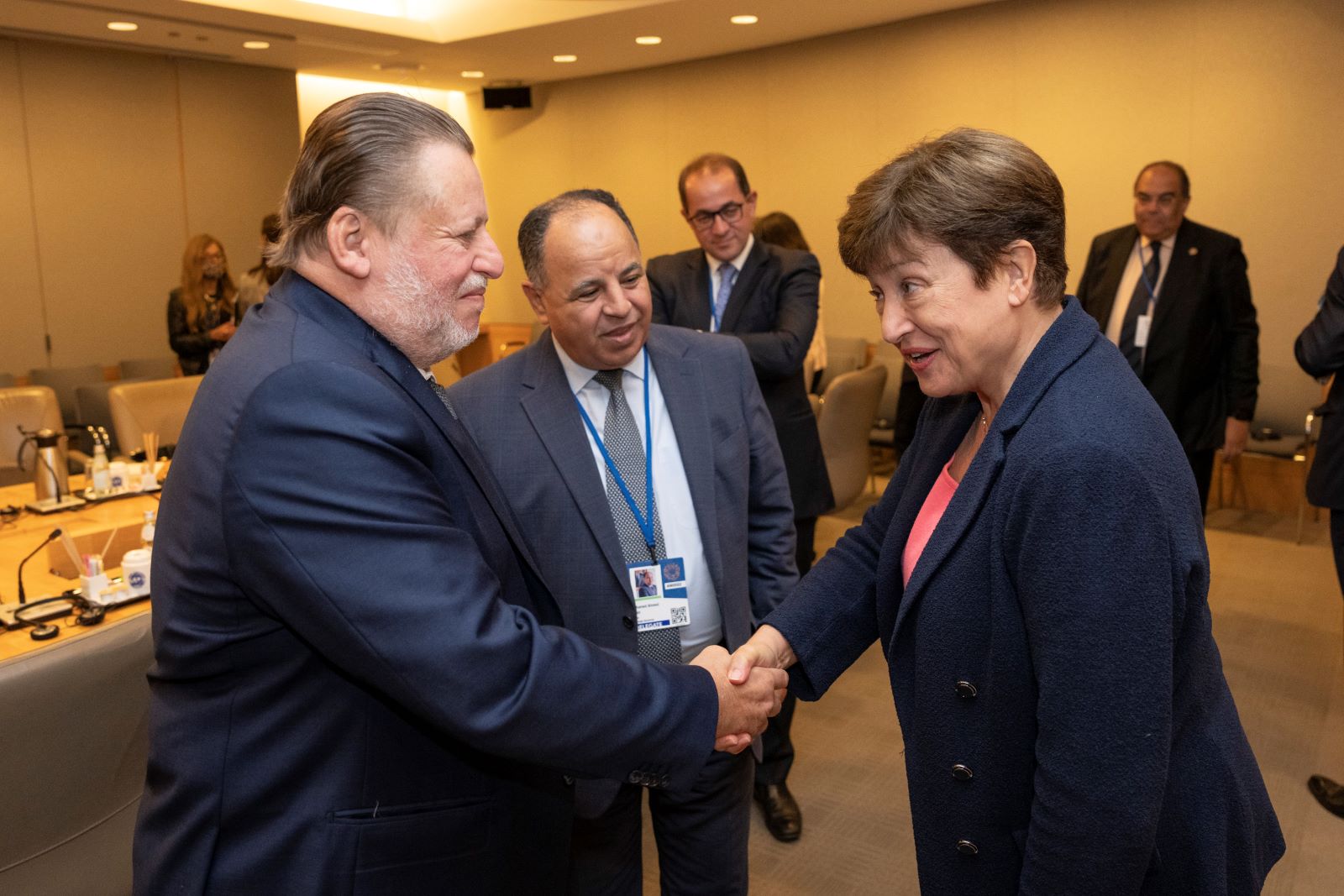 Close, but no cigar: A meeting between Egyptian officials and the IMF yesterday ended with the two sides not yet able to announce an agreement on a long-awaited emergency loan package to the country. IMF staff and top Egyptian officials “agreed to finalize their work to reach a staff-level agreement very soon,” Fund Communications Director Gerry Rice said in a statement following the meeting.

We’ve been on the edge of our seats for a week now: Egyptian officials including members of Cabinet and Central Bank Governor Hassan Abdalla were in Washington, DC, last week attending the IMF / World Bank annual meetings. They had hinted that the loan package could be announced any minute. Ahead of yesterday’s meeting, IMF chief Kristalina Georgieva said at a presser on Friday that the assistance package could be finalized “within days,” adding that all “big policy issues” had been resolved, with only a few “smaller, technical details” yet to be ironed out.

Tunisia got its loan yesterday: The IMF and Tunisian authorities reached an agreement yesterday to extend a USD 1.9 bn loan to the country, according to a statement. Georgieva said that the Fund would be holding separate meetings with Egypt and Tunisia on Saturday, saying she was confident that the IMF would “back up” both countries, according to Reuters.

There are more than 20 other countries waiting their turn: Some 28 countries have applied for financial assistance including Egypt and Tunisia, Georgieva said, adding that the IMF still has some USD 700 bn in firepower at the ready to help struggling economies.

SO WHAT WENT DOWN YESTERDAY?

The IMF says yesterday’s discussions revolved around FX rate flexibility as well as fiscal and structural reform: “IMF staff and the Egyptian authorities have held very productive in-person discussions on the margins of the IMF and World Bank annual meetings,” Rice’s statement reads. He said the two sides made “substantial progress” on some key points, giving us a rare insight into the content of the negotiations. The statement highlights fiscal reforms (i.e., better budget management and bringing down the national debt) and structural reforms including upping private sector participation in the economy. Crucially, it also gives some detail on the IMF’s desire that the country embrace a more flexible EGP exchange rate.

What the IMF had to say about FX rate flexibility: According to Rice, yesterday’s meeting saw discussion of “monetary and exchange rate policies that would anchor inflation expectations, improve monetary policy transmission, improve the functioning of the foreign exchange market, and bolster Egypt’s external resilience.” He says such policies would allow the country to “gradually and sustainably rebuild foreign reserves.”

Expect a “comprehensive structural reform” program to include not just upping the private sector’s role in the economy, but measures designed to enhance competitiveness and accelerate our green energy transition, the statement suggests.

IT’S ALL FX, ALL THE TIME

The Fund is holding the line on exchange rate flexibility: Currency was a key talking point for Georgieva before officials headed into yesterday’s talks. Asked why negotiations had dragged on for seven months and counting, Georgieva said “it boils down to exchange rate policy in Egypt,” saying that “it has to be thoughtfully designed.”

Georgieva also pointed to the changing of the guard at the Central Bank of Egypt (CBE) as a reason for the delay in talks, noting that the new governor needs to “feel comfortable with where we are headed with the policy.” Hassan Abdalla was appointed to head up the central bank on 18 August, after the sudden exit of Tarek Amer.

Maait signaled on the airwaves Friday night that we’ve gotten the message on FX: “The stable FX rate had negative impacts on Egypt’s reserves and the economy as a whole, especially in light of the external global economic shocks,” Finance Minister Mohamed Maait said during a phone-in with Amr Adib on El Hekaya (watch, runtime: 35:03), explaining why the lender sees a flexible exchange rate as crucial for the Egyptian economy. Maait said the lender had no demands regarding “the budget, financial policies, and the subsidy program,” and that it is only keen on exchange rate flexibility. Planning Minister Hala El Said and Maait have both suggested that the government is in favor of a flexible FX rate for the EGP “if necessary” in recent weeks.

REMEMBER- The EGP has lost a little more than a quarter of its value against the greenback this year. Pundits see the EGP settling somewhere between 22-24 to the USD — and you, dear readers, think the EGP will settle at 22.12 on average.

Both Georgieva and Maait remained tight-lipped about the size of the package, though Maait on Friday said the size would be determined in “two or three days.” Reuters quotes one source familiar with the matter as saying that the package is likely at the lower end of the USD 3-5 bn range expected by some pundits.

The World Bank will mull over granting Egypt loans “if it stays committed to the path of economic reform,” CNBC Arabia quotes World Bank chief David Malpass as saying, without disclosing details on the size or nature of the potential loans. The quote does not appear in the transcript of Malpass’ remarks.

Fiscal reforms are important protection against exogenous shocks, says Azour: “This is where the importance of adapting the monetary policy, to shield the economy from those external shocks, maintain a fiscal discipline that is very much needed, while strengthening the social protection mechanisms through the various instruments,” IMF director for the Middle East and North Africa Jihad Azour told reporters after the presser, explaining what reforms the IMF has been expecting from Egypt. Azour also noted that Egypt’s privatization program — along with other “structural reforms” — will “allow Egypt to maintain a high level of growth and address some of the issues that were brought in by the current exogenous shock and crisis.”

Fiscal support is also key for EMs to overcome rising food and energy prices, CBE governor says: Hassan Abdalla noted (pdf) the importance of the IMF and the World Bank’s role in continuing to provide financial assistance, including to “vulnerable middle-income countries,” during a speech delivered at a plenary session he chaired at the gathering.

Abdalla’s role as chair is notable and signals he is in very good standing with the IMF and World Bank. Abdalla was chairman of a plenary session on Friday that featured World Bank boss David Malpass IMF chief Kristalina Georgieva. You can catch Abdalla’s remarks here (watch, runtime: 54:15).

Abdalla noted the IMF and World Bank “have a central role to play in supporting the membership at this critical juncture,” saying they need to “guide countries’ policy responses while being mindful of social and political economy considerations.” Policymakers, he said, face a basket of challenges including “high food and energy prices and complicated tradeoffs in monetary policy.” The Bretton Woods institutions need to be “agile and generous,” he added, noting that they have while they have acted rapidly since the start of the pandemic and the crises that have followed, “they need to continue to widen they support, including to vulnerable middle income countries” such as Egypt.

BACKGROUND- Talks for an IMF package have stretched on for months: Egypt entered talks with the IMF in March as part of a bid to lock in financial support following the economic shocks caused by Russia’s war in Ukraine, rising interest rates, and the global-risk off in financial markets.