Inflation is hurting the private sector 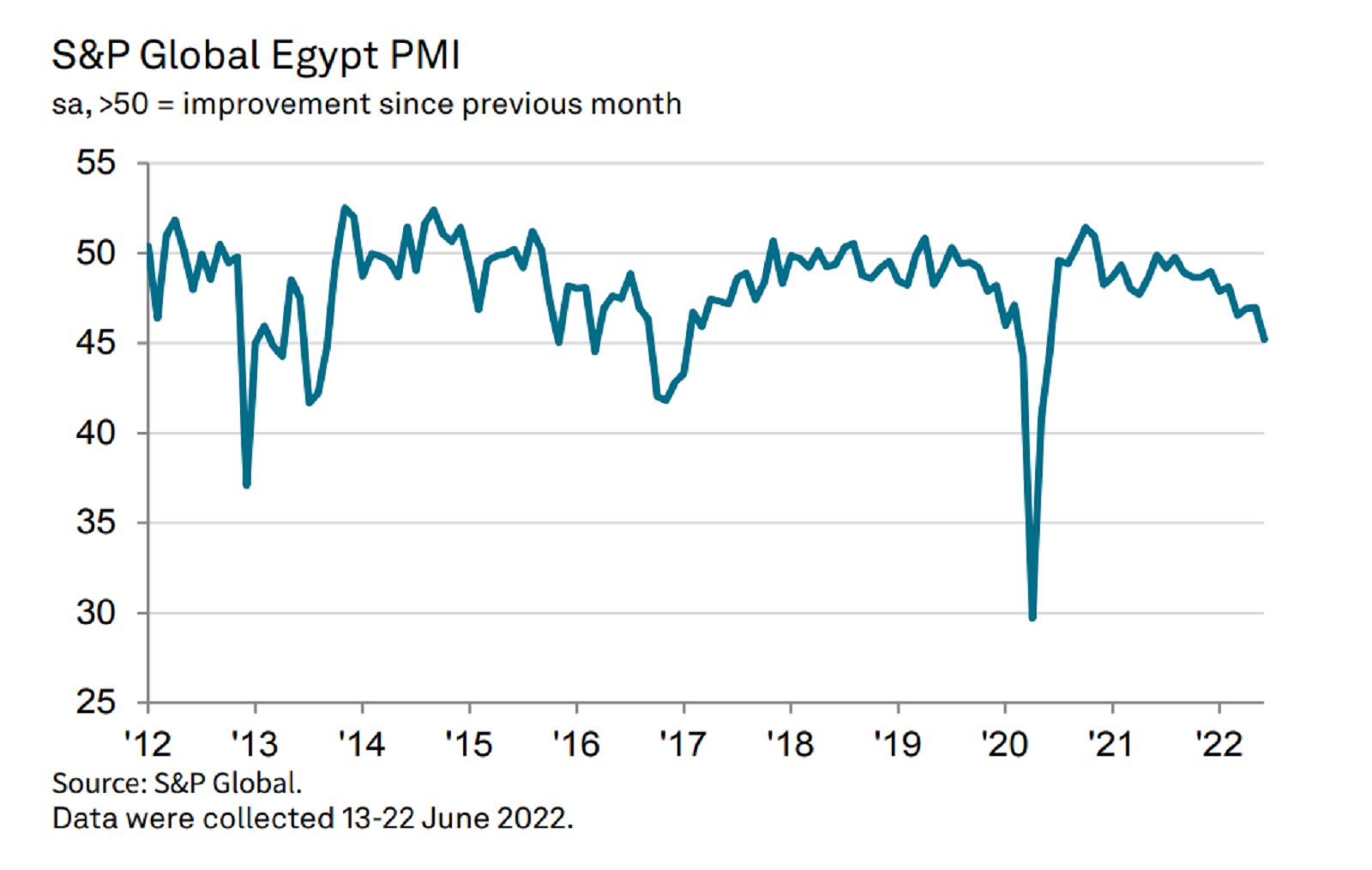 Activity in Egypt’s non-oil private sector recorded its worst performance in two years in June, contracting at a faster pace as client demand dropped on supply-side pressures, rising inflation and the devaluation of the EGP. The S&P Global purchasing managers’ index (pdf) fell to 45.2 from 47.0 in May, the lowest reading since June 2020 and marking the 19th consecutive month of contraction.

Costs rose at their fastest pace in years: The rate of input cost inflation hit its highest level in almost four years high, leading almost half of surveyed companies to report a rise in expenses. Wages are also exerting pressure, with increases hitting an eight-month high.

Businesses are done absorbing cost increases: Companies raised prices at the fastest rate since February 2017, with the month-on-month uptick in inflation “the largest seen” since the survey began in April 2011. “The sharp uptick [in output charges] suggested that firms were ready to pass on a greater bulk of their costs to customers amid sinking hopes that discounts would help spur a demand recovery,” S&P Global wrote.

Output + demand suffered as a result: Both output and new orders saw “marked contractions,” falling to their lowest levels since 2Q2020.

Inflation hit a three-year high in May: Annual urban inflation hit 13.5% in May, its highest level since May 2019, on the back of surging commodity prices and the falling EGP.

The tighter global environment is tough on us: “The Fed's latest rate rise of 75 basis points adds to these concerns,” Owen said.

Not all sectors had it bad: Business conditions in the construction sector stabilized during the month, with output and new orders even growing slightly. On the other hand, retailers, wholesale and manufacturers reported weaker sales.

The rate of job cuts slowed: Firms continued to cut staff, but at the slowest pace since March, the survey said.

Confidence rebounded after hitting record lows earlier this year, reaching a five-month high amid hopes that activity could begin to recover from its current slump. That could have something to do with the fact that inflation slowed on a monthly basis last month, leading some analysts to predict peak price hikes by July or August.

But heightened inflation looks like it’s here to stay: “The June PMI data shows that hawkish monetary policy in the US and a rising USD value is likely to keep supply-side inflation running high,” said Owen.

The story got ink in the foreign press: Bloomberg | Reuters.