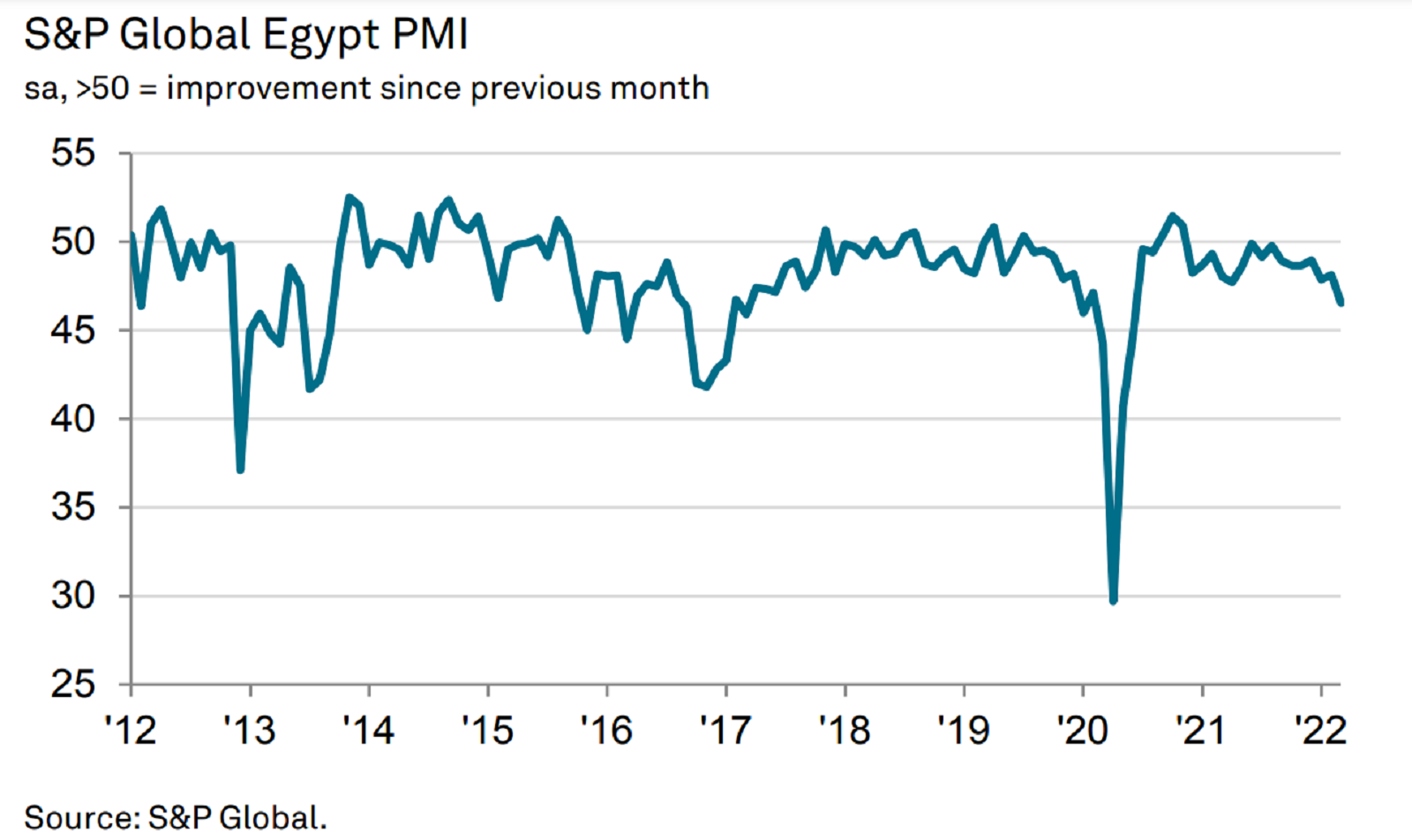 Activity in Egypt’s non-oil private sector saw its sharpest decline in 21 months in March as the effects of the Russia-Ukraine war and the devaluation of the EGP hit output and new orders, according to S&P Global’s purchasing managers’ index (PMI) survey (pdf). Rising inflation and slowing demand caused activity to decline at a faster pace last month, pushing the gauge down to 46.5 from 48.1 in February, deeper below the 50.0 mark that separates expansion from con}traction.

This is the sixteenth consecutive month Egypt’s non-oil private sector has been in contraction since mounting a brief recovery from the covid shock in 2020.

Wait, isn’t the PMI done by IHS Markit? The monthly PMI releases are now being published under the S&P brand after it completed its USD 44 bn merger with IHS Markit at the end of February. There’s plenty more here if you’re curious.

What they said: “The non-oil economy was clearly hit by the effects of the Russia-Ukraine war during March, with firms often seeing clients pull new orders back amid increased prices and economic uncertainty,” said S&P Global economist David Owen.

Output, new orders and inventory purchases saw their steepest declines since the first wave of the pandemic, driven by a fall in demand as prices rose in key areas like energy, food, fuel and raw materials. “Egyptian firms reacted to higher prices and lower demand by severely reducing their purchasing activity at the end of the first quarter,” S&P wrote.

Manufacturers + retailers were the most affected: "The downturn was clearest to see in industrial sectors such as manufacturing and construction, where businesses and clients were more greatly exposed to energy and material price rises due to the war.” Also impacted by the war: wholesale and retail firms hit by rising food prices amid disruptions to imports of basic commodities like wheat.

The 16% fall in the EGP will provide “some short-term support” but will also “likely accelerate cost pressures,” said Owen.

Businesses cut back on jobs for the fifth month running in response to falling output, according to the survey. Employment fell at the fastest rate since November but remained “modest,” S&P said.

Confidence fell to another all-time low: Outlook for business activity in the year ahead fell to the lowest level in the survey’s history for a second consecutive month. “Worries over inflation and the Russia-Ukraine war meant that hopes of future output growth were greatly depressed in March,” Owen said

The foreign press is taking note of the survey: Bloomberg | Reuters.