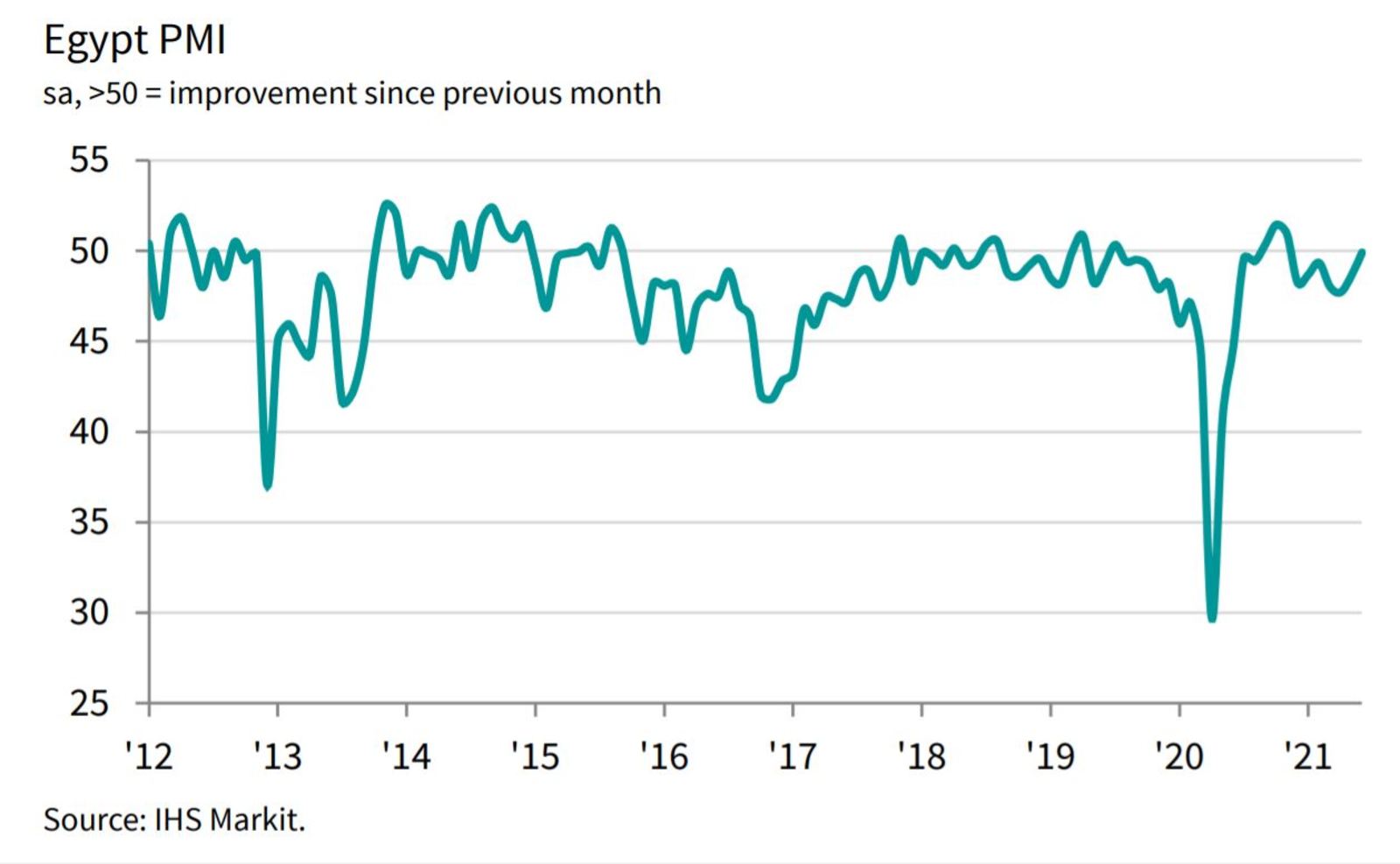 Egypt’s non-oil private sector was a dog’s hair away from expansion in June, as conditions showed signs of stabilizing at the end of 1H2021, according to IHS Markit’s purchasing managers’ index survey (pdf). The PMI gauge rose to 49.9, from 48.6 in May, only 0.1 shy of the 50.0 mark that separates expansion from contraction and to its highest level since November 2020, thanks to a pickup in output and new orders and exports and better tourism numbers. Business operating expenses, however, rose at their quickest pace since August 2019 as inflationary pressures persisted.

Sub-gauges for output and new orders rose above 50.0 for the first time in seven months. Firms said this was due to recovering conditions on the back of fewer covid-19 restrictions. “Whilst marginal, these readings pointed to an increase in activity,” IHS Markit said.

The recovery in tourism and higher exports were also drivers of the higher PMI reading. Tourist arrivals rose as a consequence of countries opening themselves up to more international travel, and export orders grew at their strongest since a record February. This helped offset weak domestic demand experienced by some of the survey participants, and meant that total new orders were on an upward trend.

On the flipside, inflationary pressures on firms were (as expected) stark, with input prices increasing at a steep level due to skyrocketing raw material prices. This was driven almost exclusively by higher commodity prices, especially iron.. However, consumer prices were disproportionately impacted as firms absorbed the higher expenses in a bid to grow their businesses. “The latest rise in cost pressures was the sharpest for almost two years, as commodity prices, particularly metals and plastics, drove a steep increase in purchasing costs,” IHS Markit economist David Owen said.

IHS Markit had warned in April that global prices had hit their highest level in a decade due to a combination of post-lockdown pent-up demand and supply constraints.

Another weak point in last month’s PMI is that employment numbers continued to fall. Some businesses made new hires, but others chose not to replace employees that had left voluntarily, compounding a streak of job losses now extending beyond a year and a half. The pickup in activity and demand wasn’t enough to reverse the trend, according to the survey. “It was the Employment Index that held back the headline [PMI] figure as job numbers continued to fall overall,” Owen said.

That said, businesses still had good things to say for the next 12 months, with nearly half of those responding to the survey penciling in an expansion further ahead. While not as optimistic as record levels reported in May, firms remained more hopeful than the survey’s historic average. Many of them cited expectations of improving market conditions as pandemic-linked restrictions continue to taper down.

PMI in the region: