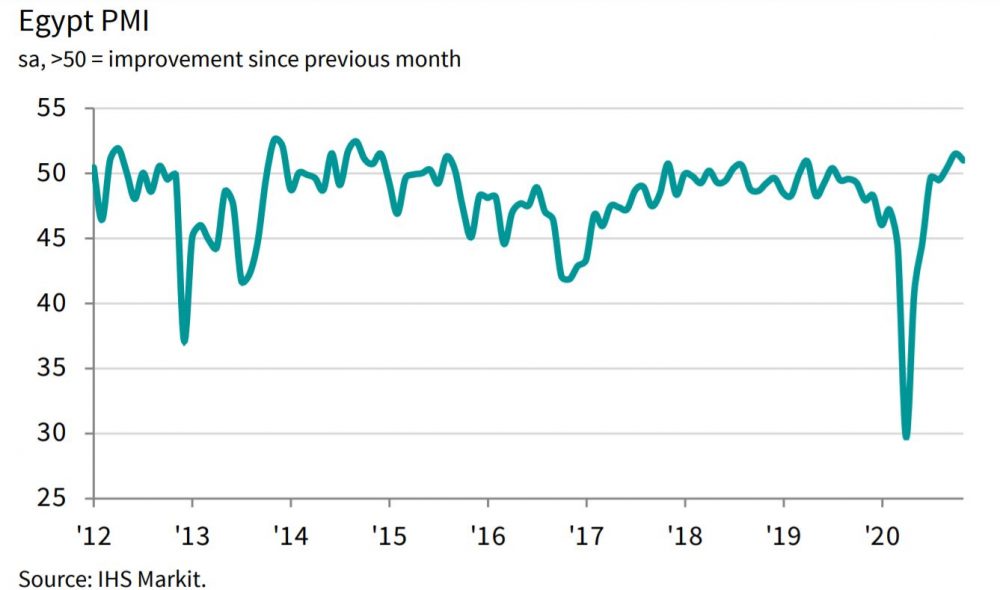 Growth in Egypt’s non-oil private sector slowed in November and business confidence fell to a record low amid fears of a resurgence of covid-19, according to IHS Markit purchasing managers’ index (PMI) figures (pdf). The PMI gauge remained above the 50.0 mark which separates expansion from contraction for the third consecutive month, but slowed to 50.9 from a near- six-year high of 51.4 in October, as growth in output and new business weakened.

But keep it in context: The private sector still grew, just at a slightly slower pace.

Fears of Lockdown 2.0 saw only 12% of respondents forecasting growth: They’re worried that stricter lockdown measures in neighboring European countries could spill over into Egypt and hamper the recovery. That has sent confidence in business activity over the coming 12 months to its lowest since the PMI survey began in April 2011, with only 12% of respondents expecting growth.

As a result, private sector companies continued to cut jobs, reducing employment levels for the thirteenth month in a row. The rate of job cuts, however, was the slowest seen throughout this period, thanks to increasing new orders and backlogs.

Supplier performance provided one bright spot, setting a joint-record indicating “a strengthening market environment,” IHS Markit said. Delivery times were cut at a rate that was “the joint-fastest” in the survey’s history. This was evidence of “a loosening of supply chain pressures after the global lockdown.”

Input purchases, and inventory levels all grew in November, with stock building speeding up to its fastest rate since September 2019. This reflected increased demand, but also expectations of input price inflation.

Meanwhile in the GCC- Saudi Arabia’s non-oil private sector showed signs of mounting a strong recovery in November, with its PMI gauge rising to a ten-month high of 54.7 in November from 51 in October, IHS Markit said (pdf). PMI figures for the UAE are due out on Tuesday. Bloomberg has more on Egypt and Saudi’s figures.