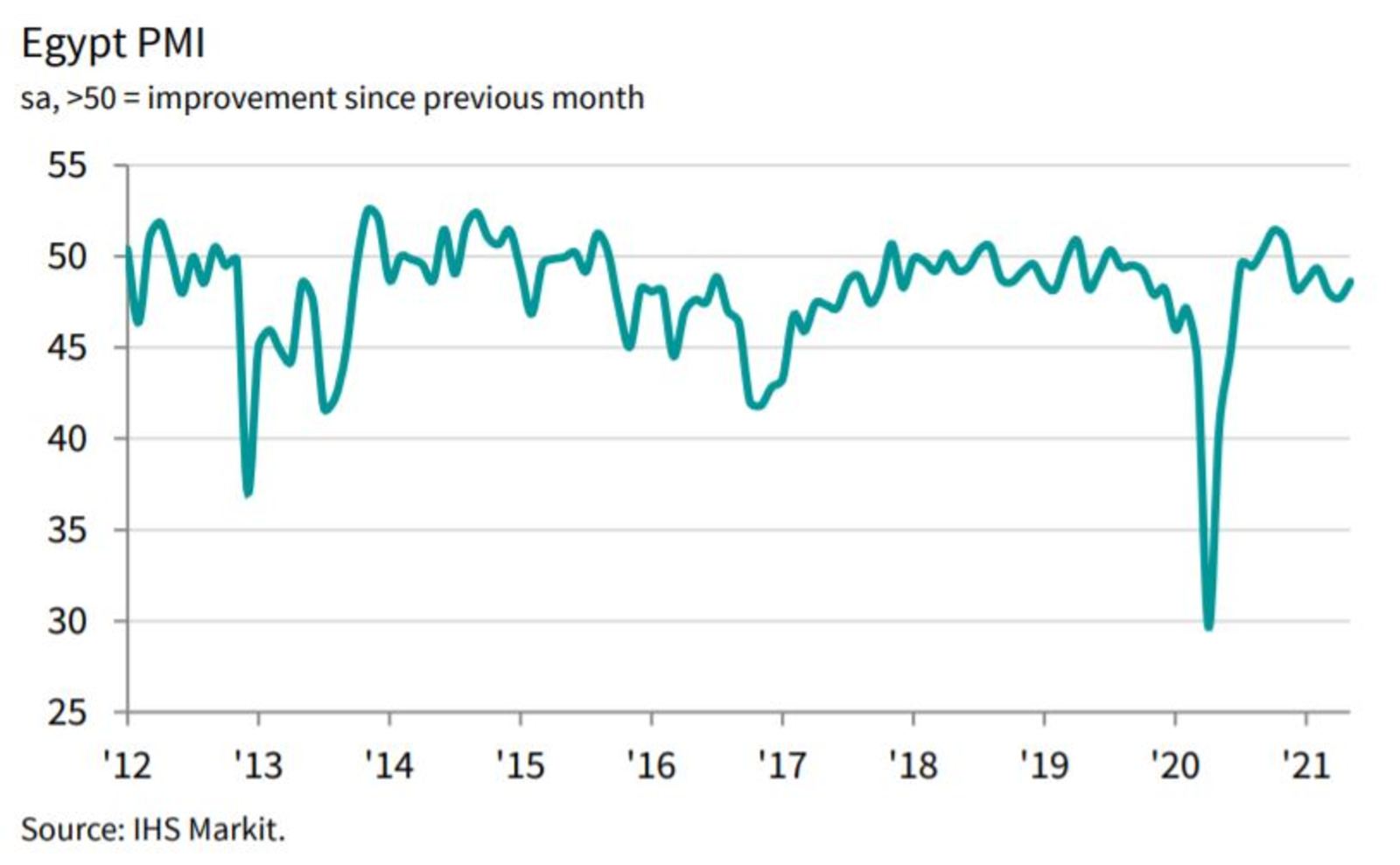 Activity in Egypt’s non-oil private sector contracted for a sixth consecutive month in May, but at a slower rate as market conditions in major areas of the economy improved compared to the past three months and as optimism reached at a new high, according to IHS Markit’s purchasing managers’ index survey (pdf). The PMI gauge rose to 48.6, from 47.7 in April, remaining below the 50.0 mark which separates expansion from contraction, due to a further, albeit milder, drop in output and new business.

The drop in output was the softest since February, when the overall gauge stood at 49.3. The same trend was seen for new orders, with businesses reporting muted demand, but to the least extent since February. The level of sales also edged closer toward stabilization, and there were major signs of improvement in new export orders, which increased solidly. Sub-gauges measuring output and new orders signalled contraction, but were at three-month highs.

Businesses slashed new input purchases as a result of the overall drop in output. But again, the rate at which purchasing activity fell was the slowest in six months and there was evidence firms are starting to rebuild their inventories. A small number of firms, however, reported a worsening of supplier lead times throughout the month.

Muted activity meant less need for capacity and contributed to a drop in employment, translating into a streak of job losses now extending beyond a year and a half. The rate of job cuts, however, has been easing since the start of the second quarter.

That said, inflationary pressures remained very strong in May. Input shortages, coupled with high freight and staff costs, meant a spike in input prices that was second-quickest since September 2019. Some businesses passed those costs along to consumers in May and others absorbed most of the steeper input prices.

But while output remains under pressure, the outlook is even better than pre-pandemic, with optimism for the coming year recording its strongest level since February 2018 among firms in the non-oil economy. A recovery in market conditions as the pandemic slowly abates was seen as a key positive driver in coming months, according to the survey. “Business expectations data offered a glimpse of a positive future, as firms were … expectant of a strong recovery in business conditions to follow soon," IHS Markit economist David Owen said.