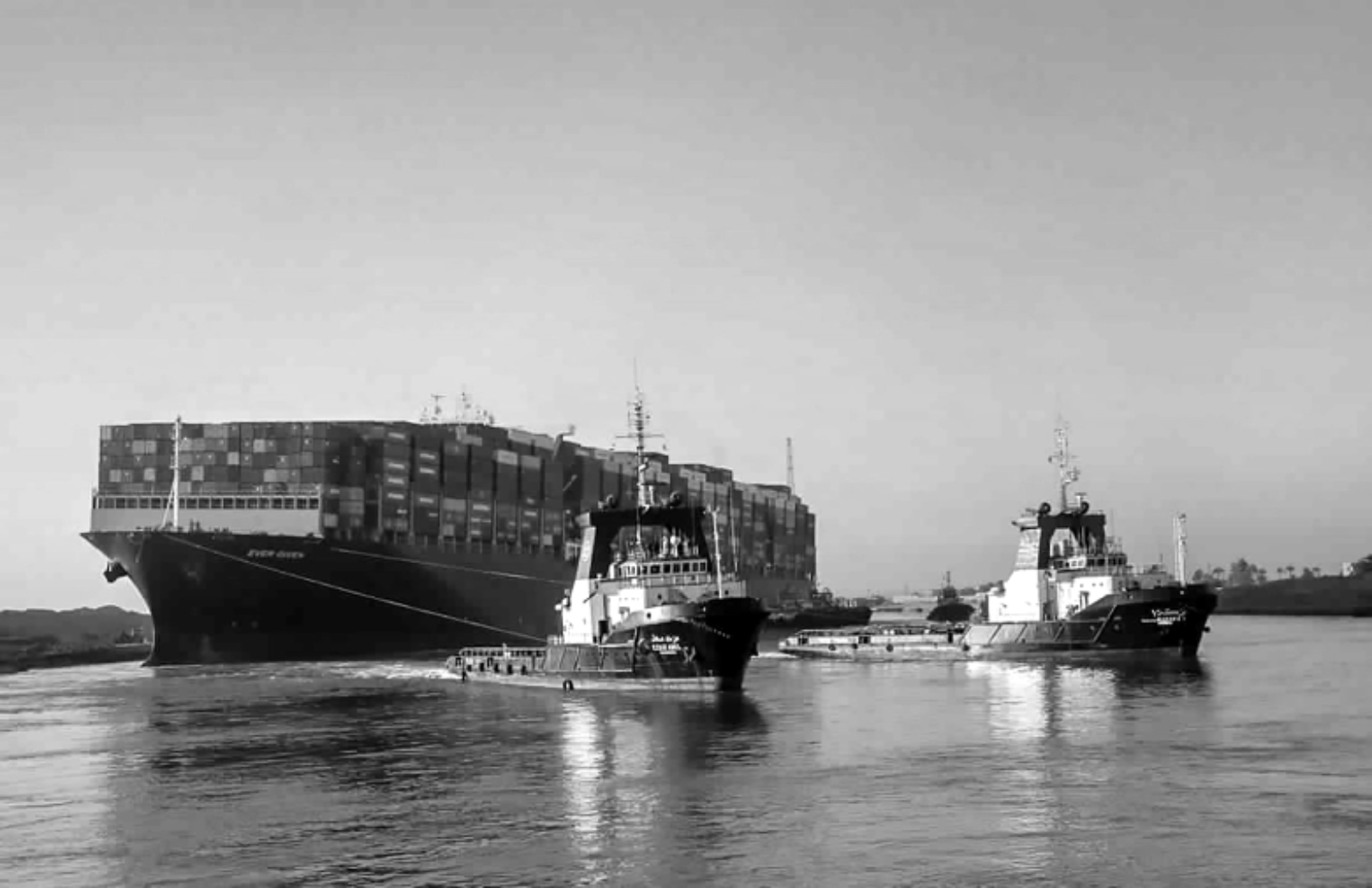 At least 113 container ships are traveling in both directions after the Suez Canal reopened to marine traffic yesterday evening, with more ships set to sail as of today 8am, Suez Canal Authority (SCA) boss Osama Rabie said at a presser yesterday (watch, runtime: 32:00). Traffic in the Canal resumed yesterday after the MV Ever Given was dislodged following six days of dredging work to create maneuvering space, along with push and tow maneuvers from several tug boats. The ship apparently did not swing back across the Canal yesterday — engineers simply put the operation on hold temporarily because of strong winds that could have caused damage to the ship, Ezzat Adel, captain of one of the tug boats that refloated the ship told Kelma Akhira’s Lamees El Hadidi (watch, runtime: 4:23).

It’s going to take three or four days to clear the backlog of 422 ships that were stalled at the Canal as they waited for the Ever Given mega-vessel to be dislodged from the Canal’s banks, Rabie said. More than four dozen ships decided to change course to take the long way around the Cape of Good Hope.

Investigations are now underway to determine the cause of the grounding, after which the Ever Given will finally leave Egypt. Initial reports show that the MV Ever Given, chartered by Taiwan’s Evergreen, became wedged sideways across the Canal after strong winds and a dust storm caused the crew to lose control of the ship as it was en route from China to Rotterdam on Tuesday morning. The investigation will also look at potential human error and will probe the ship’s captain and two pilots who were on board the vessel — who are meant to act as “consultants … to give advice, for instance on how to maneuver the vessel or what course to steer,” the Washington Post says. The Suez Canal pilots, who are required to be on board any vessel that passes through, are ultimately not liable for damages to the ship they are assigned to under Egyptian law, the newspaper notes.

Once the investigation wraps, the SCA will evaluate the necessary compensations for vessels that faced delays while the vital waterway was blocked, Rabie said. The six-day blockage of the Suez Canal has cost Egypt some USD 15 mn in foregone daily revenues, he said. Previous estimates put that figure at USD 14 mn per day. Egypt is also entitled to claim damages from the ship owner, former SCA boss Mohab Mamish reminded Ala Mas’ouleety’s Ahmed Moussa (watch, runtime: 16:52).

The good news: Egypt’s balance of payments shouldn’t see “significant disruption” in the aftermath of the Suez Canal debacle, thanks to Canal receipts faring better than any other cross-border services in the face of previous crises, Moody’s said (pdf) in a periodic review of Egypt’s credit rating, which does not involve a rating or outlook update. Suez Canal receipts remained almost stable and slipped by just 0.7% when the pandemic was wreaking havoc on global economies as it hit the world in early 2020. “We expect that other Suez Canal-reliant exporters, including oil-exporting countries in the Middle East, are unlikely to be affected in the absence of an extended disruption,” Moody’s writes, affirming Egypt’s credit rating at B2 with a stable outlook.

More good news: The resolution of the situation is expected to bolster shipping lines’ confidence in the Canal, particularly as the ship was dislodged and traffic resumed faster than initial forecasts expected, Mamish told El Hekaya’s Amr Adib (watch, runtime: 1:09).

Keep an eye on Russia, which looks to be capitalizing on the Ever Given saga to tout its own Northern Sea route as an alternative to the Suez Canal, according to Reuters. Moscow had said back in 2019 that it plans to make the route viable year-round (rather than only between July and October) by 2030, and that it could cover ins. for commercial shippers taking on risks of possible supply disruptions.

But don’t expect Egypt to dig a newer New Suez Canal in a bid to remain competitive, since the economic feasibility just isn’t there, Rabie said at yesterday’s presser.

The internet had its fun while it lasted: While holding up USD 10 bn in global trade, the stuck ship yielded some A-class memes, the Washington Post notes.

The story is still topping coverage of Egypt in the foreign press, with everyone from the Financial Times to the Wall Street Journal and Bloomberg covering the story.