Good afternoon, everyone and what a lovely sunny and clear day to kick start the weekend. Today’s weather has us playing The Peddlers on loop (listen, runtime: 3:38).

THE BIG STORY OF THE DAY here at home and abroad remains the ongoing traffic jam at the Suez Canal, with the situation still unclear as of dispatch time on when normal traffic can start to resume at the waterway. Officials are still working to move the moored container vessels. The global press, meanwhile, is still trying to count the cost of the impact of the congestion on the global economy. The situation still remains fodder for twitter comedians, and regular ones too, with the US late night talk shows chiming in, including Stephen Colbert (watch, runtime: 12:05). We have the story chapter and verse in the Speed Round below.

CATCH UP QUICK on the top stories from this morning’s edition of EnterpriseAM (that don’t have anything to do with boats lining up):

YOUR MANDATORY COVID STORY OF THE DAY- AstraZeneca revised its covid-19 vaccine efficacy to 76% in updated US trials, just slightly lower than the previously reported 79% rate of effectiveness, the company said in a statement. Earlier this week, the US’s independent monitoring board called out AstraZeneca’s analysis of the jab’s efficacy as relying in part on old data and threatening accurate efficacy figures. In response, the biopharma company released more up-to-date data from its US vaccine trial. The vaccine was well tolerated, and no safety concerns were found, the statement added. The small revision to the efficacy rate will go a long way to putting the vaccine back on track for gaining emergency authorization in the US, which the company plans to do in the next few weeks, says Reuters.

Bok, prijatelji: The Egyptian-Croatian Business Forum meets next Wednesday, 31 March, for the first time since 2010. On the table: Giving a nudge to both trade and investment, a FEDCOC statement says. The forum will take place while Croatian Foreign Minister Gordan Grlić-Radman is in town next week. Grlić-Radman and Foreign Minister Sameh Shoukry are expected to attend.

Former cabinet minister Ghada Waly will address AmCham on Sunday at 3pm. Now the executive director of the UN Office on Drugs and Crime, Waly will talk about tackling corruption in African countries and women’s rights. Tap or click here to register for the event (Zoom event, not in person).

The Arab Federation of Exchanges Annual Conference 2021 is taking place virtually on Monday and Tuesday. The conference will discuss ESGs for economic growth and capital markets as well as fintech and innovation.

Head to Sharm for a startup gathering: Investors, entrepreneurs and policymakers will gather in Sharm El Sheikh for the Startup Festival on Sunday and Monday, 28-29 March. More than 80 startups will participate in the exhibition, which will feature panel discussions and workshops.

The National Museum of Egyptian Civilization is set to open on 3 April in El Fustat. Local and international visitors alike will pay less for admission for the first two weeks to explore the museum’s central hall, according to a cabinet statement. Meanwhile, the Royal Mummies Hall will be ready for visitors starting 18 April.

AUC Press’ Mad March book sale will wrap up by the end of the month. The sale is open to the general public every day from 10am–6pm CLT at AUC Tahrir Bookstore & Garden.

Looks like ESG is just a buzz word for global banks: Global banks and financial institutions have provided USD 750 bn in financing to coal, oil and gas companies in 2020, despite many having pledged to back the Paris climate accord, according to research (pdf) done by the Rainforest Action Network (RAN). Since 2016, when the Paris Agreement was adopted, the world’s 60 largest private sector banks financed fossil fuels with around USD 3.8 tn.

RAN outs the bad actors: BNP Paribas in recent years has positioned itself as a leader in green finance and signed a UN-backed commitment to “align its portfolio” to limit global warming. On the ground, however, the French bank has recorded the largest absolute increase in funding to fossil fuel companies in 2020, with a 41% y-o-y jump to USD 41 bn, while overall pollution-contributing spending reached USD 121 bn since the Paris accord. Meanwhile, US banks such as JP Morgan Chase and Citigroup have reduced their financing to fossil fuel companies last year, but have provided a cumulative of USD 555 bn since 2016 and are in spots one and two respectively in the reports’ hall of shame.

READ MORE- We explore how some of the biggest asset managers have been using climate change as a marketing ploy. This came as the EU has taken steps to curb this green-washing.

Meanwhile, VCs have caught the ESG investing bug: There’s a new wave of investment in clean energy start-ups driven by China’s success in scaling solar power and cost reduction in wind energy and battery technology, says the Financial Times. Listed companies set to benefit from the transition away from fossil fuels are worth a collective USD 6 tn, with investors getting behind green battery metals, sustainable aviation fuel, lab-produced meat, and low carbon concrete, amidst rising concerns that climate stocks are overheating. VCs have doled out over USD 16.3 bn on climate-tech investments in 2020, according to a PwC report.

What happened during clean tech 1.0? In the last decade, green energy was touted as Silicon Valley’s next financial revolution, but “it was really a boom and bust driven by the over-allocation of venture capital,” experts tell the salmon-colored paper. China’s rapid expansion into the production of solar panels drove the cost of polysilicon down by 80% over the decade, and the need for solar energy innovation out of Silicon Valley diminished. VCs lost around half of the USD 25 bn invested in clean tech between 2006 and 2011, says PwC. By 2015, the majority of solar panels used around the world were made in China.

What’s different this time? Entrepreneurs are focused on a bigger set of challenges, they are backed by deep-pocket corporate investors promising to decarbonise their operations, and an existing market for these products is supported by government pledges to achieve net zero greenhouse gas emissions by 2050, analysts suggest. 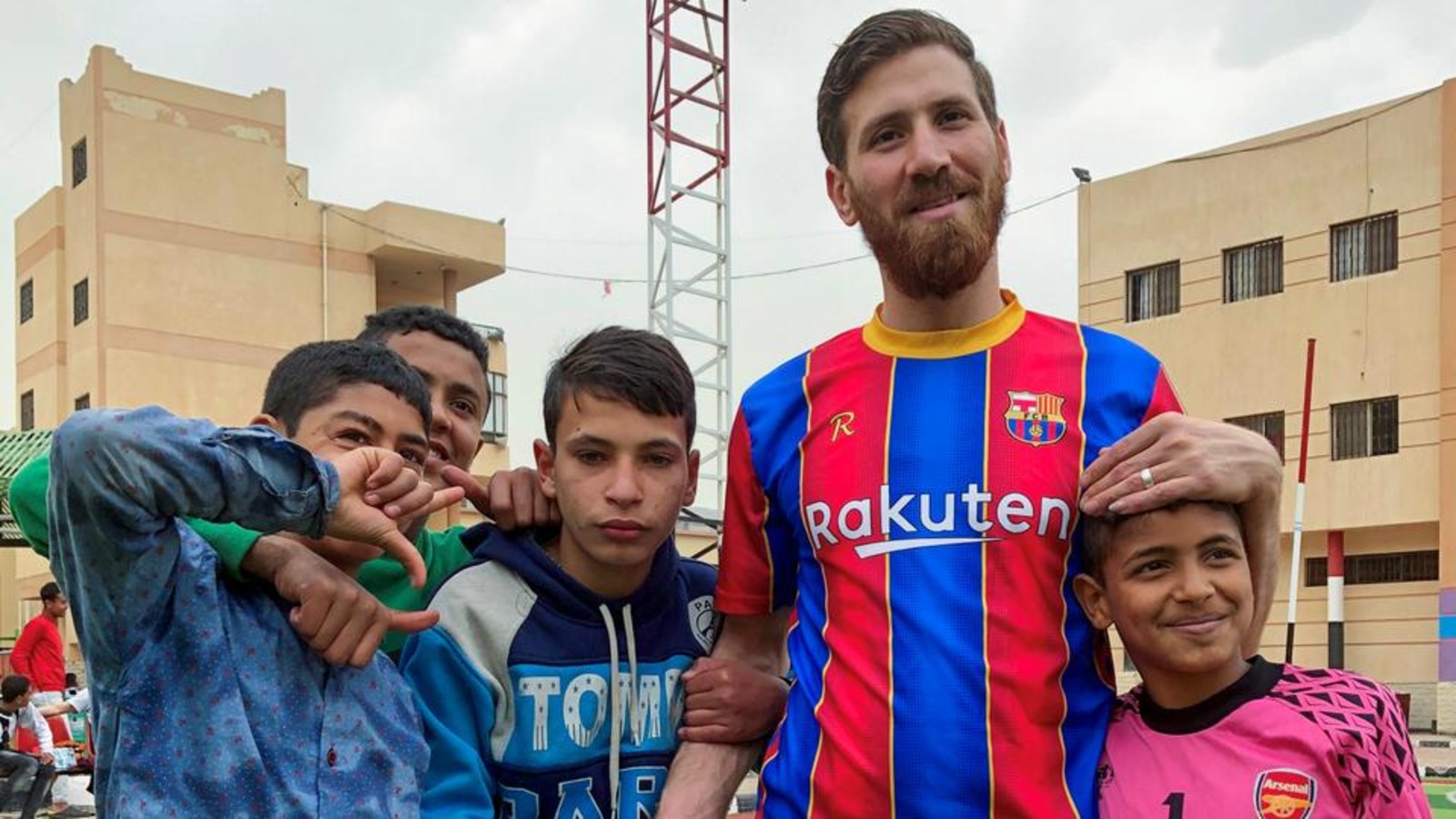 A Lionel Messi lookalike is bringing joy to children’s faces at an orphanage in Zagazig, reports Reuters. Islam Battah puts on the Barcelona football player’s jersey and makes sure to challenge the kids to a match. We’ve got to say, the resemblance is uncanny.

Wall Street: Money Never Sleeps has been added to OSN’s streaming platform. While the original took us into the depth of the corporate raider world and leveraged buyouts of the 80s, the sequel takes place squarely at the onset of the global financial crisis and Lehman collapse. The film follows Gordon Gekko (once again superbly portrayed by an aged Michael Douglas) after his stint in prison for insider trading as he tries to repair his broken relationship with his daughter by forging an alliance with her fiance, Jake (that guy from Transformers who lost his mind).

They don’t make proteges like they used to: Be forewarned, the sequel is nowhere near as good as the original, despite not being a bad way to kill a few hours. Shia Lebouf’s team up with Douglas comes across as bland and inauthentic compared to the Douglas-Charlie Sheen pair up. You can find the Oliver Stone original on Amazon Prime TV.

For the anime lovers, season two of B: The Beginning is out on Netflix. Set in a world powered by advanced technology, the anime follows genius investigator Keith Flick as he rejoins the royal police force just as serial killer "B" emerges and crime and action sweep through the nation of Cremona.

⚽ Egypt is playing against Kenya today at 6pm in the African Cup of Nations qualifiers. The Pharaohs have all made their way to Nairobi for the match where fans will not be let into the stands as a way to curb the spread of covid-19 Kenya’s Sports Cabinet Secretary Amina Mohamed said on Twitter, adding that security will be very tight. Meanwhile, Liverpool’s Mo Salah came equipped with his own tight private security force, according to Goal. Out of 23 matches with Kenya in recent years, Egypt has won 18 times, tied four times, and lost once, reports Ahram Online.

Where to get breakfast this weekend: Qahwa has been a staple of early morning breakfasts or late brunches for years now across Cairo with locations at The Waterway, Arkan Plaza, The Park at Mall of Arabia, and Tivoli Dome. From delicious salads to classic breakfast plates, Qahwa is a great place to start your day off right, especially with their signature omelettes and pancakes. We’ve also gone to Qahwa for lunch and are big fans of their chicken mushroom pasta and basically all their desserts. Make sure to top off the meal with one of their drinks. You can’t go wrong with their fresh juices or coffee options.

The grand opening of indoor bouldering arena Verge Climbing is taking place tomorrow at Club S in Allegria. Verge offers passes for those wanting to go climbing for the day or workshops to learn specific rock climbing techniques. The opening will include an art corner set up by Art Cafe, a live music performance by Beatles cover band Glass Onion, and a yoga session by Farah Ehsan. The event will be open to the public.

The Festival of the Bloom is taking place at Sheikh Zayed’s Galleria 40 tomorrow. The art, dance, and music festival will start at 2pm and boasts several art workshops and live performances.

Futureproof: 9 Rules for Humans in the Age of Automation is New York Times technology columnist Kevin Roose’s guide to how to be happy, successful humans in a world that is increasingly built by and for machines. Roose looks at people and organizations that historically thrived during periods of technological change, and uses that to set rules on how we can protect our own futures. Among the rules: be surprising, social, and scarce, demote your devices, and treat AI like a chimp army — all of which promote the idea that being more human is the way to stay relevant and compete with even the most advanced AI.

Call centers are already feeling the pinch of having to deal with AI in the time of covid. We explore the topic further in our Artificial Intelligence feature below.

🌤 TOMORROW’S WEATHER- Tomorrow should see the coldest weather we’ve seen in a while, with the mercury falling to 19°C during the day and 8°C at night, according to our favorite weather app. It will get slightly warmer on Saturday and Sunday going up to 21°C and 22°C respectively.