Foreign investors are piling into Egyptian debt: Foreign inflows into Egyptian bonds have surged to more than USD 20 bn just a few months after investors pulled USD bns during the global market panic in the spring caused by the coronavirus pandemic, Bloomberg reports. Investment in short-term Treasury bills and long-term bonds more than doubled to USD 21.1 bn as of mid-October from USD 10.4 bn in May, said Mohamed Hegazy, head of the Finance Ministry’s debt management unit.

The rush of hot money signals increased investor confidence in the Egyptian economy, Finance Minister Mohamed Maait told the Financial Times. “We see this in the reaction of investors when we go to international financial markets and in the way they receive issuances of Egyptian treasury bills,” he told the salmon-colored newspaper. The central bank has seen huge demand for EGP-denominated debt while investors lapped up the government’s eurobond and green bond issuance earlier this year. Hegazy said that the two FX-denominated sales, in addition to stable outlooks from the three major rating agencies, has only strengthened foreign inflows, which now account for 9.4% of total EGP holdings, up from 5.2% at the end of June.

Egypt was hit badly by the sell-off in emerging markets in the spring: Bondholders sold more than 60% of their holdings of Egyptian debt between February and May as investors panic-sold risk assets in response to the escalating pandemic. In March alone, foreign holdings plummeted from USD 27.8 bn to USD 14.4 bn.

The carry trade to the rescue: Investors have been drawn to EGP-denominated assets by the high yields, the stable currency and signs from the government that it was committed to further economic reform, Mohamed Abu Basha, head of macroeconomic research at EFG Hermes, told the FT. Returns offered by Egypt’s local-currency bonds remain some of the highest among emerging markets, despite the central bank’s surprise 50-bps rate cut last month, while the EGP has remained steady at 15.654, gaining more than 3% since its nadir of 16.168 in June.

Debt diversification is gaining pace: The government is following through on its plan to issue more longer-term debt. By the end of September, Treasury bonds accounted for 71% of its net issuance, compared to just 20% three months earlier. As of the end of June, average maturities were 3.2 years, up from 1.3 years in the same month of 2013, Hegazy said. It is hoped that by issuing greater quantities of long-term bonds, which typically carry lower rates of interest, the government will lower its borrowing costs. 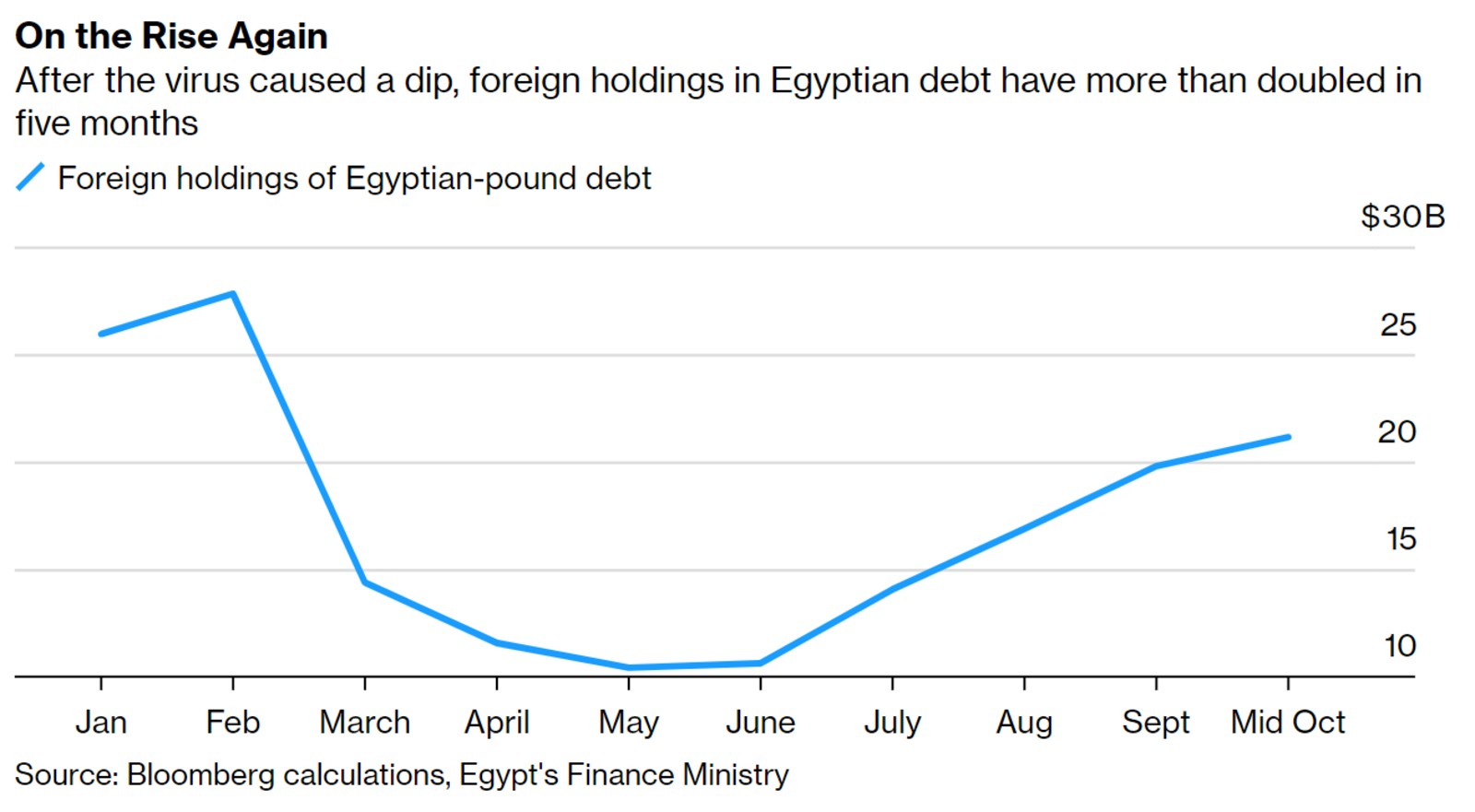 Egypt’s recent loan agreements with international lenders has also been a stabilizing factor. The two loans secured from the IMF — the USD 2.8 bn rapid-financing instrument and the USD 5.2 bn standby loan — helped to prevent the pandemic from inflicting serious scars on state finances, providing emergency support for health and social programs, and keeping the budget and balance of payments deficits in check.

…as has economic growth, which is likely to come in at 2.8-3.5% during the current fiscal year, Maait told the FT. Egypt has remained the only country in the region to avoid an economic contraction this year, despite suffering through a three-month lockdown and seeing its tourism industry brought to a standstill by the collapse in international travel. The World Bank now sees the economy growing at a 2.3% clip this fiscal year before expanding to 5.8% the following year. Earlier this month the IMF revised upwards its 2020 growth forecasts to 3.5% from the 2% it forecast in June.

And the budget deficit is narrowing slowly but surely, though the minister acknowledged covid-19 was slowing growth targets. “It is true corona is slowing us down in reaching our aim, but we continue to reduce the deficit … If I compare with others … their deficit has increased,” he said. The deficit has widened to 7.9% of GDP from 7.2% in FY2019-2020, and the IMF sees the trend continuing this year, reaching 8.1% by the end of FY2020-2021 before rapidly falling to 5.2% the year after.

How Egypt dodged a recession: The shift in outlook is due to the government’s increased spending on infrastructure as well as central bank measures which include interest rate cuts. Abou Basha told the FT that the resumption of public spending after a pause in April was key, while Maait said the government would continue to boost the economy by extending its EGP 500 monthly stipend for informal workers till the end of the year, as well as disbursing export subsidies.

Going forward: In IMF and World Bank meetings last week, Maait outlined Egypt’s strategy of prioritizing investment in transport, renewable energy and oil and gas, and told the FT of plans to increase exports and fund new tourism initiatives. In the interview though, the minister acknowledged fears that a return to normality may be much further away than initially thought, echoing the refrain that “people will have to learn to coexist with the virus.”