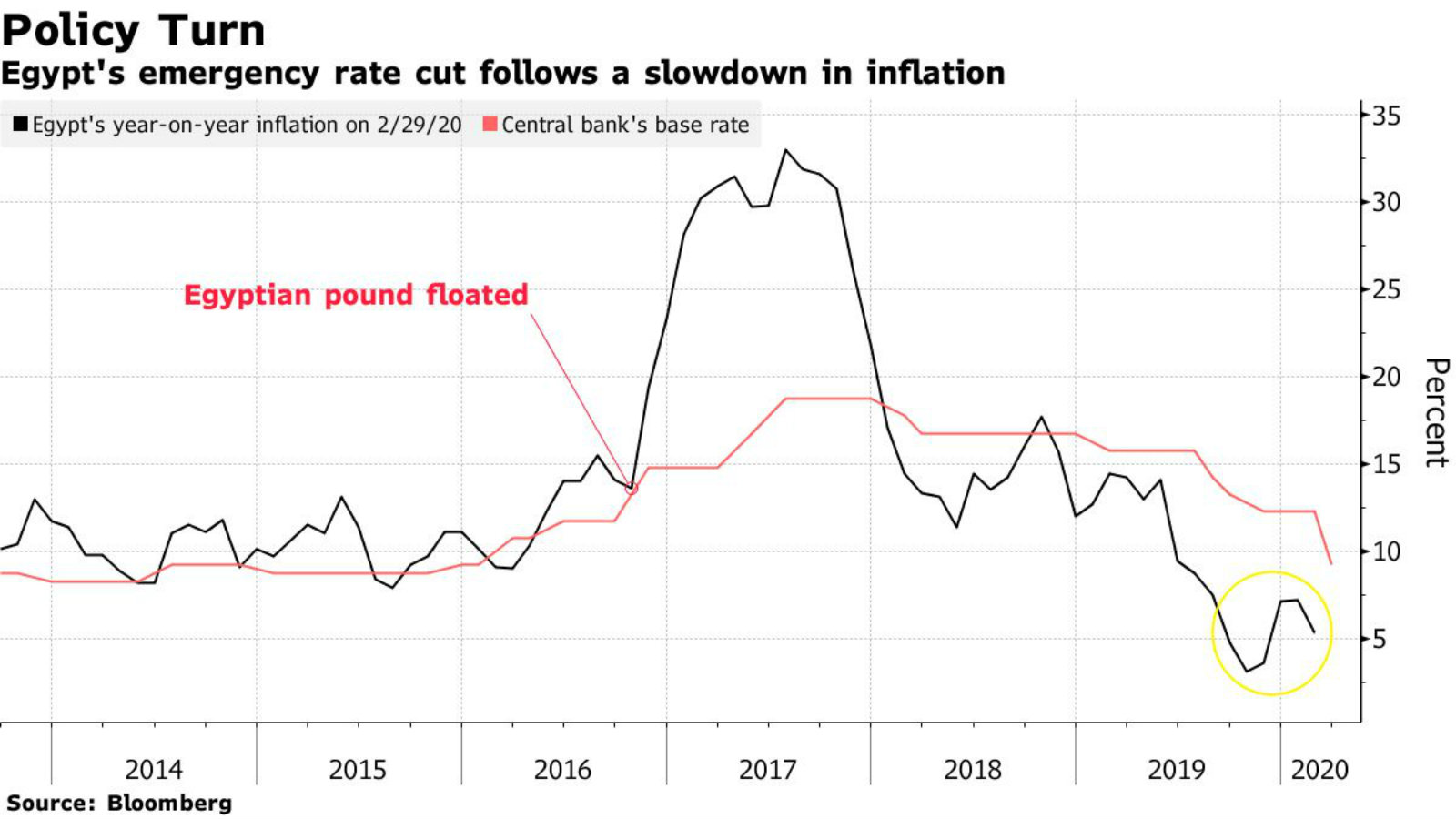 The CBE has made its biggest rate cut on record, saying the move is to protect economy from covid-19 outbreak: The Central Bank of Egypt (CBE) slashed interest rates by 300 bps during an emergency meeting yesterday, it announced yesterday evening in a statement (pdf). The central bank’s Monetary Policy Committee (MPC) was due to review rates on 2 April, but announced what it said was a “preemptive decision” that would provide “appropriate support” to the economy amid the global covid-19 outbreak and its economic implications.

Where rates stand now: The CBE’s overnight deposit rate fell to 9.25% from 12.15%, the first time it has been in single digits since March 2016. The bank’s lending rate is now 10.25%, and the main operation and discount rates are both at 9.75%. The central bank had left rates on hold during its past two meetings, having lowered them by 450 bps between February and November last year.

What the CBE said: “The MPC’s preemptive decision provides appropriate support to domestic economic activity given the current challenging external environment, while the inflation outlook remains consistent with achieving the inflation target of 9% (+/-3%) in 4Q2020,” it said in the statement. “The MPC will continue to closely monitor all economic developments and will not hesitate to adjust its stance to achieve its price stability mandate over the medium term.”

CBE Governor Tarek Amer acknowledged the seriousness of the measures, describing it in remarks to reports last night as a “sacrifice to support the Egyptian economy.”

Amer also said the central bank is extending the tenor of all bank loans for a period of six months. The extension applies whether the facility is held by an SME, a large corporation or an individual borrower.

“It is a very bold and unexpected move,” Radwa El Swaify, head of research at Pharos Holding, told Enterprise. “This will reflect positively on economic growth and the industrial sector and the budget deficit, and potentially on the EGX.”

The jury is out on whether the rate cut would stimulate new investment: Muharram Hilal, vice president of the Investors Union, said it is way too early to start forecasting whether the lower interest rate environment will spark investment given the uncertainty over how the covid-19 outbreak will hit the economy.

What about the hot money? The deep rate cut suggests the central bank has shifted focus from the carry trade to supporting the real economy, said Abou Bakr Imam, head of research at Sigma Securities.

The emergency cut is not likely to cause a significant dip in the EGP-USD exchange rate, especially after the US Federal Reserve on Sunday cut its benchmark rate to zero, said Hany Genena, head of research at Prime Holdings. The EGP has gradually eased against the greenback since the global crisis intensified after surging more than half a pound during the first seven weeks of the year. The currency remained steady at 15.69 yesterday, having dropped 20 piasters since its peak on 23 February.

EGP debt remains “relatively attractive,” HC Securities said, but foreign bondholders are likely to continue offloading Egyptian debt as concerns over covid-19 grow around the world. The interbank market will likely pick up the slack, Monette Doss, vice president of research at HC Securities, told Enterprise. Yields on Egyptian government debt will remain “relatively attractive” following the rate cut, offering a 0.95% real interest rate (accounting for the 3% rate reduction and HC’s forecast for 9% inflation through 2020) compared to 0% for Turkey, she said.

Yields jump as investors fret over covid-19: Yields on nine-month and seven-year treasuries jumped during auction yesterday as investors grew more concerned about Egypt’s exposure to the covid-19 outbreak. The yield on nine-month bills rose 93 bps to 15.273% — with the government selling just EGP 4.2 bn of the EGP 10.5 bn offering — and the rate on seven-year notes jumped 67 bps to 14.653% — selling EGP 1.2 bn of the EGP 3.5 bn on offer. The yield on three-month bonds fell marginally to 12.892% but the government was only able to offload EGP 92 mn of the EGP 4 bn offering after investors demanded an average yield of 15.857%. The government cancelled its EGP 4 bn auction of three-year bonds and reduced its seven-year offering by 66%, Al Mal reported.

We probably haven’t seen the last of CBE stimulus:

Calls for the CBE to rethink manufacturing support initiative: Magd El Manzalawi, head of the industry committee at the Egyptian Businessmen’s Association, called on the CBE to rethink the subsidized rates of interest offered under its EGP 100 bn program to support manufacturers. The initiative provides loans to medium-sized factories with a preferential 10% rate of interest. Now with interest rates 3% lower, Manzalawi said the program no longer provided benefits to the manufacturing sector, and called on the CBE to reduce the interest by 300 bps to 7%.

The story is getting coverage in the international press, most notably from Bloomberg and Reuters.