CBE cuts rates by 100 bps, in line with market expectations: The Central Bank of Egypt’s Monetary Policy (MPC) cut interest rates by 100 bps on Thursday, the CBE said in a statement (pdf). The central bank cited inflation’s continued deceleration in October, with annual headline inflation hitting its lowest since December 2005, as well as employment dipping in 2Q2019 and stabilizing real GDP growth. The MPC also factored in accelerated global monetary easing as a result of the weakening expansion of economic activity. This is the third consecutive rate cut in an easing cycle that has seen the central bank cut rates by 350 bps since August, and 450 bps over the course of the year.

The move was not a surprise to most: Five of the six economists surveyed in our Enterprise poll ahead of the meeting had anticipated a 50-100 bps cut. Renaissance Capital was the only research house we surveyed that expected the CBE to keep rates on hold. Polls by Reuters and Bloomberg had similar results.

Analysts are divided on whether the MPC have afforded to be more aggressive in its penultimate meeting this year: Signet’s Angus Blair tells Reuters he believes the CBE could have gotten away with a “more aggressive” rate cut in light of Egypt’s inflation cooling quickly, while Naeem Brokerage’s Allen Sandeep tells the newswire he sees the 100 bps cut as more “prudent” and “sustainable.” Blair had also been hoping for a deeper cut at the MPC’s last meeting in September. 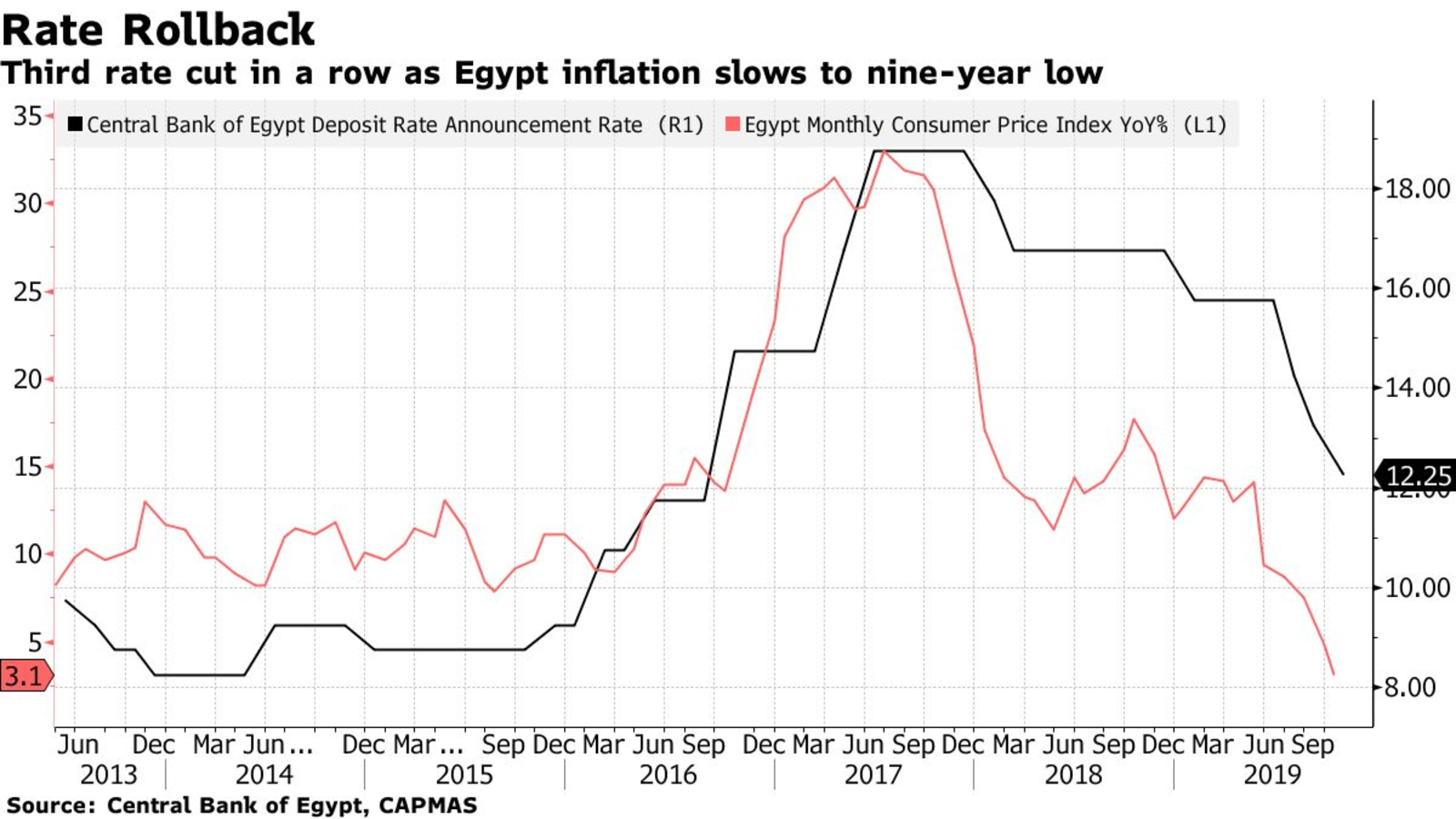 Is corporate borrowing for capex finally going to be unlocked? Our survey of nine companies across several industries earlier this year found that businesses are waiting for interest rates to fall within pre-float levels of 10-13% before ramping up capex borrowing. Lending rates are currently just 25 bps shy of the upper limit of that range. Rates dropping to almost where they were before Egypt’s IMF-backed economic program will “provide support for a gradual recovery in private investments,” EFG Hermes’ Mohamed Abu Basha tells Bloomberg. Beltone, meanwhile, sees a “moderate recovery” in capex borrowing as private demand growth gradually picks up.

The CBE probably won’t squeeze in one more rate cut when it meets again next month, Goldman Sachs said in a report, according to Bloomberg. The investment bank says it expects the CBE to resume its easing cycle next year “barring any material changes to inflation expectations.” Prime Holding is also forecasting this will be the final cut of the year. The CBE will likely pause to see how the easing affects inflation and capital inflows into Egyptian debt before it moves forward with further cuts.

The carry trade isn’t losing its luster just yet: Yields on Egyptian debt will remain attractive to investors even after last week’s rate cut, particularly as the US Federal Reserve cut interest rates one week earlier, Pharos Holdings’ head of research Radwa El Swaify tells Reuters. Swaify also cites the EGP’s YTD strength against the greenback as another reason for foreign investments in fixed income to remain unaffected. At the same time, the rate cut will help to alleviate the burden of the government’s debt service costs, Swaify says. “With a global move toward easing, Egypt has leeway to cut while keeping its debt yields attractive,” Bloomberg says. Egypt’s steep inflation slowdown has kept our real interest rates among the most attractive in the world, outmatched only by Argentina, Bloomberg said last week.