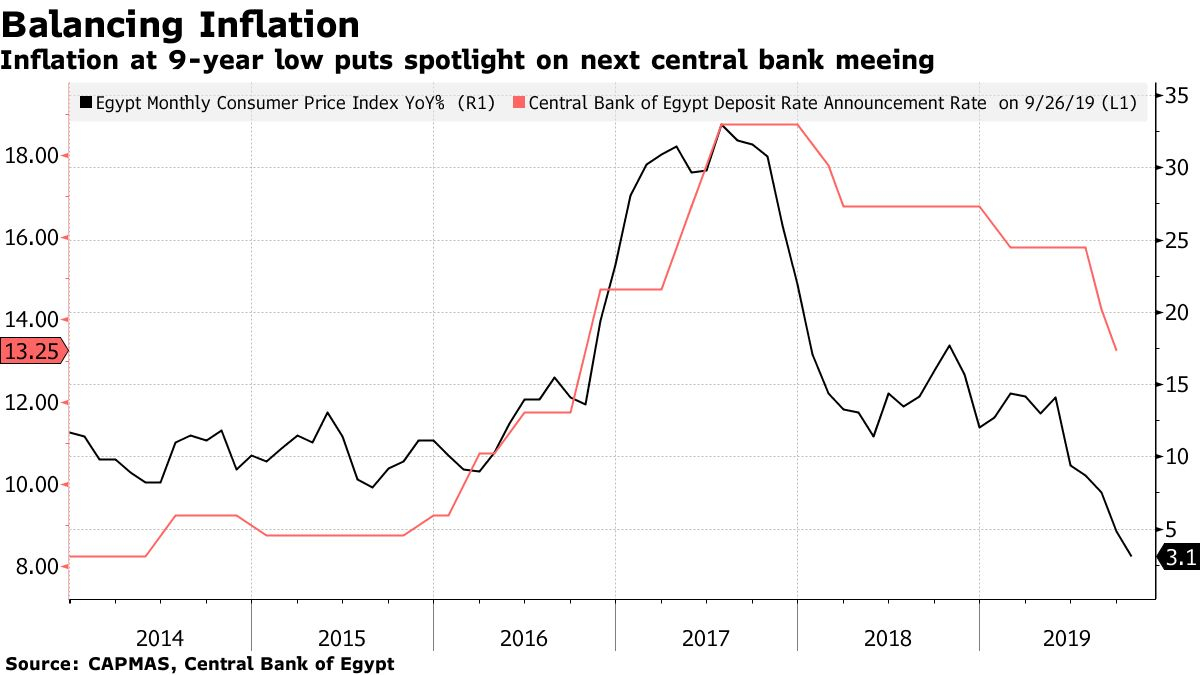 Headline inflation cools again in October, ramping up expectations of a rate cut this week: Egypt’s annual headline inflation rate dropped for the fifth consecutive month to its lowest level in nine years, hitting 2.4% in October from 4.3% in September, according to Capmas data (pdf) released yesterday. Annual urban inflation decelerated to 3.1% from 4.8% the month prior. Reuters also has the story.

Prices of education goods and services soar as food and beverage inflation continues to cool: October inflation was primarily driven by a 28.9% y-o-y increase in the prices of goods and services in the education sector, including textbooks and stationery. Meanwhile, after being the key culprits of inflation over the past several months, food and beverage prices dropped 2.1% y-o-y. Pharos’ head of research Rada El Swaify had said last month that the government’s efforts to maintain food supply levels to put a cap on price volatility has helped inflation levels to beat expectations for several months.

We again have a high base effect to thank, but that factor could soon fizzle, Naeem Holding’s Allen Sandeep tells Bloomberg. He says that it remains unclear whether the CBE will maintain its aggressive easing cycle as the high base effect “should last just a few more months.”

Everyone and their mother has priced in a rate cut this week: Inflation hitting a new low has made it all the more likely that the CBE will move to cut rates again when it meets at the end of this week on Thursday, 14 November. Five of six economists we surveyed last week are calling a rate cut this week, El Swaify tells Reuters she expects a 100 bps rate cut, which Shuaa Securities’ Esraa Ahmed had also penciled in last week in our interest rate poll.

The dissenters: CI Capital’s Noaman Khalid tells Bloomberg he expects the CBE to keep rates on hold this week and at its next meeting on 26 December. Khalid warns that the central bank should slow down the pace of rate cuts to be able to correctly measure the impact its past easing decisions have had on the economy, while also leaving room down the road for more cuts if need be. Renaissance Capital had also told us last week it expects rates to remain unchanged on Thursday.