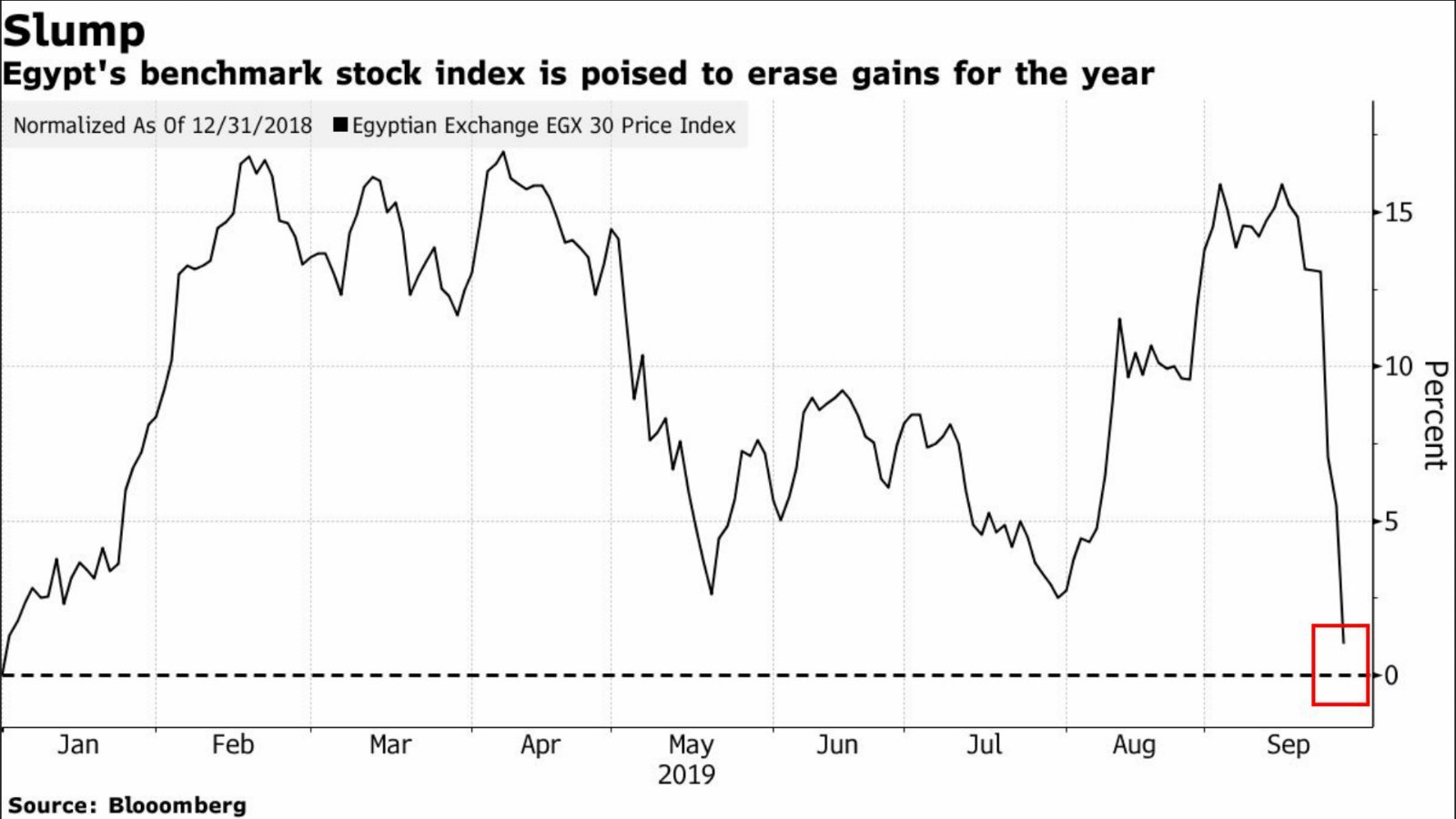 EGX share slide continues, nearly wiping out 2019 gains: The sell-off on the EGX accelerated yesterday, as investor concern about the impact of protests last weekend almost wiped out the index’s 2019 gains. The benchmark EGX30 index fell 4.2% in a third successive day of losses after dropping 5.3% on Sunday and 1.5% on Monday. This week has seen the index post its longest losing streak in four years; it would need to fall again today and tomorrow to match its worst streak in 2011, Bloomberg noted.

Foreigners are leading the sell-off: “Today, the sell-off was again led by foreigners who were net sellers. They accounted for 27% of the total turnover,” said Allen Sandeep, head of research at Naeem Brokerage. With calls for further protests on Friday, the prospect of escalation is a concern for investors. “What happened over the weekend was very minimal, but with what happened over previous experience, everyone is being very cautious. That’s why everyone’s cutting risk,” said Ashraf Akhnoukh, director at Arqaam Capital.

The government made clear yesterday it’s staking the long view on stake sales and IPOs of state-owned companies. Prime Minister Moustafa Madbouly said yesterday his government plans to sell stakes in five or six major companies on the EGX before the end of the fiscal year next June, according to a statement from the prime minister’s office in which the PM also called on the private sector to ramp up its investment in the domestic economy. The release came after the trading session closed and followed several news and TV reports that the government has finalized procedures for state companies due to hit the EGX with additional stakes before the end of the year.

Meanwhile, government-issued USD bonds came under pressure in the secondary market for a second day, with longer-dated issues all falling more than USD 0.01 to their lowest point in around a month, Refinitiv data cited by Reuters shows.

The EGP also continued to soften against the USD: 12-month non-deliverable forwards on the EGP ticking to 18.51 to the USD compared with 18.38 the day before, while greenbacks were changing hands for EGP 16.32 at the banks compared to EGP 16.29 the day before.