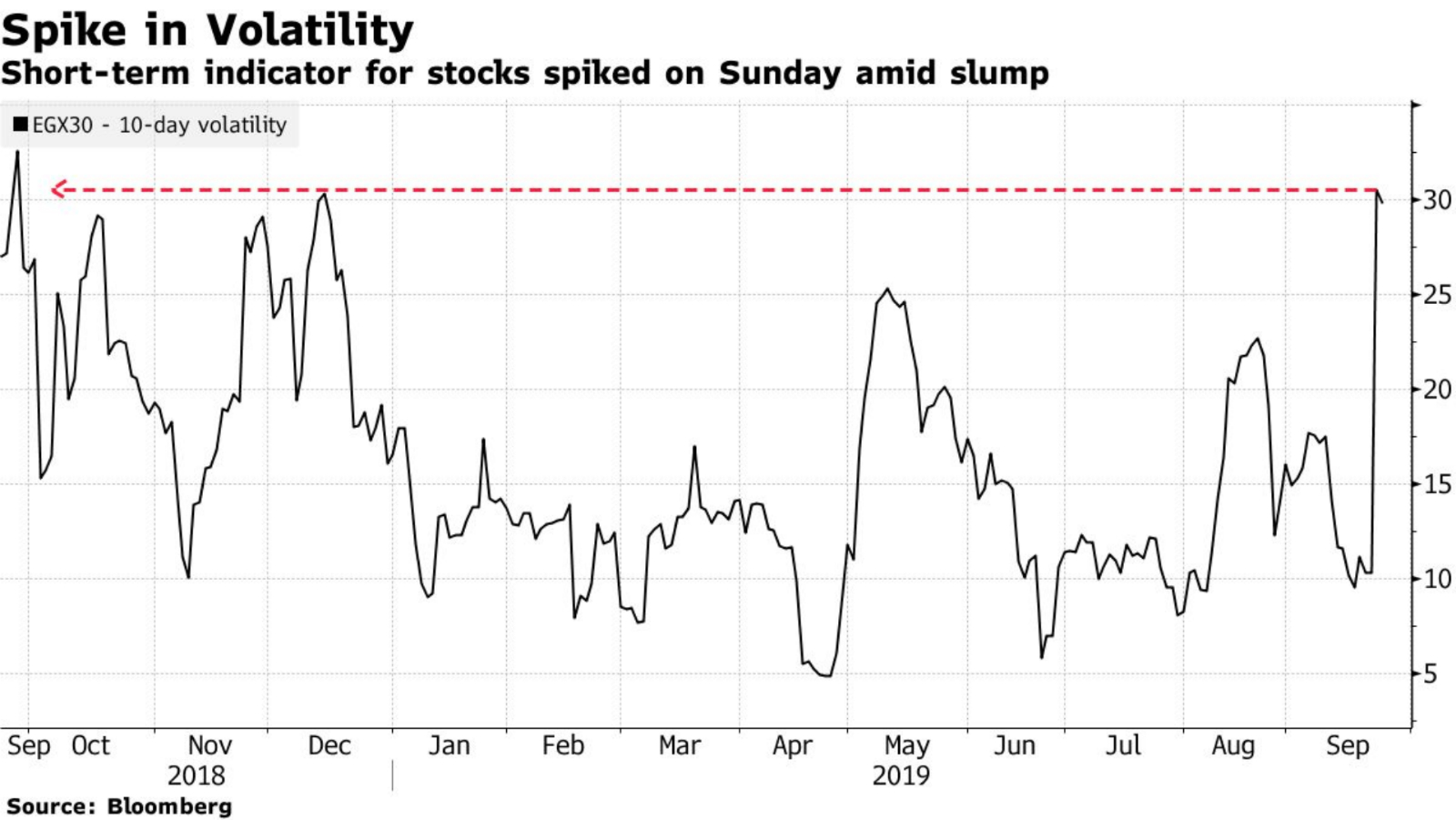 Shares on the Egyptian Exchange slid again yesterday as investors and the business community alike continued to wrestle with the meaning of anti-government protests this weekend. The benchmark EGX30 fell another 1.5%, extending a sell-off that saw the index shed 5.3% on Sunday. Steel companies were among the hardest hit, with Egyptian Iron & Steel down 7.0% and Ezz Steel off 6.3%. Orascom Investment Holding was the day’s biggest loser, shedding 7.3%.

Lest we forget, the EGX has been one of the best performing indexes this year: “It should be still kept in mind that EGX 30 is one of the global outperformers… the reason for the outperformance being strong structural reforms undertaken by the government,” Century Financial’s Arun Leslie John said.

Egyptian USD bonds, ETF dropped: The 2049 USD bond dropped 3.1 cents to 106.1 cents in the USD, and the 2040 bond fell 1.9 cents to 96.7 cents, Reuters reported, citing Refinitiv data. Egypt’s domestic and external bonds “may come under some pressure in the coming days,” Goldman Sachs said. The VanEck Vectors Egypt Exchange-Traded Fund (EGPT), the only Egypt ETF trading in the US, dropped 6.2% yesterday “and broke below both its short- and long-term trendlines at the 50- and 200-day simple moving averages,” according to ETF Trends.

Meanwhile, the 12-month non-deliverable forwards on the EGP spiked to 18.38 to the greenback from yesterday’s spot rate of EGP 16.29, marking the biggest rise since March 2017, according to Bloomberg — meaning the market sees the EGP coming under pressure in the period ahead.

Is there more to this than just protests? Protests this past weekend coincided with a number of factors that have combined to increase market volatility, Shuaa Securities’ head of research, Amr Elalfy, wrote in a note yesterday. Rates on Egypt’s five-year credit default swaps have risen sharply since the attacks on Saudi Aramco’s oil facilities last week, which historically has negatively correlated with share prices. Stocks have also been de-rated in light of last week’s appreciation of the EGP and forecasts for continued strengthening before the end of 2019.

Either way, a new round of sustained protests is unlikely to do much good for the economy, Jason Tuvey, senior EM economist at Capital Economics, wrote in a note yesterday. “Past experience suggests that this would be disruptive for the economy and government efforts to quell unrest, such as fiscal loosening and keeping a tight grip on the currency, could fuel a renewed build-up of macro imbalances. Structural reforms needed to boost productivity growth and living standards would be put on the backburner,” he said.