Non-oil business activity continues to fall in July — but is inflation beginning to ease? 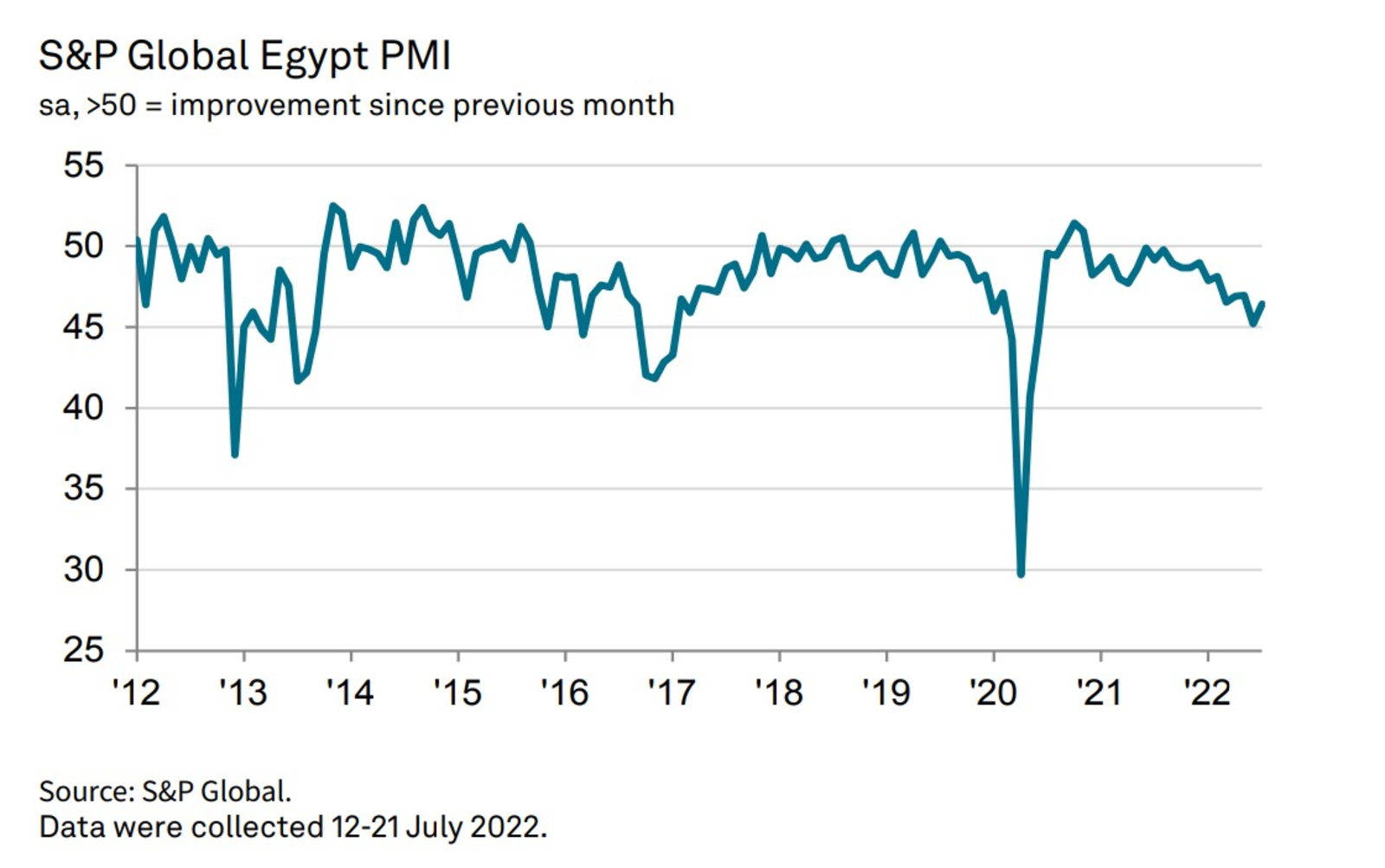 Activity in Egypt’s non-oil private sector continued to contract at a rapid pace in July as high inflation weighed on demand and output, according to the S&P Global purchasing managers’ index (pdf). Business activity fell at a slightly slower pace during the month amid signs of softening inflation, though the reading was one of the weakest since the pandemic hit the economy in 2Q 2020. The index rose to 46.4 last month, up from a two-year low of 45.2 in June, marking the biggest increase in the index in just over a year, though still below the 50.0 threshold that separates growth from contraction. This is the 20th consecutive month that activity in Egypt’s private sector has declined..

There’s cause for optimism on inflation: July’s PMI signaled “a softer decline in the health of the non-oil economy,” said S&P Global economist David Owen (My Morning Routine). “Good news was seen in inflation metrics, which dropped sharply at the start of the third quarter as fewer companies saw a rise in input costs,” he said. Some 29% of companies reported rising input costs during the month, down from 45% in June, suggesting that the recent cooling of commodity prices is having an impact on business costs.

Headline inflation has risen to three-year highs this year as global headwinds spurred by the conflict in Ukraine and the pandemic have hit home, putting pressure on the EGP and causing food, energy and raw materials prices to surge. Inflation slowed for the first time in seven months in June, though analysts expect it to pick up again in the coming months.

Demand hit as firms pass costs to customers: Businesses continued to pass higher input costs onto consumers in July, hiking prices at the second-quickest rate in four years, according to the survey. This had knock-on effects on demand that saw output and new orders fall for another month, albeit at slower rates than in June when they hit their lowest levels since 2Q 2020.

Businesses aren’t feeling optimistic: Confidence fell to one of its weakest levels on record after rising to a five-month high in June. Only 13% of companies forecast output growth over the coming year.

Also from the survey:

The story got ink in the foreign press: Reuters.

Private sector activity in the UAE continued to grow in July as demand strengthened despite inflation. The PMI (pdf) rose to 55.4 from 54.8 in June thanks to strong sales growth caused by companies absorbing higher costs and cutting prices to remain competitive.

The Saudi private sector continued to grow at a fast pace though the PMI (pdf) slipped slightly to 56.3 from 57.0 in June. Job growth registered its fastest pace since September 2019 as new business expanded on the back of higher demand, though prices continued to rise.