With Egypt as a superstar, global interest in frontier market debt is on the rise 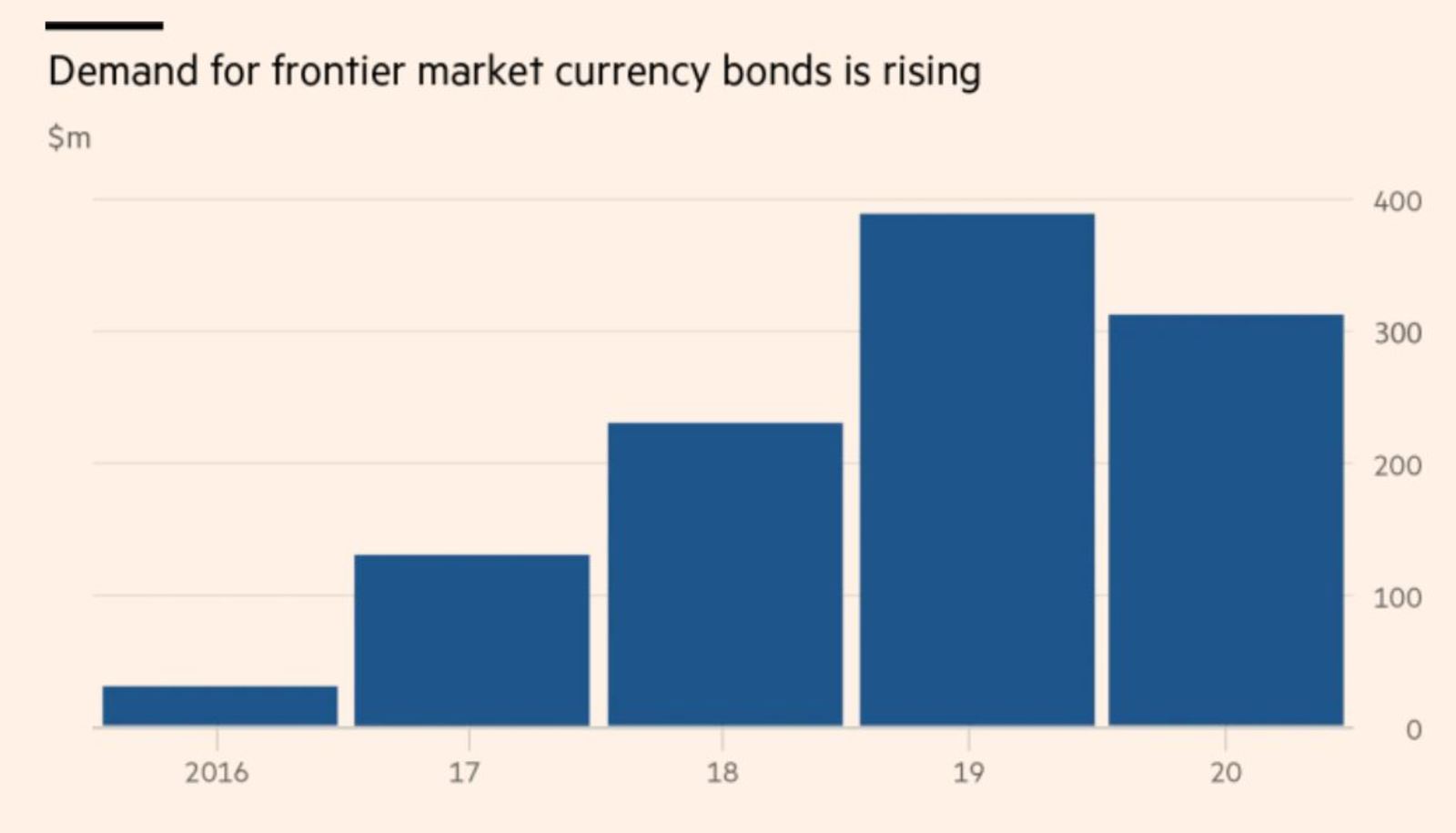 Global interest in frontier market debt is rising as investors search for higher-yielding assets, the Financial Times reports. Craig McLeod, head of emerging markets at electronic bond trading platform MarketAxess, says that the world of low interest rates and diminishing returns in traditional fixed-income markets is pushing investors to look further afield to markets that were once entered only by the most adventurous. “A couple of years ago I would talk to three of the largest asset managers about frontier markets. That’s expanded to nearly all of our clients this year,” he told the salmon-colored paper.

The returns are a lot higher: Investors are increasingly looking to markets like Egypt, Kazakhstan and Serbia, whose short-term bonds provide returns of up to 8%, while local-currency bonds from frontier markets pay an average yield as high as 9%. By contrast, the average coupon rate for bonds sold by conventional EM governments is lower than 5%, according to the JPMorgan GBI-EM global diversified index.

New frontier market bonds, indices: The European Investment Bank this week issued its first-ever bond backed by Georgia’s local currency GEL. TCX, which participated in 100 of the 270 frontier currency-linked bonds sold in 2015, also recently launched an index that tracks bonds issued by EM-focused development lenders such as the European Bank for Reconstruction and Development and the African Development Bank. In both cases, the organizations responded to “growing demand for and larger transactions in local currency offshore markets,” says Matthijs Pinxteren, director of treasury at Dutch development bank FMO.

Eyes on the Fed: While appetite for frontier local currency bonds is currently high, how long this lasts will depend on how investors think the Fed will respond to higher inflation, Renaissance Capital’s global chief economist, Charles Robertson, said. A move to raise rates could precipitate a sell-off in frontier- and emerging-market assets, which we got a taste of earlier this year when yields on US treasuries rose in response to expectations for higher inflation.

Egypt isn’t among the countries most vulnerable to a Fed-induced EM sell-off, according to HSBC, which earlier this year suggested that a Fed rate-hike will spell particular trouble for Brazil, Indonesia, Mexico and South Africa.

Another thing supportive of capital flows to Egypt: Egypt could be re-included in the JPMorgan EM bond index before the year is out, which could see another USD 1.4-2.2 bn enter the country’s local currency bond market. Egyptian bonds could also be cleared through the Belgium-based clearinghouse Euroclear between September and November this year, making it easier for foreign investors to invest in EGP bonds.

For now, prospects are still out there, say Bank of America strategists, who made handsome returns shorting the USD against Ghana’s GHS and Kazakhstan KZT in April.