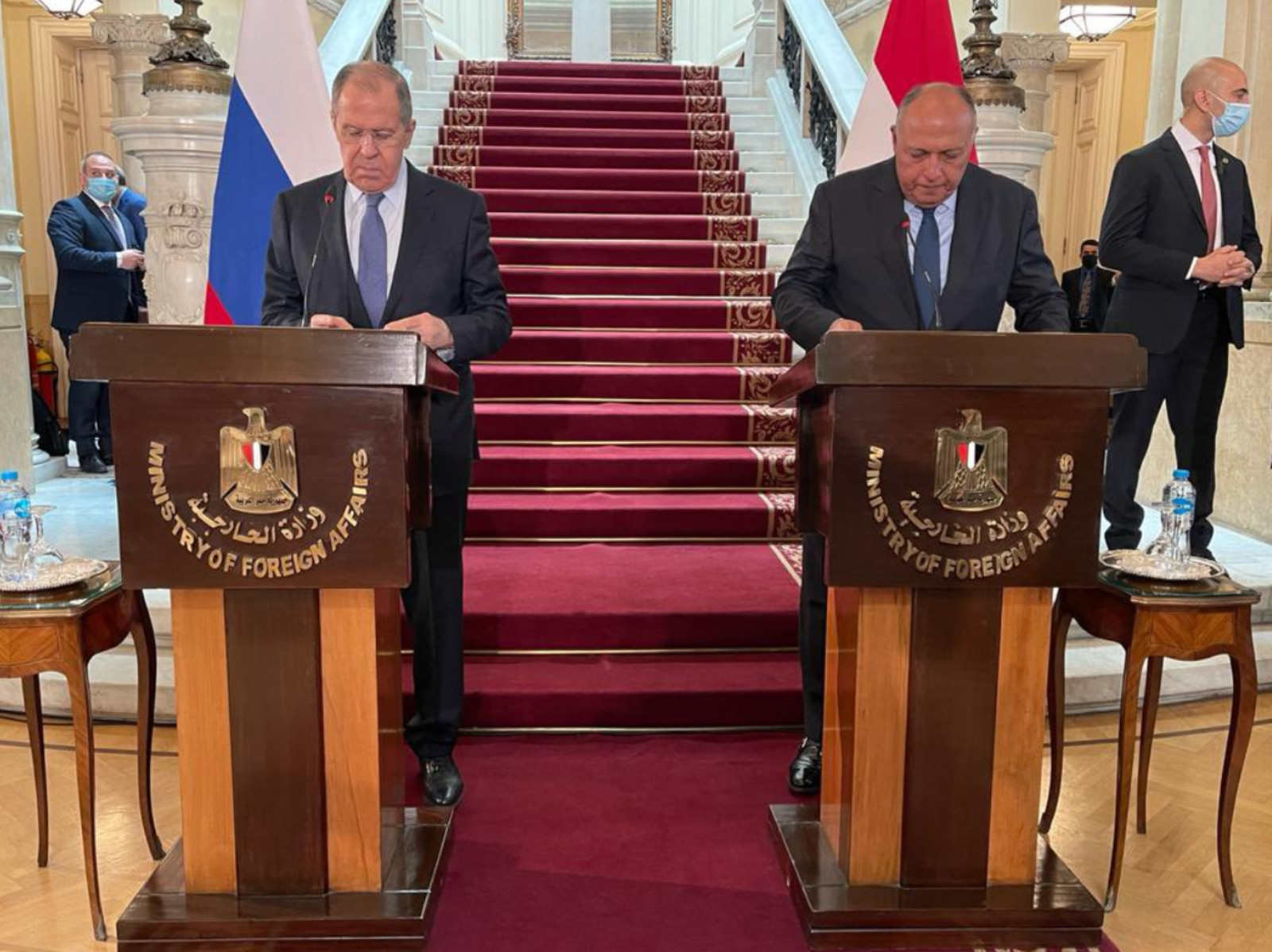 Egypt turns down Russia’s offer to intervene in GERD impasse: Foreign Minister Sameh Shoukry declined yesterday Russian Foreign Minister Sergey Lavrov’s suggestion that Moscow could step in as a mediator in the Grand Ethiopian Renaissance Dam (GERD) talks with Ethiopia and Sudan, Lavrov said during a press conference in Cairo yesterday (watch, runtime: 60:06). Shoukry thanked Lavrov, who was in town yesterday for talks with the foreign minister and President Abdel Fattah El Sisi, for backing Egypt’s position on wanting to reach a binding agreement on the dam’s operation and filling, but said that accepting the offer would be a “unilateral measure,” which Egypt does not condone.

That’s diplomacy-speak for “Ethiopia, take note”: Shoukry’s comment is directed at none other than Addis Ababa, which has insisted it will unilaterally move ahead with the second filling of GERD’s reservoir. Ethiopia has also rejected Egypt and Sudan’s proposal to bring in an international quartet to mediate the impasse, meaning Egypt accepting Lavrov’s intervention offer would also amount to a unilateral move.

Still, Egypt wouldn’t mind if Moscow gave Ethiopia a push in the right direction: “We also rely on Russia … to push parties to refrain from unilateral actions,” the minister said at the presser.

Moscow wants the three countries to reach an agreement “as soon as possible,” an Ittihadiya statement quoted Lavrov as saying in a meeting with El Sisi yesterday. The two discussed military and security matters, the statement said, without giving further details.

Ethiopia doesn’t seem in the mood to compromise right now, yesterday accusing Egypt of “failing to recognize Ethiopia’s generosity” and suggesting that there are ulterior motives behind Sudan’s rejection of the GERD.

You know what we would like, though? For Russian tourists to come back. The resumption of Russian flights to Red Sea resorts, which have been banned since the Metrojet crash in the Sinai in 2015, was supposed to be one of the main talking points for the FMs' meeting yesterday, according to Shoukry. However, the move was never discussed during talks, which rather focused heavily on the GERD impasse.

President Abdel Fattah El Sisi exchanged Ramadan greetings with Qatar Emir Tamim bin Hamad Al Thani in a call yesterday, according to an Ittihadiya statement. This comes after both countries formally agreed in January to re-establish diplomatic ties after a 3.5-year rift.

The president’s call with Al Thani was all over the airwaves last night. The Egyptian Center for Strategic Studies’ Khaled Okasha told Kelma Akhira’s Lamees El Hadidi that the call is “a positive indicator” for restoring relations between both countries (watch, runtime 5:44). Ala Mas’ouleety (watch, runtime 5:39), Al Hayah Al Youm (watch, runtime 5:51) and Masaa DMC (watch, runtime 4:09) also had coverage.

It seems that the new Libyan government wants to keep its arrangement with Turkey in the EastMed — and that could spell trouble with Egypt. Libya’s interim government is committed to the maritime agreement signed with Turkey in 2019, Turkish President Recep Tayyip Erdogan said yesterday following talks with Libya’s interim prime minister, Abdulhamid Dbeibeh. “The maritime accord signed between Turkey and Libya secures national interests and future of both countries … We confirmed our determination on this issue today,” Erdogan said at a press conference.

The Great Gas Game: Turkey and the Libyan government’s predecessor — the Tripoli-based Government of National Accord — staked a claim in the Eastern Mediterranean in 2019 by announcing a shared economic zone that would give the countries exclusive access to the territory — and its hydrocarbon reserves. The zone conflicts with a rival economic area delineated by Egypt and Greece.