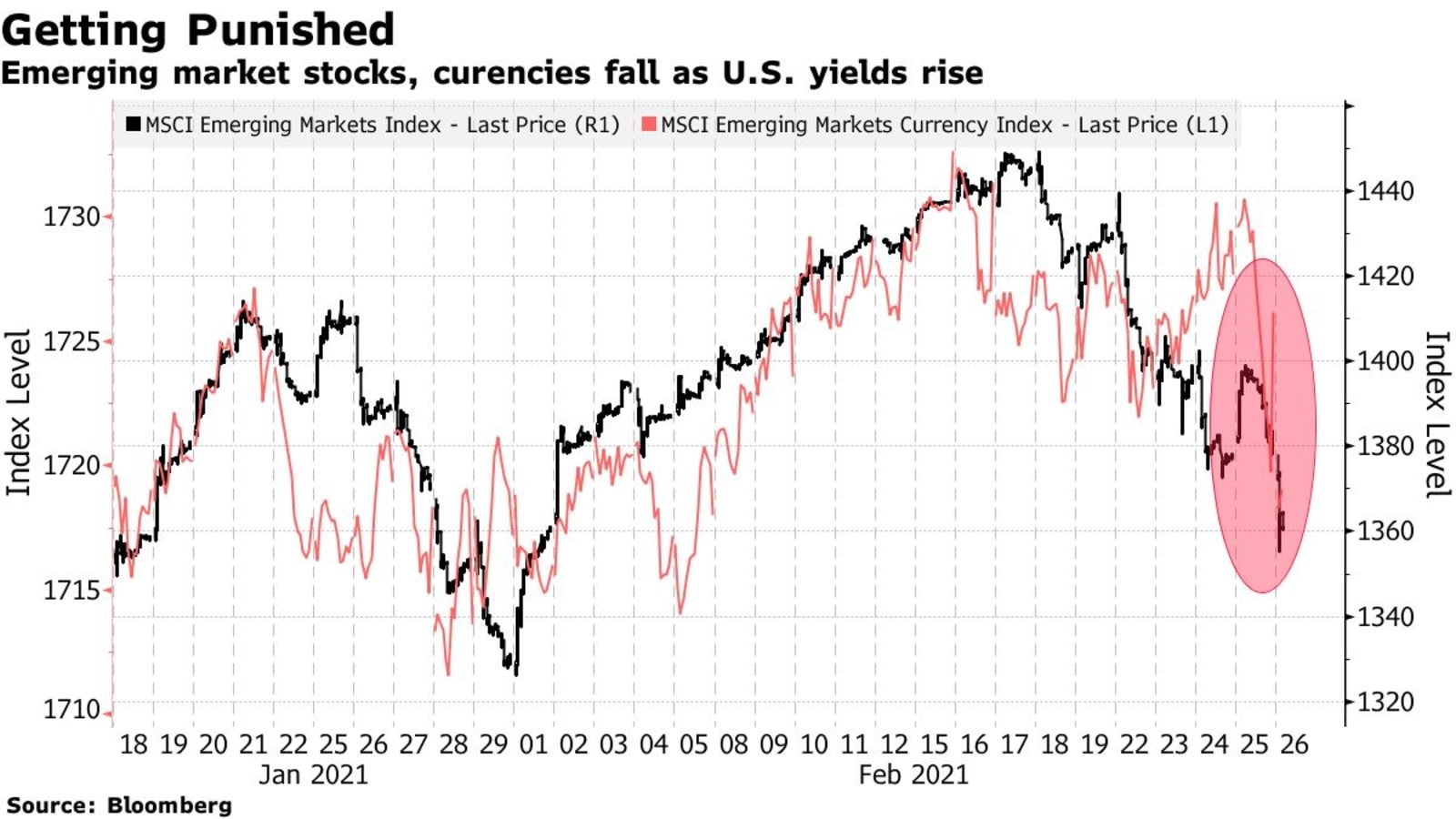 Emerging market assets took a hit toward the end of February, with the MSCI gauge of shares falling 3% on Friday and major currencies including the ZAR and the MXN tumbling during the final few days, according to Bloomberg. This came following a sharp sell-off in the US bond market, prompting analysts to fear that the subsequent surge in treasury yields, which hit their highest level in nearly a year, could trigger a flight from equities and risk assets. The rise in yields to many was also a signal that fears of stimulus-fuelled inflation in the developed world are growing, and that the Fed could move to tighten monetary policy sooner than expected.

Hero to zero: All of this means that risky EM assets are looking less attractive to investors, who had crowned the asset class among 2020’s most popular trades and sent EM stocks to record highs at the start of 2021. A Bank of America survey in January found that two-thirds of investors expect EM stocks to be the top performers this year.

Egypt remains unscathed: The EGX fell only 0.8% in the first session after the US sell-off, yields on EGP-bonds remained flat, and the EGP fell only marginally on Sunday.

2021 could be aping 2013: Some analysts are saying the conditions are eerily similar to the so-called “taper tantrum” in 2013, when the Fed began to roll back its crisis-era bond-buying program, pushing down on bond prices and pushing yields higher. This triggered an exodus from EMs for fear of what rising rates in the US and a stronger greenback would mean for emerging economies. “It appears the market is pricing in a taper tantrum whatever the Fed says,” said Alvin T. Tan, head of Asia FX strategy at RBC Capital Markets. “Like in 2013, it is generally negative for EM FX.”

Yet, there are some that argue otherwise, saying that the general trend of a recovering global economy will help more than hurt EMs and offset the risk of higher interest rates, says the Financial Times. This will vary from country to country, with those better able to attract “productive investment,” rather than more passive portfolio inflows, likely to come out in good shape, notes the salmon-colored paper.

Keep an eye on FDI: The silver lining for EMs would be if foreign direct investment (FDI) recovers as we head into 2021. Inflows plummeted in the year of the pandemic everywhere save for a few Asian economies, with China and India posting y-o-y growth, according to a recent FT analysis. EMs in Africa and Latin America, by sharp contrast, saw large drops in many key components of FDI. M&As, project finance, and job-creating greenfield investment dropped the most in both regions compared to anywhere else.

Strong FDI performance in Asia is perhaps why, overall, EMs were shown to have fared better than their developed counterparts. The United Nations Conference on Trade and Development’s (UNCTAD) most recent Investment Trends Monitor (pdf) showed that while global FDI flows dropped by some USD 640 bn (42%) in 2020, FDI into EMs was only down 12%, and the share of EMs in global FDI reached a record high of 72%.

Where does Egypt stand: Though Egypt retained its status as Africa's top FDI destination in 2020, inflows fell 32% to USD 5.5 bn last year. Egypt’s FDI levels remain low by international standards, and the non-productive oil and gas sector accounts for the bulk of inflows.