Good morning, friends, and welcome to the start of a new workweek. We’re a day away from a new month, but really we’re still emotionally processing last March.

THE BIG STORY HERE AT HOME is the Health Ministry opening the door for the elderly and those with chronic illnesses to register for covid-19 vaccines. Expect this to be the topic du jour for at least another day or two. We have more details in this morning’s Covid Watch, below.

THE BIG STORIES INTERNATIONALLY are all coming out of Washington but pertain to the Middle East, including the release of a report that says Saudi Crown Prince Mohammed bin Salman approved journalist Jamal Khashoggi’s brutal murder in 2018. Also making headlines is US President Joe Biden’s first airstrike in the region. We have more on both in Around the World, below.

*** CATCH UP QUICK (and refresh your memory if you woke up with weekend amnesia). The big stories from Thursday’s EnterprisePM:

Mid-term exams are under way at public schools and universities, as per the timeline laid out by Education Minister Tarek Shawki and Higher Education Minister Khaled Abdel Ghaffar earlier this month. The exams are being held with strict precautionary measures — including wearing face masks and greater physical distancing — to contain the spread of covid-19, the Higher Education Ministry said in a statement. Public schools and universities got an extra week tacked onto their mid-year holiday last week, with their second term starting today instead of 21 February. We have more on the first day of exams in Last Night’s Talk Shows, below.

Egypt’s women empowerment plan is now officially in execution phase: Backing women’s representation and leadership in the corporate world, promoting career-family balance and encourage private investment in elder and child care, and offering training programs in sectors in which women are underrepresented are among the three-year goals for the Closing the Gender Gap Accelerator program, cabinet said in a statement. The program was launched last July by the International Cooperation Ministry, the National Council for Women (NCW), and the World Economic Forum. The ministry has all you need to know about the program here.

Meanwhile, the “Decent Life” initiative is now among the UN’s registry of programs that promote sustainable development. The initiative, which was rolled out at the beginning of 2019 to improve living conditions for the country’s most needy, was admitted into the Partnership for SDGs platform as a way to highlight its positive impact on rural communities, Planning and Economic Development Minister Hala El Said said.

US President Joe Biden’s USD 1.9 tn stimulus bill is one step closer to fruition after it passed in a near party-line vote at the House yesterday morning. Dubbed the “American Rescue Plan,” the bill is designed to stabilize the economy and includes USD 1,400 direct stimulus checks, an extension of federal top-ups of USD 400 per week to unemployment ins. through the end of August, USD 350 bn for state and local governments, USD 50 bn for covid-19 testing and tracing, and USD 130 bn for K-12 schools, in addition to a major expansion of the child tax credit, CNN reported.

The bill is now on its way to the Senate for a vote, where it will likely meet more resistance than it did at the House, even with Biden urging lawmakers to fast-track passing the package. Pundits widely expect the Senate to strike down a USD 15 / hour minimum wage increase from the current USD 7.25 / hour. 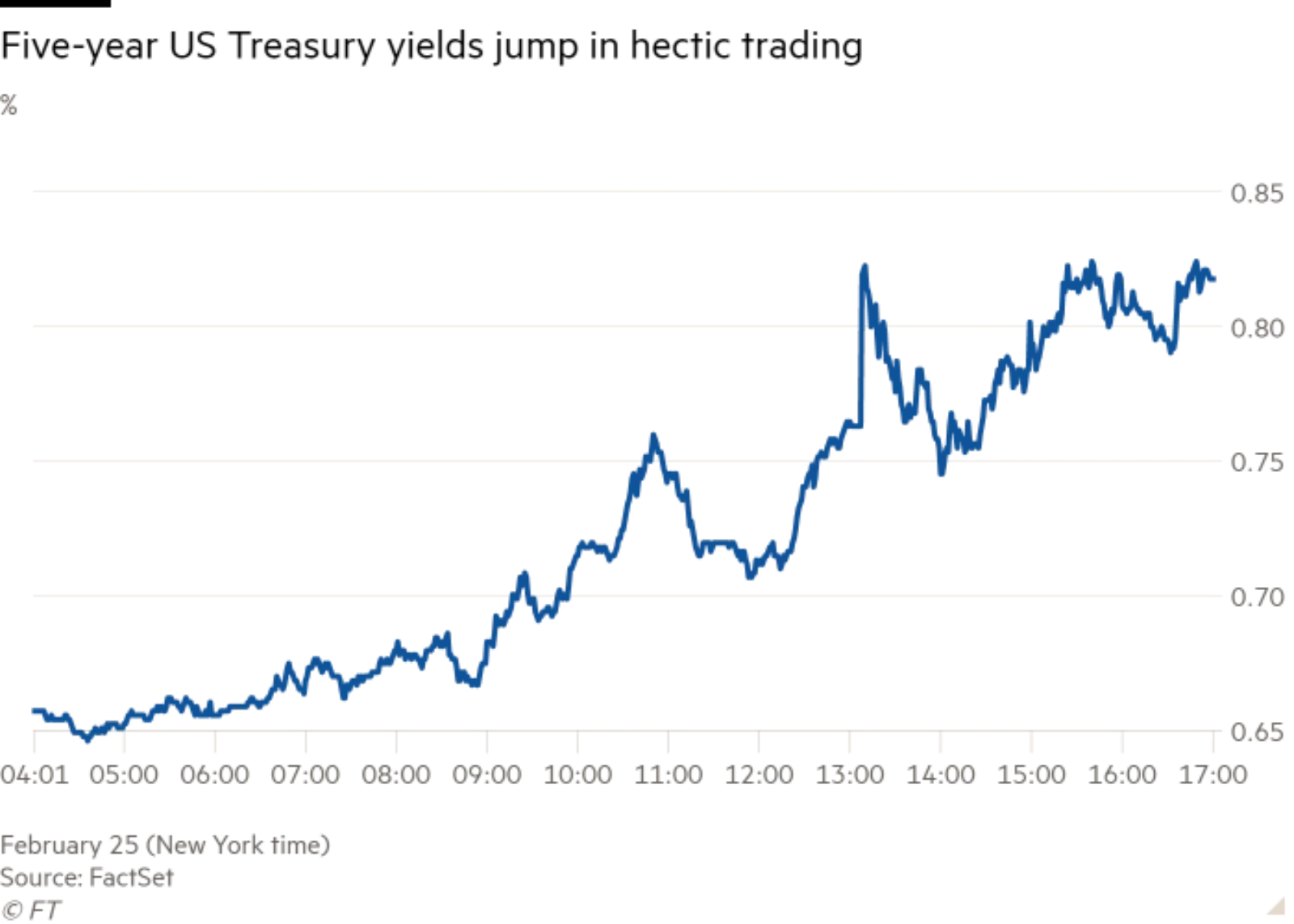 Jitters in the US bond market evolved into a tantrum on Thursday as investors anxious about incoming inflation dumped treasuries. Bond yields spiked to their highest levels in almost a year, triggering an equity sell-off which saw tech stocks have their worst day since October. Rates on 10-year bonds surged as high as 1.61%, caused by an “extraordinarily weak” auction of seven-year notes. “It was big … It was almost as if a dam broke,” analysts at Rabobank wrote.

What’s happening here? The jitters began as the Biden administration was readying the USD 1.9 tn stimulus bill, and with the Fed continuing to buy bns of USD of treasuries every month, investors are growing increasingly fearful that a pickup in inflation will eat into their returns and are dumping bonds. Not only this, but traders — with one eye on the run of positive economic data — are beginning to price in rate hikes further down the line, an idea that the European Central Bank is already moving to quash. Analysts are now concerned that rising yields will start to dim the attractiveness of the stock market, triggering flight from equities into bonds.

It’s not great news for emerging markets: Rising rates in the US typically suck capital out of emerging economies and strengthen the greenback, leaving developing nations with weaker currencies and hurting the finances of countries holding a lot of USD-denominated debt. This was seen on Thursday when a basket of EM currencies saw its worst day since the covid crash last March.

But on the upside, EMs are still attractive enough to eurobond investors thanks to negative yields in Europe, with the latest case in point being Saudi Arabia, which sold EUR 1.5 bn of eurobonds at a negative rate, according to a Saudi Finance Ministry statement. The sale was c.3x oversubscribed and yields stood at -0.057% for EUR 1 bn of three-year notes and 0.646% for EUR 500 mn nine-year notes. The strong appetite comes as recovering oil prices improve prospects for the world’s largest exporter.

Egypt is already setting the tone for eurobonds in the region, with the issuance of USD 3.75 bn of eurobonds in a sale that was c. 4x oversubscribed earlier this month.

Want the A-Z of what happened? Read John Authers’ piece in Bloomberg: Bond Tantrum Is a Big Test of Central Banks' Mettle.

Tomorrow is a brand new month — and you know what that means:

Chairman and managing director of Misr Ins. Holding Co. Basel El Hini will deliver a speech at a breakfast hosted by the French Chamber of Commerce in Egypt, which will take place at the French ambassador’s residence tomorrow at 8:30am.