The Year Ahead, according to EFG 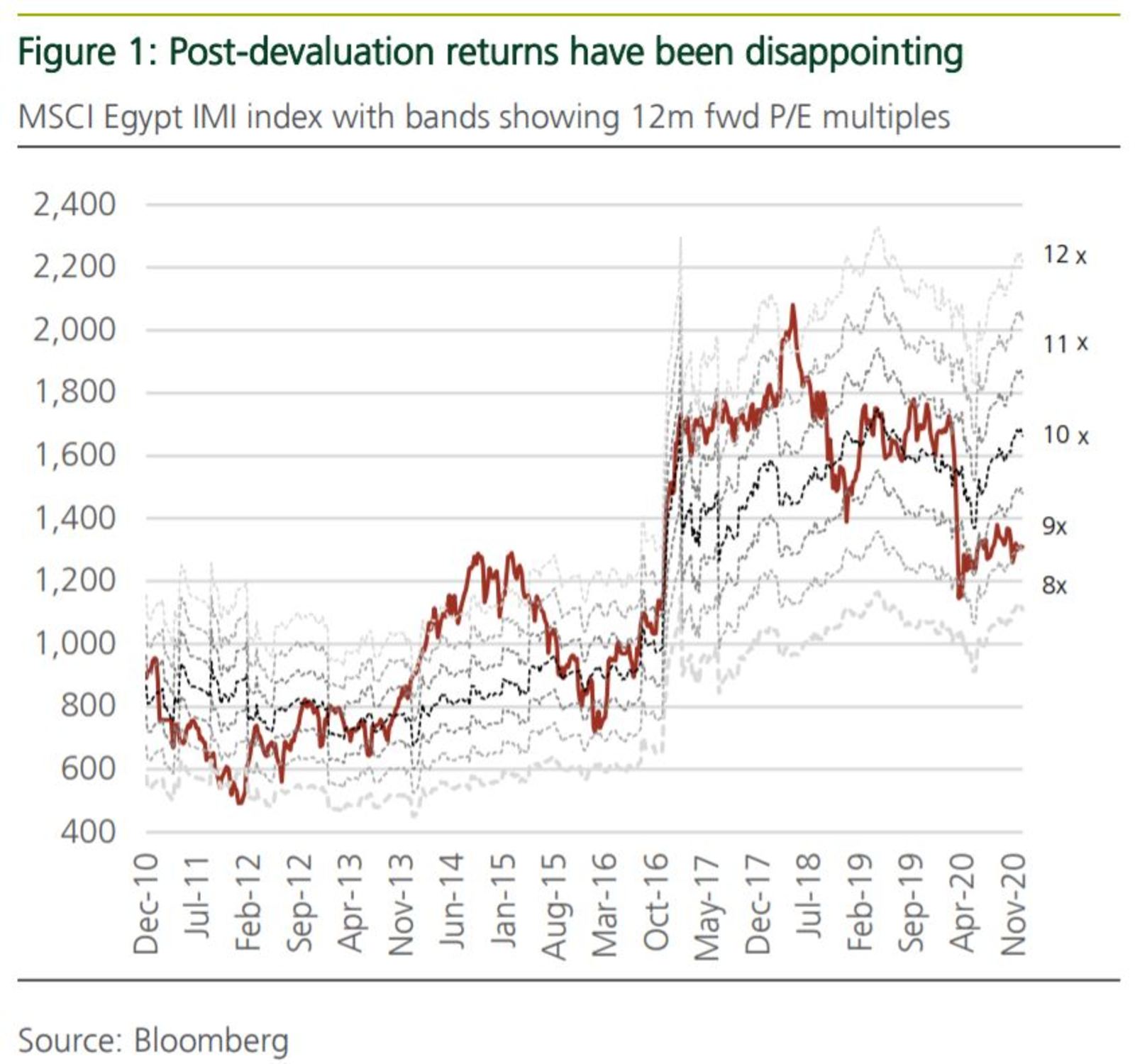 Egyptian equities are inexpensive and under-owned — and the economy needs more policy momentum. Those are EFG Hermes’ takeaways (in a nutshell) on Egypt’s macro profile in its annual Year Ahead report. While the IMF-backed reform program made the economy “far more resilient than it was five years ago” and helped cushion the blow of covid-19, stimulus is much needed, the region’s leading investment bank said.

The right type of stimulus: This includes “a mix of macro and microeconomic policies that would act as a catalyst for growth,” such as making doing business easier, setting incentives for productivity, and “pressing ahead with privatization.”

EFG is overweight on Egypt, saying that “a market sell-off combined with the Central Bank of Egypt’s rate cuts meant that stocks began to look very [affordable], with the earnings yield rising above the riskfree yield for the first time since the 2016 devaluation.” Egyptian bellwether CIB is at its lowest valuation multiple in years, EFG notes, and “other stocks are also inexpensive” and so could benefit if “further cuts in real rates increase local liquidity.”

Retail investors are driving trading right now, as they are in KSA, with the average daily value traded by day traders more than doubling to c. USD 61 mn in 2H2020 compared to the first half of the year.

Foreign investor interest a double-edged sword — for the moment: The firm notes that while Egyptian equities benefit from interest on the part of active investors, that means we could see selling pressure EM fund managers themselves face redemptions.

Disappointing EGX returns: The EGX’s annualized growth rate, in EGP, was only 8.4% over the past four years as the stock market, as a whole, delivered “disappointing returns” since the November 2016 currency float. This is the case because institutional investors are getting more from fixed income as the real interest rate in Egypt is among the highest in the world (and this is why Egypt remains a carry trade darling).

A shift in market dynamics: Local behaviour changed since the March lockdown. The pandemic-induced sell-off, combined with aggressive policy action by the CBE, brought stock valuations to attractive levels. This guided the earnings yield (earnings per share over a 12-month period) to its highest level since 2016 and led to a sharp increase in retail trading. Retail average daily trading volumes more than doubled to USD 61 mn in 2H2020 from 1H2020. Retail interest was heavily geared toward small-cap stocks. Those stocks, tracked by the MSCI Egypt Small Cap Index, delivered a return of 52.8% from the March bottom. The rising popularity of retail investing was a common theme in many markets throughout the pandemic.

Another challenge is limited room for monetary policy expansion, an issue “depriving the economy from a strong push after sharp contractionary policies during the reform years,” EFG noted. The Central Bank of Egypt (CBE) already used a big part of its policy firepower in 2020, enacting a total of 400 basis point rate cuts between March and November to fight back against the pandemic. It kept the interest rate on hold in its most recent meeting, citing “subdued” economic activity from the second wave of covid and efforts to contain it.

Charting growth: EFG expects the ongoing recovery to continue as it sees no “major restrictive measures” that could take a further toll on economic activity.

GDP growth could come in at 5% in FY2021-2022 (close to pre-pandemic levels). The investment bank expects growth to close the ongoing fiscal year at 3.2%, and estimates the figure clocked in at 3.3% last fiscal year.

What will drive the rebound? The “more stable sectors” including construction, agriculture and public services, as well as hydrocarbons.

What’s likely to remain under pressure: EFG is “less reassured about the much-awaited consumption recovery,” which it says has been weak in past years following the EGP float. This was exacerbated by the pandemic, putting pressure on an “already-struggling” area.

Other key points on Egypt: