Good morning ladies and gents, and welcome to November — we hope you’re buckled up for what is shaping up to be one of the biggest weeks of an already too-eventful year. It’s something of a perfect storm for investors as the most uncertain US presidential race in a generation runs headlong into new lockdowns in Europe and surging covid cases in the United States, setting up what could be a volatile week in markets.

Here’s what you need to know:

#1- Lockdowns are back in full force as covid runs amok in Europe, the US and Canada. The US yesterday set a new world record for the most fresh covid-19 cases reported in a single day after a Reuters tally found that there had been 100k new infections on Saturday alone. Daily figures in Europe are well above anything seen during the first wave and continue to rise. In response, France, Germany, Belgium and Austria have all since Thursday announced new lockdowns, joining Spain and Italy which earlier last week significantly tightened restrictions. The UK is the latest to follow suit, with PM Boris Johnson announcing overnight that restaurants and bars will close for four weeks, as well gyms and “non-essential” shops. The UK will also require people to stay home except for work, school and exercise.

#2- All of this is happening as economic support falters in the US and UK: The failure of bipartisan talks to agree a new stimulus package before the election now means that new fiscal support will not be forthcoming until at least the end of January when the next president is sworn into office. Over in the UK, the new national lockdown is taking place just as the government’s mortgage payment holiday and furlough scheme come to an end.

#3- The small matter of the US election. US citizens will go to the polls on Tuesday — or at least those who haven’t already voted — to cast their ballots in what is expected to be the most turbulent election in years. If you’d have asked us a month ago, we’d have probably told you that Biden was a shoo-in for the presidency. Not anymore. Trump has trimmed Biden’s huge lead in the national polls, and in the battleground states of Florida and Pennsylvania — states so significant they could determine who wins the presidency — the race is too close to call.

Be ready to wake up Wednesday morning and not know who won the election: The risk of a more drawn-out and altogether more toxic re-run of the 2000 election is significant, pundits say.

The party already got started at the tailend of last week as investors freaked out over the resurgence of covid, delivering US and European stocks one of their worst weeks since the panic in March. We have all the details below.

We’ll know later today the results of round one of elections to the House of Representatives, the National Elections Authority said on Thursday. The next round of elections for Egyptians abroad runs from Wednesday to Friday, while voting here at home kicks off next Saturday, 7 November and wraps on Sunday, according to the NEA’s breakdown of the election timeline (pdf). Voters in Cairo, Qalyubia, Menofia, Gharbia, Kafr El Sheikh, Sharqia, Damietta, Port Said, Ismailia, Suez, North Sinai and South Sinai will all be voting in the second phase of the election.

Egypt, Ethiopia and Sudan are back at the negotiating table today to discuss the filling and operation of the Grand Ethiopian Renaissance Dam, Sudan’s Irrigation Ministry said in a statement on Saturday. The meeting was agreed upon during the last joint meeting of the countries’ foreign and water ministers on 27 October, the first meeting of African Union-brokered negotiations following a seven-week hiatus. Cairo and Khartoum are standing firm that the talks must produce a legally binding agreement.

On the agenda in the House today: MPs will discuss draft amendments to the Unified Tax Act that would impose harsher penalties for tax evasion (more on this in this morning’s Speed Round, below) and the renewal of the three-month state of emergency in its plenary session today.

The bylaws governing the Senate will be published within the next two weeks, Speaker Bahaa Eldeen Abou Shoka has said, Al Shorouk reports.

News triggers coming up in the next two weeks as we begin a new month:

PSA- Clocks just fell back an hour in much of Canada and the United States, giving our readers across the pond an extra hour’s sleep today. Egypt did away with the twice-yearly time change after a year in which we changed the clocks four times. New York and Toronto will be seven hours behind CLT today.

The Health Ministry reported 170 new covid-19 infections yesterday, down from 176 the day before. Egypt has now disclosed a total of 107,555 confirmed cases of covid-19. The ministry also reported 8 new deaths, bringing the country’s total death toll to 6,266. We now have a total of 99,452 confirmed cases that have fully recovered.

Churches will reduce the size of masses and other religious and educational events to 25% of maximum capacity starting today, Masrawy reports, citing a statement by the Coptic Orthodox Church.

African governments need to step up their covid restrictions ahead of a potential second wave, the Africa Centres for Disease Control and Prevention warned on Thursday as cases accelerate across parts of the continent, Reuters reports. In the past month, cases have spiked by an average 45% per week in Kenya, 19% in the Democratic Republic of Congo and by 8% in Egypt, according to the organization’s figures.

The number of flights operated by EgyptAir over the past three months was down 75% on the equivalent period last year, even as countries began re-opening their borders and reestablishing flight routes, the carrier’s media advisor Asma Al Saadi told Al Shorouk.

Confederation of African Football President Ahmad Ahmad tested positive for covid-19 on Friday and is self-isolating at a Cairo hotel, CAF said on Friday. Ahmad was in Morocco earlier in the week for the Confederation Cup and began experiencing “mild flu symptoms” after returning to CAF’s headquarters in the Egyptian capital on Wednesday.

Iran is imposing strict measures to curb a third wave of the virus, prohibiting weddings, wakes and conferences and extending the closure of businesses for another week, Reuters reports. 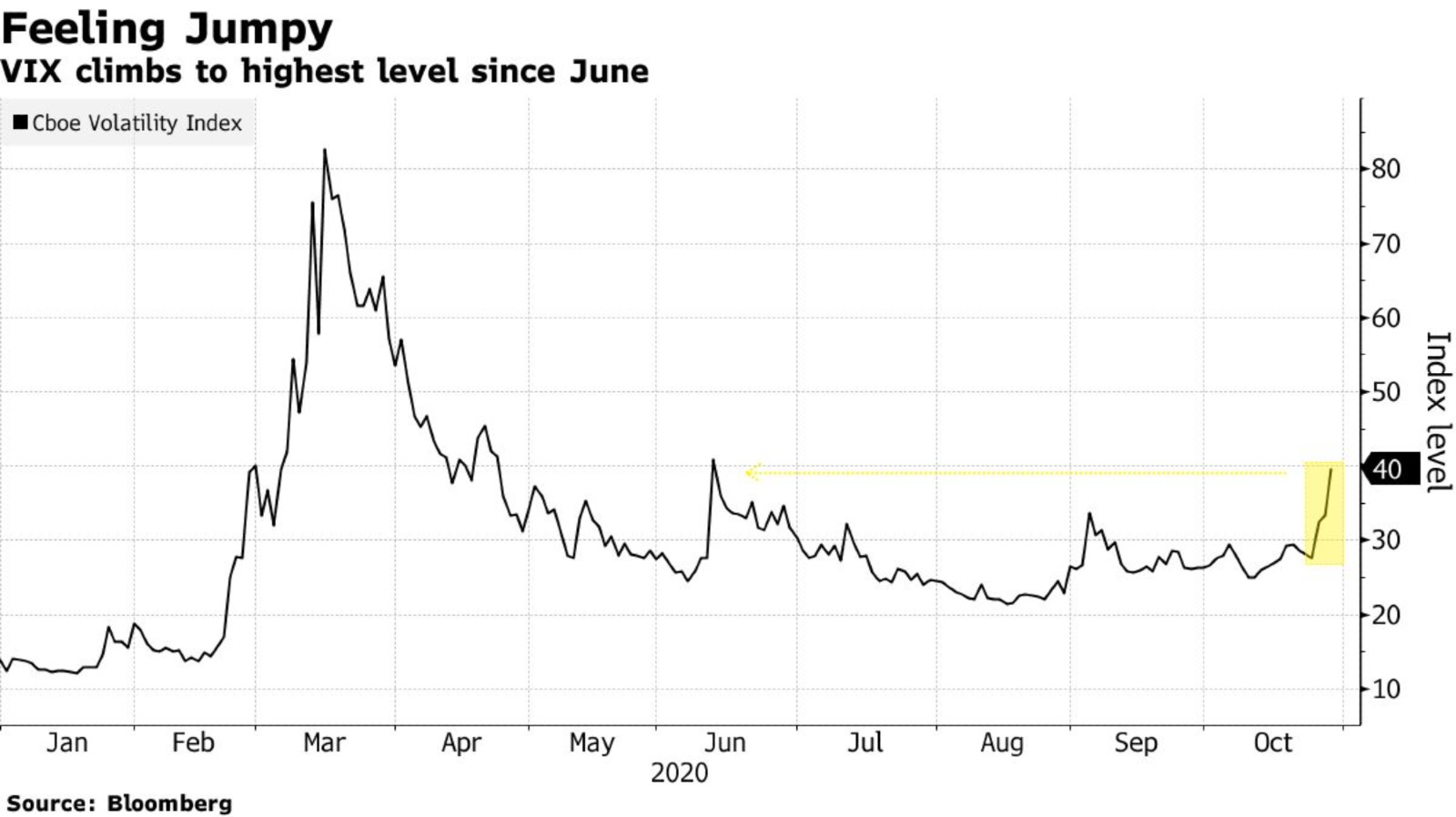 Global equities had their worst week since March as the upcoming US election and renewed covid-19 lockdown measures across Europe shook an already jittery market, the Financial Times reports. The MSCI All Country World Index fell by 5.2% over the week, while the S&P 500 lost 5.6%.

Bumper tech earnings weren’t enough to save the Nasdaq: The tech-heavy index fell 2.4% on Friday despite Alphabet, Amazon, Apple and Facebook all outperforming analysts earnings expectations in 3Q, leaving it down 5.5% for the week.

The fear index hit a four-month high: The VIX — an index that measures volatility in US equity markets — rose above 40 for the first time since June in response to the selloff.

The news of renewed lockdowns wasn’t kind to oil prices, which fell to their lowest level since early June on Thursday. Brent crude dropped 3.8% to USD 37.65/bbl on Thursday while US crude slid 3.3% to USD 36.17/bbl on concerns that the new lockdowns will precipitate another major demand slump.

All of this came despite the US and Europe reporting record quarterly growth figures: Output in the eurozone jumped 12.7% in 3Q2020 (pdf) — the fastest rate of economic expansion since records began in 1995 — while the US economy grew at a record 33.1% annualized clip during the quarter.

FINTECH WATCH- Ant Group’s blockbuster IPO drew around USD 3 tn of bids from retail investors — equivalent to the UK’s GDP — putting the sale on track to raise USD 37 bn and valuing the company at around USD 316 bn. The Chinese payments group’s dual IPO saw the Shanghai portion 872x oversubscribed, drawing in USD 2.8 tn of bids, while the Hong Kong tranche won orders for USD 168 bn worth of stock. The listing has eclipsed Saudi Aramco’s as the world’s largest IPO. The Financial Times and Reuters had the story.

And IPOs in the US are still going strong despite the uncertainty: Five companies listed on the US stock market last week, all of which priced at or above the estimated pricing range, Axios says. Chinese lender Lufax raised USD 2.4 bn on Thursday to become the second-largest IPO in the US this year.

The latest from the US-China tech war: Chip companies are no longer facing US sanctions for supplying Huawei with components, as long as they are not used for the Chinese company’s 5G business, the Financial Times reported, citing people briefed by Washington. Analysts believe that while sanctions will still negatively impact Huawei’s 5G operations, the US is willing to allow the company’s smartphone business to recover as it poses less of a security threat. Meanwhile, the Trump administration’s ban on TikTok has been blocked by a US federal judge issuing a temporary injunction, saying it would cause “irreparable harm” to the TikTok users who depended on the app to make a living, according to Bloomberg. 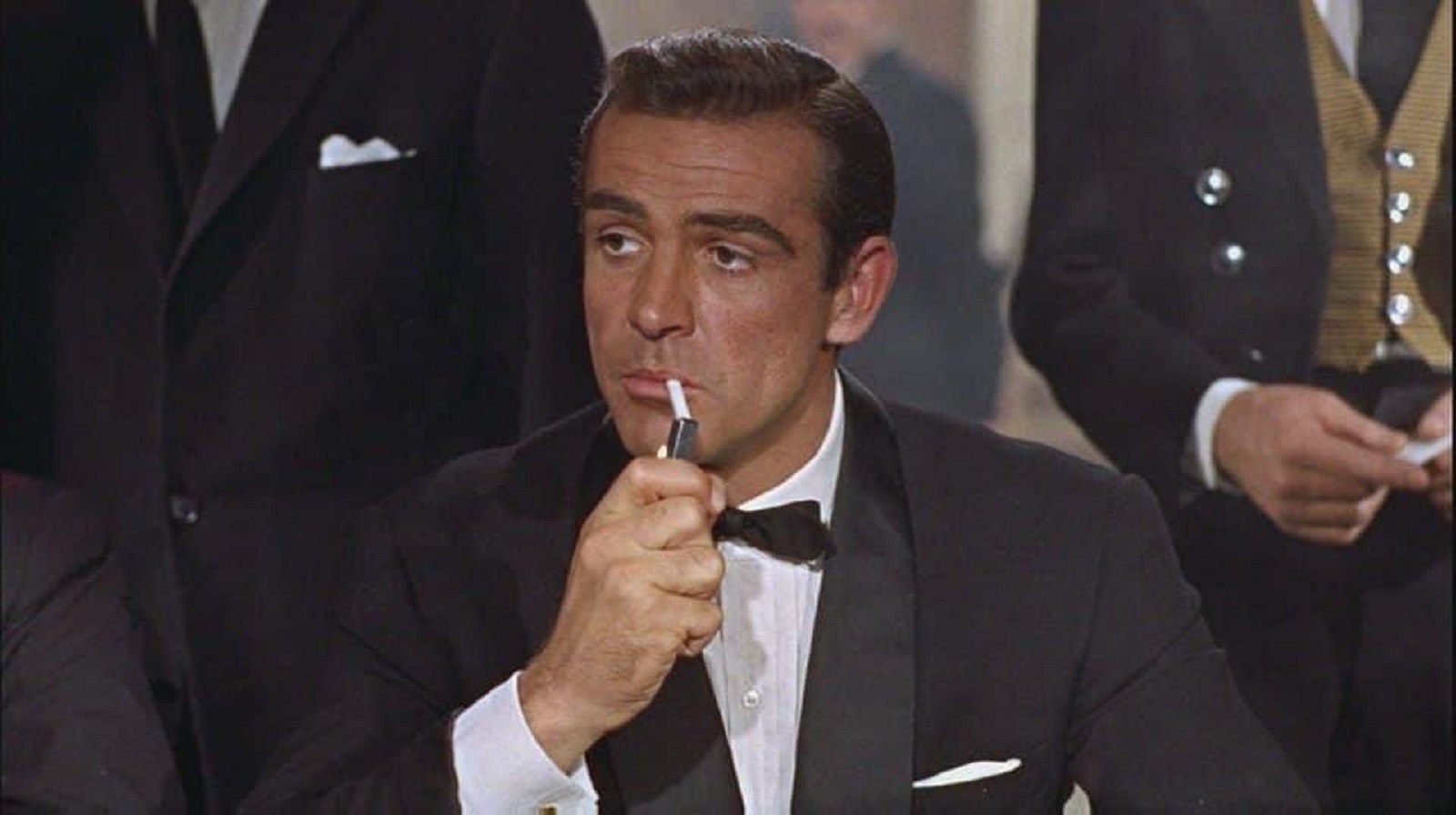 The original James Bond, actor Sean Connery, has passed away at the age of 90, the Associated Press reports. Best known for his Bond and Indiana Jones franchises, Connery won an Academy Award in 1987 as a Chicago cop who helped Elliot Ness’ team bring down gangster Al Capone, in Brian de Palma’s “The Untouchables.” Bond producers Michael G. Wilson and Barbara Broccoli said they were “devastated” while Scottish First Minister Nicola Sturgeon said the country was mourning “one of her best loved sons.”

Renowned women’s advocate and former head of the National Council for Women Farkhonda Hassan passed away on Friday at the age of 90, the council said in a statement. Hassan served as a member of parliament from 1979 to 1984, was a member of the Shura Council, and taught geology for more than five decades at the American University in Cairo. 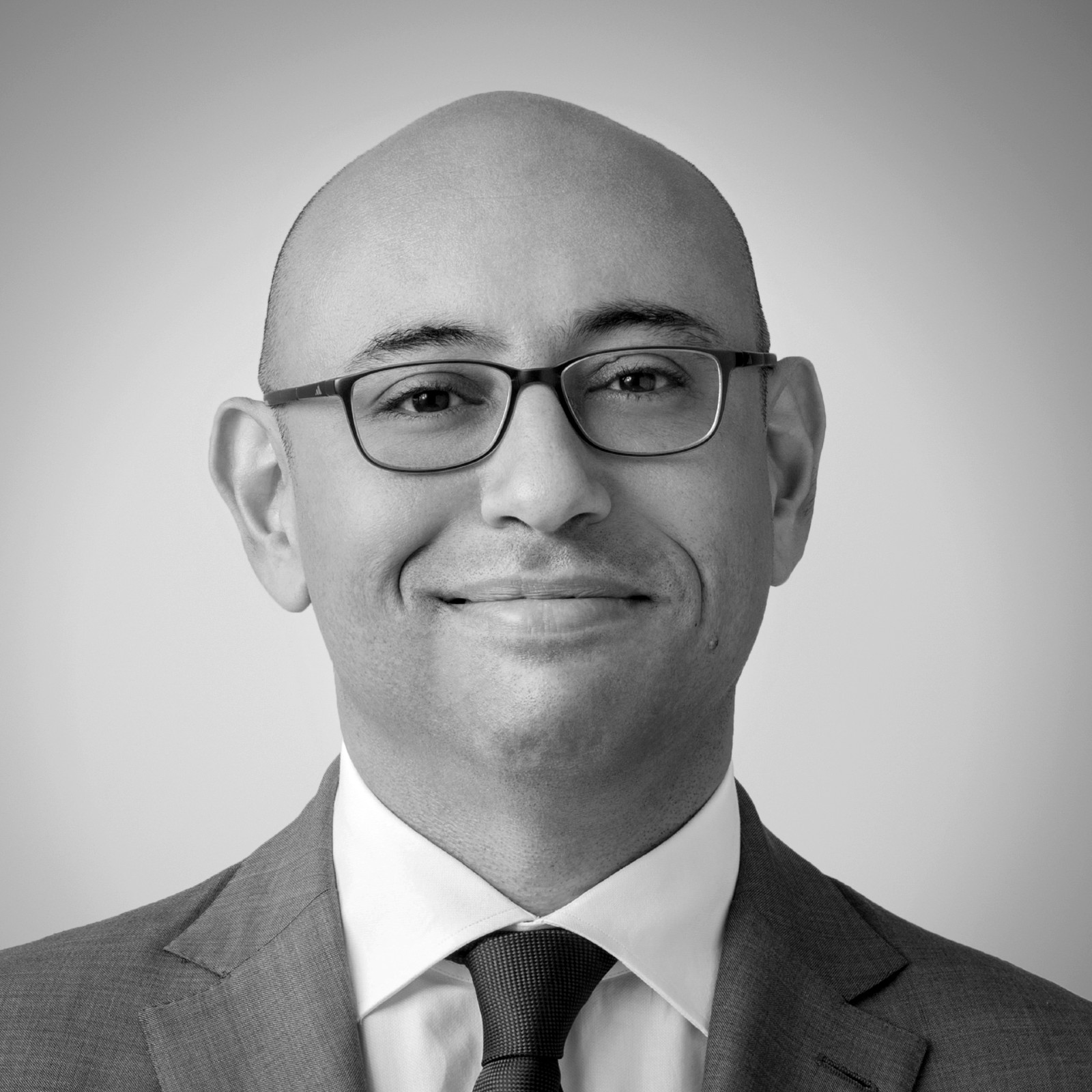 In the age of online commerce, retail has to be an experience for its customers, Majid Al Futtaim Properties CEO Ahmed Galal Ismail told us in our latest episode of Making It. We discuss the role of malls and their impact on communities, as well as the company’s future investment plans in the country. Majid Al Futtaim have invested over EGP 40 bn in Egypt since launching operations in 2002.

Tap or click here to listen to the episode on our website | Apple Podcasts | Google Podcasts | Anghami | Omny. We’re also available on Spotify, but only for non-MENA accounts. Subscribe to Making It on your podcatcher of choice here.