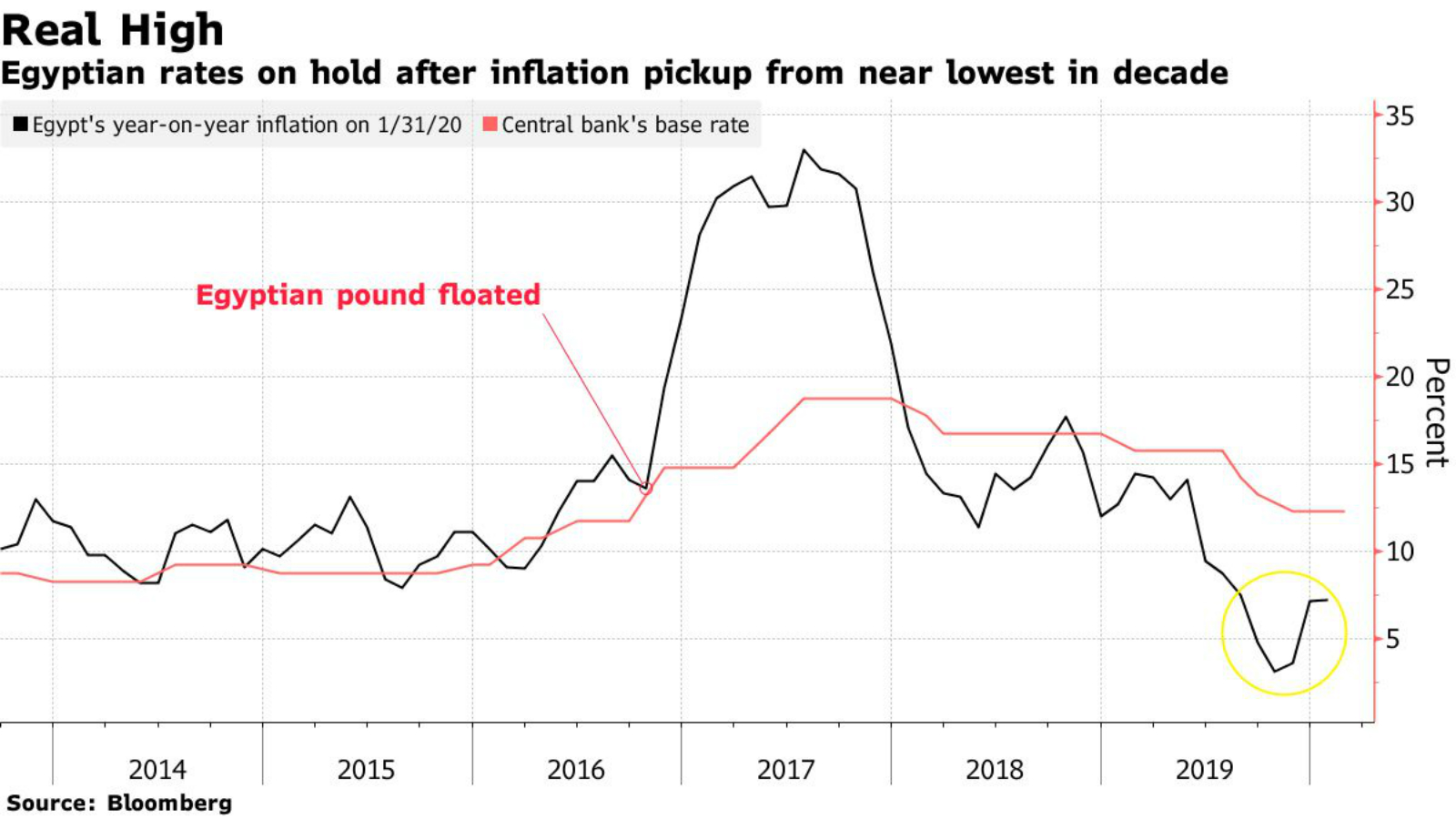 Uptick in inflation a key factor in the CBE’s decision: The CBE “will not hesitate to resume its easing cycle subject to further moderation of inflationary pressures,” the bank said in its statement, hinting that last month’s inflation figures may have been the deciding factor in its decision to leave rates on hold. Inflation rose for the third consecutive month in January, ticking up slightly by 0.1 percentage points to 7.2%. This remains within the central bank’s 9% (+/- 3%) target range.

The central bank has one eye on the covid-19: The CBE cited “disruptions to global economic activity following the recent coronavirus outbreak” as a reason for caution over its interest rate policy. It also noted the persistent slump in oil demand.

Where rates stand now: The CBE’s overnight deposit rate remains at 12.25% and its lending rate is at 13.25%. The main operation and discount rates are 12.75%. The central bank had lowered interest rates four times over the course of 2019, delivering a total 450 bps in cuts between February and November.

Ahead of the meeting, analysts were split on whether the CBE will resume its easing cycle. Five out of 12 economists we polled expected the CBE to keep rates unchanged while six of our polled analysts projected a 50-100 bps cut.

CBE to pause easing cycle for a little longer: The CBE’s decision to keep the rates unchanged suggests that policymakers are more concerned by the recent uptick in inflation than previously thought, Jason Tuvey, senior EM economist at Capital Economics wrote in a note. The research house maintains that the central bank will cut by another 225 bps by the end of the year but now says that all of these will occur in the second half of the year.

Differing views on the EGP: The CBE left rates unchanged to maintain the appreciation of the EGP against the USD to curb inflation and avoid any possible inflationary hikes, Sigma Capital’s Abou Bakr Emam told Enterprise. Capital Economics’ Tuvey wrote, meanwhile, that “the CBE may want to push back against the appreciation of the EGP … This has dented external competitiveness and is fuelling a deterioration in the underlying current account position.”

Awaiting the Fed’s next move: The central bank appears to be looking to the next Federal Reserve meeting to form a clearer view of the global economic landscape, Radwa El Swaify, head of research at Pharos Holding, told Enterprise. “We expect a 100 bps cut in the coming meeting if global developments stabilize,” she added, highlighting risks for emerging markets as a result of the covid-19 outbreak.

A previous version of this article incorrectly stated that the yield on 6-month t-bills fell 300 bps in an auction last Thursday.