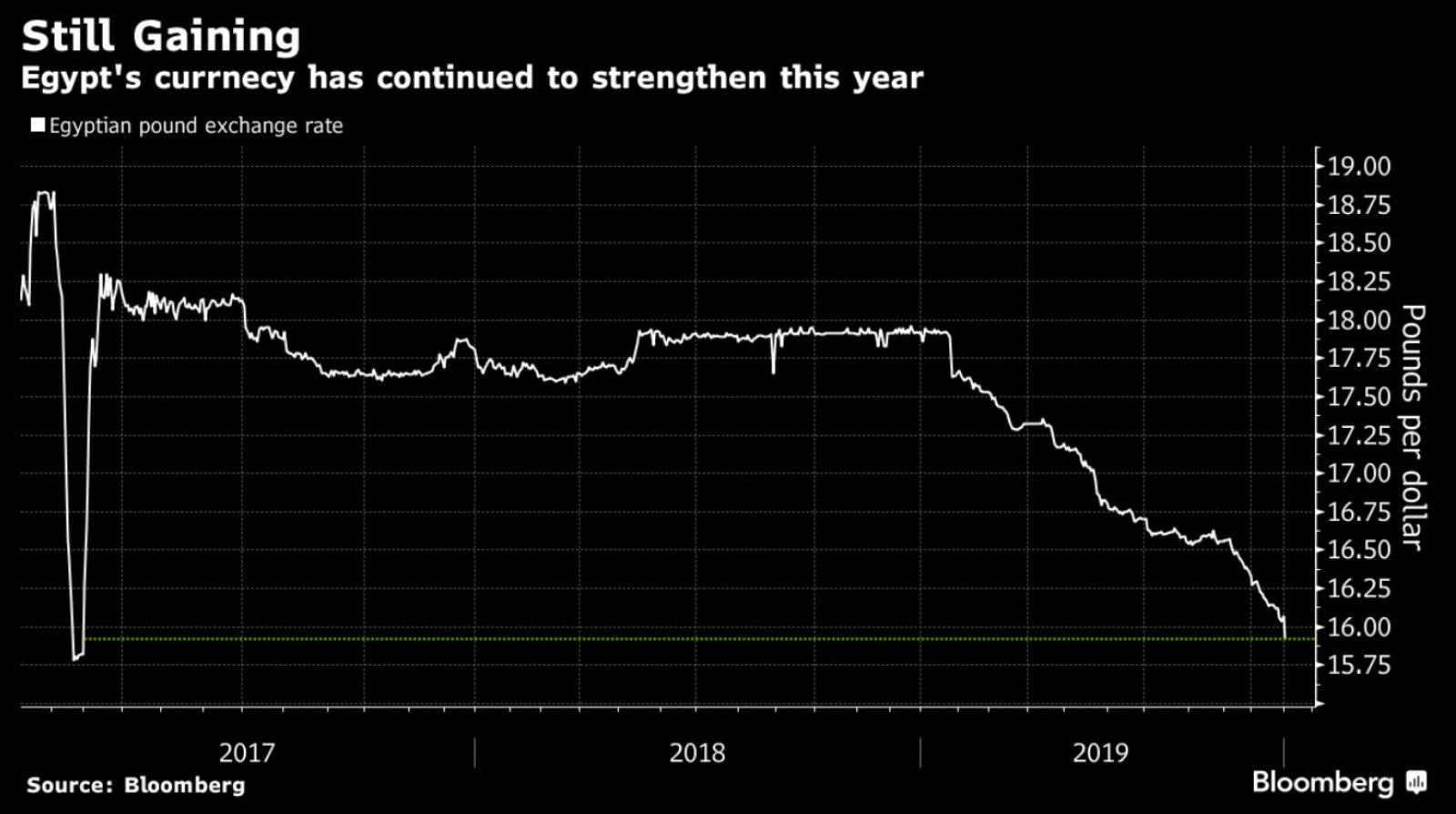 The EGP is expected to appreciate 3.7% by the end of the year to trade at EGP 15.35 per USD, according to a forecast by Societe Generale cited by Bloomberg. The EGP has added appeal amid a narrowing current account deficit and growing tourism revenues, the news information service cited EFG Hermes analysts Mohamed Abu Basha and Moustafa El Bakly as saying in a research note. “This supports a favorable view for the EGP, which is still gaining foreign-investor traction, thanks to high real yields,” Abu Basha and Bakly said.

Where do we stand on the rally: The EGP has been one of the world’s best performing currencies of 2019. It has extended a year-long rally, breaking the EGP 16 to the USD mark at the end of the year for the first time since February 2017. The rally picked up further steam earlier this week, gaining up to 14 piasters against the greenback since Wednesday. The average buy exchange rate posted by the CBE stood at 15.81 / USD on Tuesday evening, driven by USD 1.7 bn in FX inflows since last week.

What this means for monetary policy: Given that Egypt is an import-reliant economy, a strong EGP bodes well for inflation, but the currency’s steep gains against the USD could force policymakers to cut rates perhaps more aggressively than they should.

More easing could be good for the EGX: UAE-based asset management arm ADIM, which has avoided Egyptian equities since it was established, is now recommending investors rethink their positions. Yazan Abdeen, head of equities at ADIM’s parent company, told Bloomberg Daybreak yesterday that the central bank’s efforts to channel inflows away from treasuries and toward the EGX through monetary easing bodes well for the bourse (watch, runtime: 4:21).

But channeling funds to the EGX could prove challenging if the EGP keeps appreciating. Investors that have mostly been attracted to treasuries would not be prompted to increase their exposure to stocks if they continue to benefit more from high real interest rates, now coupled with profitable currency arbitrage.

All eyes will be on the CBE tomorrow: This all comes as the CBE’s Monetary Policy Committee is due to decide on rates tomorrow. Analysts we polled ahead of the meeting are mixed, with four out of seven calling rate cuts and three expecting the MPC to hold. A Bloomberg survey of economics, meanwhile, showed higher consensus in favor of a cut.