Good morning and happy hump day, everyone. We’re still barely halfway through the week, but we’re getting there. And we’re exactly two weeks away from the 23 July national holiday. Revolution Day will fall on a Tuesday, making a weekend bridge unlikely, but at least we’ll get a mid-week break.

Expect a busy few days ahead on the legislative front as our representatives race to cross the I’s and dot the T’s on outstanding legislation before heading en masse to Sahel by the end of the week for their summer recess.

The NGOs Act is on today’s agenda: The House Social Solidarity Committee is scheduled to continue today its discussion of the proposed new NGOs Act, which would replace the controversial 2017 NGO law, reports Ahram Online. If all goes according to plan, the law should be passed on Wednesday or Thursday, committee head Abdel-Hadi Al-Qasabi said. The NGO law passed in 2017 placed sharp restrictions on civil society and was roundly criticized by NGOs and the global press. As a result, President Abdel Fattah El Sisi directed the government to amend the legislation during last year’s World Youth Forum.

Also coming up this week: Inflation figures are set to be released, and the central bank’s monetary policy committee meets on Thursday to review key interest rates. All nine economists we polled expect the CBE to leave rates on hold.

Gold’s Gym in Giza (kind of) sank into the Nile earlier this week after the boat housing the gym partially collapsed (watch, runtime: 00:38). An MP has called for an investigation to hold whoever responsible accountable, Egypt Independent reports.

Afcon’s round of 16 wrapped up yesterday with Ivory Coast delivering a 1-0 win over Mali and our Tunisian neighbors managing to edge out Ghana in a penalty shootout. The quarter finalists are Senegal, Benin, Nigeria, South Africa, Ivory Coast, Algeria, Madagascar, and Tunisia. The quarter finals will kick off tomorrow at 6 pm CLT. For the full list of upcoming games, click / tap here.

The Pharaohs need to become more like the army -former coach: Farouk Gaafar, who managed Egypt’s national team in 1996-1997, has called for a military officer to take charge of the Egyptian Football Association (EFA), Reuters reports. “This timing needs discipline that will be found only in the army,” he said on Sunday, adding that someone with “an iron fist” needed to be put in charge of the country’s football governing body. 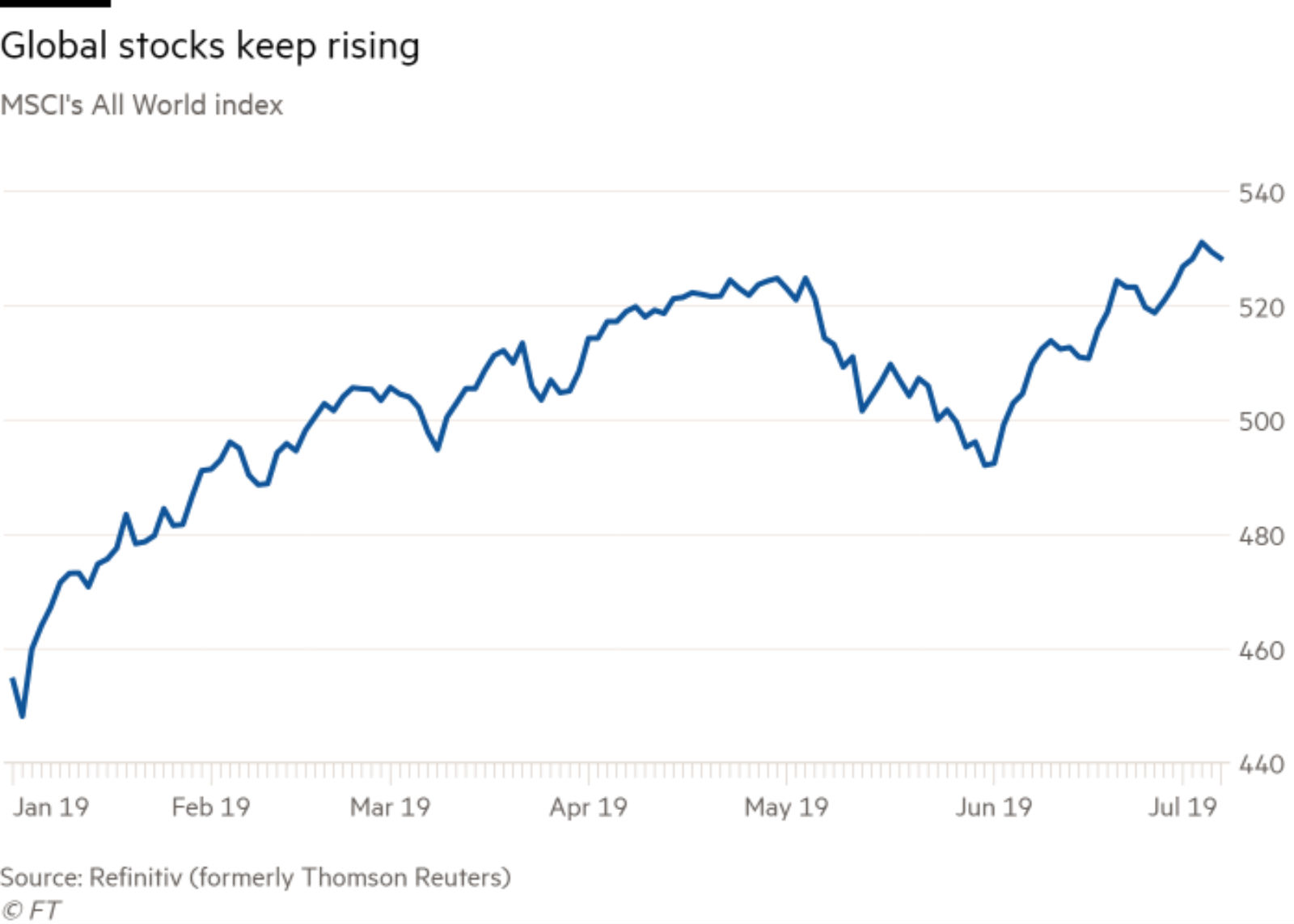 JPMorgan is bullish on global stocks: Global equity prices will rise by up to 15% over the coming 12 months, equity strategists at JPMorgan predict. “While the consensus view is that multiples can only go lower, we think there is a potential for the market to start to price in that the US Federal Reserve will end up too dovish for the remainder of the current cycle,” they wrote, according to the FT.

But Morgan Stanley doesn’t agree: Morgan Stanley has reduced its global equities allocation to five-year lows and changed its investment recommendation to underweight (meaning that investors should reduce their holdings). Bank strategists wrote in a note that profit forecasts are unrealistically high as global manufacturing indicators continue to flash red. “We see a market too sanguine about what lower bond yields may be suggesting — a worsening growth outlook,” they wrote, according to Bloomberg. “Continued deterioration in global PMIs suggests a macro environment with plenty of downside risks.”

EM bonds are better positioned for an equity sell-off: The bank has increased allocations of emerging-market and Japanese government bonds in anticipation of a market downturn. “Emerging market fixed income won’t be immune in a larger equity sell-off, but we think it will do better,” the bank wrote in a note.

Communal workspace app WeWork is looking to raise as much as USD 4 bn in debt ahead of an IPO in an attempt to bolster investor confidence in the loss-making startup’s financial sustainability, a source familiar with the matter said, according to Reuters. “The potential debt offering underscores the extent to which the disappointing public market debuts for Uber Technologies Inc and Lyft Inc prompted other loss-making startups with lofty valuations looking to go public to reassess their plans.”

Surprise — Erdogan’s decision to fire Turkey’s central bank governor did the lira dirty: The Turkish lira dropped 1.8% against the greenback and the country’s assets came under pressure after President Tayyip Erdogan decided to fire the central bank governor, Bloomberg reports. All things considered, “the fallout has been relatively contained,” thanks to otherwise OK fundamentals and a favorable climate across EMs.

Turkey is also stirring up trouble in the Mediterranean again with a new drilling operation for natural gas in internationally recognized Cypriot waters. The EU’s foreign policy branch said in a statement yesterday that the plan is “of grave concern” and “a further unacceptable escalation which violates the sovereignty of Cyprus,” Reuters reports. Ankara had announced in May its plans to start its first drilling operations after the Cypriot government stepped up cooperation on hydrocarbons with Egypt and Greece.

Iran has officially enriched uranium beyond the purity limits set out in the 2015 nuclear agreement, the International Atomic Energy Agency (IAEA) confirmed yesterday, according to Reuters. Tehran is believed to have reached a 4.5% purity level, which is above the 3.67% threshold allowed under the agreement, and is now threatening to reactivate centrifuges and reach a 20% purity level. Iran insists that the ramping-up of uranium enrichment would still be for peaceful purposes, and would not be used to build a nuclear weapon.

This all helped keep oil prices steady yesterday, “as tensions over Iran’s nuclear program countered concerns about whether slowing global economic growth would hit oil demand,” according to the newswire.

In global miscellany this morning: