The results of our Enterprise 2020 reader poll 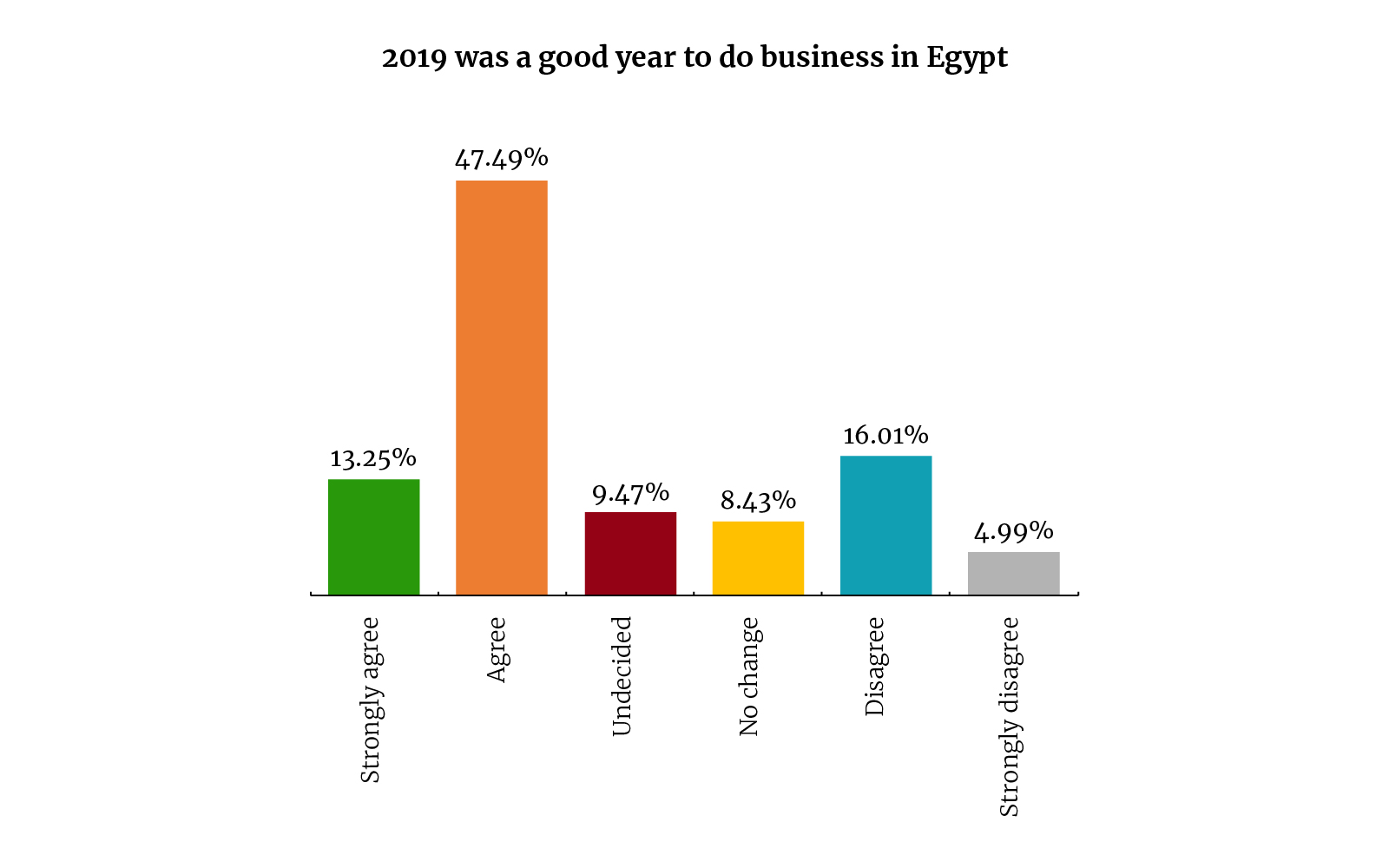 For all of the complaining, 2019 was a pretty good year in which to do business in Egypt, you told us in our fourth annual Enterprise Reader Poll — and you expect 2020 to be even better. Around 48% of poll respondents said last year was good for business. This is a slight increase from the 46% of you who said that 2018 was a good year for business. But it also falls short of the 63% of you who were happy with business conditions in 2017, the high water mark for business sentiment after the float of the EGP in late 2016.

(You can also tap or click here to see the poll results on our website if that would be easier.) 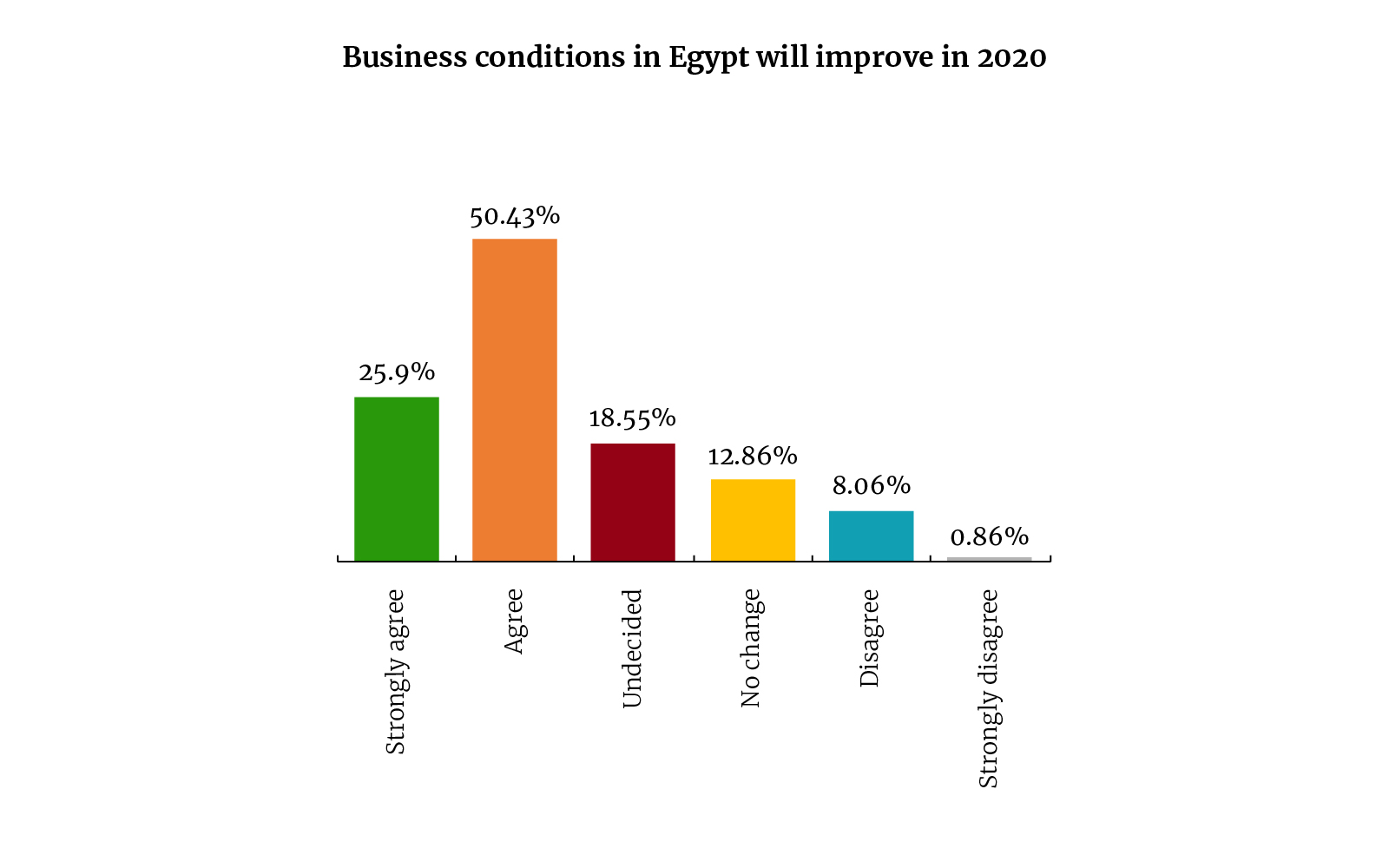 Three quarters of all respondents think business conditions will improve in 2020, while only 8% think they will deteriorate. This year’s respondents appear to be more optimistic than last year, when around half said they expected improvements in the 12 months ahead and 16% foresaw worsening conditions. 31% of you either think conditions will remain unchanged in 2020 or haven’t yet made up your minds about where you see the year heading. 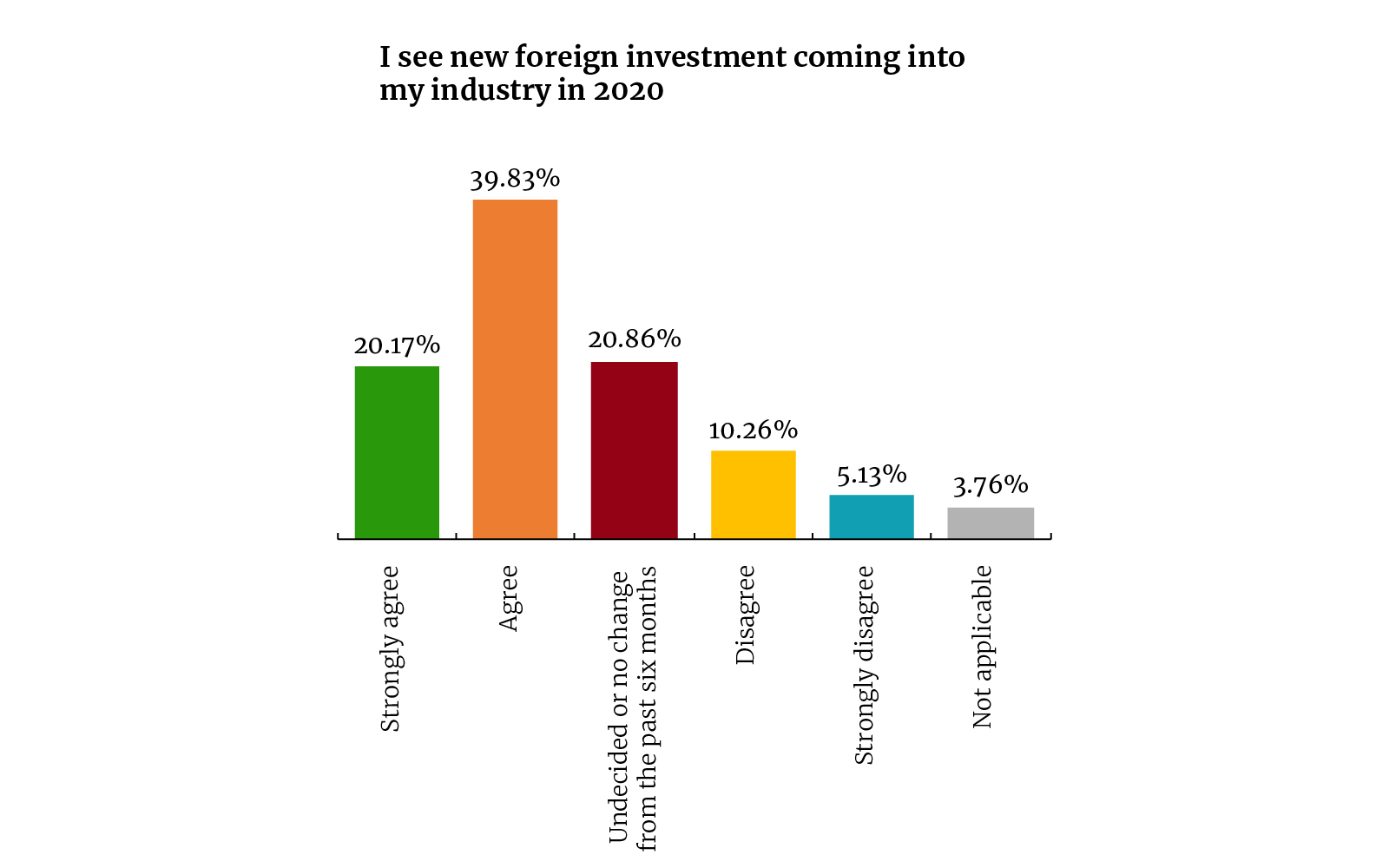 More of you were also more optimistic about foreign investment coming into your industry: A whopping 60% see 2020 bringing with it FDI inflows, compared to 44% who expected the same in 2019. Again, while this number is an improvement from last year, it’s not quite as high as your hopes for 2018, when 65% of you expected foreigners to commit new investments. 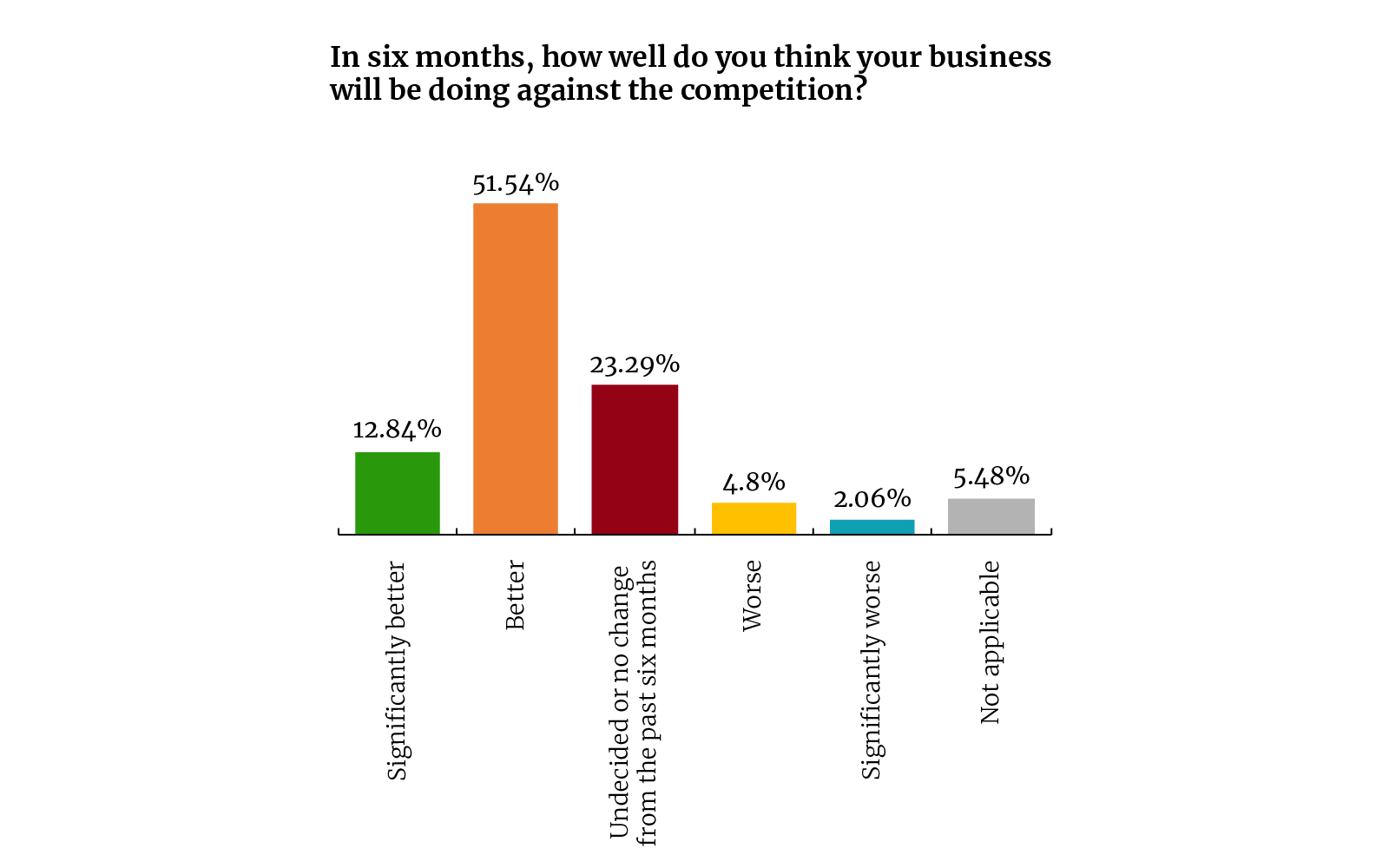 Nearly two-thirds of you expect to be ahead of your competition in six months’ time — and only 7% of you think you will be outperformed by your industry peers. At the beginning of last year, just 54% of respondents saw their businesses doing better than the competition. 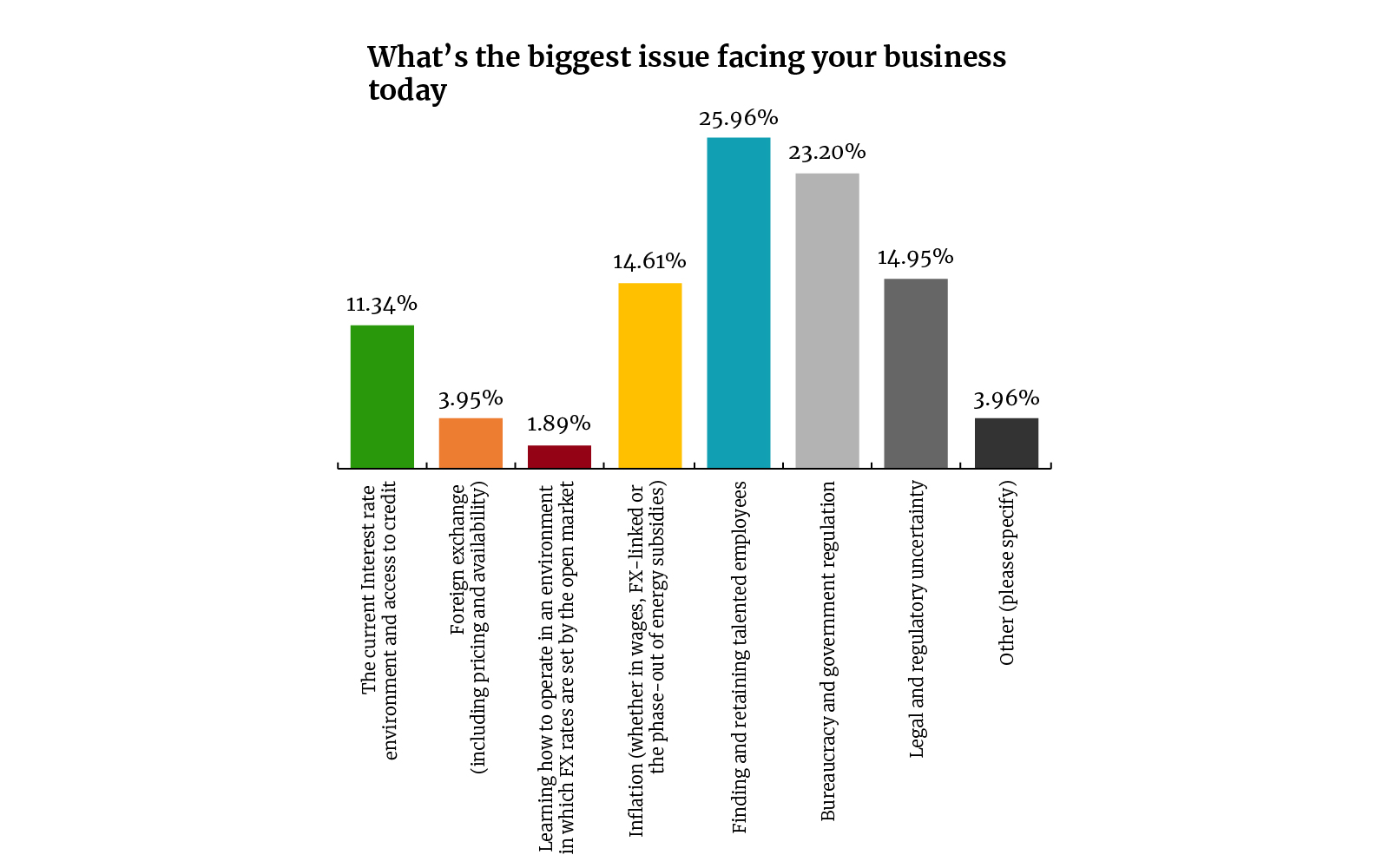 The challenges facing businesses today are largely unchanged year-on-year, albeit with a bit of a shuffle in the rankings. Inflation, high interest rates, and government regulation were all listed as top concerns for our readers. The most pressing challenge today for 26% of our respondents is finding and retaining talented employees. By comparison, it was just the fourth-biggest concern for businesses heading into 2019. Inflation and high interest rates were the two biggest issues for poll respondents last year.

Many of you are also uneasy about the legal and regulatory environment in Egypt. Some 23% of respondents said bureaucracy and government regulation are their biggest hurdles right now, and another 15% pointed to a general sense of uncertainty as to where legal and regulatory policies are headed. 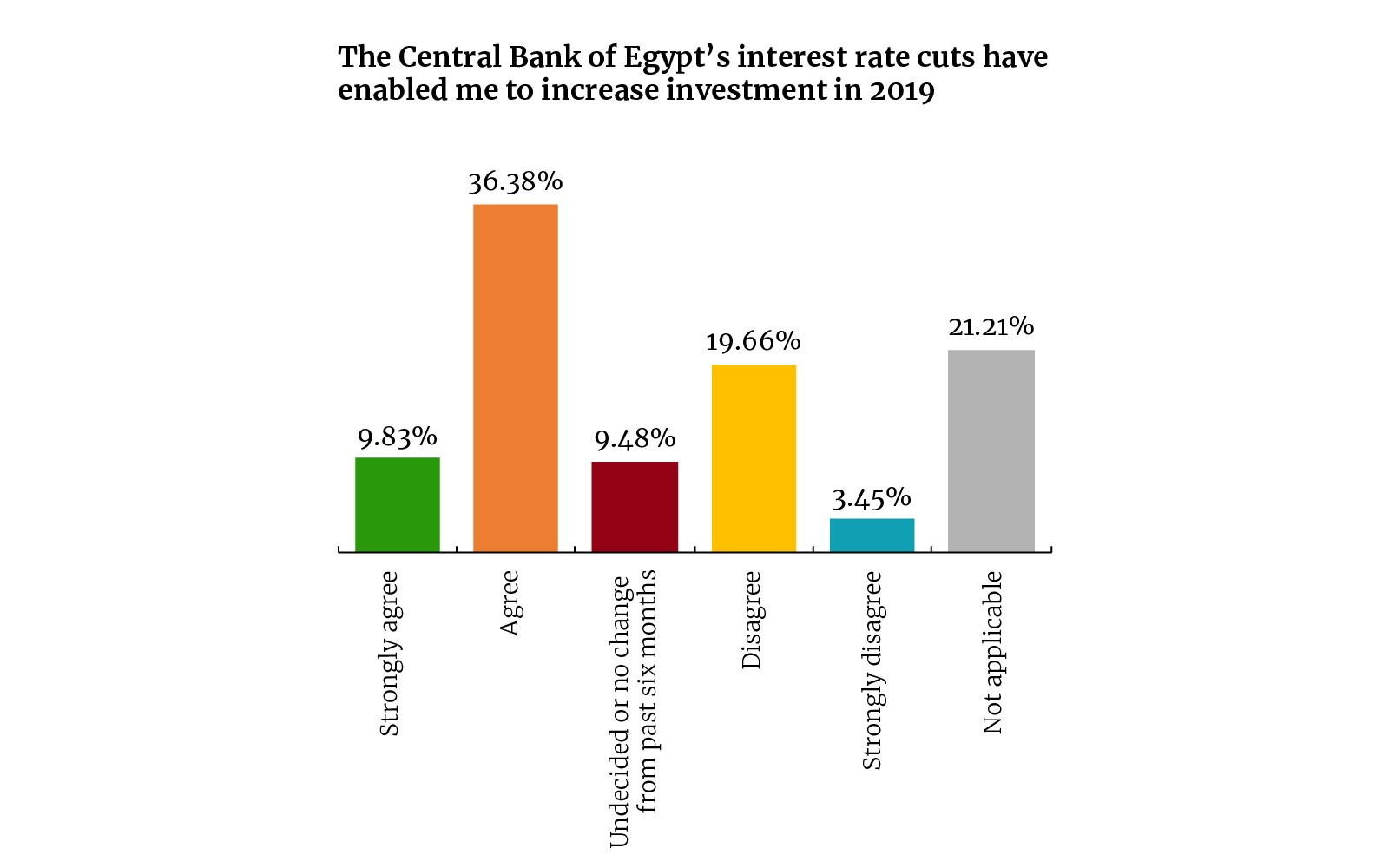 Inflation is taking a backseat as a top concern because 46% of you jumped on the 450 bps rate cuts delivered in 2019 to ramp up investment throughout the year. 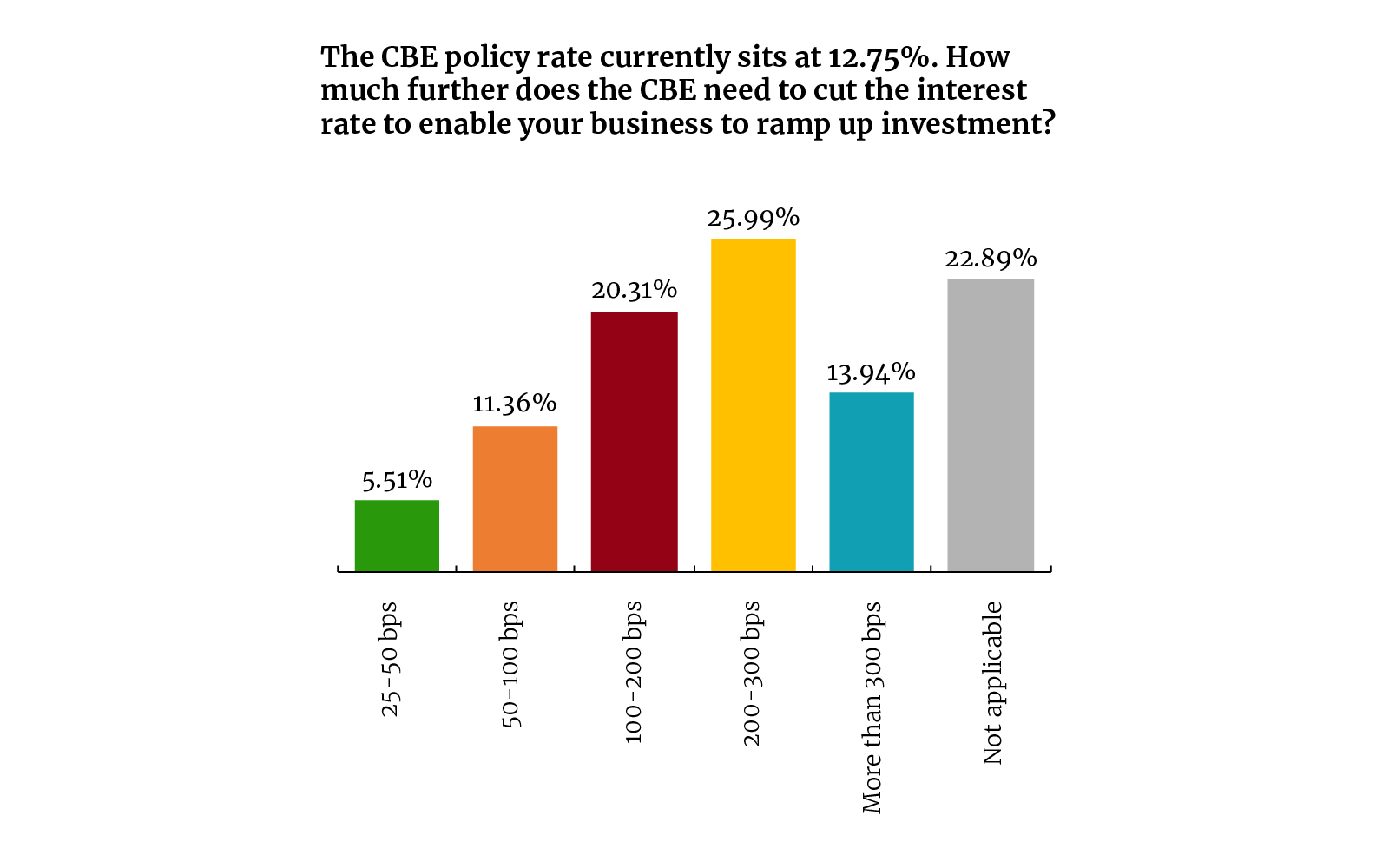 That wasn’t enough for everyone, though: 33% of you still held off on fresh investments in 2019, and 46% still want to see interest rates go down by an additional 100-300 bps to unlock CAPEX spending in 2020 and beyond. 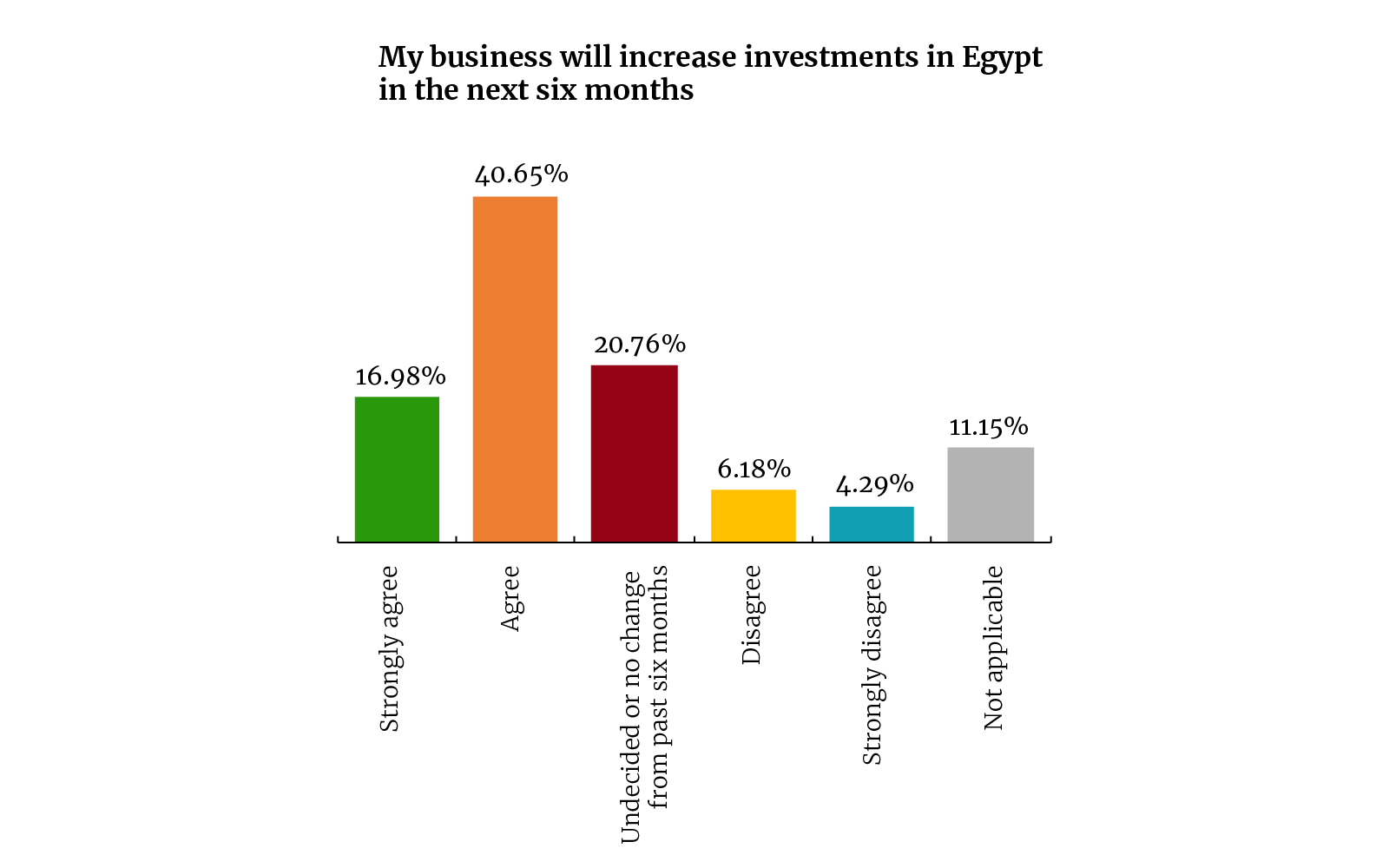 You seem to be optimistic that the CBE will resume its monetary easing cycle this year, as 58% of you plan to increase your investments in Egypt over the next six months. A little less than a third of you are undecided or intend to freeze investments for the time being. 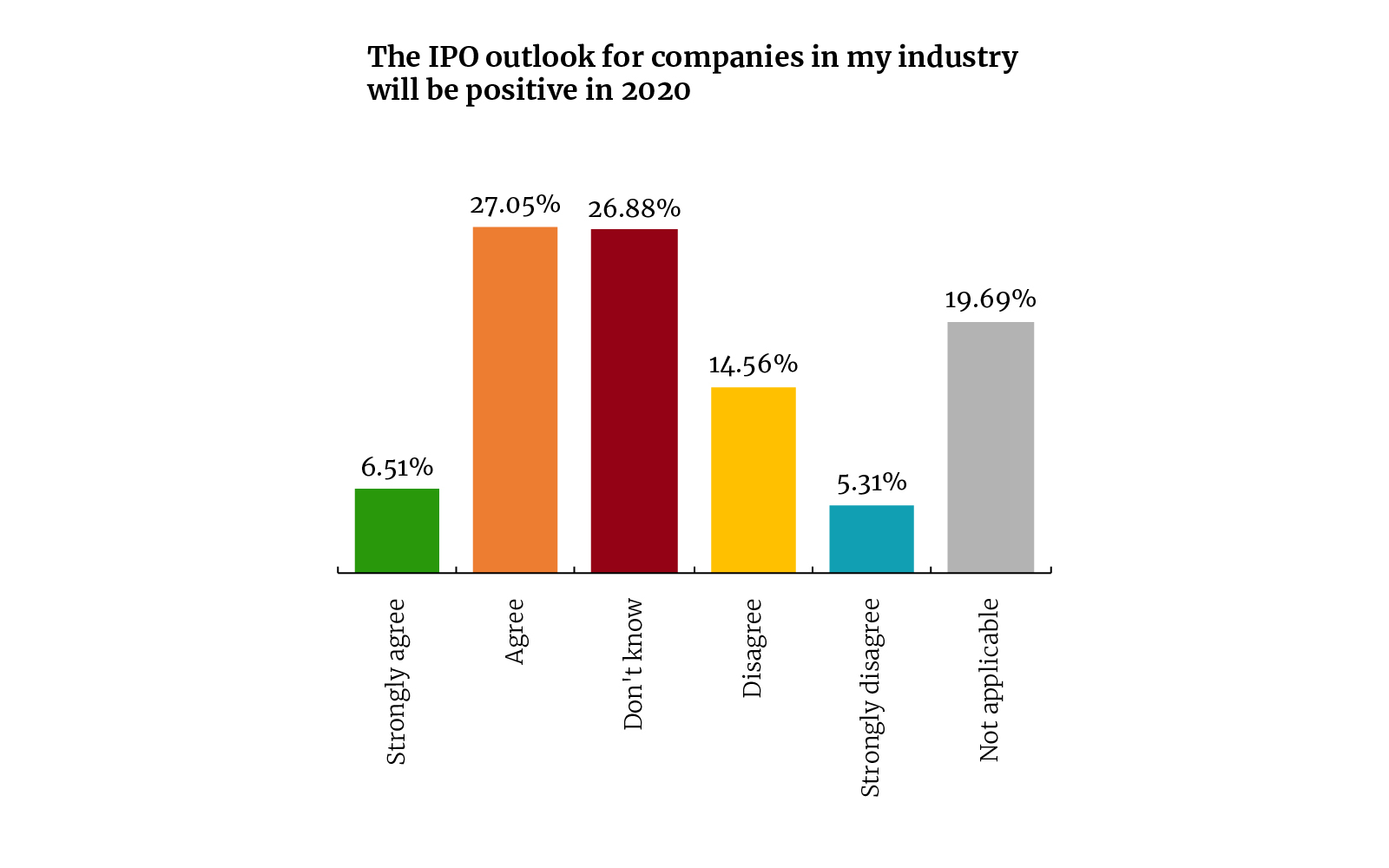 The IPO outlook is a little mixed this year. Just 33% of you think 2020 will see an uptick in IPO activity for your industry, while the majority of respondents seem uncertain of what to expect on that front. 20% of respondents don’t see this year being a good one for IPOs in their industries. 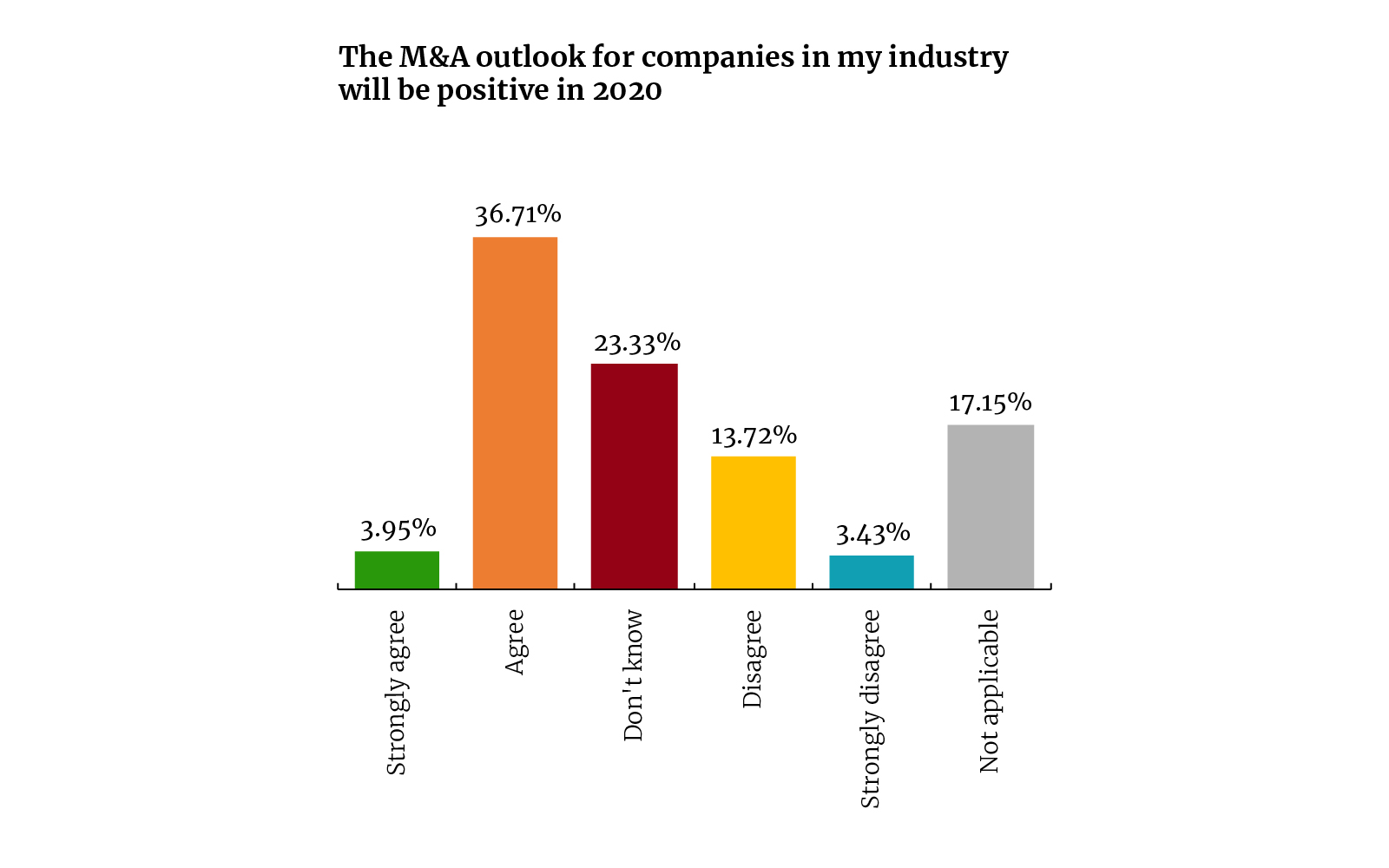 The outlook for M&A is more decidedly positive: 41% of respondents said they think the M&A outlook their industry is positive, compared to 17% who are pessimistic in this regard. 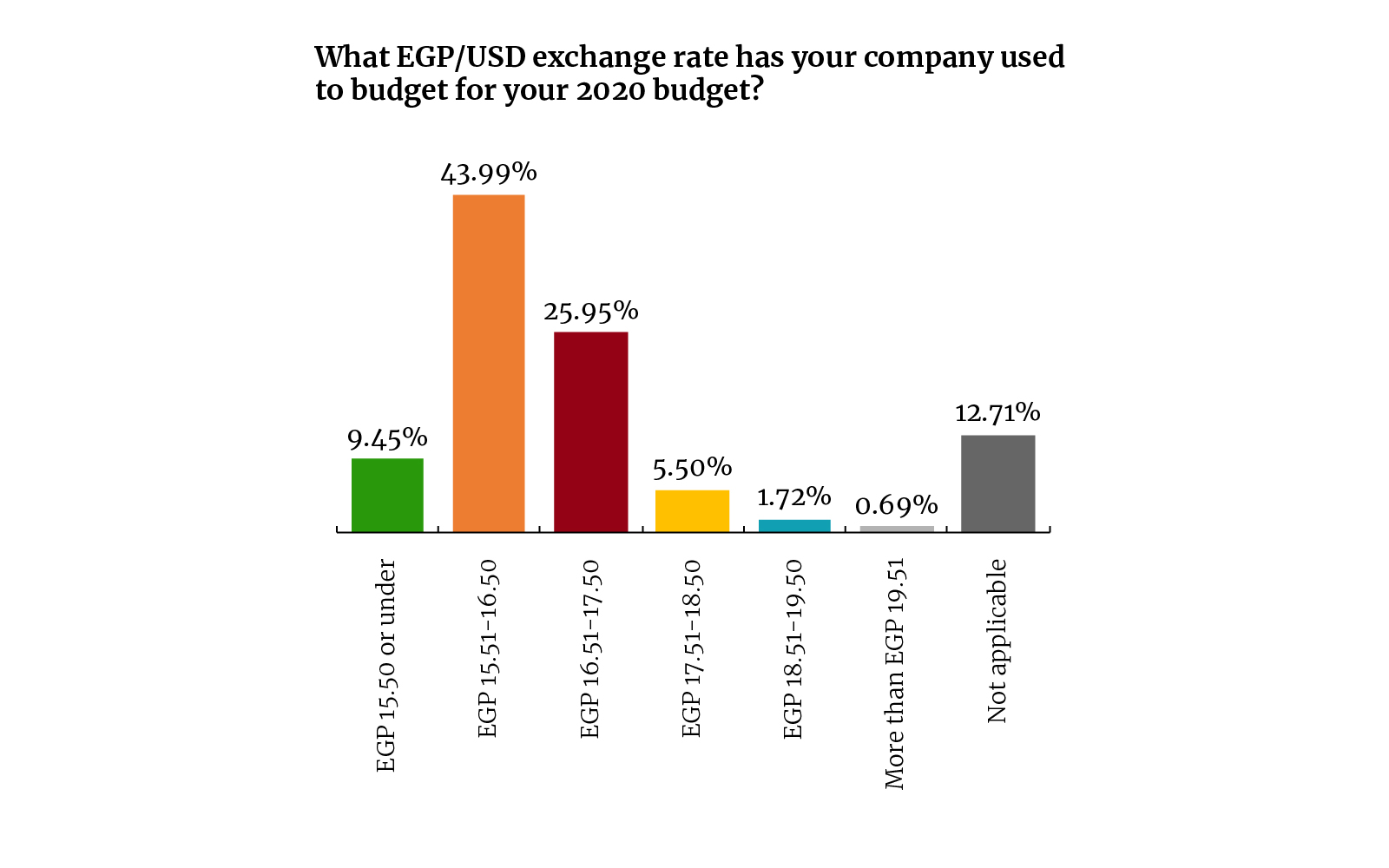 Even with a little bit of volatility in recent months, FX seems to be less and less of an issue for business in Egypt. Around 4% of you pointed to FX pricing and availability as a challenge for operating in Egypt, compared to 5% last year and 10% the year before that.

The majority (44%) of you have set your 2020 budget expecting that the EGP will remain where it is now or erase its recent gains as 2020 wears on. 10% of you think the EGP rally will find a second wind against the greenback to bring the FX rate to EGP 15.50 or under, and very few of you expect the rate to broach the EGP 18.50 / USD 1 barrier again. Around a quarter of you have planned for the exchange rate to sit between EGP 16.51 and 17.50 this year. 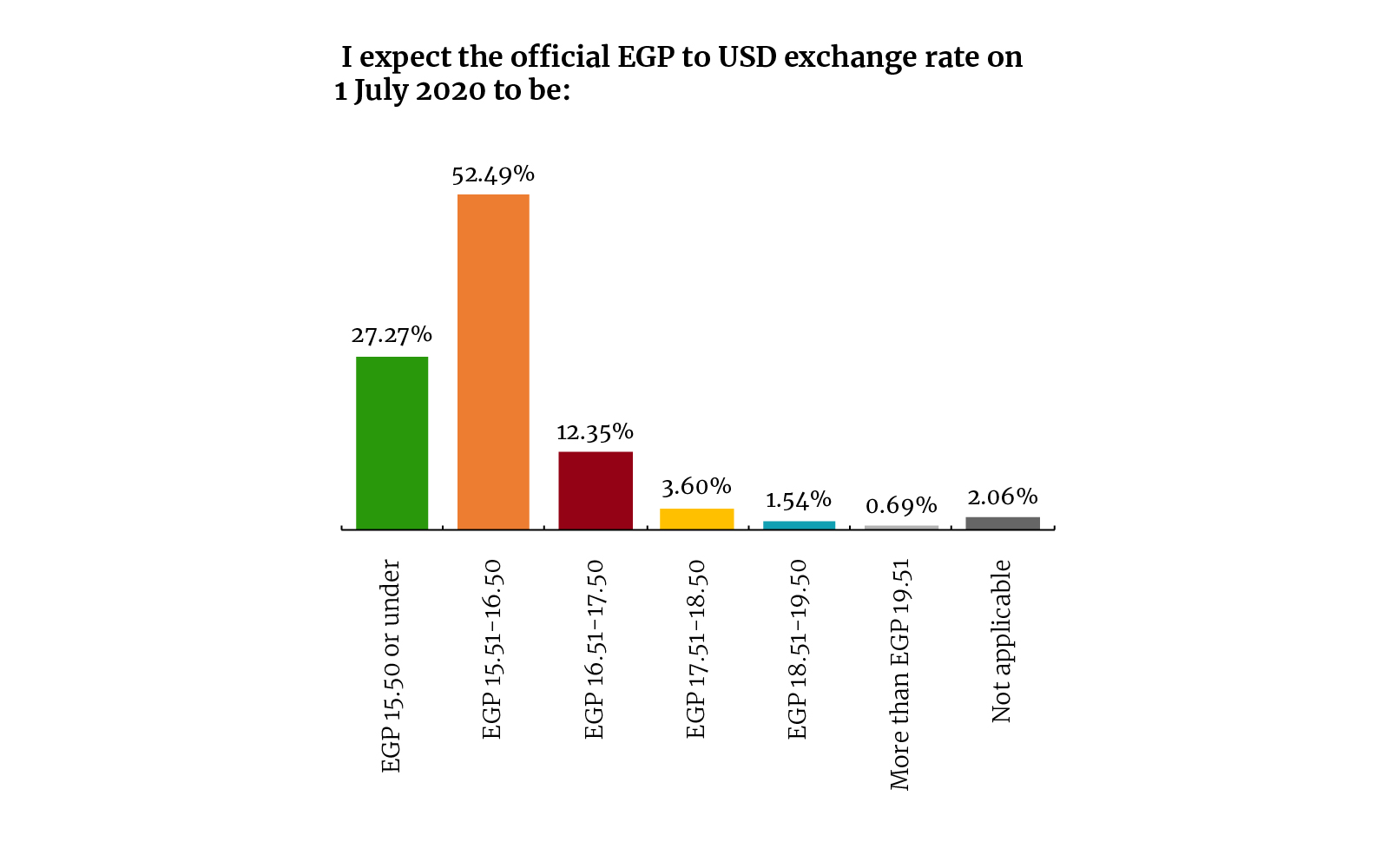 You have planned for a higher FX rate than you actually anticipate: 53% expect the official EGP to USD exchange rate at the beginning of the new fiscal year on 1 July to be between EGP 15.51 and 16.50. That’s a full 9% more of you than those who set that range in your 2020 budget. And while one-tenth budgeted for an FX rate at or below EGP 15.50, 27% of you actually expect that could be the official rate in July. 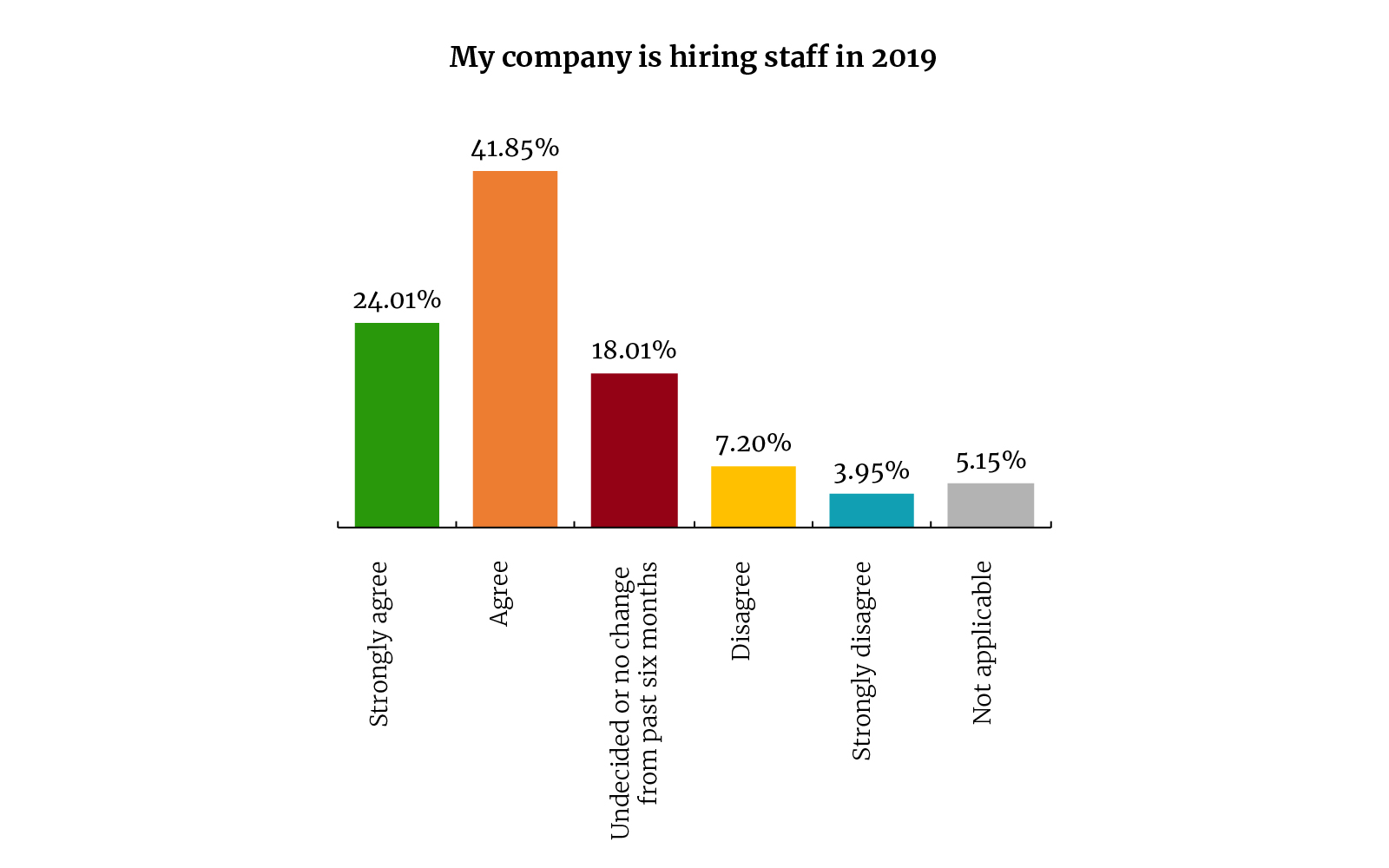 Hiring activity is expected to be at its highest level since the EGP float this year, with 66% of you saying you’ll be adding to your payrolls in 2020. That’s one metric of optimism that is higher than it was in 2017, when 58% of you said you would be hiring new staff. Meanwhile, 18% of you either haven’t decided or expect no change in your staff size. 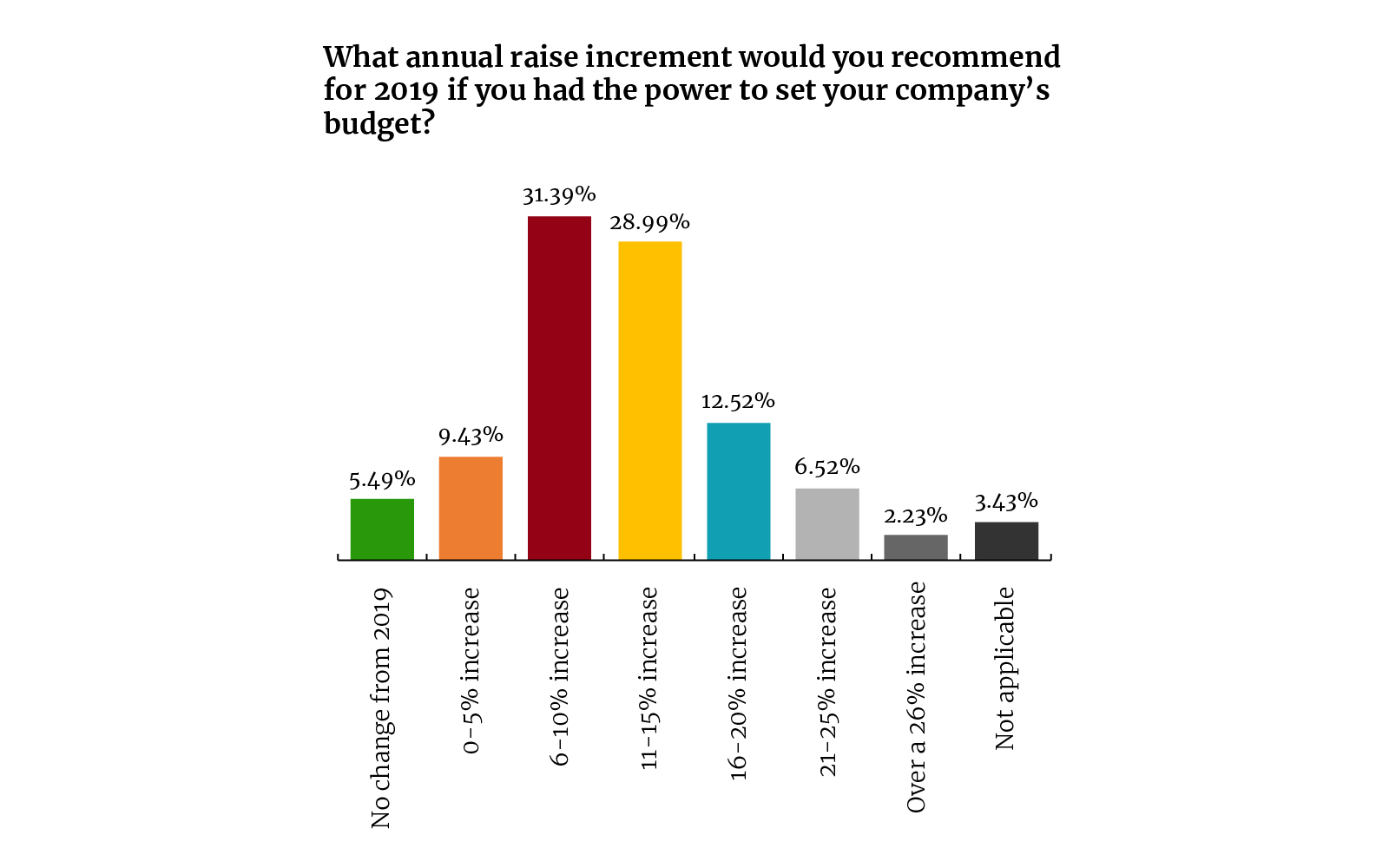 If you were the one signing payroll checks, you would most likely give out a 6-15% annual salary increase in 2020. A handful of you don’t seem to think your colleagues are deserving of any salary bump. All in all, it suggests that business leaders thing the substantial raises of the past few years have helped staff catch up to inflation — and with the cost of living now rising at a slower pace than before, you’re being moderate in your outlook. 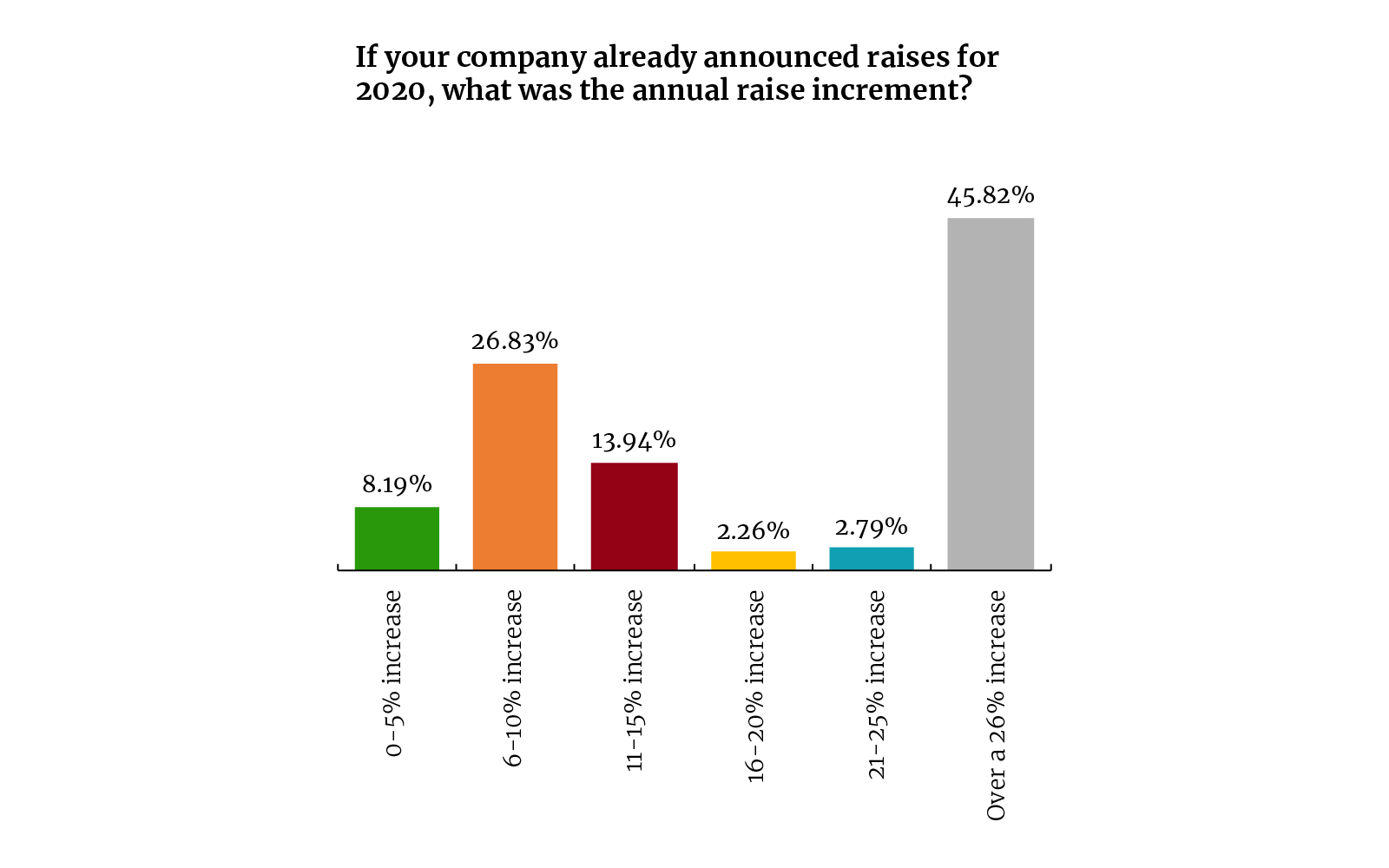 Let’s talk raises for the staff you already have: Most of you who have announced raises for this year are doling out a 6-10% annual salary increase, which is also the same range most of you would give out if you had the power to set your company’s budget. 29% of you would raise salaries by 11-15% if you were the ones signing off on the cheques. Only a few of you (7%) would want to see your staff salaries rise 21-15%, and the 2% of you that wear rose-colored glasses would hike salaries by more than 26% this year. 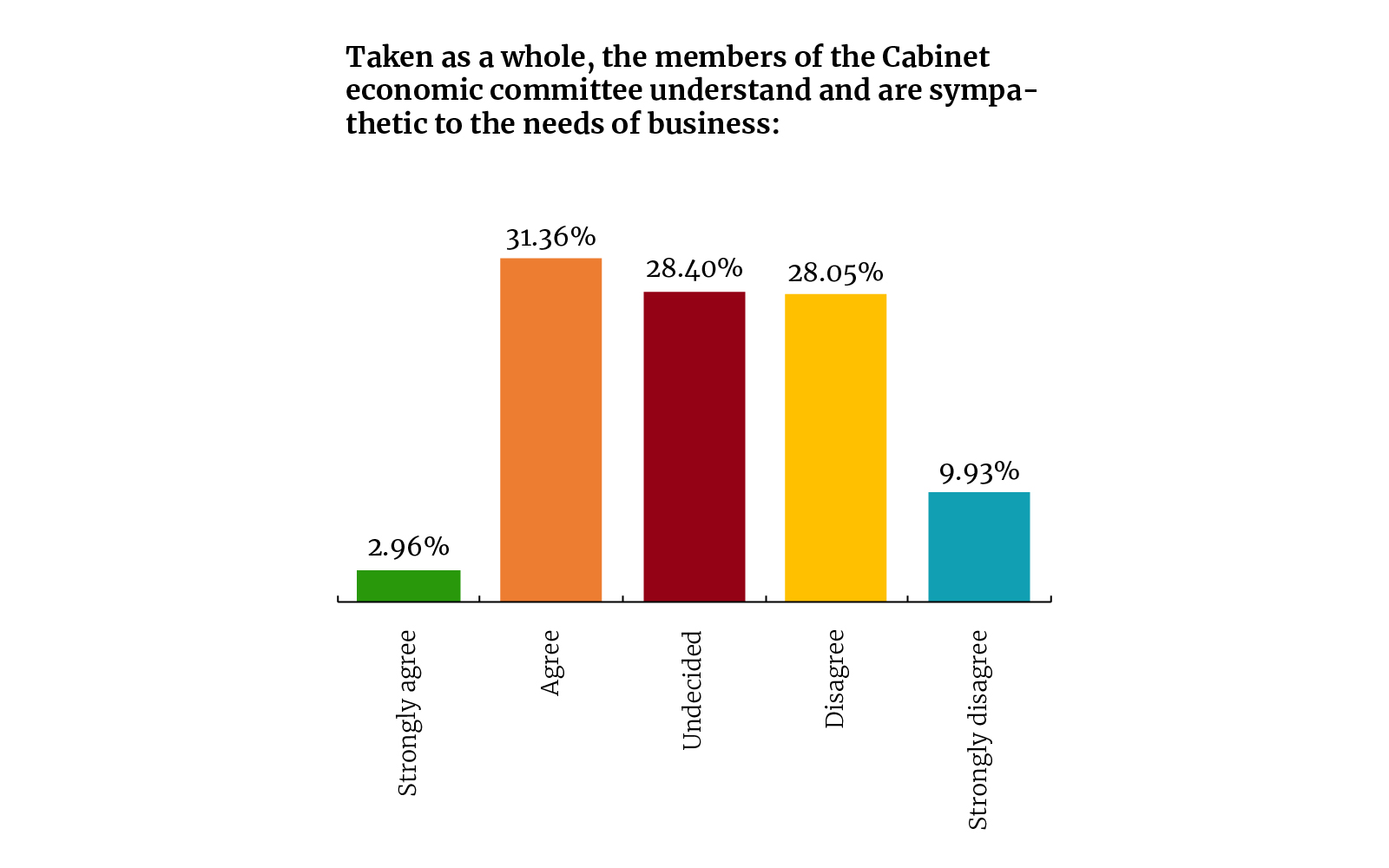 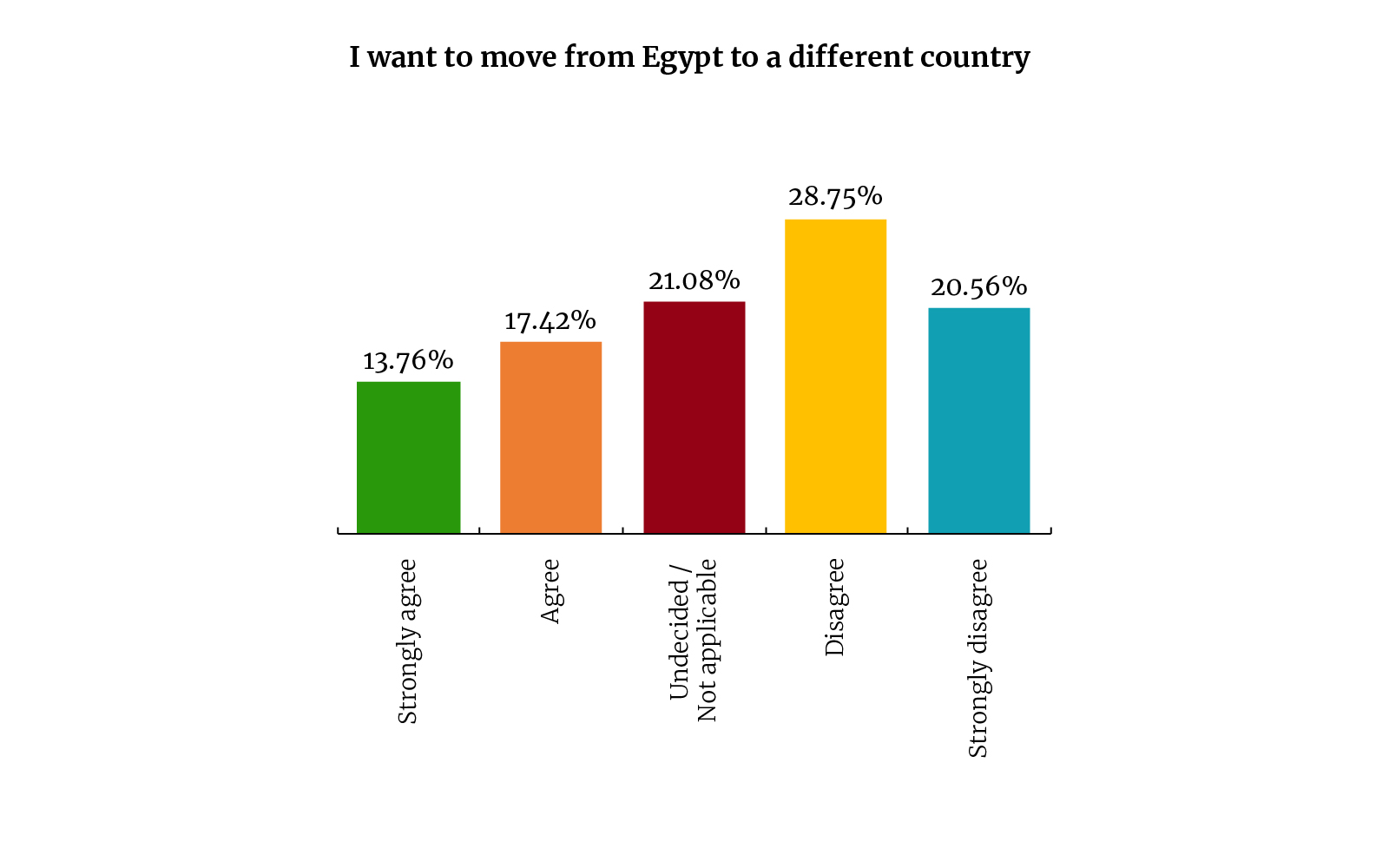 The government’s improving report card is reflected in how you all feel about leaving Egypt behind: Half of you do not want to move out of the country, and a solid 61% of you say you are not considering moving your wealth abroad. By way of comparison, 37% of respondents last year said they’re planning to stick around in Egypt and 41% said they don’t want to move their wealth and possessions out of the country.

Food appears to still be the most obvious choice for you if you were to start a new business this year, but tech is catching up. A number of you said you would likely want to set up a business related to data science, artificial intelligence, the internet of things, or just general tech infrastructure. Fintech was also a popular choice, but munchies still reign supreme.