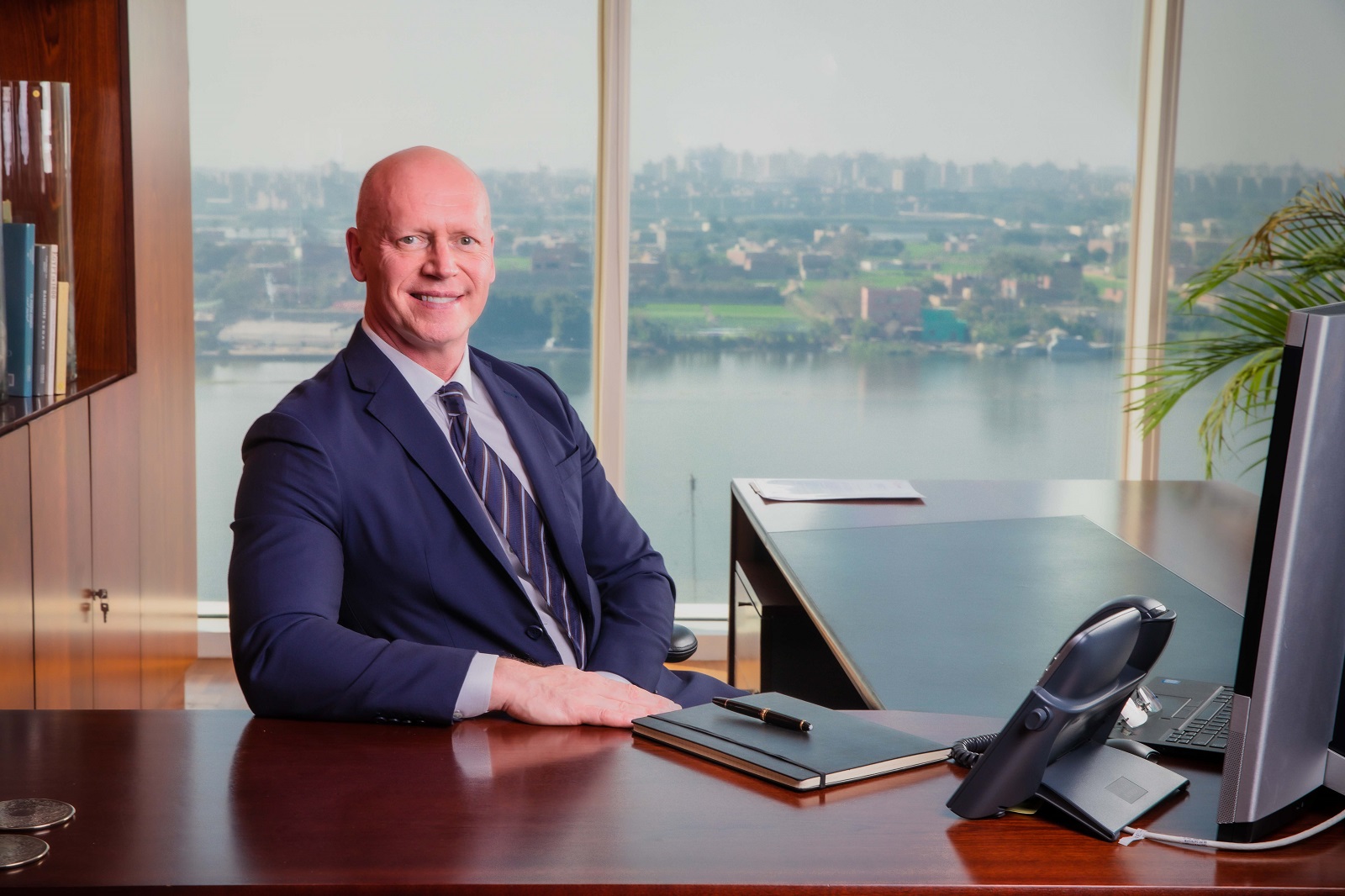 Coffee With: Todd Wilcox (LinkedIn), CEO and deputy chair of HSBC Egypt: In the 40 years since entering Egypt, HSBC has become one of the largest multinational banks in the country. Today, the bank — which first came here as the Hong Kong Egyptian Bank before rebranding to HSBC Egypt in 2001 — caters to clients ranging from the big multinational corporations through to SMEs and women-led businesses.

A self-proclaimed “gym guy,” Wilcox is up at 5am to get his workout in before heading to the office for 8 or 8:30am. He’s been with HSBC for 16 years and was a banker in Canada for 16 years before that, stringing together a career that has taken him from small-town Alberta to Bermuda, Brunei and China. He was named deputy chairman and CEO of HSBC Egypt in July 2020.

He joined us by video from London, where he was on a roadshow as part of the British Egyptian Business Association’s (BEBA) annual business mission to the UK, headlined Road to COP27: bridging the implementation and financing gap.

ENTERPRISE: How often do roadshows factor into your day?

TODD WILCOX: Frequently. This BEBA business trip is an interesting example: I find myself talking with people who are really interested in the Egypt story, but don’t know where to start. They don’t know how to crack into the market. We’re offering that to them. That’s why we’re coming back to do an event in July with businesses who are interested in ESG-compliant opportunities in Egypt. This type of approach is not something I’ve seen taken at, say, a Canadian bank.

We’re also looking at non-resident Egyptians — reaching out, say, to our head of retail banking in Montreal, which as you know has a large concentration of Egyptian-Canadians. We want to bank them in Canada — and connect them to our platform so, for example, they can instantly move money between Canada and Egypt. We have a really unique global footprint, and that’s what’s driving how we look at growth.

E: How are you tackling the central bank’s SME lending requirement when you focus so heavily on large corporates?

WILCOX: On the SME front, it’s tough for us as a multinational, but we have a couple of specific areas we’re interested in. We can’t compete in that space with local state-owned banks. They have reach through their large branch network and dedicated systems. So we focus on smaller Egyptian companies that are working with multinationals as suppliers — and we look at areas in which our strategic interests and unique advantages collide, including those within the tech and sustainability space in particular.

E: Is it safe to presume that you’re talking about fintech startups there?

WILCOX: Absolutely, Egypt is a clear MENA fintech hub. It was a surprise for us and for me. These are companies we want to bank, these are companies we want to partner with. We’ve put together a lending program to finance and work with fintech players. The scene here is really strong — Egypt has great venture capital firms and accelerators. If you’ve gone through one of those and you’ve gotten funded? Then odds are good you have the governance, the systems and expertise that make you very interesting to us.

The program is open to tech-enabled companies looking to scale up within Egypt’s growing digital economy. We’re targeting business sectors including fintech, e-commerce, retail and mobility, health, education, and software. The program is also prioritizing companies with sustainable development targets embedded in their business plans, particularly as COP27 is coming up in Sharm El Sheikh this November.

The VC industry here is unbelievably sophisticated. They’ve taught me that the companies they back have cross-border aspirations, that they’re pushing into KSA and the UAE — two of our other regional priority markets alongside Egypt. We’re the right bank for that, and that’s why we’re bringing someone in from New York who has good Egypt experience to focus just on tech.

E: You mentioned ESG a few minutes ago.

WILCOX: Another part of what’s coming up is absolutely the ESG space. As an institution we have net zero targets that we want to hit — and a commitment to move our portfolio into the green space. There are new industries and companies being built; I want to be the bank for anybody building green technology and sustainable projects.

E: HSBC just announced it will be lending USD 1 bn to women-led startups in Egypt and 10 other markets over the coming year. Can you give us color on what that means for Egypt?

WILCOX: It’s really exciting. We’re in 64 markets around the world and Egypt is one of 11 that are participating and I’m pretty pleased with that. This program really fits with our strategy in Egypt, where among other things we’re focusing on the intersection of SMEs, female leadership, and entrepreneurship. Obviously I’m happy the program will see us step up lending here, but it’s about much more than that: It includes advisory from our professionals, classes, and really interesting networking events. Egypt is our only market in the Mideast and North Africa that’s participating.

E: VCs and startups in the US are gearing up for nuclear winter. Part of that is startups worried the economy will fall into recession, but a huge piece right now is that limited partners have stopped writing new cheques to VCs. How does the second half of this year look to you when it comes to the startup space here in Egypt?

WILCOX: I’m still reasonably optimistic. The cost of entry to the space here is very low. The capital you need to get an Egyptian company started and funded is so low relative to, say, the United States, and the potential reward is so great — I think there is a good chance we’ll see VCs decide that the risk-reward equation is so favorable that they’ll continue investing here.

E: What’s your take on how Egyptian policymakers have so far responded to fallout from the war in Ukraine?

WILCOX: I’ve worked in countries around the world, and in my two years here so far I’ve come to one conclusion: Egypt has good policymakers, and I have confidence the final policies they come out with are really solid. Ministers here aren’t politicians, they’re subject matter experts. They’re working with what they’ve got and they’re smart — so you’ve got some confidence that they’re working to make things better.

Finance Minister Mohamed Maait was with us in London last month and we had him in to meet with a number of our clients. He went through Egypt’s policy response in such detail. He is an actuary and a risk manager. That went over very well with the clients. Planning Minister Hala El Said’s traffic light system on where the state is pulling back from the economy is clear. The target for proceeds from privatization — the whole idea that you’ll put in numbers and timelines like USD 10 bn per year for the next four years — that’s great. I think the people at the Sovereign Fund of Egypt are really sharp. The specificity with which they speak tells me the vision comes from the top of the house — and that tells me that they mean business. Egypt, like everyone else, will experience short-term bumps, but we are hopeful we’ll get through it.

WILCOX: Everybody around the planet is coping with external shocks right now, but my take is that Egypt is quite resilient. We’ve been through worse — much worse — and we’ve come out the other side. Egypt will get out of this bottleneck, but it’s going to be a rough year for the whole world. Egypt is one of our three priority markets in this region next to the UAE and Saudi — it’s a market to which we’re committing fresh investment and in which we’re hiring new people.

TAP OR CLICK HERE to read the full interview, including HSBC’s stance on climate in the run-up to COP27 and what’s driving growth at the bank here in Egypt.