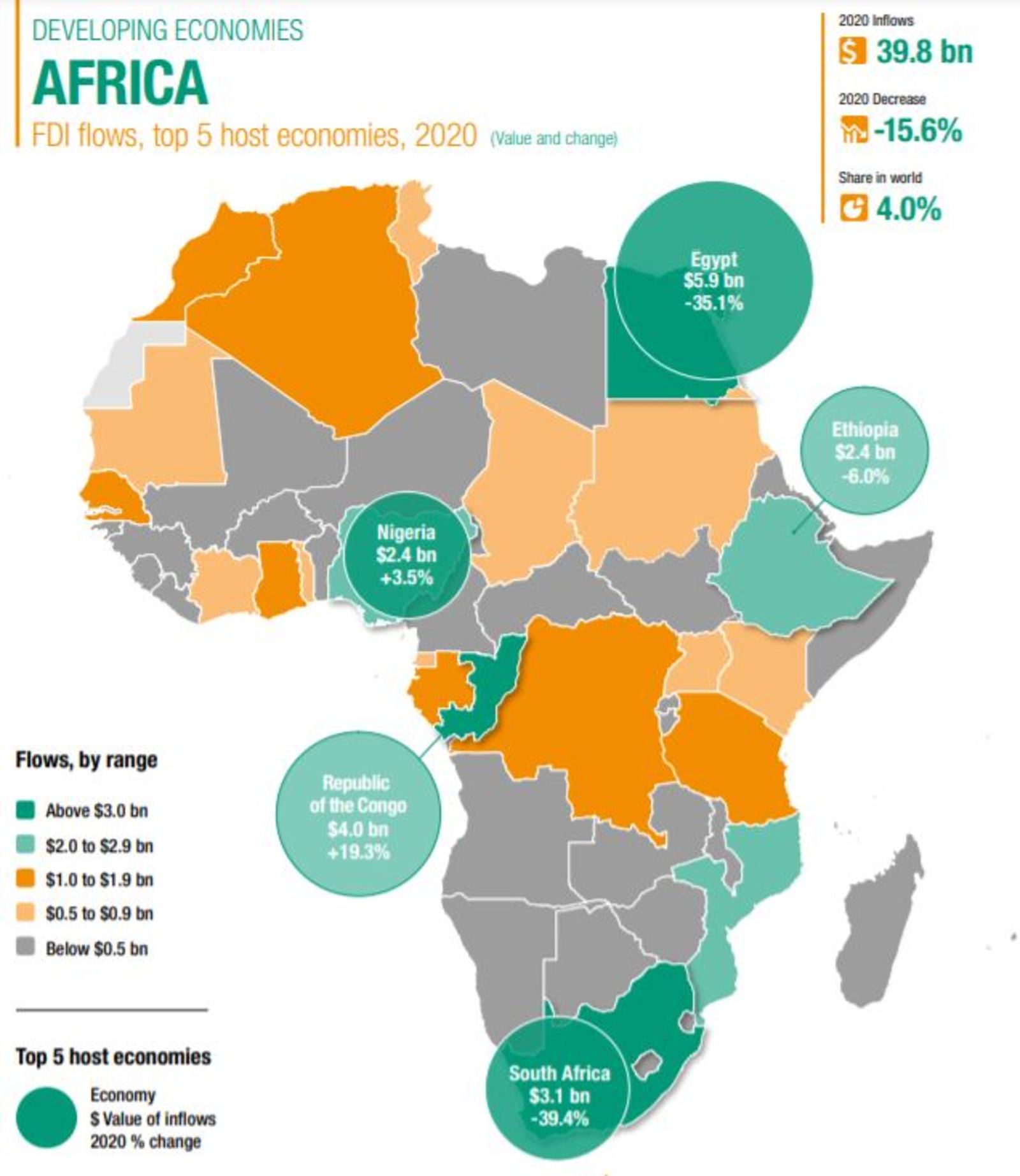 Egypt was the top recipient of foreign direct investment (FDI) in Africa in 2020, attracting USD 5.9 bn in inflows during the year, according to UNCTAD’s 2021 World Investment Report. This corresponds to net FDI of USD 5.5 bn as outflows stood at USD 327 mn during the year, the UN’s trade and investment body said. The figure is an upward revision from the USD 5.5 bn estimated by UNCTAD in a report last January.

Egypt is a regional powerhouse when it comes to FDI: Inflows into the country were well over half of the USD 10.1 bn of North Africa, and accounted for 15% of a total of USD 39.8 bn coming into the entire continent.

But covid still bit: Net FDI into Egypt dropped on an annual basis more significantly than the regional average. The figure dropped 35.1% y-o-y — almost double the 16% decrease in Africa and more than the 25% average fall in North African economies. Still, the drop was on par with the global average, which saw FDI plunge thanks to the pandemic.

Where we got some brownie points: FDI into Egypt is still primarily concentrated in the energy and natural resources sectors, whether this involves development work at the supergiant Zohr natural gas field or other oil and gas projects. This could change as Egypt prioritizes diversification, the report says, citing recent progress on activating the long-dormant USD 16 bn Saudi-Egypt investment fund.

Where we took a hit: Across Africa, new greenfield project announcements particularly suffered, falling 62% throughout the year. The only greenfield project in Egypt that got a mention in the report was Chinese smartphone Realme recently setting up shop with a USD 210 mn regional distribution and after-sales service facility in Cairo that will act as a hub in Africa.

Globally, FDI fell by 35% in 2020 as inflows were “severely hit” by the covid-19 pandemic. Inflows dropped to USD 1 tn, down from USD 1.5 tn and to their lowest level since 2005. The poor FDI performance was primarily during 1H2020 when the pandemic was at its peak, with cross border M&As and finance agreement mostly recovering during the second half of the year.

Emerging markets fared a little better, but still suffered from a lack of greenfield investment: FDI into EM fell only 8% in 2020, compared to a whopping 58% across their developed counterparts. This was primarily due to Asia holding firm in the face of the FDI collapse. This gave emerging markets a larger share of global FDI as they now account for two thirds of overall inflows, up from under 50% in 2019. However, greenfield activity fell sharply in the developing world, with new project announcements dropping 42%, compared to 19% in developed countries. The number of new financing agreements was also down in developing countries by 14%, more than the 8% drop in advanced economies.