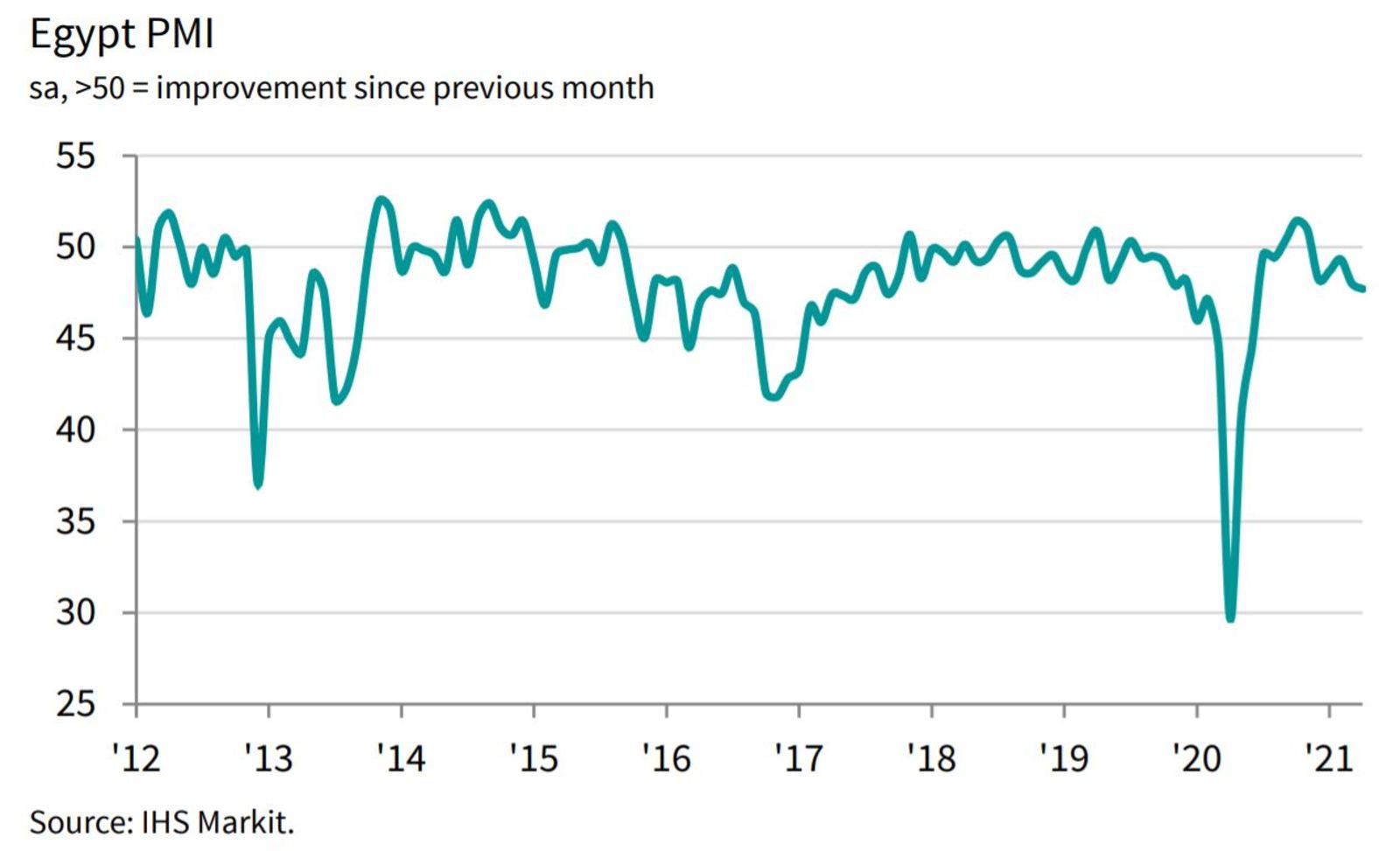 The non-oil private sector in Egypt contracted for the fifth consecutive month in April, primarily as businesses recorded a sharp fall in new orders, output, and employment and higher input costs from the global commodities price rally, IHS Markit’s purchasing managers’ index survey (pdf) found. The PMI gauge dropped to 47.7 last month, below the 50.0 mark — which separates expansion from contraction — and down from 48 in March. The April figure is the lowest reading since June 2020.

Output is continuing to fall markedly, with the Output Index signalling a fifth consecutive m-o-m drop in business activity last month that coincided with a further drop in new business inflows, IHS Markit said. The rate of the fall in output was “broadly unchanged” from a nine-month low recorded in March.

A sub-PMI gauge measuring output growth remained firmly in contraction territory in April, rising only slightly to 46.8 from 46.7 in March, while a separate sub-index for new orders edged up slightly to 47 from 46.9, Reuters noted, citing survey findings.

Weak new orders translated to wide employment cuts, which took the month’s drop in employment levels to its quickest pace in four months.

Speaking of more expensive inputs, inflationary pressures were very strong throughout the month, with the rate of input price growth the fastest on record since September 2019. Overall input costs increased markedly due to higher raw material costs globally that was tied to global shortages and supply chain delays, which led many businesses to increase end prices. Firms reported higher prices for a range of goods including metals and plastics. However, the level of increase in selling prices was lower than the initial bump in input costs.

On the flipside, businesses cited a solid increase in new export orders received through foreign clients, and said this was owed to recovering foreign economies. The sub-gauge for new export orders rose to 53.1 in April from 48.6 in March.

Optimism still (somewhat) pervades: “Firms were still confident of a rise in output over the coming 12 months, although the level of sentiment dropped notably from March,” when Egypt witnessed a surge in the rollout of covid-19 vaccines, economist Davin Owen said. Fewer firms were optimistic about output and new business growth in April than in March, due mainly to a recent uptick in cases and ongoing concerns about financial liquidity. The sub-index measuring business expectations of future output dropped to 65 in April, still notably strong but lower than the 77.2 seen in March.