Private sector business contracts again, but the outlook is rosier 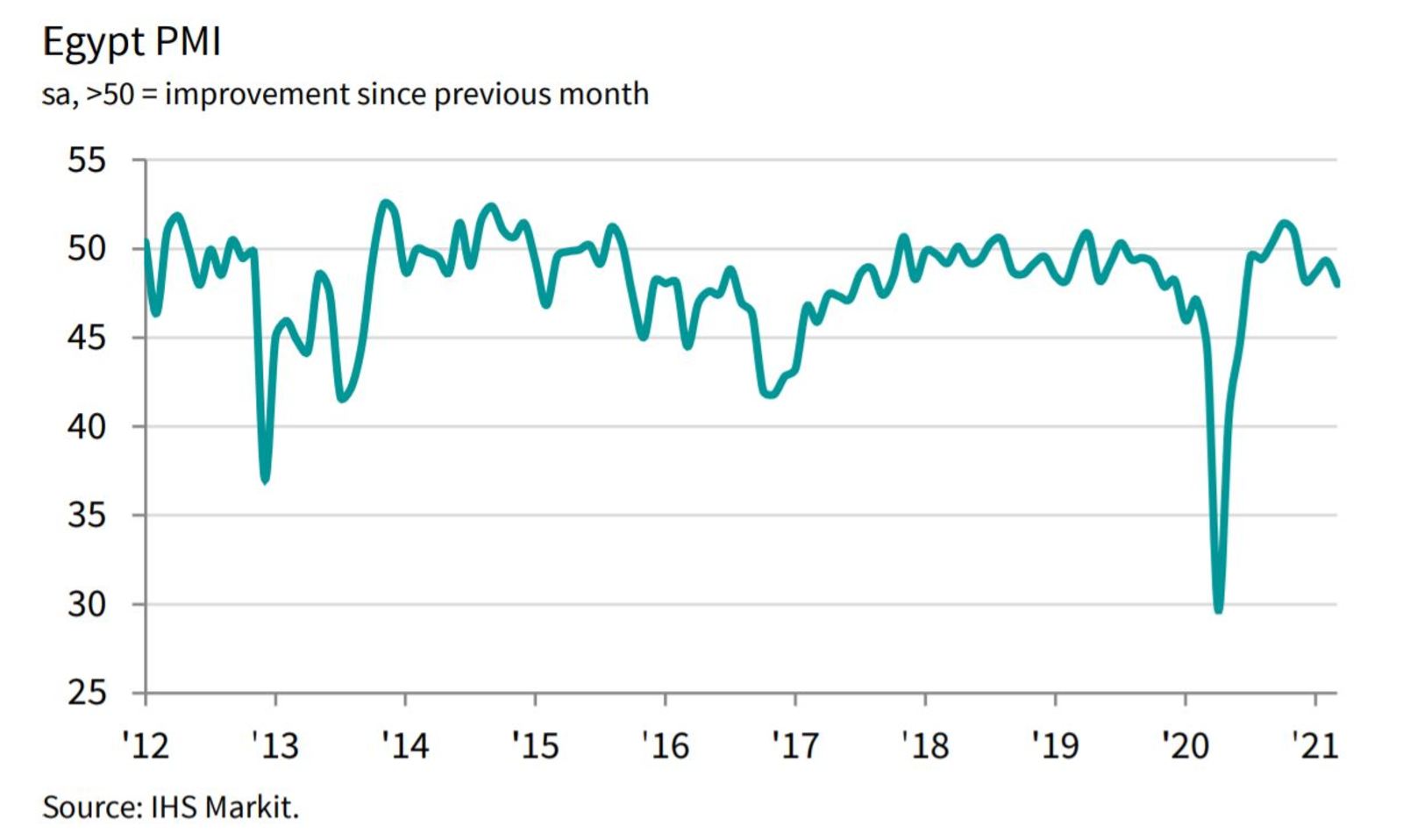 Egypt’s non-oil private sector continued to contract for the fourth consecutive month in March, but optimism reached new highs as the vaccine rollout picked up steam in recent weeks, according to IHS Markit purchasing managers’ index (PMI) figures (pdf). The purchasing managers’ index (PMI) gauge dropped to 48.0 last month, below the 50.0 mark — which separates expansion from contraction — and down from 49.3 in February as output fell throughout the final month of the first quarter of the year. Bloomberg also took note of the story.

The March figure is the first m-o-m drop since it slid into contraction territory in December 2020 — the lowest reading since June 2020. Despite that, businesses are hopeful activity will rise over the coming 12 months, with respondent optimism near a 29-month high last seen in July 2020.

Output fell at its sharpest since June. This decline, along with a slump in new business inflows, was the largest driver of the lower headline figure. New business also dropped at its “joint-quickest rate” during March. The survey attributed the quickest downturn since the original impact of the pandemic — which led to a sharp drop in the PMI reading to an all-time low of 29.7 in April — to weak market demand and ongoing covid restrictions.

New export sales also fell for the first time in three months, after having seen record growth in February, as low demand and restrictions led to fewer orders. This allowed firms to work on backlogs, drawing from existing inventories which fell for the third consecutive month.

Consequently, this translated into a sharp drop in purchasing activity, with businesses citing fewer contracts and a previous build-up in stocks as the driver behind weak input demand. They also experienced “the worst delay to input deliveries since last June.” Naturally, muted activity meant less pressure to build capacity and contributed to less employment, leading to a streak of job losses that is now extending into a year and a half.

On the flipside, inflationary pressures were less stark. While there was a “solid increase” in a lot of input prices including metals (think, commodities supercycle), plastics, and cardboard, the weak demand for those inputs softened overall price growth to a nine-month low.

The ultimate silver lining is record-high optimism. Over half of the survey respondents said they expect activity to pick up this year. The government’s recent expansion of the national vaccine program to cover more segments of Egypt’s population fueled hopes of a more speedy return to normal than was previously thought. "The outlook for future business activity was more positive, as businesses predicted that economic conditions will start to pick up soon as vaccines feed through to a greater reopening of the economy, IHS Markit economist David Owen said.