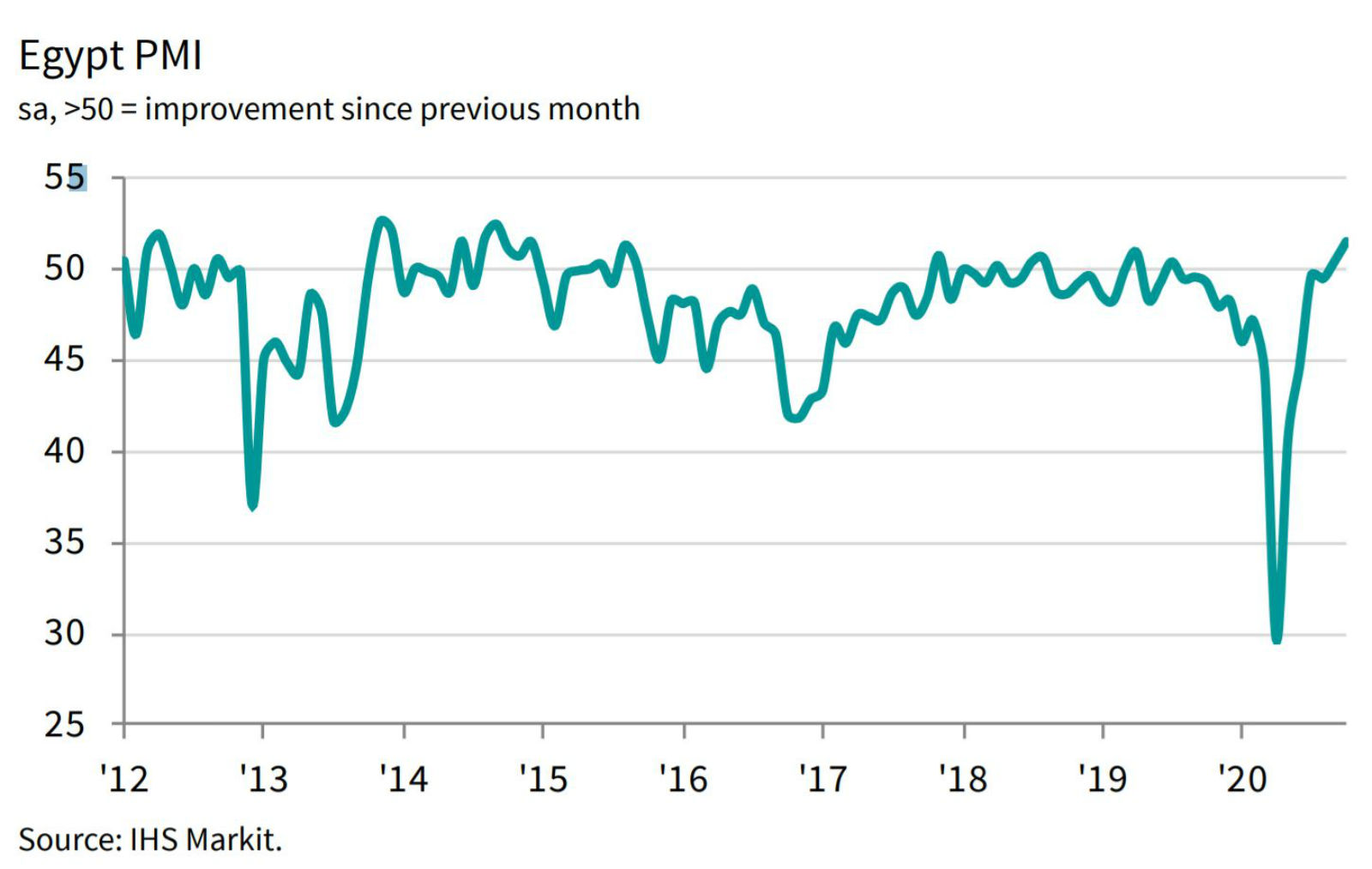 Egypt’s non-oil private sector grew in October at its strongest rate since December 2014 as rising output and new orders kept activity expanding for the second consecutive month, according to IHS Markit purchasing managers’ index (PMI) figures (pdf). The gauge rose to 51.4 from 50.4 in September, a level comfortably above the 50.0 mark that separates expansion from contraction. David Owen, economist at IHS Markit, described the figures as a “relatively strong upturn” but warned that continued weak employment would continue to pose problems for the economy in the coming months.

The non-oil private sector’s recovery since April has been uneven, with conditions first showing signs of improvement in July, but facing headwinds in August due to a sharp increase in job cuts and slowing output growth. The PMI gauge finally broke into growth territory in September, as the loosening of lockdown restrictions began to lift consumer demand.

Business activity expanded at the quickest pace since August 2014 last month as demand held up and looser covid-19 restrictions allowed firms to grow capacity. New orders hit the highest level in six years while new export business increased albeit at a slower rate than in September.

Many businesses don’t have the cashflows they need to hire new staff: “Weakness continues to lie on the employment side, as jobs decreased more quickly despite higher output,” Owen said. Employment fell for the twelfth consecutive month, with some businesses saying that they didn’t have enough money to replace workers due to lower revenues and higher expenses, and others laying off staff.

Fears of a second covid wave darkened sentiment: Employment was also hit by gloomy sentiment for the next 12 months, which hit its weakest level since May as firms feared that the economic recovery will stall if Egypt suffers a second wave of covid-19. “Growth could accelerate further if restrictions remain loose, although there are still enduring risks that may slow the recovery … firms noted that they are still struggling to raise the necessary funds to hire new staff, while also indicating weaker optimism as COVID-19 cases rise in nearby Europe,” Owen said.

Firms also reported the sixth successive increase in backlogs, “highlighting further pressure on business capacity.” They said they needed more inputs to handle the capacity constraints, resulting in the first increase in purchasing activity since December and input prices increasing at the fastest rate in 13 months.

PMI results were mixed in the GCC: Saudi Arabia’s gauge (pdf) hit an eight-month high of 51 in October (from 50.7 in September), but the UAE’s reading (pdf) fell into contraction territory amid further unemployment concerns and fears of a second spell of lockdowns. Bloomberg has more on the figures here.