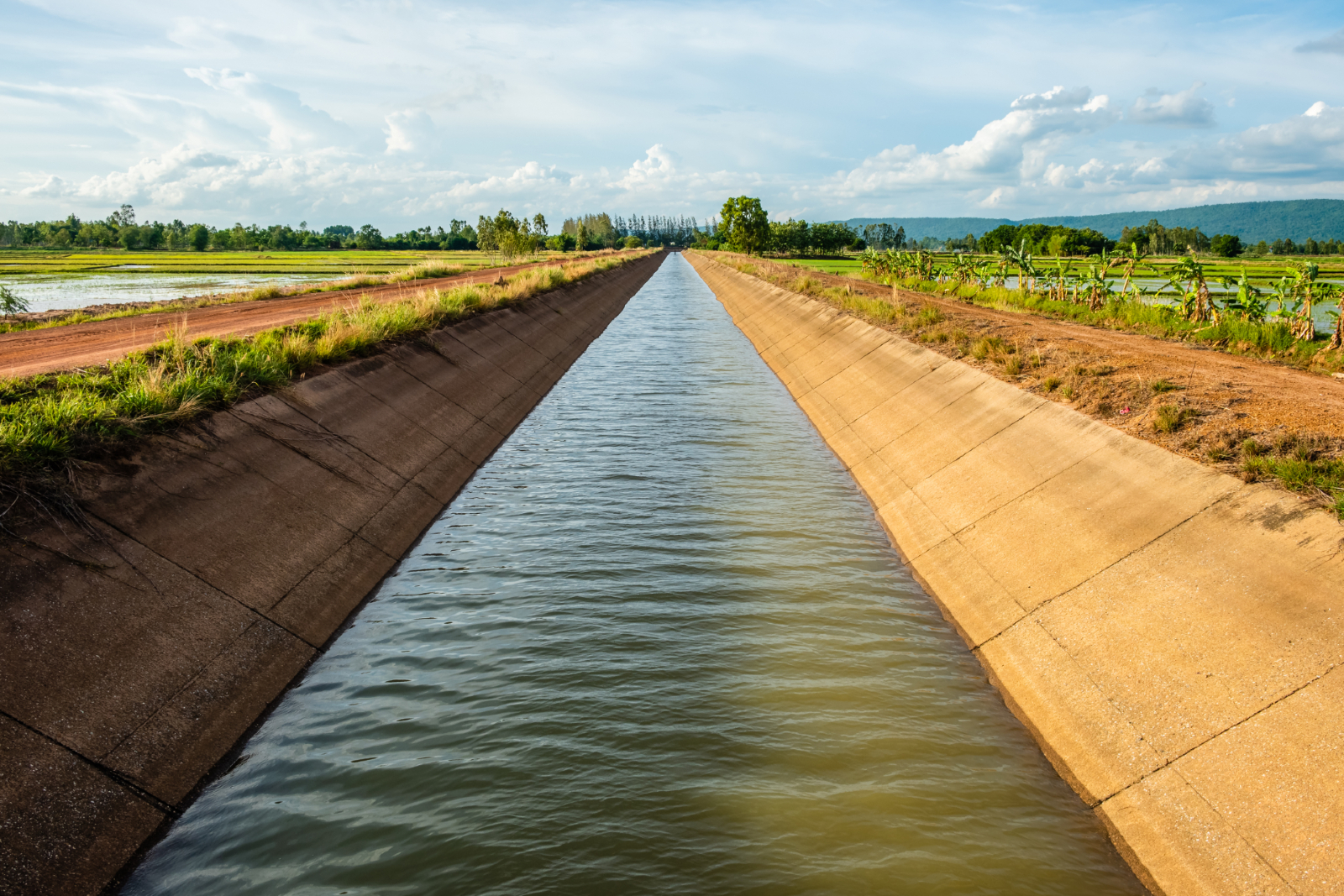 Why water leakage in agriculture could be our most pressing water infrastructure problem: Our series on our ageing water infrastructure started with a look at how Egypt loses about 29% of its drinking water because of leaks in old pipes, and illicit construction emptying the taps and putting pressure on water grids. Part 2 explored what the government would need to fix the problem and entice the private sector to get involved in upgrading our water networks. Today, we explore just how bad the leakage problem has hurt the most water intensive activity in Egypt — agriculture.

What we’ve found is that agriculture has been suffering from runoffs, seepages, and leakages thanks largely to an ancient and ailing network of canals and the continued use of outdated irrigation methods. While it is hard to quantify how much water is lost from seepage and leakage in irrigation canals, these have been significant enough that the government has launched an infrastructure campaign. Irrigation is the primary beneficiary of Egypt’s USD 50 bn water plan — a price tag that could grow to EGP 1 tn (around USD 66 bn) by 2037, President Abdel Fattah El Sisi said back in July (watch, runtime: 0:13). While we’ve explored in detail how desalination and wastewater treatment will play a role in that plan, we wanted to highlight how that plan encompasses plugging the leaking canals and moving to better forms of irrigation.

But first, a primer on what’s at stake with agriculture: Agriculture alone consumed 61.7 bn cubic meters (bcm) of water out of the 80.3 bcm of total water consumed in FY2018-19 (meaning around 77%), according to figures from state statistics agency Capmas (pdf). Research sponsored by the International Water Management Institute (pdf) and the Australian government claims the figure was as high as 85% of total water in 2016.

But even that’s not enough, as Egypt needs 100 bcm each year if it is to cultivate all 3 mn feddans of agricultural land, feed the growing population of more than 100 mn Egyptians, and still have enough left for industrial use, Abbas Sharaky, Professor of Natural Resources at Cairo University Institute of African Research and Studies tells Enterprise.

How much water is lost in our irrigation system? That exact figure is unknown, but all accounts say it could be in the bns of cubic meters. Water loss in irrigation comes primarily from leakages and evaporation. That is very hard to quantify, an Irrigation Ministry official tells Enterprise. Officials tally various estimates, but cannot point to an exact number, the official says. But estimates do exist. The Nile Delta lost 7 bcm of water in FY2018-19 due to leakages in the canals, according to Capmas. The area also reportedly lost another 2.5 bcm due to evaporation, the data shows, bringing the total tallied to around 9.5 bcm. This figure is consistent with other estimates. Egypt’s 30k km of irrigation canals are leaking 8 bcm of water, Sharaky tells us. And that figure doesn’t even account for evaporation.

Why are we losing this much water to leakages? Egypt’s agriculture — particularly in the Nile Delta — is centered around agricultural communities created in the 1960s around irrigation canals. Many of these communities have been built in reclaimed desert land, which is arid in climate (and prone to evaporation). These canals were dug directly into the ground, making them highly porous and prone to leaks, Sharaky explains. The combination of this ageing infrastructure and the continued reliance on flood irrigation, which is hard to control and prone to run-offs, contributes to the bns of cubic meters of water seeping into the ground.

What’s at stake? In the context of the impact of the Grand Ethiopian Renaissance Dam, it is estimated that a permanent drop of 5 bcm of Nile water to Egypt would cause the loss of 1 mn acres of farmland, or 12% of the country’s total, Irrigation Minister Mohammed Nasr Allam told the AP back in August.

The government is working on a multi-prong approach to tackle the problem. This consists of infrastructure works to reinforce the canals to prevent seepage, promoting the use of efficient irrigation techniques, and providing incentives to farmers to use these techniques. Using modern irrigation systems and stopping canal leakages could secure us some 5 bn cubic meters of water per year. Improving irrigation systems could also improve agricultural productivity by up to 30% and raise crop quality significantly, Irrigation Ministry spokesman Mohamed El Sibai tells Enterprise.

Plugging the canals: By decree from President El Sisi, the government is currently implementing a two-year plan to upgrade and reinforce the lining of some 7,000 kms of water canals at a cost of EGP 18 bn. 40% of the cost of the program will be covered by foreign loans and grants from multilateral organizations, El Sibai tells Enterprise. The first phase of the project is already underway, with about 3,250 km of irrigation canals due to be completed by March 2021, the project’s director Mahmoud El Saady told Enterprise. The Irrigation Ministry has so far earmarked EGP 8.4 bn to upgrade 383 canals.

The government also began a campaign to promote the use of techniques such as drip irrigation, sprinkling, and laser land leveling systems. The first phase of this plan has already started with the modernization of irrigation systems being introduced in eight governorates and 500k feddans of land.

A notable challenge to the campaign has been the reluctance of farmers to give up on outdated practices. Those growing water-intensive crops such as rice and sugarcane have been somewhat resistant to adapting modern techniques, arguing that they could impact their production, El Sebai said. Farmers believe that flooding the soil “washes it” from excess minerals, which would improve crop quality, Sharaki notes. That said, the government is working to change these misconceptions through education and guidance, and has already seen success by helping farmers increase output and quality in some areas such as Menoufia, El Sebai notes.

Financial incentives are also being presented to push things along: Implementing efficient irrigation techniques costs EGP 10-12k per feddan, El Sebai told Enterprise. To help ease this financial burden on farmers, the government signed agreements with the National Bank of Egypt, Banque Misr, and the Agricultural Bank of Egypt to provide financing for farmers. Farmers can opt into a no-interest, two-year plan or take out a loan at low interest rate that would be repaid over longer periods.

This plan to make our irrigation systems more water efficient will be implemented in tandem with the development of major infrastructure to raise our water supply. Egypt is spending some EGP 134.2 bn through 2050 to build seawater desalination plants that would provide some 6.4 mn cbm/d of water, Housing Minister Assem El Gazzar had said. The plan spans over six five-year phases, the first of which will see the government investing EGP 45 bn to build 47 desalination plants by 2025, he said. But as the price of one cubic meter of desalination plant water could reach EGP 15, according to Sharaky, it is necessary to back that up with wastewater. The ministry is investing EGP 20 bn in two water treatment plants to re-use agricultural wastewater that could provide 6.6 mn cbm/day, which would be sufficient to water 460k feddans, Housing Minister Assem El Gazzar had said.

Agriculture Act gives gov’t teeth to tackle water-intensive crops: Amendments to the Agriculture Act gave the agriculture and irrigation ministries greater powers to regulate what can be grown and where in order to clamp down on water-intensive crops. Last year, the Agriculture Ministry said it aims to increase the cultivation area of a so-called “drought rice” to 500k feddans from 150k feddans. This variety consumes 4k cbm of water per acre compared to 6k cbm needed for the traditional rice crop.