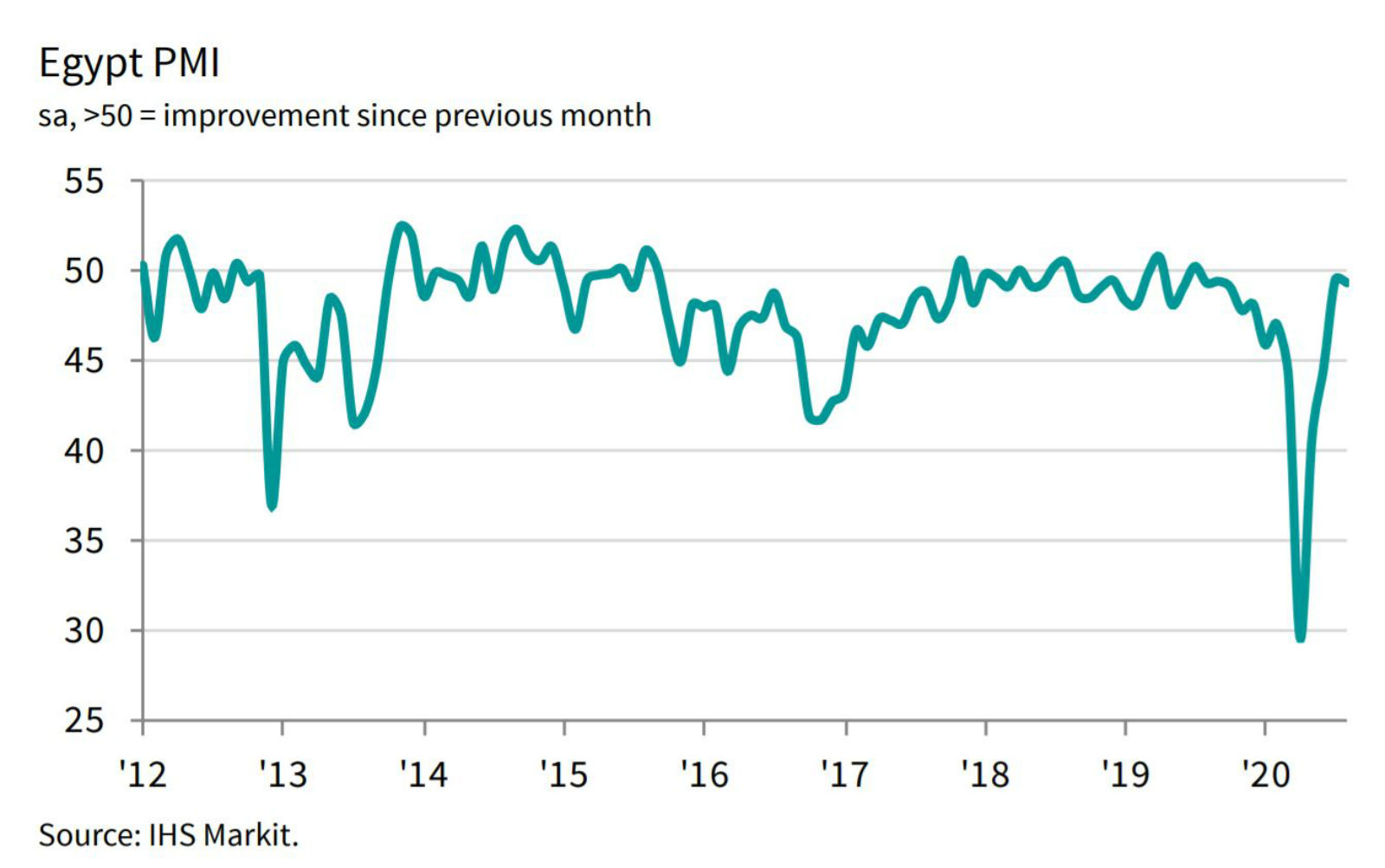 The recovery of Egypt’s non-oil private sector stalled in August despite growth in output and demand, according to IHS Markit PMI figures (pdf). The index had reached a one-year high of 49.6 in July as business conditions rebounded following the covid-19 lockdown but fell back fractionally to 49.4 last month amid continued job losses, IHS Markit said. A reading above 50.0 indicates expansion and below, contraction.

Output, demand rise for the second month running: Output and new orders rose for the second consecutive month in August, albeit at a slightly weaker rate than July. Some businesses told the survey that demand has yet to return to pre-covid levels and that sales continue to underperform. “This suggests that many firms are still finding business conditions though, despite the relaxation of many covid-19 related restrictions,” said David Owen, economist at IHS Markit.

But tourism was a bright spot: Tourism and hospitality also seem to have picked up more steam in August, with foreign customer demand rising at its quickest pace in nearly three years, in part due to the reopening of tourist sites which increased visitor numbers to Egypt.

Employment drops for 10th consecutive month: August saw a “solid” drop in employment as companies cut jobs due to low workloads, dragging the headline index down. This was the 10th straight month of job losses. “Consumer demand remains weak, with new business picking up at only tentative rates in both July and August. As a result, employment levels were not sustained,” said Owen.

Output prices rose for the first time in 10 months, as input costs continued to rise. Higher price tags for medical equipment and disinfectants were drivers of the overall rise in input prices. Despite this, inflation slowed slightly from July but remained “solid.” Wage costs grew at their quickest rate in six month, but only “mildly.”

The amount of outstanding work increased for the fourth successive month, driven by job cuts, import delays and liquidity problems at some companies.

Sentiment takes a hit: Sentiment on output over the coming 12 month was down “considerably” from July’s 29-month high, hitting its lowest level since May. This caused firms to further reduce purchases, Owen said. A higher proportion of companies, however, still see things improving, hoping that the worst of the pandemic is now over.