Dow has best day since 1933 as US, European markets soar on Fed bond buying and prospect of massive US bailout 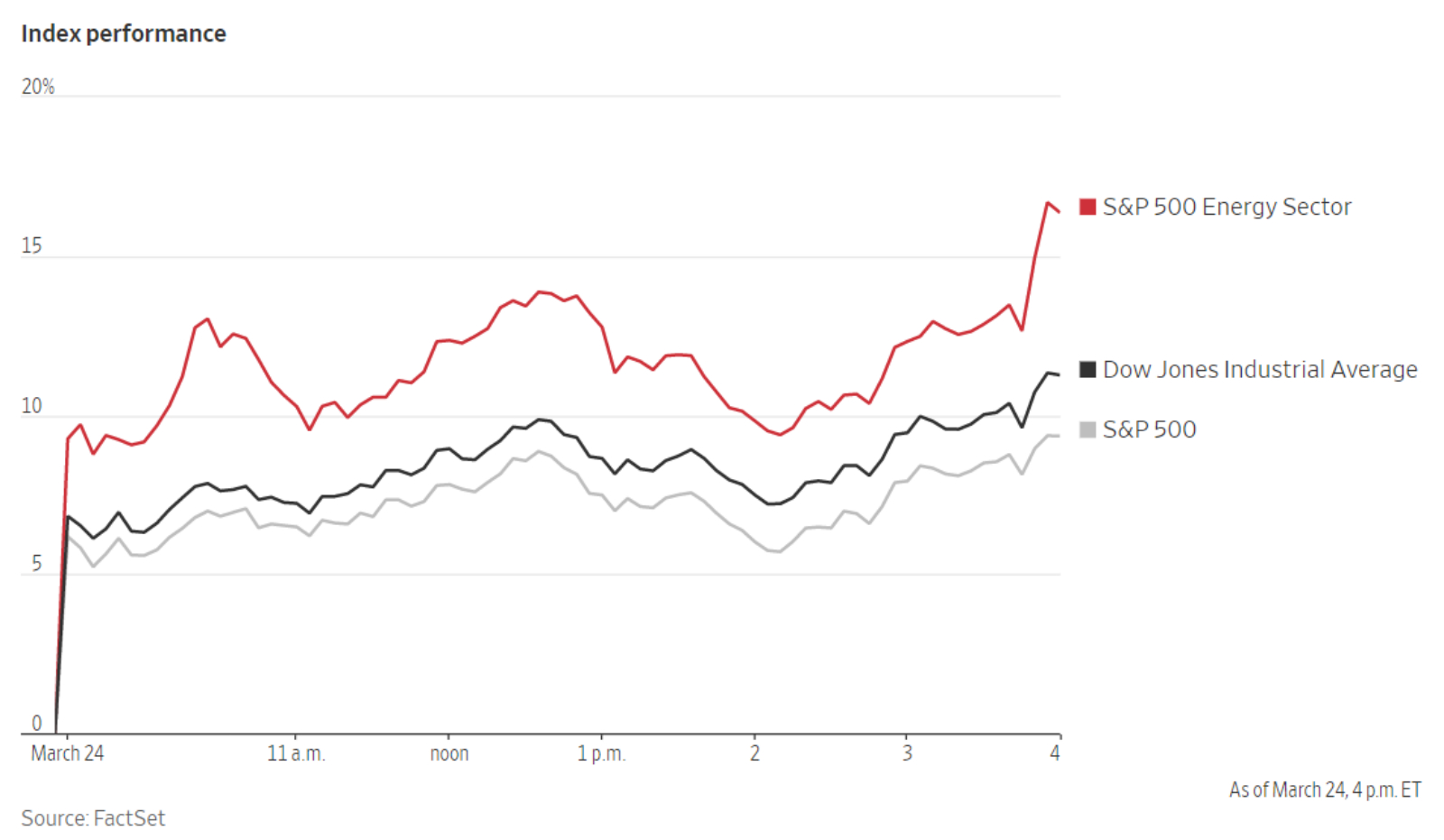 Dow has best day since 1933 as US, European markets soar on Fed bond buying and prospect of massive US bailout: Global stock markets soared yesterday as investors shrugged off dire economic data and regained confidence on a mammoth stimulus package from the Federal Reserve and hopes that US lawmakers would soon agree a USD 2 tn economic rescue plan. We have more on yesterday’s data releases in this morning’s Macro Picture, below.

US stocks collectively saw their biggest single-day gains since October 2008: The S&P 500 was up 9.38% at the closing bell yesterday while the Dow Jones surged at a rate not seen since 1933, finishing the day 11.37% in the green.

So how does today look? Asian markets are soaring as we trudge toward dispatch time this morning, but futures now point to slightly lower opens for the Dow, S&P and Nasdaq, while Europe looks mixed.

One JPMorgan strategist is calling the return to a bull market already: Top JPMorgan strategist Marko Kolanovic has predicted that the US economy will rebound in a “number of weeks” causing stocks to surge 40% and return to record highs by the beginning of 2021, CNBC says. We want some of whatever Marko had with his breakfast / ingested before talking to CNBC. Make it a double.

Gains in the oil market were more muted: A rally Brent and WTI prices faltered in late trading after posting strong gains early in the session as the slump in demand continued to spook investors. Both crude benchmarks were up more than 5% before falling back, with WTI up 2.8% at USD 24.01/bbl and Brent 0.4% higher at USD 27.14/bbl. Reuters has more. 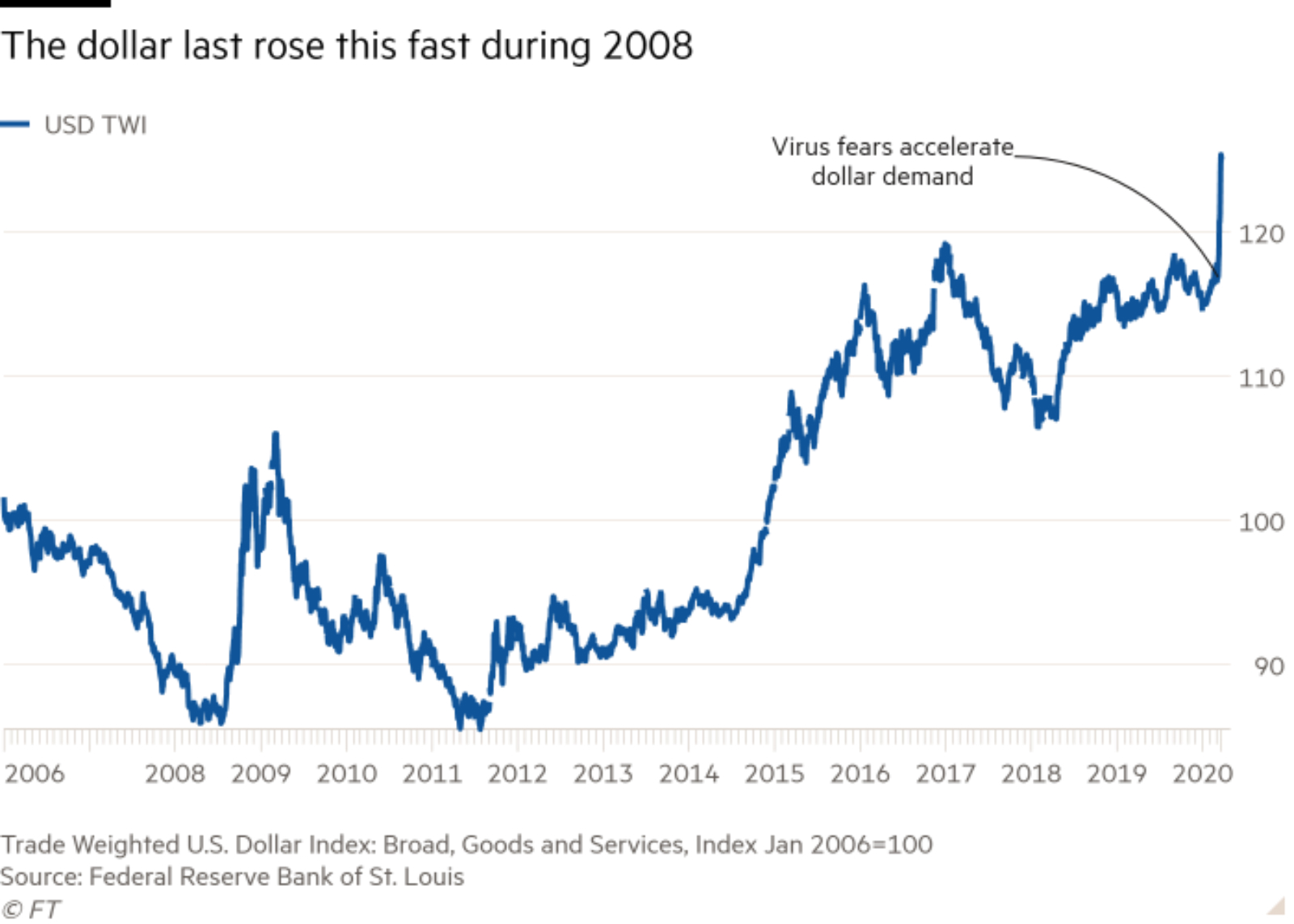 Pressure on the USD is easing after Fed’s ‘QE unlimited’: The massive shot of liquidity announced by the Federal Reserve two days ago seems, for the moment at least, to be doing the trick. A buying frenzy by fearful investors and businesses caused the greenback to surge almost 9% in 11 days, threatening to drain liquidity and freeze the funding markets. But the Fed’s pledge to buy unlimited amounts of government and mortgage-backed securities brought an end to the rally yesterday, which saw at one point the USD index fall back to its lowest point since 19 March, Reuters reports.

Goldman predicts direct intervention if the rally continues: “Should USD appreciation continue, we would see a reasonably strong case for targeted intervention, and think there is a rising probability that authorities will take this step,” Zach Pandl, currency analyst at Goldman Sachs, wrote in a note on Monday, according to the FT. “If swap lines and [bond purchases] prove insufficient, we think Fed and Treasury should and will consider traditional FX intervention to stabilise the USD.”

But the Fed hasn’t halted the corporate bond sell-off: Yields on corporate bonds are continuing to climb despite the Fed announcing that it would for the first time in history start buying investment-grade corporate debt, the FT reports. Corporate bond ETFs and derivatives have responded well to the measures but the prices of cash bonds have continued to fall — a trend that is now being caused more by poor trading conditions than fears over the economy, investors have said.