The results of our Enterprise 2018 reader poll 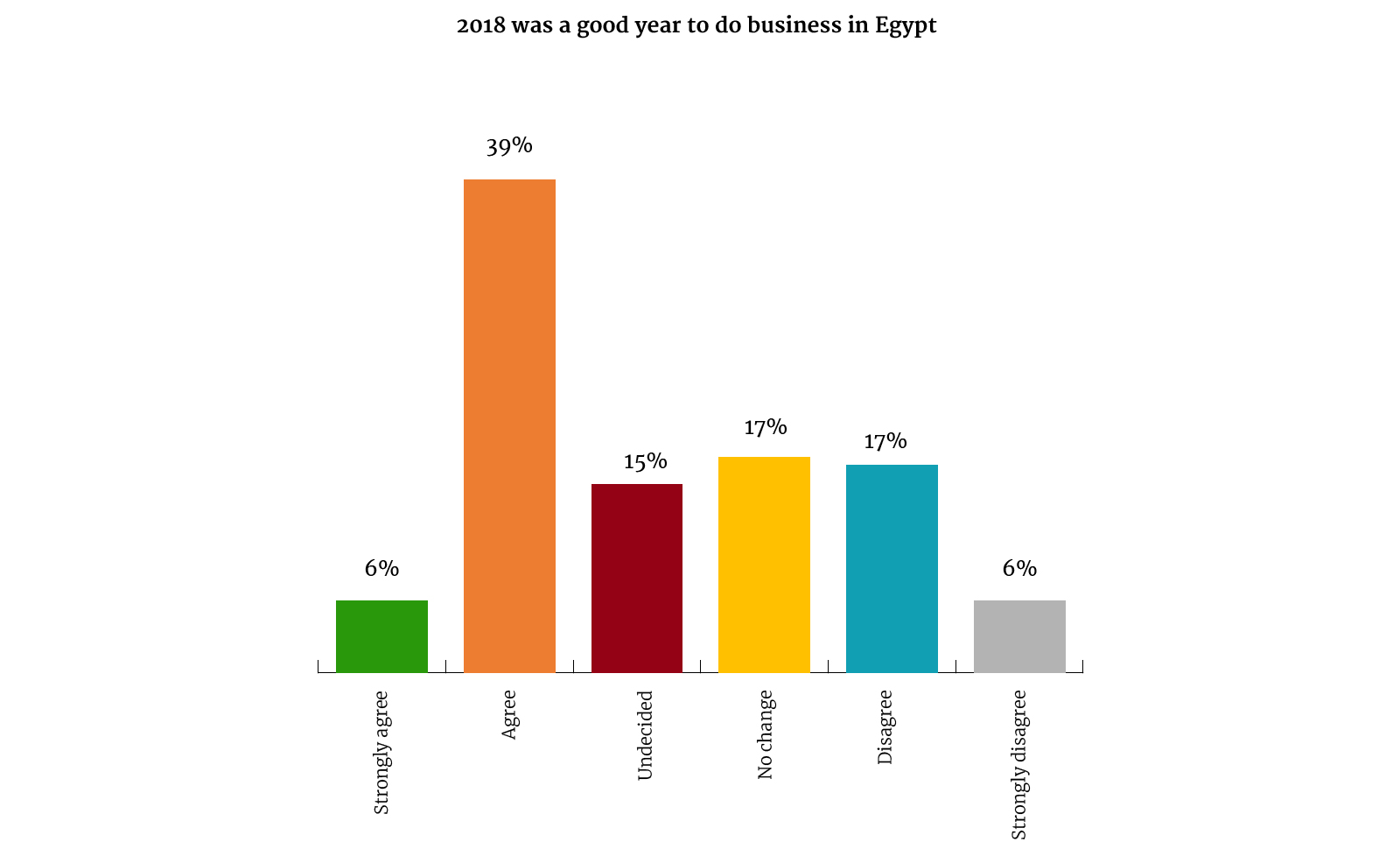 The results are in: 2018 was (mostly) a good year in which to do business in Egypt — and you’re cautiously optimistic that 2019 is going to be better, the results of our end of year 2019 survey showed. 46% of the hundreds of readers who participated earlier this month in our 2019 Enterprise Reader Survey said that 2018 was good for business. While the results found you are mostly positive 2018, they fell below last year’s survey results: 63% of respondents reported 2017 was good for business, and 83% poll takers at the time having said they expected business conditions would improve this year.

Half of all respondents think that business conditions will improve in 2019, while 16% on the other hand expect conditions to deteriorate — more than double the number of pessimists in last year’s survey.

And fewer of you expect more foreign investment coming into your industry: 44% of you see fresh FDI in the cards for 2019, against the 65% of you who expected that foreigners would commit new capital in the year now ending.

So what’s dampening the optimism that pervaded in 2017? All the usual suspects were high on our readers’ minds, from inflation to high interest rates, the challenge of finding top talent and government regulation. The two most pressing challenges were inflation (27%) and high interest rates (19%), effectively unchanged from their relative rankings in last year’s poll. And don’t expect much a reprieve: The CBE looks on track to cut interest rates very slowly indeed as it looks to stem outflows from state debt in the new year.

Interest rates are a major problem for business: 64% of readers see the current interest rate environment as either somewhat or very negatively affecting business, on par with last year. The overwhelming majority of you see interest rates coming down some time in 2019, but 29% of readers see no change in the cards. 48% see rates falling sometime in second or third quarter of next year.

Add this all up, and you seem at risk of putting investment plans on hold: This time last year, 62% of you were certain your companies would increase their investments in Egypt over the following six months. Today, only 44% of you are saying the same.

One issue that appears to be going well is FX. Respondents who felt that access to FX was their biggest problem dropped to 5% in this year’s survey from 10% in last year’s survey. Learning how to operate in an environment where the open market sets the rate also fell marginally as the leading obstacle to business, with only 2% of readers this year saying that it was their most pressing problem.

You expect the EGP to slide a little bit: The majority of respondents see the EGP losing ground against the greenback, but not much. Only 3% see the EGP as holding the same rate compared to the EGP or even appreciating, while 66% see the official exchange rate on 1 July 2019 to be between EGP 17.51 and EGP 19.50.

Fewer of you see your companies adding to their payrolls this year than thought the same a year ago. 48% agree or strongly agree that their companies will hire for new positions in 2019, down from 58% in last year’s poll.

You’re really hoping to keep wage growth under control after two years of very hefty raises. Most companies are hoping to get away with salary increases of 15% of less, and of the companies that have already announced raises, the average wage rise has been around 15%.

The cabinet economic group is getting a lower score this year than at the end of 2017. Some 46% of respondents do not think the group understands or is sympathetic to the needs of business — up from 37% of felt the same at this time last year. Our survey doesn’t get into the reasons why: The downturn in sentiment could have to do with ongoing friction at the regulatory level, it could be reform fatigue in the business community, or maybe y’all were cranky and undercaffeinated when you took the survey.

If you were going to start a new business this year, you’d make a play on our nation’s love of food. The overwhelming majority of polltakers said that if they were looking to start new businesses this year, it would likely be in the food sector, reflecting a general expectation that consumer goods will see an uptick in 2019. Export-oriented businesses were also high up there.

We were really humbled by all the kind messages of support so many of you left us in your comments. The really made our year. We really love you. We also enjoyed reading all of your expectations, concerns, and comments regarding the progress of the Egyptian economy as well as the suggestions on how to improve our service.