The Central Bank of Egypt has finally received the final USD 2 bn tranche of the IMF’s USD 12 bn extended fund facility, Finance Minister Mohamed Maait told Youm7. The IMF’s Executive Board agreed to disburse the tranche in July after a staff-level agreement was reached in May.

We’re still not totally sure what kind of post-program arrangement the government is pursuing with the IMF: Maait mentioned in June that the ministry is in talks with the fund over a possible two-year, non-loan program, but other than that we remain none the wiser about how the government intends to continue with economic reform.

The CBE and Capmas are due to release July’s inflation figures sometime this week. Inflation unexpectedly plummeted almost five percentage points to 9.4% in June — the first time Egypt has seen single digit inflation since March 2016.

CI Capital sees inflation dipping below 10%: An “unprecedented oversupply” of several products in the market, particularly fruits and vegetables, should keep July’s inflation in check, CI Capital wrote in a research note yesterday. The most recent fuel price hike, “which came in at 24% this year vs. 50% in 2018,” coupled with the continued appreciation of the EGP and other factors, “continue to give us high conviction of our forecast that headline inflation should come below the 10% mark for July which we expect to be released in the coming days.”

Lower inflation could give the CBE room for two rate cuts: The investment bank sees the CBE’s Monetary Policy Committee cutting interest rates by 100 bps at each of its next two meetings, which it says are “the two safe windows” for the CBE to begin its monetary easing “and assess the impact of the cuts on the economy.”

Also coming up this week: The CBE is due to release Egypt’s net foreign reserve figures for July. 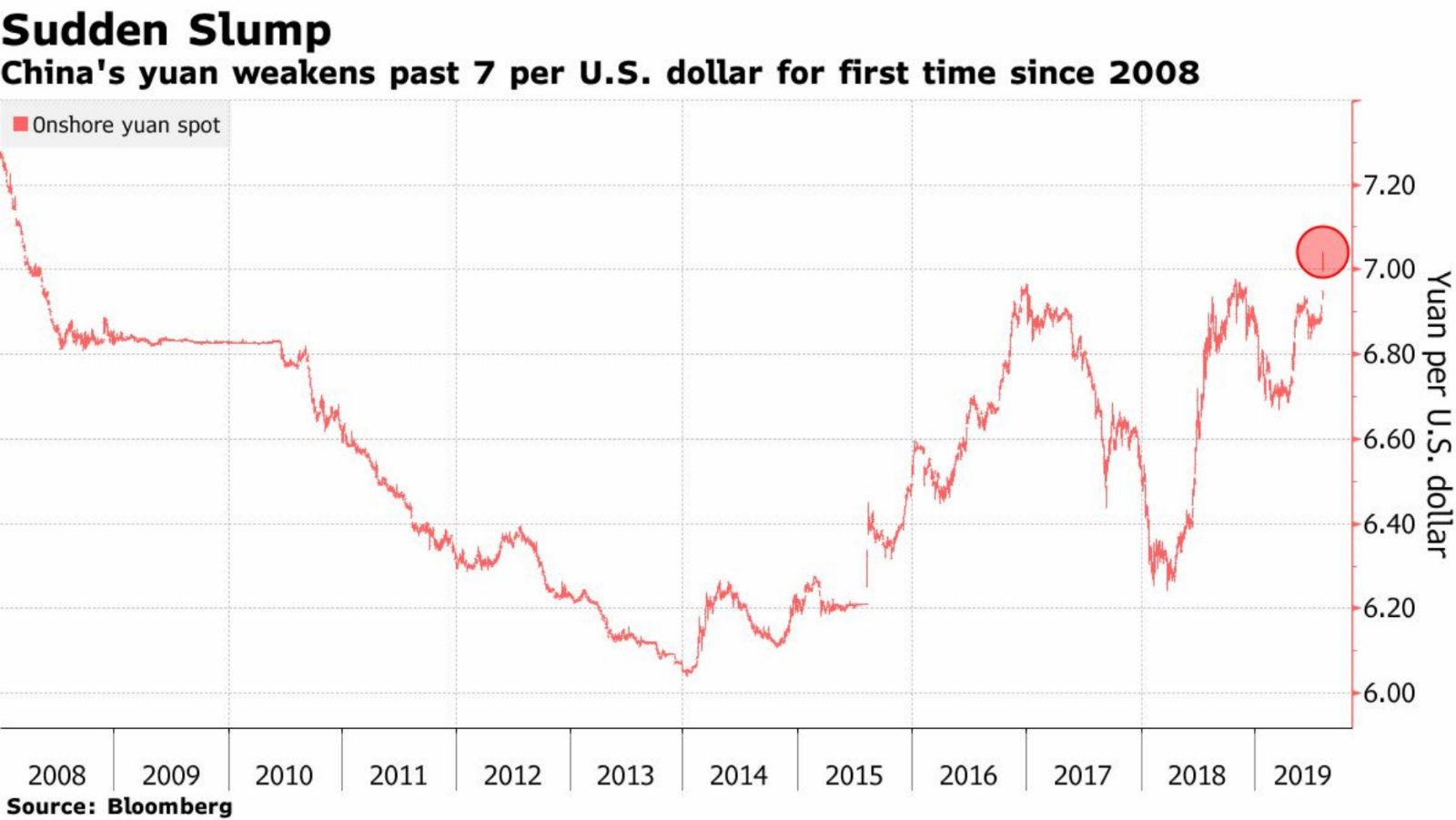 China devalues the yuan, fires opening shot in currency war: China launched a sharp devaluation of its currency yesterday after the central bank allowed it to trade below 7 against the USD for the first time in 11 years, Bloomberg reports. The offshore CNH fell 1.9% to hit a record 7.08/USD, while the onshore CNY sank 1.3% to reach 7.03/USD — lows not seen since the 2008 financial crisis.

China insists it’s playing fair: The drop came after the People’s Bank of China (PBOC) cut its daily reference rate below 6.9 for the first time in eight months. Bank governor Yi Gang insisted that it had not strategically devalued the currency. “This fluctuation is driven and determined by the market,” CNBC quoted him as saying.

Analysts aren’t buying it: “On a scale of 1-10, it’s an 11,” Cowen analyst Chris Krueger said of China’s “massive” retaliatory measures. Meanwhile, Hong Kong-based analyst Andrew Collier framed the devaluation in militaristic terms. “If the currency does stay below 7 for another day, that is a sign that Beijing has ‘weaponized’ the RMB as a tool to improve exports during the trade war,” he told the New York Times.

All eyes on Trump’s Twitter feed: The question of whether this situation escalates into a full-blown currency war all depends on Trump’s reaction. And reading into a bullish late-afternoon Tweetstorm yesterday, a USD intervention may well be an option on the table. “China has always used currency manipulation to steal our businesses and factories, hurt our jobs, depress our workers’ wages and harm our farmers’ prices. Not anymore!” he wrote. 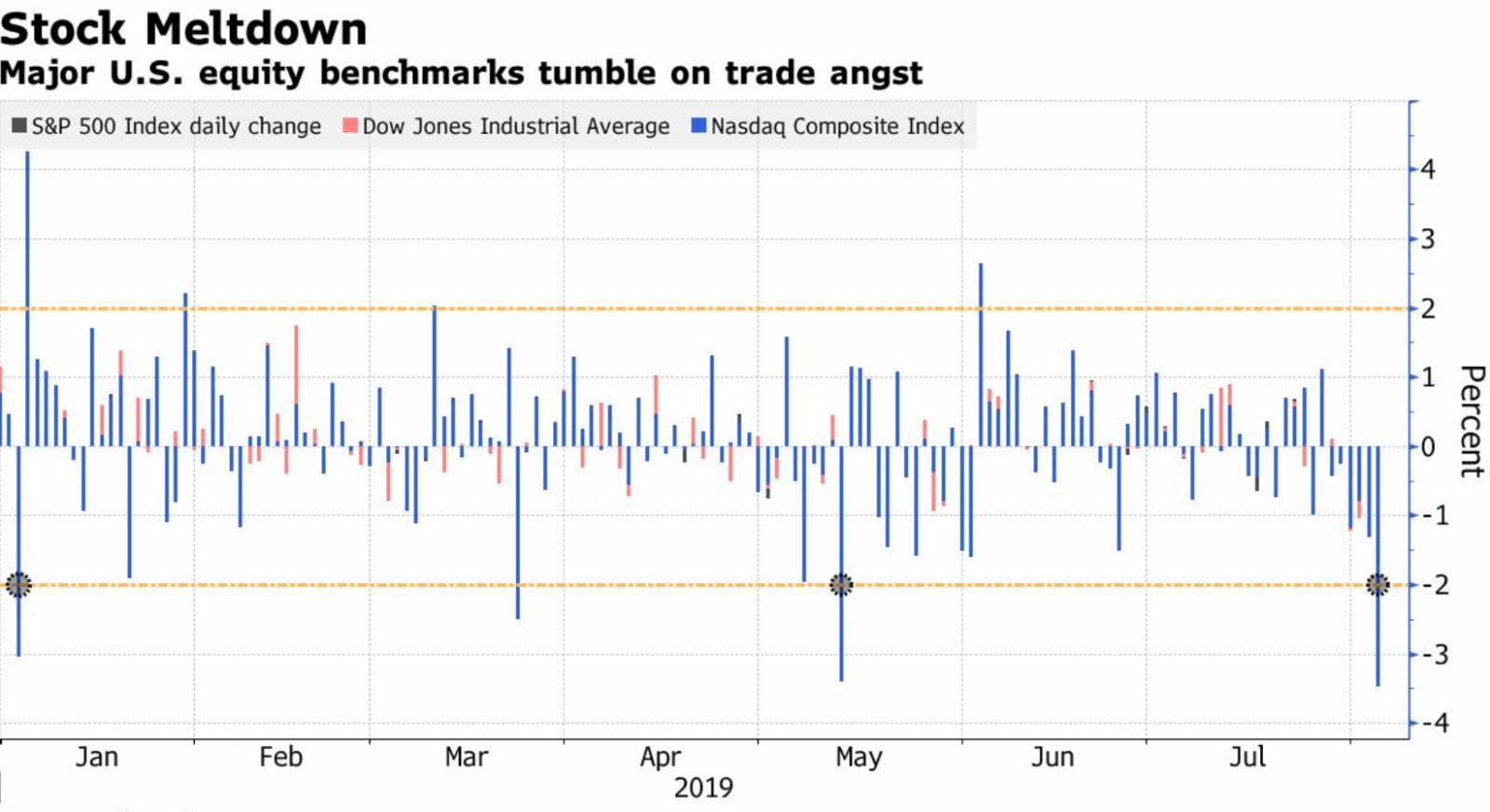 It’s a sea of red in the global markets: Markets once again suffered heavy losses yesterday after the RMB devaluation increased fears of a rapidly escalating trade conflict. US equities lost more than USD 700 bn, as the S&P 500 suffered its worst day of trading in 2019. Investors piled into safe haven assets, causing the yield on US 10-year Treasuries to fall 13 bps to 1.714% and 10-year German bund yields to plumb new depths of -0.52%. Asian indices were all heavily in the red early this morning. (Bloomberg | AP)

The Wall Street Journal is probably regretting publishing this: Emerging markets saw the biggest daily losses of 2019 on Friday as investors fled fixed-income assets and equities in the face of rising trade tensions. Data from the Institute of International Finance seen by Reuters shows that USD 2.33 bn was pulled from EM assets as investors reacted to Trump’s China tariff announcement.

And Citi is telling people to get out of EMs: Citi’s head of CEEMEA strategy, Luis Costa, is recommending that investors short high-yielding EM assets in response to the RMB devaluation, Reuters says.

Abu Dhabi Financial Group and Dubai-listed Shuaa Capital have finalized their merger after receiving the necessary regulatory approvals, according to a joint statement (pdf). The merger created an entity with some USD 12.8 bn in combined assets under management, and saw the “admission of 1.47 bn new shares on the Dubai Financial Market in favour of ADFG’s parent company and strategic investor in Shuaa, Abu Dhabi Capital Management LLC.”

HSBC ousts CEO, announces 4,000 job cuts: HSBC’s board has fired CEO John Flint after just 18 months in the job over concerns that cost-cutting strategies were not being implemented quickly enough. The board is keen to reduce its salary costs in response to the slowing global economy, but reportedly became frustrated with the lack of action during Flint’s tenure. The bank immediately announced plans to cut more than 4,000 jobs — including many senior positions — following his dismissal. The FT and Bloomberg have more. 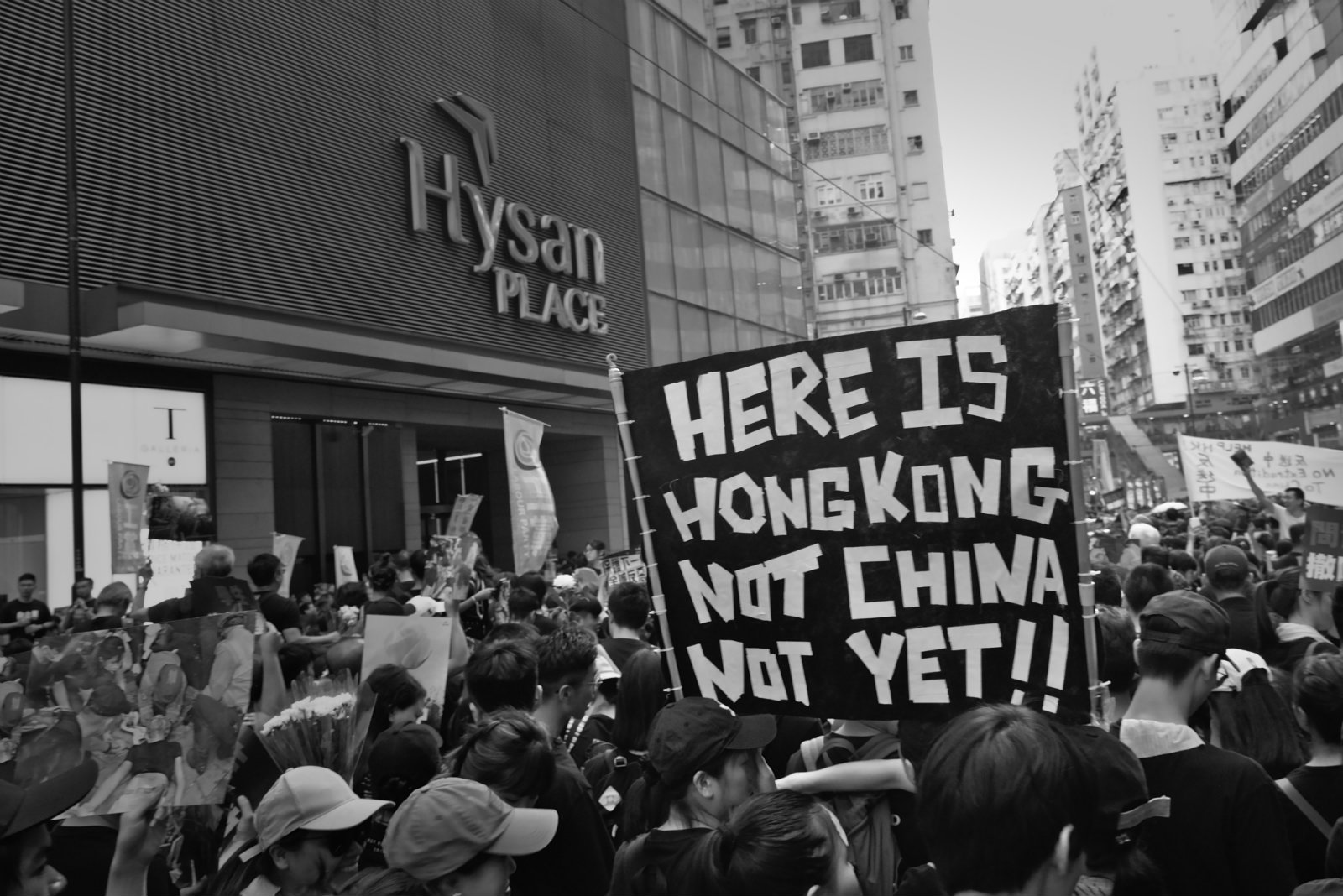 Strikes, protests paralyse Hong Kong: Protesters brought much of Hong Kong to a standstill yesterday after calls for a general strike led to the cancellation of more than 200 flights and the suspension of train services. Riot police fought pitched battles with demonstrators, who blocked roads and attempted to set a police station on fire. Embattled Hong Kong leader Carrie Lam said that the territory was “on the verge of a very dangerous situation.” Protests have been ongoing since 9 June after the government proposed legislation that would have enabled citizens to be extradited to China to face trial. The BBC has more.

The US is reeling from the two mass shootings in El Paso and Ohio, which were the 21st and 22nd such shootings this year. The shootings killed a total of 29 and injured about 50 people, the AP reports.