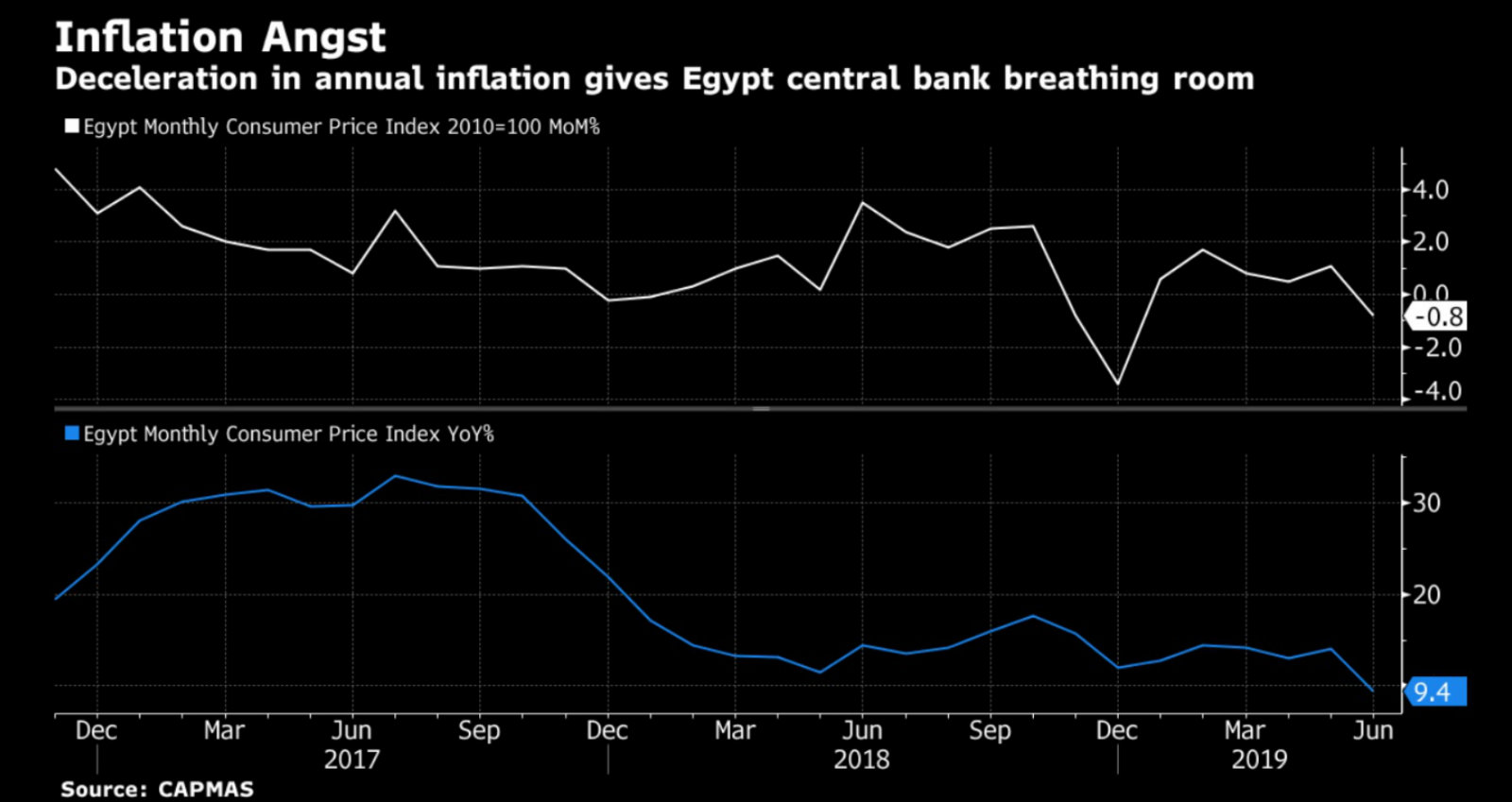 Inflation hits lowest levels in over three years, but mind the subsidy cuts in next month’s reading: Egypt’s annual headline urban inflation rate dropped to 9.4% in June from 14.1% in May, the first time the reading has come in single digits since March 2016, the CBE said (pdf) in a statement on Wednesday. Capmas attributed the drop to a 2.2% month-on-month decline in food prices. The drop follows a surprisingly uptick in headline inflation the previous month to 15.1% from 13% in April, following a downward trend which began in February. Annual core inflation came at 6.4%, down from 7.8% in May, said the CBE. Bloomberg and Reuters also have the story.

Base effect could explain the drop: “The drop is a result of a favorable base effect of 2018, which saw energy prices go up in June by 50%, followed by a pickup in inflation, whereas this June saw no fiscal measures,” said CI Capital economist Noaman Khalid.

The new figures have pushed analysts to lower their projections for inflation this year. “We revised downward our inflation rates for 2H2019, expecting an average reading of 8.8% (versus our earlier estimate of 13.8%) only on the back of adjusted calculations following the new low figure registered in June,” Beltone Financial said. Pharos Holding has also revised its inflation forecasts for July, August, and September to 9.9%, 10.8%, and 9%, respectively, said Radwa El Swaify, head of research at the investment bank. Shuaa Securities also said it saw July inflation coming at lower than 14.5%, as previously expected, but preferred not to give out a specific range. “We’re looking for 10-11% in July and August, single-digits from September to November before ending the year at 10-12%,” said EFG Hermes’ Mohamed Abu Basha.

Good news for carry traders: The lower inflation rate increases the real yield in investment, which could help maintain a healthy appetite in the treasury market, CI Capital’s Khalid says. Foreign holdings in Egyptian treasury bonds have been recovering since the beginning of this year, rising to around USD 18.7 bn as of June.

REVISED INTEREST RATE POLL- Despite the drop, the CBE is still widely expected to hold its key interest rates in its MPC meeting later today in light of the government raising fuel prices between 16% and 30% earlier this month and new electricity subsidy cuts coming into effect. Four of the nine economists we polled earlier this week maintained their prediction that the CBE to keep the overnight deposit and lending rates at 15.75% and 16.75%, respectively. Even those who see a high chance of a rate cut still think the CBE will prioritize the impact of the subsidy cuts. “Falling inflation, coupled with the dovish shift among central banks around the globe, increases the chances of an interest rate cut. But we think that the CBE will want to assess the impact of electricity and fuel price hikes that took effect this month,” Capital Economics said in a note yesterday.

Pharos Holding has revised its position, expecting the CBE to cut the rates by 100 bps in today’s meeting. With the high demand from foreign investors for EGP treasuries, the strengthening of the EGP, and the newly revised projections for inflation this year, analysts at Pharos believe that the environment is ripe for an interest rate cut.

Naeem Brokerage’s Allen Sandeep also maintained his position that the CBE will ease monetary policy by cutting rates by 100 bps today, telling Enterprise yesterday that the new inflation figures only confirmed his forecast. “For the months of July and August, we expect the monthly inflation rate to rise on account of the latest round of energy subsidy cuts; however, with the price hikes (in percentage terms) being well below 2018 levels, the uptick in inflation should be relatively muted, leaving some room for monetary easing,” Naeem said in a note yesterday.

If not now, then when? Shuaa Securities’ Esraa Ahmed said she expected a cut in August or September — instead of November as previously forecasted — should the July figures rise at a moderate level. Other analysts have told Enterprise that they also saw cuts coming earlier than initially expected, but preferred not to say when just yet.