THIS MORNING: It’s Science Day at COP27 + the crypto markets are tanking this morning

Good morning, friends, and welcome to the final workday of the week — at least for those of you who are not in Sharm, where tomorrow is not the weekend, but instead decarbonization day. Have heart: COP27 takes a mandatory one-day break on Sunday.

It’s another big day of business news: We’ve now announced 28 GW of new renewable energy generation capacity, have lined up bns of other green investment, and finance day saw the EGX announce a new continental carbon market. We have all of this and more in this morning’s news well — and you can check out additional coverage in Enterprise Climate to get more of the regional flavor.

Day five of COP27 is Science Day, where sessions will be focusing on advances in climate science and the impacts of climate change on ecosystems, biodiversity, and global communities in a bid to ensure actionable steps are based on credible science. Youth & Future Generations Day will be happening at the same time, bringing high-level policymakers together with representatives of the Conference of Youth to present the “global youth statement.”

THIS WEEKEND- Friday is decarbonization day, and Saturday is adaptation and agriculture day.

MEANWHILE- World leaders in Sharm are continuing to press for the release of imprisoned rights activist Alaa Abdel Fattah, who said on Sunday he would stop drinking water. US President Joe Biden is expected to bring up Abdel Fattah’s case when he arrives in Sharm tomorrow. The issue dominates the conversation on Egypt in the foreign press, as we note in this morning’s Egypt in the News. Also below: The nation’s talk show hosts are also covering the story as our ambassador to the UN pushes back on the subject and Foreign Minister Sameh Shoukry hit the airwaves last night.

AND- World leaders continue to talk behind the scenes about the shape of an agreement or communique at the end of the summit. Don’t expect to hear anything until the final day of the gathering.

PLAY WITH THIS- Climate Trace is a new interactive tool that zeroes in on the estimated emissions of the world’s top 70k-or-so polluters, including airports, plants and refineries in our part of the world.

IN MEMORIAM- GB Auto’s Raouf Ghabbour passed away yesterday at age 69 after a long battle with cancer.

Raouf was one of the good guys. A leading figure in our community, he became CEO in 1985 of a decades-old family business, growing it and taking it public in a landmark IPO. Raouf went on to transform the business a second time, taking it outside the nation’s borders and turning it into a pioneer of Egypt’s now-booming non-bank financial services industry. The business’ GB Capital unit has become a business that’s even more compelling than the core automotive unit.

He was smart, hilarious, and profane — and thoughtful, kind, and one hell of a strategist. Raouf was a guy who reveled in the intricacies of the distribution and retail industries, but who built a world-class assembly and manufacturing business and prided himself in creating meaningful jobs that made a lasting contribution to the nation’s economic development.

Raouf Ghabbour was a patriot in the best sense of the word. He thought critically about a country he loved and — in his own, colorful way — was never shy about making sure everyone knew where we were doing well, and where we could do better. We’ll miss you, Doc.

EGX WATCH- The EGX30 jumped 4.6% yesterday, a day after Fitch’s decision to cut Egypt’s credit outlook to negative sent the benchmark index down 1.5%. Yesterday’s trading session — the best since the central bank announced the EGP float last month — came on the same day as the Qatari sovereign wealth fund deposited another USD 1 bn at the Central Bank of Egypt while it continues to negotiate acquiring stakes in several Egyptian companies. We have more on this in this morning’s news well, below.

EGP WATCH- The EGP was stable against the greenback yesterday, closing at 24.4344 compared to 24.4153 on Tuesday, according to central bank figures.

US inflation figures for October are out today and traders will be hoping for a positive release that could keep the Federal Reserve from making its fifth-consecutive 75-bps interest rate hike next month. Despite the Fed embarking on its most aggressive tightening cycle in years, inflation has fallen back only slightly from 40-year highs in June. Analysts are forecasting prices to have cooled slightly y-o-y in October but still expect inflation to remain elevated, potentially meaning another huge rate hike in December, according to Bloomberg.

Five to seven agreements will be signed with companies to export renewable energy at the SCZone, Planning Minister Hala El Said told Bloomberg Asharq (watch, runtime: 1:36). The SCZone has long been expected to sign agreements with international companies to establish green hydrogen and ammonia plants at COP27. Initial agreements worth bns of USD have been signed this year, the most recent of which was with Maersk for a huge USD 15 bn facility capable of producing 3 mn tons of fuel a year.

Taqa Arabia IPO next year? Wait and see. An EGX debut for Qalaa Holding subsidiary Taqa Arabia next year will depend on market conditions, Chairman Ahmed Heikal told CNBC Arabia yesterday (watch, runtime: 7:00). “Market conditions are unstable. We have an agreement with shareholders to offer Taqa Arabia on the EGX next year, but this would depend on global and local conditions and other factors,” he said. 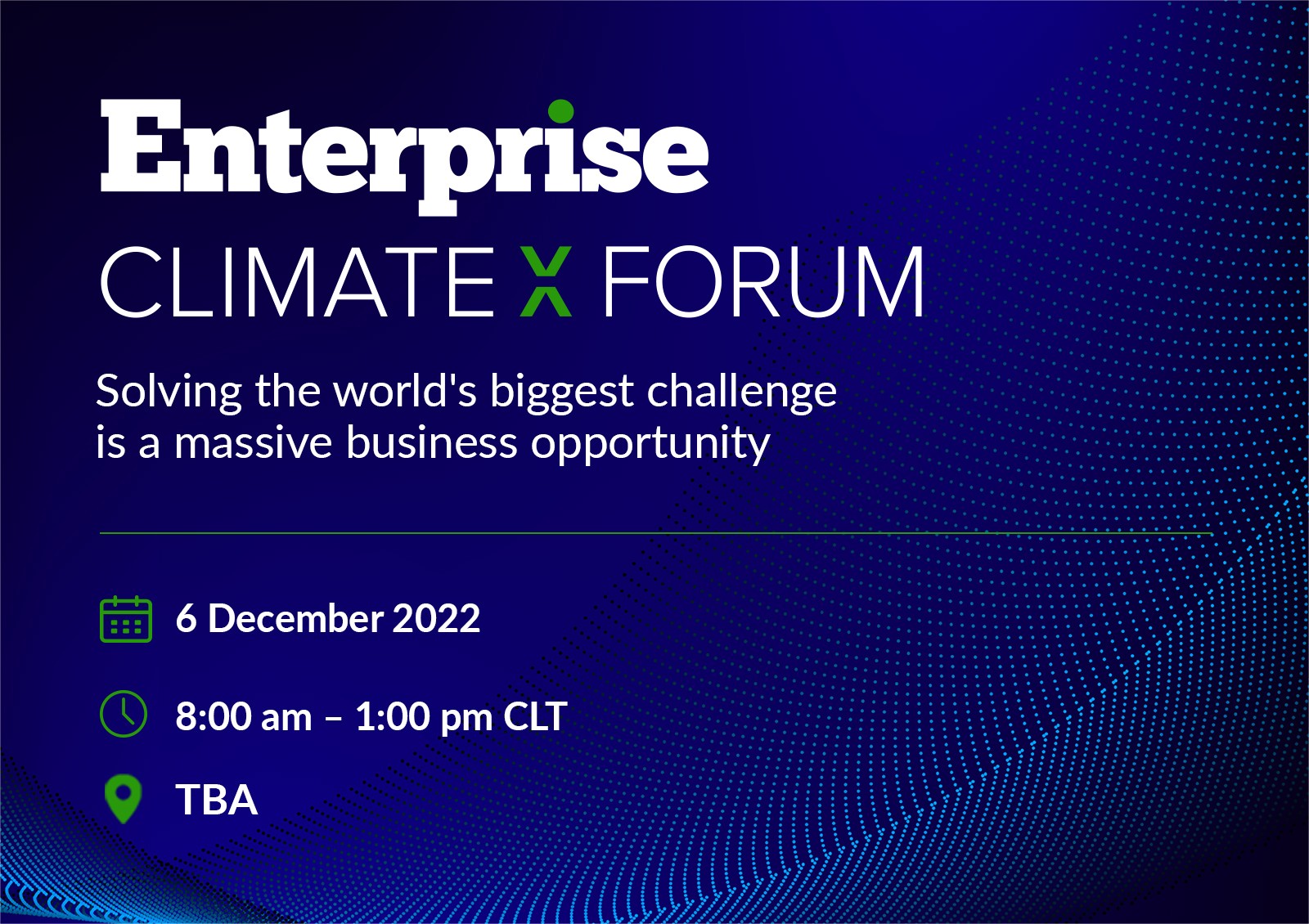 The Enterprise Climate X Forum, our first industry-specific conference, is taking place on Tuesday, 6 December. The Enterprise Climate X Forum will give insiders and newcomers alike the chance to talk about how to build a climate-centered business — and how to make sure your business continues to have access to the funds it needs to grow. Expect it to be heavy on lessons learned in Egypt and other global growth markets — and lots of success stories.

Stay tuned very soon when we reveal the venue. You’ll love it, we promise.

DO YOU WANT TO ATTEND? The first wave of invites is going out today. If you’re a C-suite exec, business owner, climate professional, DFI staff, investor or banker, please email us at climatexrsvp@enterprisemea.com to signal your interest, letting us know your name, title and where you work.

The big story in the business press: Crypto is melting down. Crypto continued to plunge for a second consecutive day after the world’s world’s largest crypto exchange, Binance, abandoned plans to acquire FTX yesterday, saying that the firm’s issues were “beyond our control or ability to help”, CNN reported. Binance walking away from the deal has been brutal, pushing BTC down by nearly 13% to trade below USD 16k, its lowest in two years. ETH was down by nearly 13% to USD 1.1k. The collapse of the deal is leading on Bloomberg, CNBC and the Financial Times, and is getting prominent coverage on the Wall Street Journal.

The backstory: The latest volatility was triggered when Binance founder Changpeng Zhao helped to trigger a bank run against his rival, the head of the world’s third-largest crypto exchange, FTX. The outflows that followed has left the company on the verge of collapse, triggering fears of a new wave of bankruptcies in the crypto sector.

The final results of the US midterms aren’t yet in but it’s clear the vote didn’t go quite how Republicans had hoped: Predictions for a so-called “Red Wave” have failed to transpire, with the GOP looking like it will only take a marginal majority in the House of Representatives and the Senate race still too close to call. Republicans so far have 49 seats to the Democrats’ 48, with key contests in Arizona and Nevada still to be called. The Senate race in Georgia is so close it’s going to a run-off vote, potentially leaving the Senate race up in the air until next month. Get the latest on the results: AP | NYT | Washington Post.

Russia has suffered a major setback in its war in Ukraine after generals announced yesterday that they would pull its troops out of Kherson, saying they are unable to keep supply lines open. Kherson fell in the early days of the war and remains one of the only major cities captured by Russian forces. The retreat is getting ink from Bloomberg, the Financial Times, the New York Times, the Guardian and others.