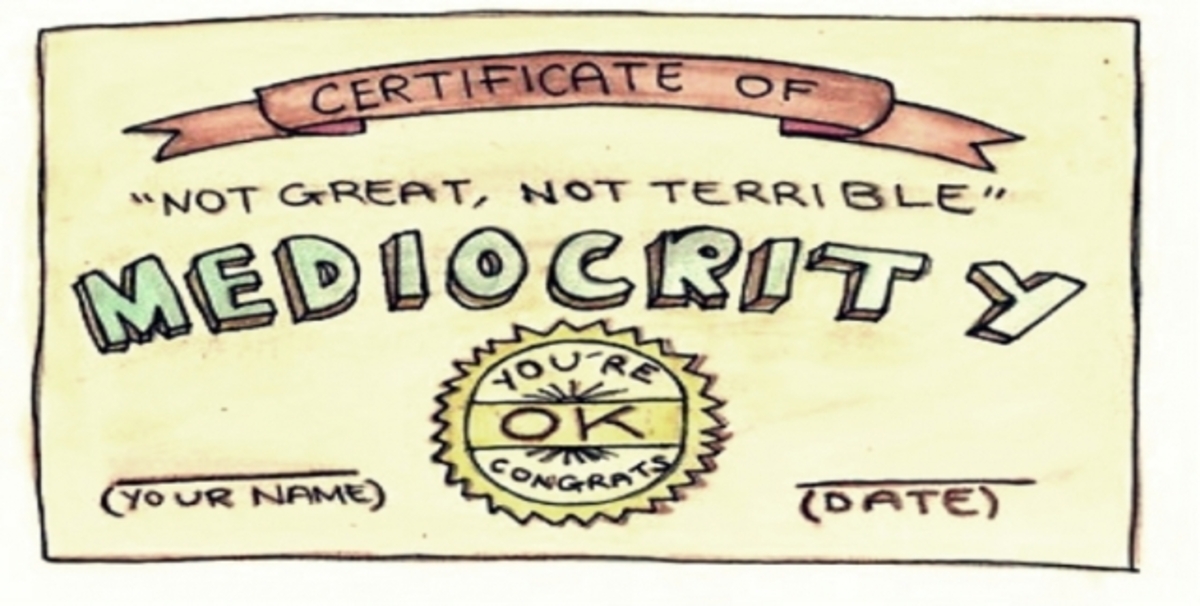 Why are we so terrible at being terrible? Many of us don't realize how rewarding it is to be just mediocre at something, the Wall Street Journal writes, citing psychology and behavioral science professor Thomas Curran. With highly competitive jobs, social media feeding us inaccurate “images of perfection,” and targeted marketing campaigns telling us that a specific product is going to help us excel in life, everyone is under tremendous pressure to always be brilliant or risk being shunned by society, Curran notes. The average level of social perfectionism — or the need to prove your flawlessness to others — rose by roughly a third between 1989 and 2016 among more than 41k college students, according to a study Curran led. But sometimes, “it's such a relief not to have to be good,” one publishing executive and admittedly terrible surfer says. Other laymen the Journal spoke with also cited a sense of “joy” in allowing themselves to be mediocre at different things, particularly hobbies.

Self-driving cars may not be possible without some help from humans after all: Startups in the autonomous vehicle industry have been found to frequently use human remote supervisors and human safety drivers, Reuters reports, citing consultancy firms and industry players. This indicates that fully autonomous vehicles may never be a reality — a premise that challenges the core idea promoted by AV startups that computers and artificial intelligence would drastically minimize accidents caused by human error. Robots need a helping hand from humans to face special circumstances, such as unexpected lane restrictions due to construction, or unanticipated actions of pedestrians or other drivers.

Eventually, humans’ role could be similar to air traffic controllers, supervising from hundreds of miles away, watching video feeds from several AVs and, in some cases, even equipped with a steering wheel, ready to intervene and get trapped robot drivers back on the road, according to the news wire. “I can provide my customers peace of mind knowing there is always a human there to help if needed,” said Kyle Vogt, CEO of Cruise, a General Motors-backed self-driving startup. “I don't know why I’d ever want to get rid of that.”

To upgrade or not to upgrade: Apple unveiled two iPhone 14 models and two 14 Pro models last week. If you’re wondering whether you should splurge for a new phone or stick to your old one, here’s a quick recap of the key features in the new models, whose price points are (shockingly) staying the same, despite soaring inflation, the Washington Post notes. The new models are getting a couple of new safety features including automatic car-crash alerts and SOS satellite services.

Say goodbye to the iPhone mini: Apple killed the least expensive iPhone model, which only lasted two generations and is instead releasing the iPhone14 Plus, which offers a larger screen and better battery life without the iPhone 14 Pro’s heftier price tag. It however looks pretty much the same as the iPhone 12 and 13.

A new design element: Both the 6.1 inch iPhone 14 Pro and the 6.7-inch iPhone 14 Pro Max are ditching the notch on the top of the screen for a new pill-shaped cutout, dubbed the Dynamic Island. But what exactly does it do? It makes use of the space around the front cameras and grows or shrinks as it gets filled up with new notifications or other information such as what song is currently playing.