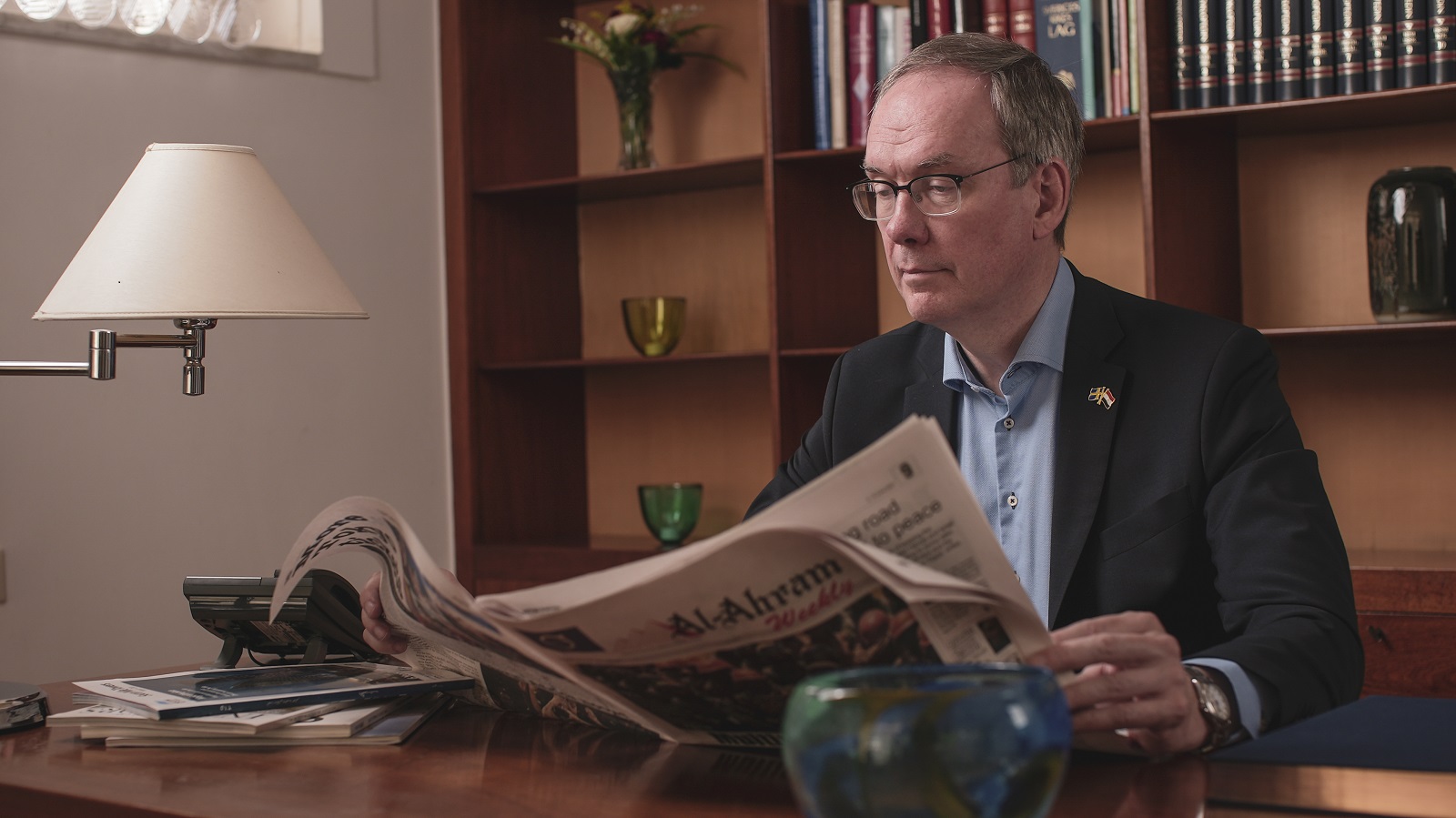 My name is Håkan Emsgård, I’m 61 years old, and I’m the Swedish ambassador to Egypt — a post I’ve held for a little less than a year. Prior to coming to Cairo, I was the head of the Foreign Ministry’s European department back in Stockholm, I served as Sweden’s ambassador to the Netherlands, and I’ve worked at the Finance Ministry and at an international financial institution. Altogether, that’s my professional background.

The basis of my job as the ambassador is to promote relations between Sweden and Egypt across all fields. Our relations are very good as it already stands: We work together on political, economic, and cultural issues. If you look back in history, there have been a lot of links between the two countries. Our royal family has been very engaged over the years in archaeological research — we have a Swedish-Egyptian archaeological mission that visited Egypt last autumn, and this is something we’ve been doing for many years but it deserves more attention than it has received.

Perhaps the focus at the moment is to boost our economic relations; there’s a strong interest now among Swedish companies in coming to invest in Egypt, particularly in sectors like energy, where Egypt has the ambition of becoming a regional hub. For example, a Swedish company is involved in the Egypt-Saudi electricity interconnection project, and there are plans to set up similar links with Greece and Cyprus so it’s very interesting for us to be partnering on that.

Where I really see a bright future for our relations is the health sector. Egypt’s introduction of its universal healthcare scheme creates lots of windows in the whole health sector. On the pharma side of things, AstraZeneca is already a very active partner to the Egyptian government, but we also have another company called Elekta that produces radiotherapy equipment. They’re now opening a regional office in Cairo to serve the region with this high-tech equipment. So I think this is an exciting way of bringing new, modern technology to Egypt — and it means that there won’t just be an investment but also the transfer and knowhow and technology from the company to Egyptian workers and the local market.

I’m lucky in the sense that I live very close to my office — about 100 meters [laughs] — so I can wake up relatively late. We usually start our day at the office at 9am, starting with a small internal meeting to go through our calendars and see what events are on the agenda. I also follow the news both in Egypt and in Sweden to make sure I’m updated on current events, so I read the Financial Times, New York Times, and the Economist. It’s important to know what’s going on in the region too with the political and economic situation. I often have lots of contact throughout my days — whether at lunches or other meetings — with Swedish companies and Egyptian authorities to sort out cooperation and troubleshoot issues.

We’re also working on becoming more active in the cultural world, so sometimes we have small events to promote Swedish films, writers, and the sort, which I think is important. My wife has been visiting, so we make it a point to have lunch together everyday here at the residence to spend time together, and then sometimes she is able to join me in my evening obligations.

I just experienced my first Ramadan and I realized that it’s a month during which you gain weight, rather than lose it [laughs]. But I really enjoyed the experience and the atmosphere, particularly the iftar gatherings with lots of food.

My days are often pretty long, because there are typically functions in the evening and often I have more than one invitation on the same day. I try to make a judgment call on where I can give and benefit the most to prioritize that invitation.

I like to wind down by reading. I read a lot about Egypt and particularly its historical developments. That includes ancient history but also modern history; fiction is also an important tool to help understand the culture. People’s mentality and how they think is often best portrayed in fictional works.

I’ve really enjoyed traveling around Egypt. My wife and I recently traveled to Aswan; we did the traditional Nile cruise and spent time at the famous Old Cataract Hotel. It was a wonderful experience and I hope I’m able to take more of these types of trips.

The biggest piece of advice I would give to somebody entering the diplomatic corps would be to have a little bit of patience with each new post. Take the time to formulate your own understanding and feelings for the job to figure out what’s going to work and what you can do. You have to reach your own conclusions about a lot of things, and once you do, trust your own judgment.