Meet Aly Eltayeb, CEO of the startup that wants to transform our streets — and help save the environment in the process 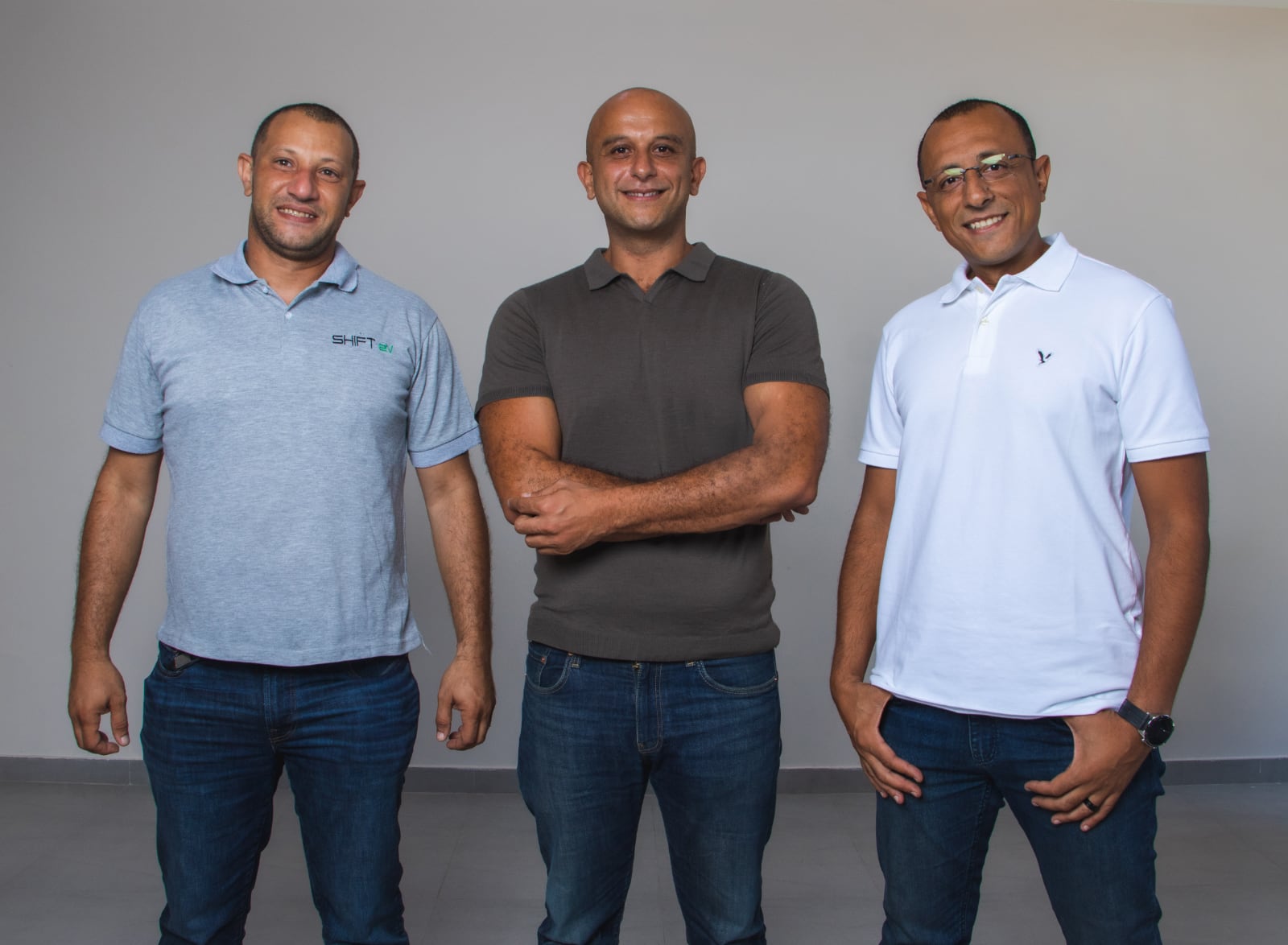 Electric mobility startup Shift EV has closed a total of USD 9 mn in funding, putting it on the road to transform the EV landscape not just in Egypt, but across emerging markets with home-grown battery technology. Cairo-based Shift’s Series A round was joined by existing investors Union Square Ventures, Algebra Ventures, and Wamda as well as first-time investor Oman Technology Fund, bringing the company’s total cash raised to date to USD 9 mn, according to CEO and co-founder Aly Eltayeb (LinkedIn).

The investment is the first in the Middle East and North Africa for Union Square, a tier-one US venture capital investor.

What does Shift EV do? Imagine being able to convert your full delivery fleet into EVs in a matter of days — at no up-front cost, all here in Cairo. The company, founded by young PhDs with global industry experience, has developed a retrofitting process based on proprietary Lego-like, locally manufactured batteries that can turn any conventional vehicle into an EV. Shift isn’t interested in converting any old car, though. Its October plant takes an assembly-line approach to convert fleets of minivans and tricycles and will soon do pickup trucks and microbuses— the backbone of Egypt’s last-mile delivery and passenger fleets — into EVs. It takes less than a few hours per vehicle to do the conversion, a figure Eltayeb says is “falling rapidly.”

How does it generate income? “We have a simple value proposition for logistics fleets: save 30% of your operating costs with no upfront charge,” says Eltayeb. “We have a subscription business model, a batteries-as-a-service approach.” They have a team of more than 50 people on the ground today.

We love Planet Startup, but it’s a rare Egyptian company that sets out to build something out of atoms, not bits. For all of his public pushing of the envelope, Elon Musk is alone among the so-called Paypal Mafia to have set out to transform the physical world in which we live.

Think of Shift EV in a similar way: It’s deep tech with massive real-world implications. It’s not localizing an idea (say, a marketplace / payments outfit / delivery service) that’s been proven to work abroad — it’s setting out to do something that’s never been done before. Ever. Anywhere.

We sat down for a pre-Ramadan chat with Eltayeb to discuss the company’s plan to dominate emerging markets, its origin story, and the future of climate — which we expect will turn out to be the biggest market in the world over the next 30 years. Edited excerpts from our conversation follow.

ENTERPRISE: Why did you set out to convert fossil-fuel-fired vehicles instead of building your own EVs?

The cost of a new electric passenger car is just stunning in emerging-markets terms. I mean, some are just beautiful pieces of angled, carbon-fiber art — but on a cost basis, they don’t yet make sense. Big global startups such as Tesla and Rivian will spend a decade making money selling high-priced passenger cars in the United States, Europe and China. They’re markets where both personal incomes and government subsidy budgets exist on a scale that can make EVs attractive.

Think about it. At the price of a Rivian [starting prices in the US are the equivalent of EGP 1.3 mn apiece), they’re luxury items for consumers — and they’re certainly not going to be moving packages or groceries around Giza anytime soon.

Big global players will spend the next decade eating up market share outside EM before they’ll start to wonder whether costs have come down enough to build affordably for emerging markets consumers.

But the cost of retrofitting? It turns out that it’s a fraction of the cost of a new EV — and it’s a cost that can be financed. Our customers own fleets of vehicles. They pay nothing to convert them — and they get 30% savings immediately. They love that.

Why did you guys start with commercial vehicles when there are significantly more passenger cars on the market?

If you’re a car owner, you know where you’re going to go most days and where you’ll charge — but 10% of the time you need the flexibility to go anywhere and charge anywhere. There’s very little of what when it comes to commercial vehicles: You know exactly where you’ll start, where you’ll end, and what your daily range is — meaning there’s no need to rely on public charging infrastructure.

Last-mile delivery is a killer application for electric mobility.

E: And the market is big enough?

ELTAYEB: There are at least 25 mn commercial vehicles on the roads in emerging markets and 1.5 mn in Egypt alone. The implication is that we have two options: Wait a decade or two during which we emit CO2 like crazy, over-spend on operational costs, and continue to destroy the air quality of our cities. Or find a different option.

E: What was the signal that the time was right for you guys?

When we started looking into this in 2019, batteries were down an order of magnitude in cost. It’s the same thing that happened in semiconductors and then in solar panels. And we knew that both global capital and governments are keenly looking at the transition from conventional vehicles to EVs.

We went around the world looking for lessons learned from people who had tried to build businesses around conversion and found they failed for two reasons: The batteries were too expensive in the absence of subsidies — and they took existing tech and tried to ram it into vehicles just to make it fit, making terrible design tradeoffs in the process.

So we knew we had to do something different. We had to make batteries that are designed from scratch to fit existing chassis. That’s what lets us move at industrial scale and automotive speed.

E: Tarek Assaad at Algebra likened your tech to Lego: You pull the engine and drive train, then snap together a battery package out of Lego-like blocks that make optimum use of the engine compartment.

ELTAYEB: That’s a beautiful way of putting it. Our process starts with a specific chassis platform. We don’t want to do bespoke work — you need to work at an industrial automotive rate when you convert a fleet. It’s not one big battery, but rather smaller modules like Lego packs that we combine in different sizes, form factors and voltages — all of it unique to each chassis platform.

E: How do you make money?

ELTAYEB: The short answer is that it’s a subscription model: We convert your vehicles. You save money. We take a piece of the savings.

And what’s really exciting is that in the process, we’re creating a new asset class. Going from gasoline to EVs at the fleet level needs a new type of renewable energy finance that’s distinctly different from the facilities that financed the switch from coal to renewables. We’re lining up transactions now with big development finance institutions, climate funds, commercial banks and leasing companies. We’re also getting traction with equity investors who can deploy debt.

E: What’s the biggest challenge you guys have faced building a manufacturing business in Egypt?

ELTAYEB: It’s certainly not government policy. We’re in line with government goals on FDI, mobility and electrification, and that’s helped a lot. We’ve gotten a lot of support from government institutions. We’re certified as safe and road-ready by the main regulatory bodies and there’s a lot of credit due to the ministers of industry and finance. They’re being really forward-thinking and progressive in how they’re helping build a local EV industry.

One of our biggest challenges was dealing with the China container crunch. We had huge issues getting our stuff to Egypt. It was like something from a comedy: Ex-Intel, GM, and MIT people trying to move stuff from port to port around the world, trying desperately to find a way to get it to Egypt.

Another interesting challenge is that there’s not a lot of capital out there in the world looking to invest in technology in Egypt. New tech investors go to Munich and Boston and San Francisco.

Luckily for us, we met Albert Wenger from Union Square and the teams at Algebra and Wamda and the Oman Technology Fund. What we’re doing is really different, but they understood what we were doing and put their money where their mouths were despite it being so unusual to fund deep tech in Egypt. Other investors were super-excited, but kept coming back to “Why Egypt?” We wanted to show that you can do this in Egypt.

E: What’s next for you on the fundraising front?

We’re far beyond the “Why Egypt’ questions, I think. For our next round we’ll be raising capital to go regional and we’ve had a great set of larger scale investors that are lining up to write much bigger cheques.

ELTAYEB: My co-founder and CTO, Amr Helmy (LinkedIn) have known each other for about 20 years. We share a best friend, which is a great way to get to know someone well enough to start a company with them. And we both went to Cairo U before getting PhDs abroad, so we have a lot of shared experience.

In 2019, we started asking a question the sent us down the rabbit hole: Why aren’t there EVs everywhere in Egypt? Across emerging markets? I was coming from Form Energy, a US battery startup founded by the former vice-president of Tesla — Form raised USD 350 mn in capital — and Amr had a really promising career on the faculty at Zuweil University. He’s a PhD in semiconductor design from Grenoble University and an alumnus of Intel. Our vice-president of engineering, Sherif Nassef (LinkedIn) was VP of manufacturing at GM and then worked with Schneider Electric.

To this day, one of our biggest successes as a business was convincing Sherif to join us last year after a decade at GM, where he led engineering and manufacturing on so many vehicles dominating Egypt before he managed the expansion of Schneider’s manufacturing facilities in Badr City.

Shift has one of those Silicon Valley-style garage origin stories: We literally started in the corner of a friend’s warehouse.

E: And you? Where were you before Shift?

ELTAYEB: I have a PhD in chemical engineering from MIT and led business development as employee number eight at Form.