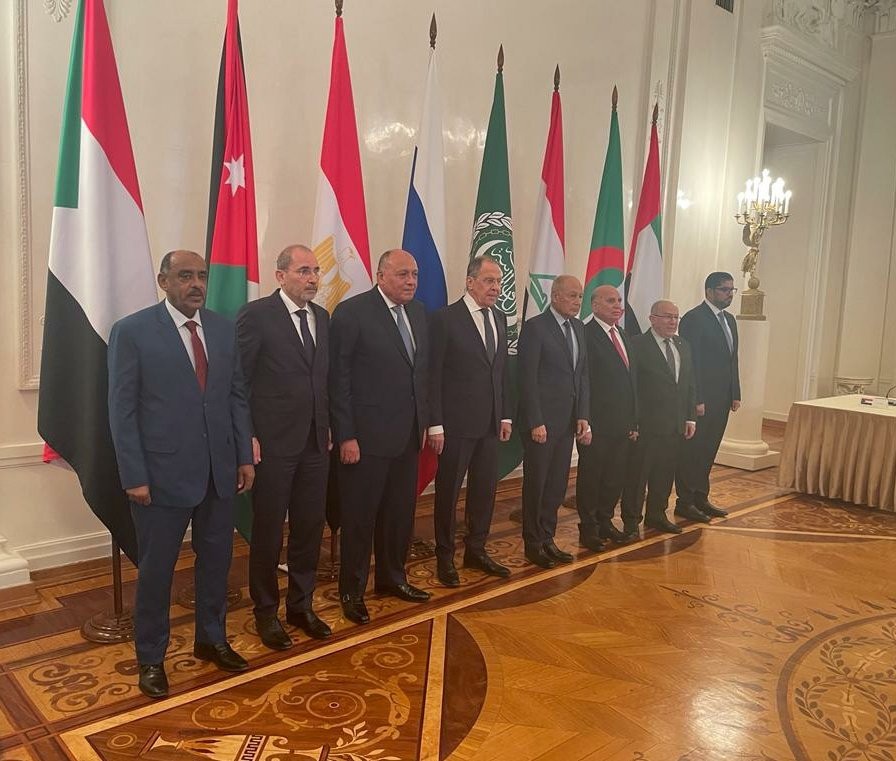 The Arab League is trying to negotiate peace for Ukraine: An Arab League delegation including Foreign Minister Shoukry said at a press conference in Moscow yesterday (watch, runtime: 26:21) that it had offered to mediate ceasefire talks between Russia and Ukraine. Russian Foreign Minister Sergey Lavrov met with the delegation — which also includes Shoukry’s Algerian, Jordanian and Sudanese counterparts as well as Arab League Secretary General Ahmed Aboul Gheit — for talks ahead of the presser.

The AL drive aims to broker a ceasefire between the two countries and work out a number of confidence-building measures, Shoukry said. The delegation also spoke with Lavrov about the need to ensure the safe exit of Arab citizens from conflict areas and mitigate fallout from the conflict on third countries, he added.

What does the war have to do with the Arab League? It’s the economy, stupid. The Arab push for peace was triggered by pressure the war is putting on global food and energy markets, Shoukry said at the presser. “Our efforts stem from our awareness of the seriousness of the crisis in Ukraine and its negative repercussions on various economic levels, such as global energy and food security,” he said.

Lavrov used the presser to reiterate Russian claims that images of alleged war crimes coming out of Ukraine are fake, saying that Russia is the victim of a misinformation campaign. “Ukraine should forget the idea of ​​joining NATO,” he added, reiterating a call for Kyiv to declare neutrality.

The delegation will head to Warsaw today for talks with Ukrainian Foreign Minister Dmytro Kuleba, according to a statement.

REMEMBER- Russia and Ukraine are two of our biggest friends, and we’d like it to stay that way. The two countries together supply the bulk of our imported wheat and are key markets for inbound tourism.

THE WAR IN TOURISM-

Russia is making it easier for its citizens to fly to Egypt and other “friendly” countries… The country will lift all remaining covid restrictions on flights to 52 “friendly states” including Egypt from this Saturday, state news agency TASS reported citing Prime Minister Mikhail Mishustin. Algeria, Bahrain, Jordan, Iraq, Kuwait and Lebanon also made the list.

…and harder for Europeans to visit Russia: Russia is suspending simplified visa procedures for some European Union countries, as well as Norway, Switzerland, Denmark and Iceland, which it deems “unfriendly,” Reuters reports, as a response to sanctions placed on Moscow over Ukraine. The move is largely symbolic, given that Russian airspace is already closed to European airlines.

Biden says “war criminal” Putin should be put on trial + promises more sanctions: “You saw what happened in Bucha … he [Vladimir Putin] is a war criminal,” US President Joe Biden told reporters yesterday, responding to reports of executions of unarmed civilians and other atrocities allegedly committed by the Russian military against Ukrainian citizens in western Ukraine. Biden called for the Russian president to face a war crimes trial and said the US would soon announce more sanctions against Russia.

The massacre in Bucha prompted France to call for a ban on Russian coal and oil, with President Emmanuel Macron leading the charge (though he was silent on all-important gas, as the Financial Times points out).