2021 was a bumper year for emerging market venture capital funding 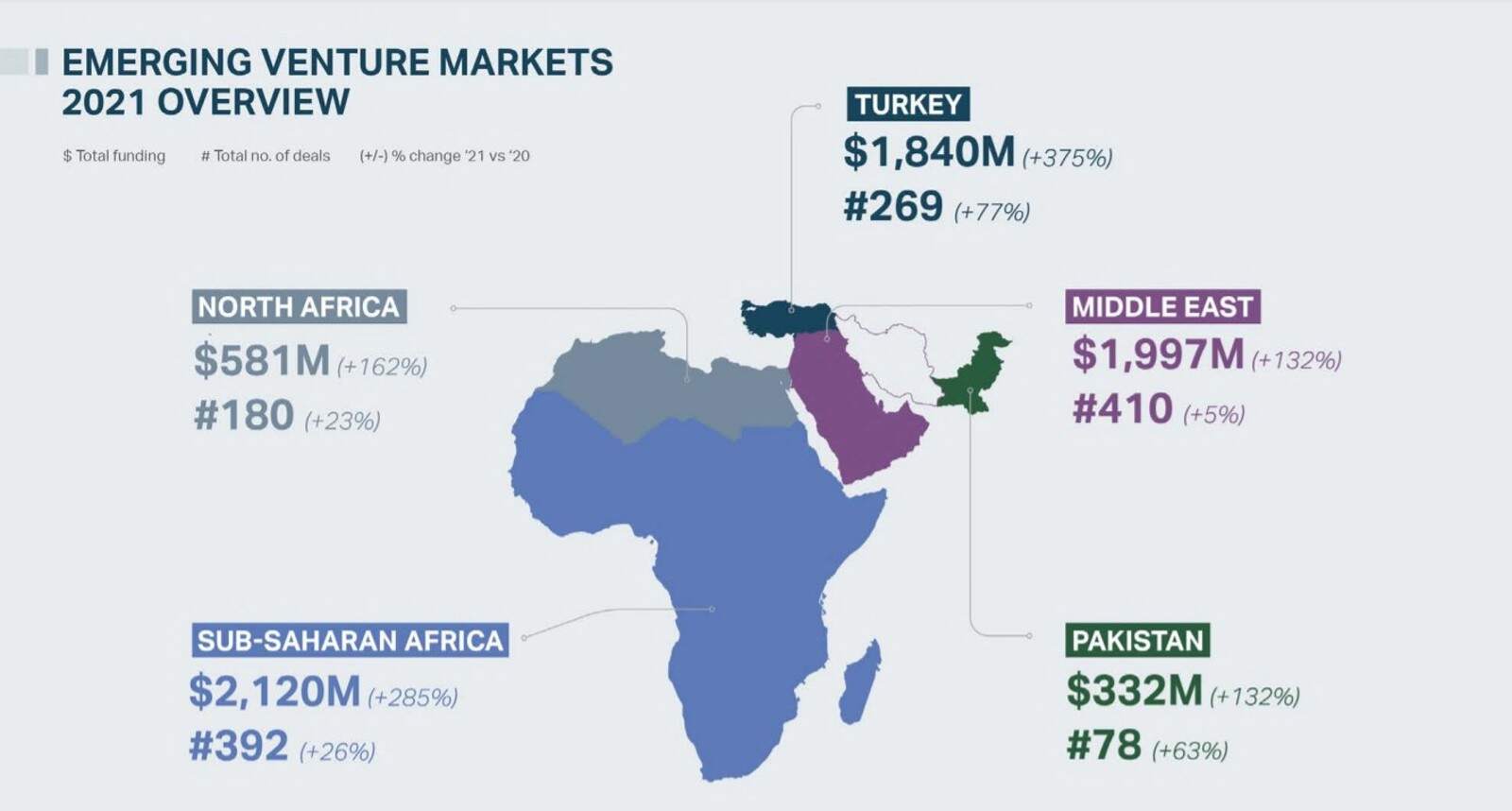 2021 was a bumper year for EM VC funding: Among emerging markets, 2021 saw soaring increases in the number of venture capital agreements signed and the sheer scale of funding channeled into startups, according to Magnitt’s recently-released 2022 State of Startup Funding Report for Emerging Markets (pdf). Records were smashed across the board in the Middle East, North Africa, Sub-Saharan Africa, Turkey and Pakistan — the markets reviewed by Magnitt.

The bottom line? 2021 saw a 228% y-o-y increase in EM VC funding, which came in at USD 6.9 bn, according to the report. Every quarter in 2021 saw more funding and agreements signed than any other previous quarter recorded, the report notes.

How did Egypt do? Last year, Egypt’s startups locked down somewhere between USD 373-502 mn. Many startups don’t publicly disclose precise data about their investments, we noted.

And among active investors in EM-based startups, Egypt’s Flat6Labs tops the scoreboard: Out of the ten most active VCs, accelerators and angel investors targeting EM-based startups, Flat6Labs leads the pack, having closed 51 investments in 2021 — 22% of which were in the Middle East and 78% in North Africa, Magnitt reports. It’s followed by US accelerator Y Combinator, which made 34 investments — the majority of which (53%) went towards Sub-Saharan Africa, followed by 29% in North Africa. The UAE’s Global Ventures came in sixth, having made 23 investments — 57% in the Middle East, 35% in North Africa, and 9% in Sub-Saharan Africa.

At the MENA-wide level, 2021 VC funding rose 138% y-o-y to exceed USD 2 bn: This was driven by increased appetite from regional and international investors, the Magnitt report notes.

Interestingly, five of 2021’s ten most active investors in MENA startups were headquartered in KSA, Magnitt tells us.

And the region saw a record number of exits, which more than doubled between 2020 and 2021: 35 exits were announced across MENA in 2021, 11 of which were announced by UAE-based ventures, Magnitt notes. This is up from 16 exits in 2020 and 11 in 2016. The high number of exits “validates the market for investors,” the report adds.

Many trends identified in MENA are also being seen in the broader EM region — including more agreements, more fintech, and more exits: Over 1.3k agreements were signed in total in 2021 — a 27% increase over rounds closed in 2020. Fintech saw the lion’s share of investment among EMs overall, with fintech startups landing 21% of agreements signed and 31% of funding awarded. And altogether, 87 startups announced exits — over double the 41 exits announced in 2020 — which is “a sign of increased liquidity,” Magnitt notes.

Among the EMs reviewed by Magnitt, 2021 saw mega-rounds taking center stage as never before: Agreements worth USD 10 mn made up 8% of total agreements signed by startups in these EMs — their highest ever share. And a record 12 agreements worth USD 100 mn or more were signed — up from the previous record of three, in 2019 — with four of these closed by startups based in Turkey, the report notes. This indicates a shift by investors towards late-stage investing, Magnitt tells us.

Still, let’s not forget it’s all a drop in the ocean compared to global VC investment, which exceeded USD 675 bn in 2021: Globally, total VC funding last year doubled 2020’s all-time high, CNBC notes. US startups saw funding of USD 328.8 bn, while Chinese startups raised some USD 61.8 bn, compared to USD 39.8 bn awarded to startups in the UK. “But VC investment in the UK and Europe is growing faster than it is in the US and China,” CNBC adds.