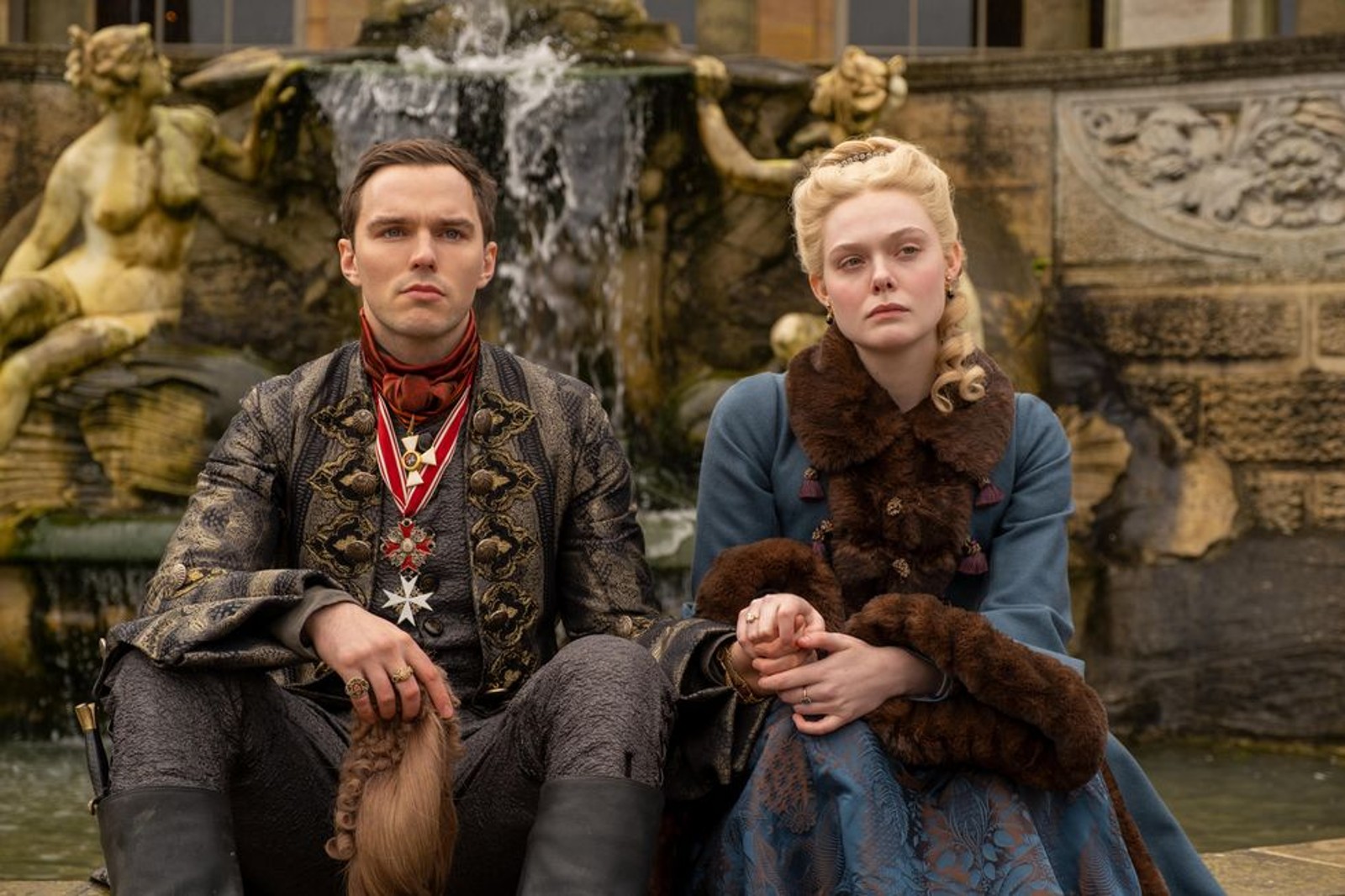 Russian history isn’t exactly famous for its comedic value. But what if it were? Historical comedy-drama The Great doesn’t stake an especially strong claim to truth, billing itself in the opening credits as “an occasionally true story.” It charts the rise of one of modern history’s greatest female monarchs — Catherine the Great (played by Elle Fanning) — from her arrival in Russia as a wide-eyed princess set to be wed to the daft and detestable Prince Peter (played by Nicholas Hoult), to her eventual rise to the throne. Spending his days between drinking himself silly and shooting bears for sport, Catherine quickly realizes Peter is unfit to rule and hatches a plan, along with a few royal allies, to usurp the throne. The real life Catherine the Great was known for being a champion of the arts, reinvigorating Russian cultural life and promoting education for the masses — one of the few traits the fictional version of her in the show shares.

Not a show for the faint of heart: The series is a delightful romp through Russian history — rife with palace intrigue, witty dialogue, and absurd turns of events — and really plays up the debauchery of royal life in the 18th century. A word of warning: The show is in no way PG friendly, and is not for the easily offended; profanity, innuendo, and cruelty for the sake of comedy are as common as the powdered wigs worn by the drunken revellers who populate most scenes. The first season of the show is available to view on OSN play, with the second season set to drop on 20 November.

⚽ Egypt is currently on the field against Gabon, having started their World Cup qualifier match at 3pm at Alexandria’s Borg El Arab Stadium. As of dispatch, Egypt is ahead 1-0 after Magdi Afsha got one past the goalie in a penalty shot.

In Group D, France and Finland are taking the field. France has already secured its place for Qatar 2022, but today's match is a chance for Finland to secure its ticket to the playoffs. Meanwhile, Ukraine is playing against Bosnia and Herzegovina with the hope that they’ll come out on top and beat Finland for a playoff spot. France is in first place with 15 points, followed by Finland with 11 points, then Ukraine with 9 points, then Bosnia with 7 points.

In Group E, Belgium also booked its place in the next World Cup, so while today’s faceoff against Wales has a foregone conclusion, the latter will play with the aim of expanding the point difference with the Czech Republic. The Czechs are playing a life or death match against Estonia today as they aim to collect three points and secure as many goals as possible, while waiting for Wales to stumble against Belgium. Belgium currently leads with 19 points, followed by Wales with 14 points, then the Czech Republic with 11 points.

In Group G, The Netherlands is in the lead with 20 points. The battle between Turkey and Norway is intensifying with both tied at 18 points and Turkey ahead by only one goal. The Netherlands will host Norway in a high-stakes fiery match while Turkey will compete against Montenegro.

Burgers, tacos, and churros — this place has it all: Hush Burgers & More in Heliopolis brings the classic burger joint menu and aesthetics and perfects them. You can’t go wrong with any of their burgers, all of which are similar except for the number of patties you’d like to stack. They also serve a crispy chicken sandwich and a vegetarian burger for those who’d rather opt out of meat. Their taco options are just as simple, choosing between chicken or minced meat, while appetizers include nachos and a fried potato skin bowl. Hush will be a hit for those who find themselves lost when presented with a lot of menu options — plus the place is great to just relax with a group of friends, a burger, and a drink.

The Vienna Philharmonic are coming to Egypt, led by world-renowned Italian conductor Riccardo Muti. The event will take place next Sunday, 21 November at the City of Arts and Culture Hall at the new administrative capital. Tickets are available for sale on TicketsMarche.

It’s still a ways away, but we can’t help getting excited about comedian Russell Peters coming to Egypt with two shows next month. Peters will be performing on 17 and 18 December as part of his “Act Your Age” tour, which looks at cancel culture, aging, and the current state of the world. Details about tickets have not yet been announced, but they should start going on sale next week. If you don’t already know who Peters is, check out his stand ups on Arab Men and Language Barriers — two of our favorites.

Remembering a leading light of Arabic literature in translation: We were very sad to hear that leading British translator Humphrey Davies passed away this week at the age of 74. A graduate of AUC’s CASA program for Arabic, Davies put down deep roots in Cairo over the many decades he called the city home. His projects took in an impressive sweep, from medieval manuscripts to modern novels, and are lauded for their creative flair and their ability to faithfully convey the feel of the original Arabic. “For my generation, Humphrey was The Translator. A stand alone cultural machine who loved what he did,” writer Khaled al-Berry told ArabLit.

Where to start in the Davies canon: Among Davies’ best known works are his translations of Alaa Al Aswany’s The Yacoubian Building, four novels by Elias Khoury including Gate of the Sun, and much of the work of Naguib Mahfouz. For something a little more contemporary, try al-Berry’s Life Is More Beautiful Than Paradise, or Aziz Mohammed’s Kafka-inspired The Critical Case of a Man Called K. For history buffs and lovers of Downtown Cairo, Davies’ and Lesley Lababidi’s Field Guide to the Street Names of Central Cairo opens up new perspectives on some of the city’s oldest streets.